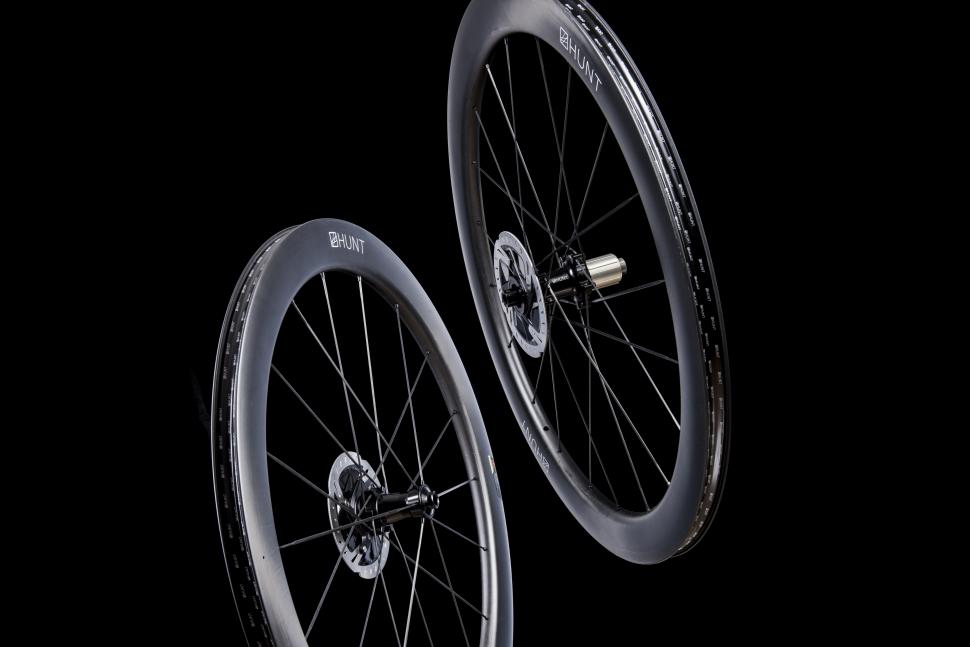 Launching today is a new wheelset from Hunt, the UD Carbon Spoke Disc. Well, two wheelsets in fact, because the new wheel is available in 44mm and 54mm rim depths. Well, actually three wheelsets because you can have a mixed set too, with a deeper rear rim. All clear?

The UD Carbon Spoke Disc has a particular selling point. Can you guess what it is? If you said, “carbon spokes?” then give yourself a pat on the back. The new wheel uses a unidirectional carbon spoke technology which makes the wheels laterally stiffer, reduces vibration transmission and results in a lighter wheel because less spokes are needed.

We first saw the carbon spoke tech back in November and it’s clever stuff. Hunt didn’t want to build a carbon-spoked wheel with bonded spokes where you can’t tweak them if they run out of true. The solution it has used is quite simple and elegant: each spoke is fitted with an aluminium mandrel at each end during the production process, which is pulled into place. The spoke is tapered – it’s thicker at the ends – so the mandrel locks into place without any need for bonding. The spokes are trued at the hub in a fairly traditional fashion, although you do have to take the tyre and rim tape off because the nipple is internal. The square taper section at the rim that looks like a standard nipple is just so you can hold the aero spoke straight while you tweak the tension. Hunt says that the carbon spokes have a higher tensile strength than their steel counterparts, able to withstand a load of 450kg per spoke compared to around 300kg for a quality steel spoke. They’re also stiffer, which means that the spoke count of the wheel can be reduced (20 at the rear and 18 in a 2:1 configuration at the front for this wheelset) but the overall wheel is still 6% stiffer than the nearest comparable steel-spoked wheelset.

On top of that, carbon is better at soaking up road chatter, says Hunt.

“Carbon-fibre composites exhibit a frequency dependent loss coefficient that is well tuned to absorbing high frequency 'road buzz' when compared to steel”, they claim, and apparently the feedback from the pro riders using the spoke technology – Canyon dhb use the rim-brake version of this wheel – is that the wheels do feel a bit more comfortable, all other factors remaining the same.

If you're worried about the spokes breaking if some wag sticks their pump in your wheel then don't be; Hunt has apparently tested the wheels with the most stringent intrusion protocols – ones that aren't used anymore – and they came out better than steel-spoked wheels would. 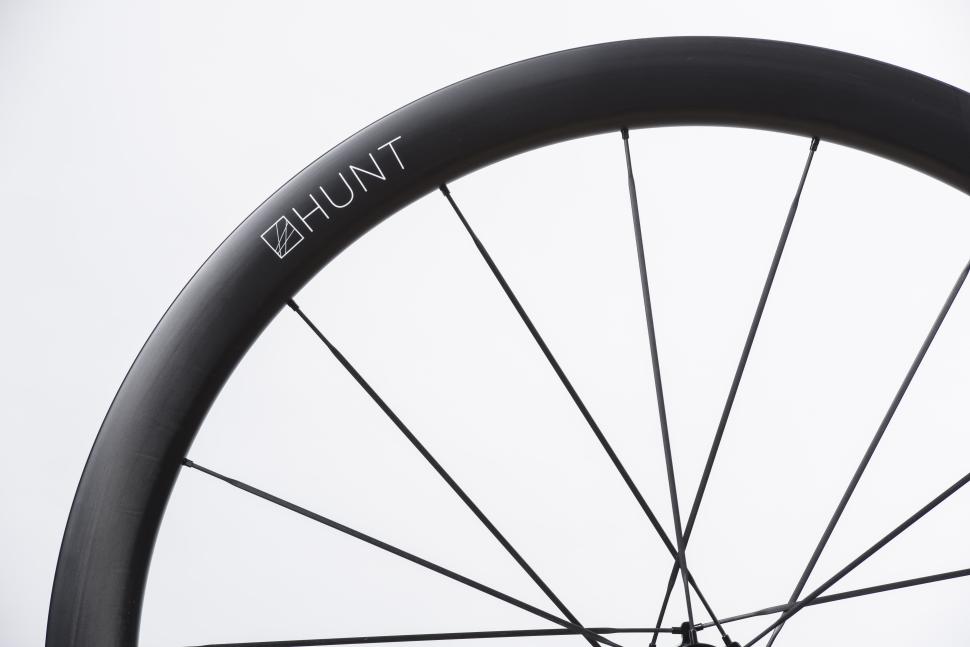 Not quite as aero, but still aero

These carbon spokes are chunkier than a bladed steel spoke and as such they’re not as aerodynamic, although there are less of them.

Hunt told us that aerodynamics wasn’t the key factor in the design of this wheelset, but that hasn’t stopped it from making a wheelset that’s competitive. As with nearly all modern aero wheelsets, Hunt has opted for a wide, bulbous rim profile that's tubeless-compatible; these wheels are optimised for a 25mm tyre and have a 20mm rim bed.

The 54mm rim bulges out to 29.5mm in width from 26mm externally at the bead. It’s not quite as extreme a profile as Hunt’s Limitless wheelset, and as such it isn’t as aerodynamically efficient overall, but the wheels are not far off, and Hunt’s own testing has the 54mm performing slightly better than a Zipp 303NSW, with the 44mm slightly worse. 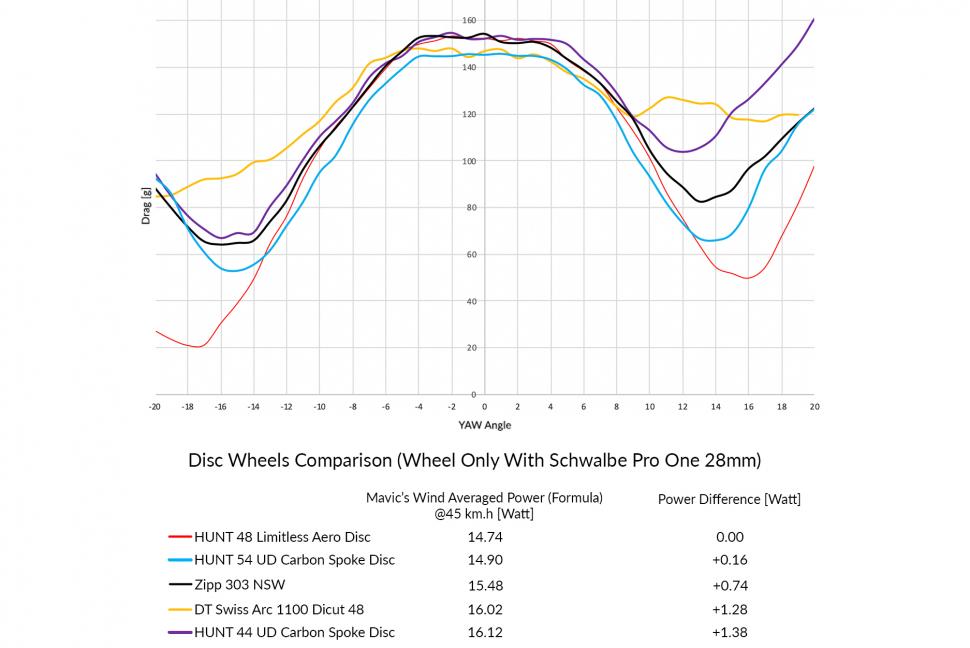 The Zipps are more or less twice the price of these Hunt wheels, though. At £1,069 for the 44mm wheels and £1,089 for the 54mm rim, the UD Carbon Spoke Disc wheels are certainly competitive. On top of that Hunt is offering these wheels with a new crash warranty replacement scheme called H_CARE. Basically, on top of the standard warranty the first owner will also get free crash replacement for the life of the wheels. H_CARE is also being offered on the Carbon Aerodynamicist rim brake wheels, the 36 UD Carbon Spoke rim brake wheel and the 48 Limitless Disc wheels. 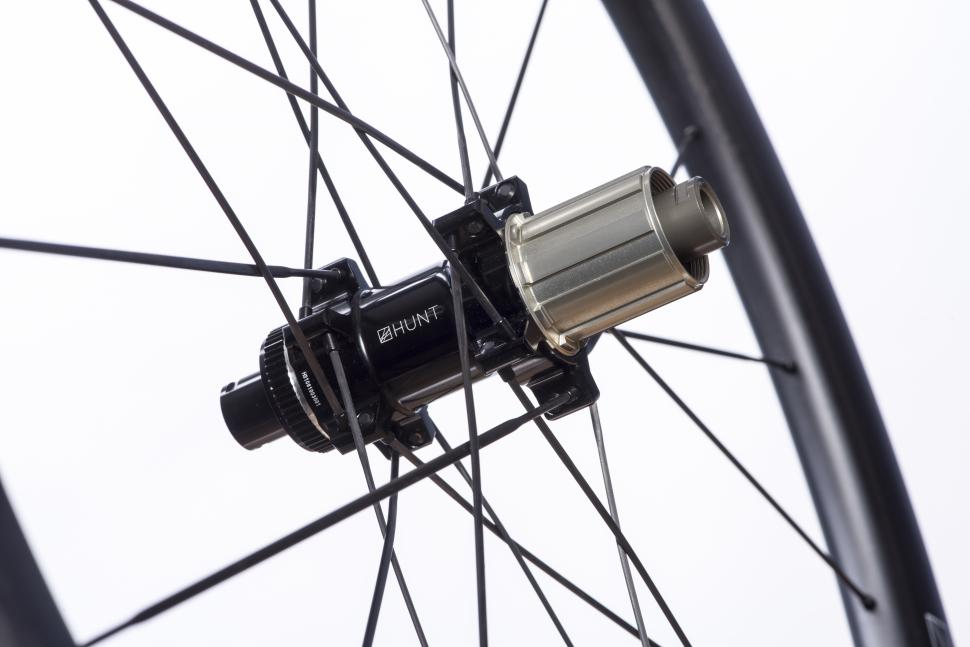 1
Team GB says Denmark Olympic team pursuit squad should be banned over use of medical tape on legs and "aerodynamic undervest"
2
Win with Shutt Velo Rapide! Cycling kit worth £510 up for grabs in our latest huge competition
3
Adidas’ radical-looking 3D CMPT glasses are super-light... and super-pricey
4
Cycle safety in focus as Highway Code changes revealed, including setting out hierarchy of road users
5
BMX racer Connor Fields out of ICU after suffering brain bleed in horror crash at Tokyo Olympics
6
Patrick Lefevere says Sam Bennett returning to Bora is like 'women who return home after domestic abuse'
7
Couple in hospital after they both crash in huge pothole
8
'Traffic is not a force of nature' Boris Johnson praises success of Low Traffic Neighbourhood and cycle schemes