The team from Hunt Bike Wheels came and visited road.cc HQ the other day to show us what they've been up to lately... and it's a lot. Here are some of the highlights that have either just been included in the range for the first time or will be added soon.

The TT Disc is a new direction for Hunt (we're talking about a disc wheel as opposed to a wheel for disc brakes). This is a tubeless version of a tubular prototype that was ridden to podium finishes by the Tanfield brothers at this year's British time trial championships (Harry Tanfield finished second in the seniors, Charlie Tanfield won the U23 title). 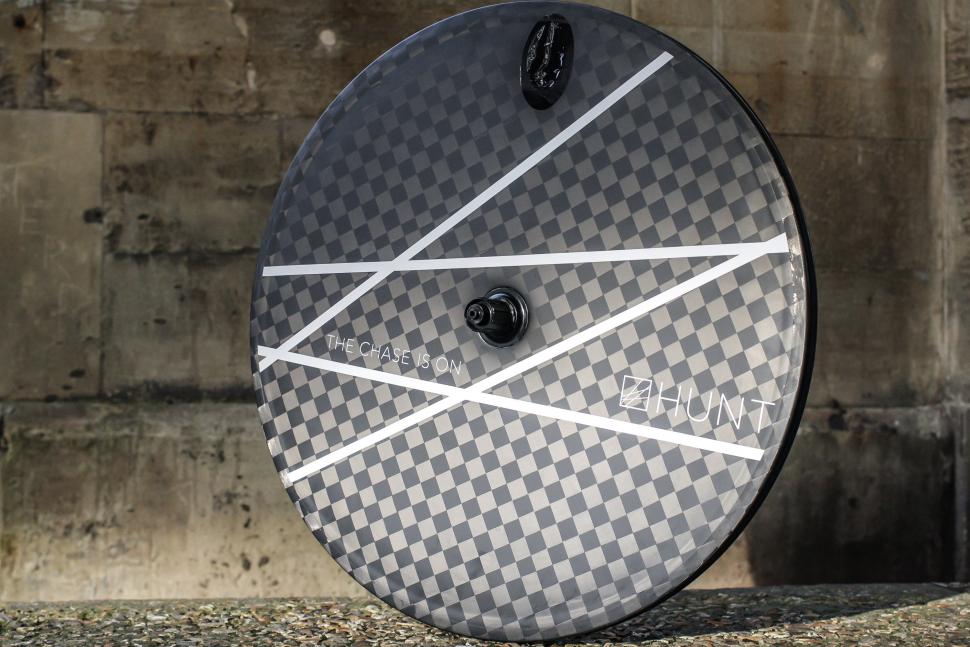 Hunt hasn't taken the TT Disc to the wind tunnel yet although Harry Tanfield has done some velodrome testing with the Huub Wattbike team and reckons it puts in a strong aero performance. Hunt will soon take it to the GST (Gesellschaft für Strömungsmeßtechnik) wind-tunnel in Immenstaad am Bodensee, Germany, to find out for sure. 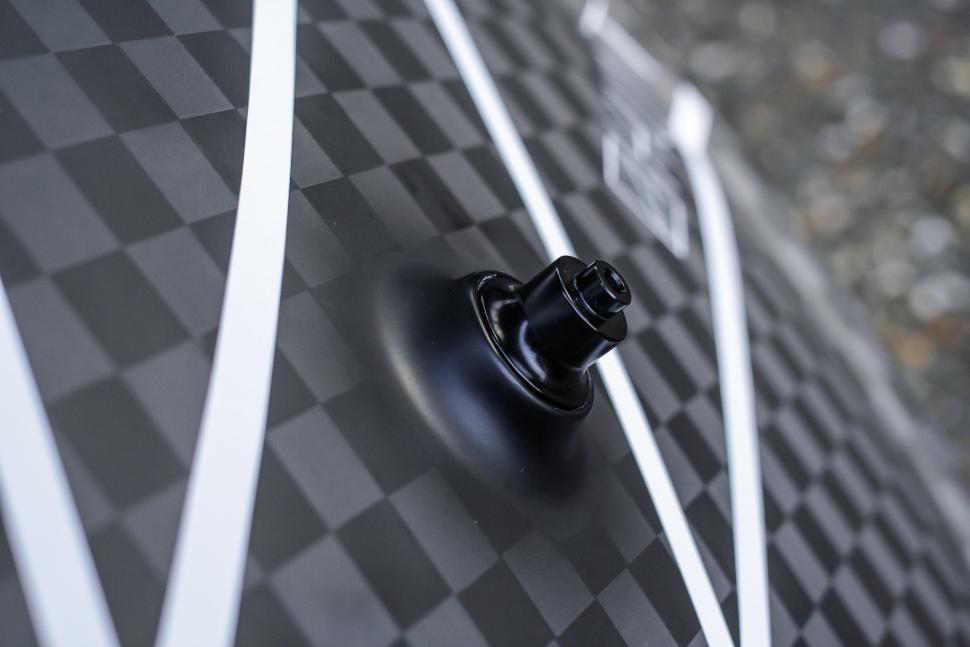 Assuming wind tunnel testing goes well, the TT Disc — which weighs 1,187g — will be available to pre-order before Christmas for delivery in March or April 2019. No RRP has yet been set, but you can expect it to be around the £1,000 mark. 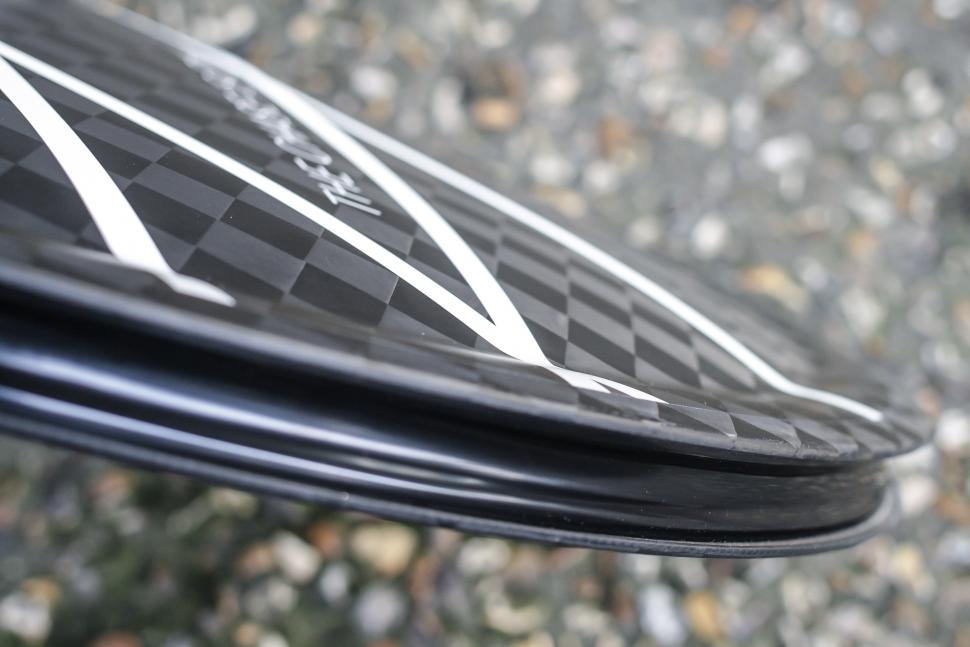 A disc brake version will be available at a later date. This is a product that's still very much under development, featuring some interesting new tech from one of Hunt's partners. 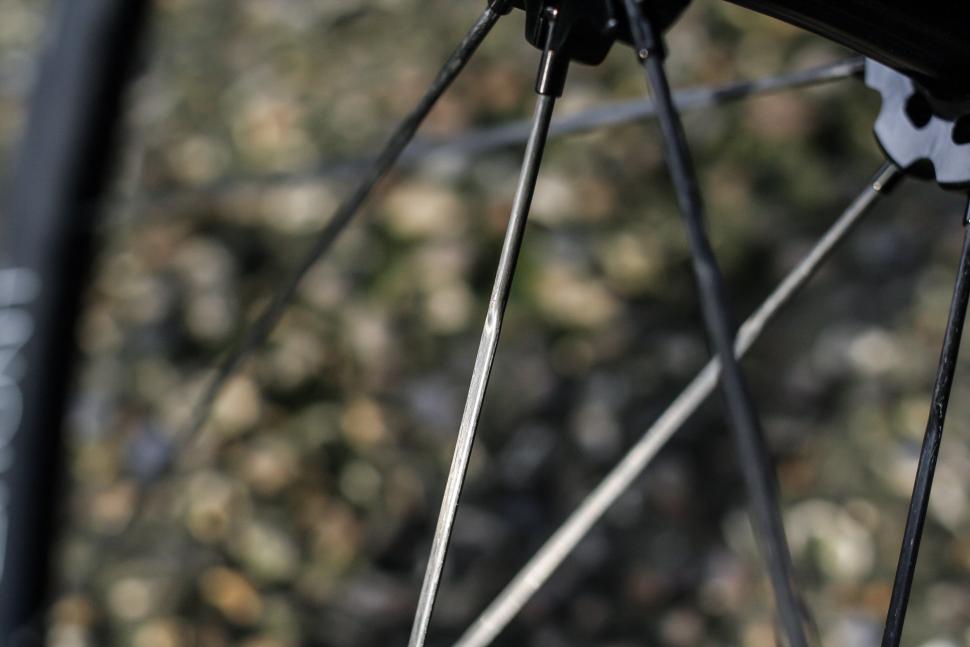 The straight-pull spokes used here are made from unidirectional carbon and each one weighs just 3.2g all in. For comparison, a Sapim CX-Ray or a Pillar PSR X-TRA 1420 spoke weighs around 4.3g without a nipple. That's a small saving but it's multiplied by the number of spokes in any particular wheel. 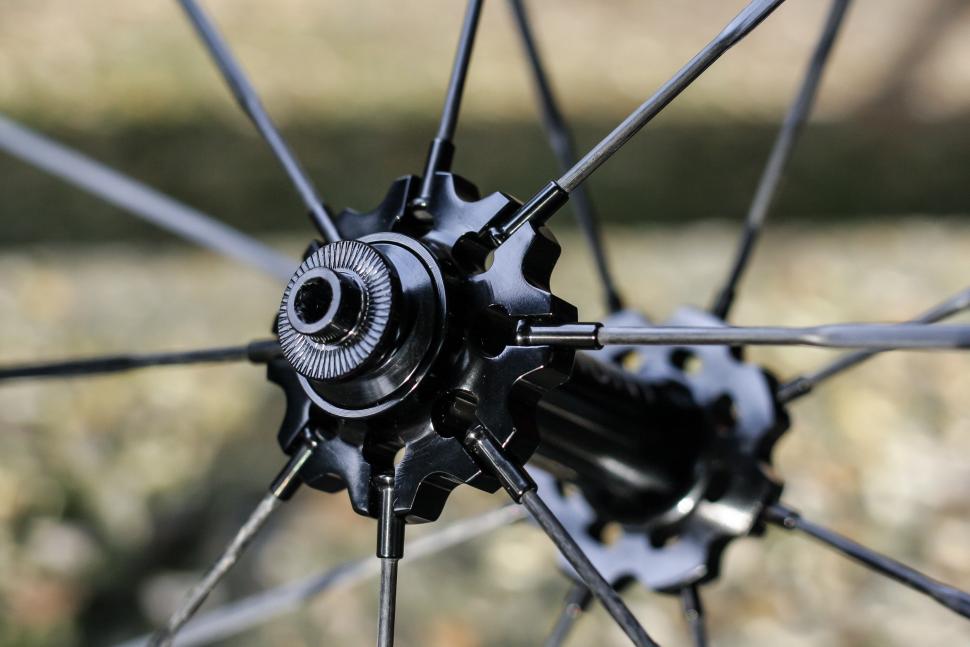 An alloy head is added to the carbon spoke when it is formed, a flared profile towards the end of the spoke holding this head in place (so it doesn't need to be bonded).

A nipple is added to the other end of the spoke, again when it is formed so no glue is required to hold it.

So how do you tighten everything up? You access an internal nipple via the rim bed, adjusting it with a hex — so your tyre and inner tube must be removed.

Hunt says that the spokes have a load limit of 300 kilogram-force (kgf) whereas the usual maximum build force of a carbon rim is 125kgf. 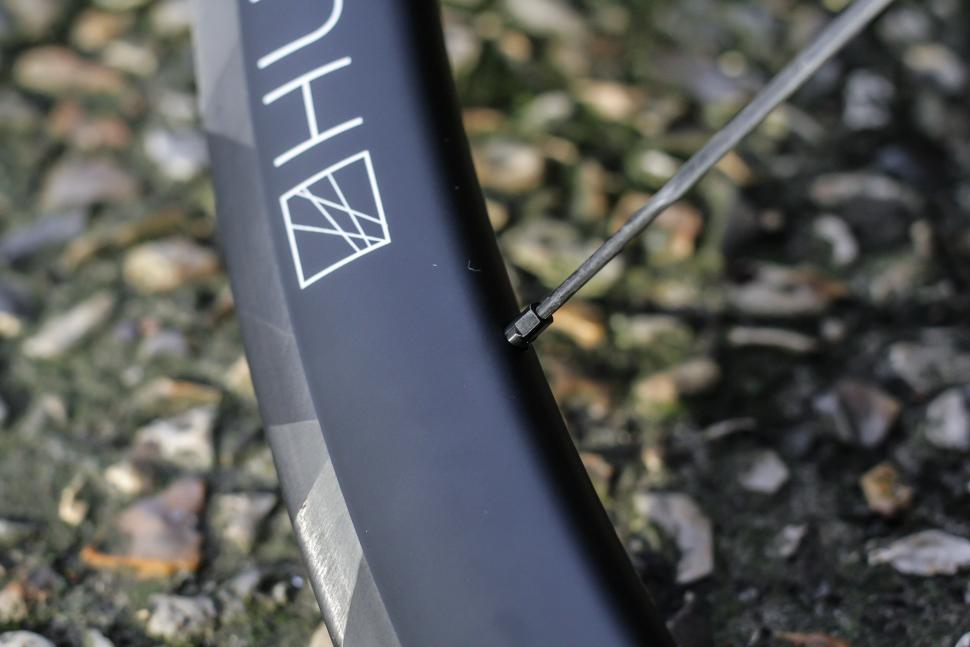 Rather than comprising various sheets of pre-preg carbon fibre, the rim is filament wound, meaning that during production a continuous length of carbon fibre is wound around a mandrel. Several other companies already make filament wound rims, claiming that it adds a higher consistency to the manufacturing process, improved performance and increased durability.

Although the spoke technology will not be exclusive to Hunt, the brand hopes to be the first to bring it to market and that could be in early 2019, although no date has been set. Pricing has yet to be finalised. 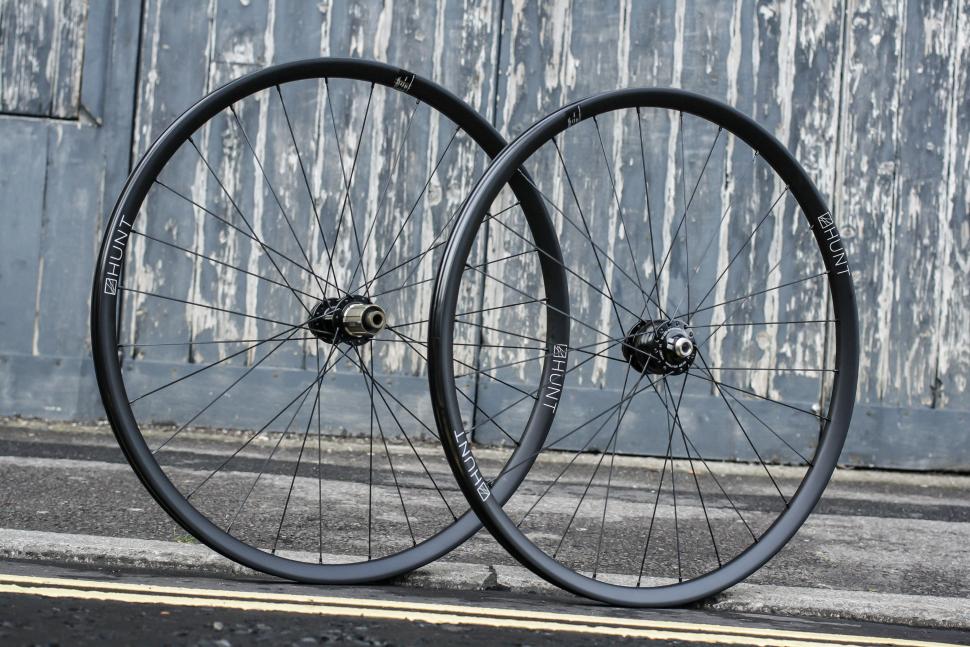 Hunt already offers 700C dynamo wheelsets in alloy and carbon and a 650b in alloy, and now it'll be adding a Carbon Dynamo Disc to the lineup. At £1,059, it'll be the same price as the 700C version and will probably be available from January 2019. 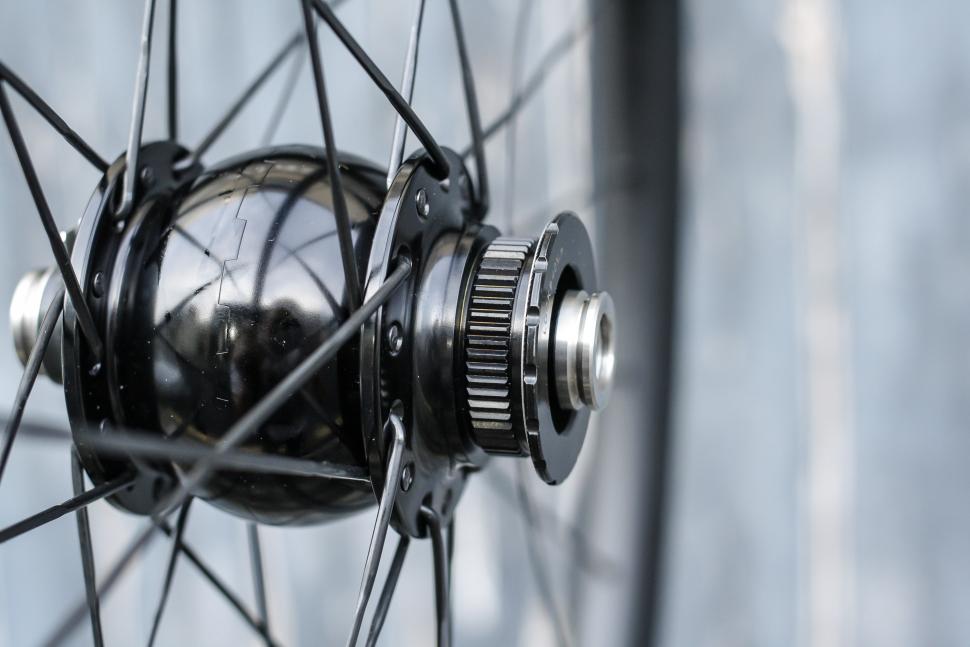 We already have a set in, so stay tuned to road.cc for a review. Find out more about the Hunt 30 Carbon Dynamo Disc here. 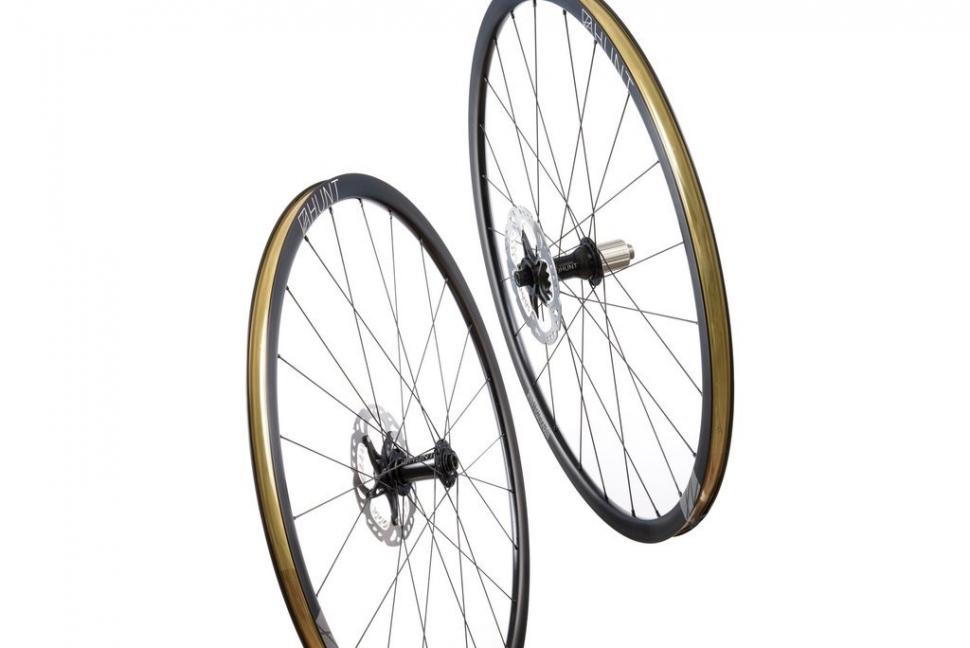 An updated version of Hunt's 4 Season Disc wheelset is available now with a wider rim than previously; you now get a 19mm internal width and a 24mm external width (compared to 17mm and 23mm before), the idea being to provide increased stability for wider tyres.

Despite the increased size, the weight has come down slightly to a claimed 1,517g per wheelset thanks to the use of a new High Fatigue Resistance (HFR+) alloy for the rims.

Black Night-Safe reflective decals are designed to make you much more visible when riding in darkness or low-light conditions.

As before, this wheelset is co-branded with Mason — it's called the Mason X Hunt 4 Season Disc Wheelset. It retails at £319.

Hunt is also offering an off-road/gravel version of its existing 30 Carbon Gravel Disc although, as the name suggests, it has a 35mm deep rim. That rim has a 23mm internal width and a 30mm external width

The freehub body features a ceramic surface treatment to stop sprockets digging into the splines in use. The technology comes from a Cambridge-based company called Keronite and Hunt calls it H Ceramic.

Hunt has always used an anti-bite stainless insert on its hubs (see picture of the Adventure Carbon Dynamo Disc 650 hub, above) to prevent damage but after many months of trials it says that the H Ceramic treatment does away with the need, although it is a more expensive alternative.

Hunt intends to roll the H Ceramic tech to other models over time.

Hunt claims a wheelset weight of 1,553g here, although no price has yet been set.

Get more info on Hunt at www.huntbikewheels.com