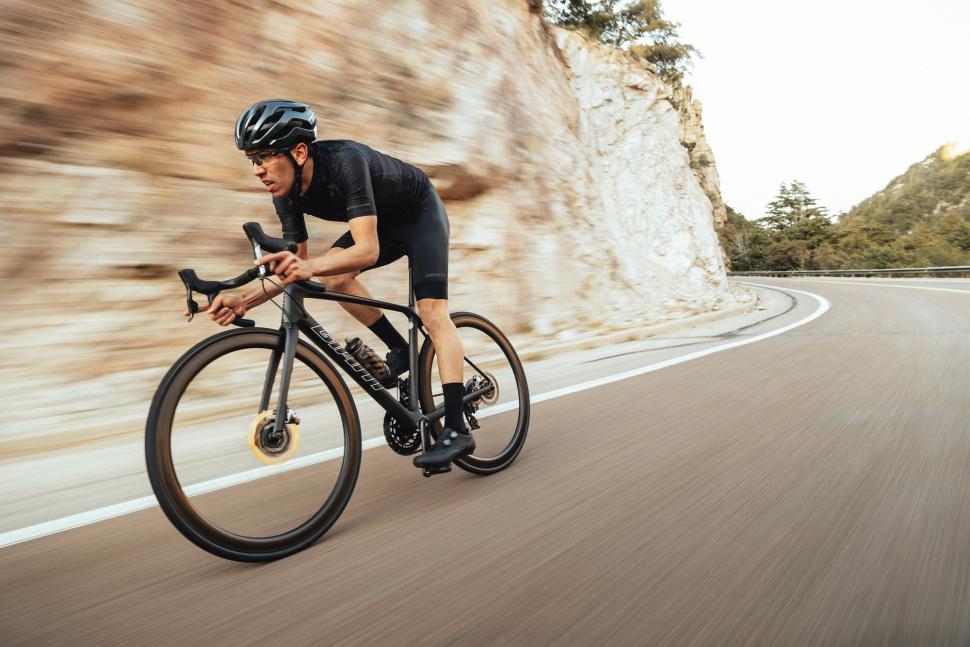 The new 2021 Giant TCR Advanced SL 0 Disc is a lightweight and extremely stiff race bike that has been given the aero treatment. We've had the chance to ride it several times over the past week, and we're very impressed.

The bike I've been riding is the top-of-the range option, the spec given at the bottom of the page.

Get all the details on the whole range in our story: Giant unveils "fastest TCR ever"

We weighed the complete bike (minus bottle cages and pedals), in an ML size, at 6.69kg. That's very light for a disc-equipped bike. We don't yet have a UK price for this bike yet – the range isn't available over here until next month – but we do know that it'll be $11,000 in the US. Like I said, top-of-the-range!

The usual First Ride scenario is that we've been on a launch and ridden the bike a couple of times on some challenging terrain.

It's different this time around because of the coronavirus pandemic. Giant had to cancel the media launch and shipped the bike directly to road.cc.

I've ridden Giant TCR Advanced SL 0 Disc half a dozen times over the past week as my designated exercise for the day, but never more than 1:30hrs at a time because of the UK's lockdown restrictions and the fact that I don't want to take the piss. I've ridden some decent climbs and some sinuous descents but I haven't taken the bike over a Pyrenean col.

We often say that you should treat our First Rides as initial impressions rather than full reviews, but that's even more valid than usual this time around.

You'll notice that we're lacking our own riding shots too, for obvious reasons.

The first thing you notice about the Giant TCR Advanced SL 0 Disc is, not surprisingly, its light weight. Sling your power through the cranks and it accelerates fast, and climbing is a real strength. You'd expect that. 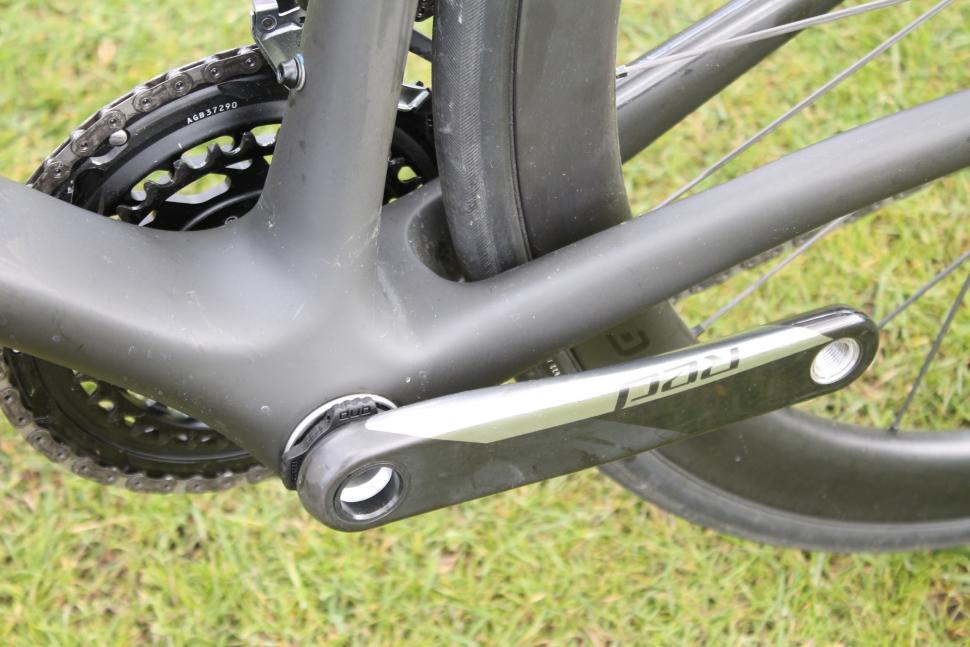 The real boon, though, is the level of stiffness on offer at the same time. Get out of the saddle to launch yourself up a climb and there's virtually no discernible flex anywhere. It's almost freaky! The bottom bracket, held in place by a huge down tube, is a solid platform from which to fire your best efforts. 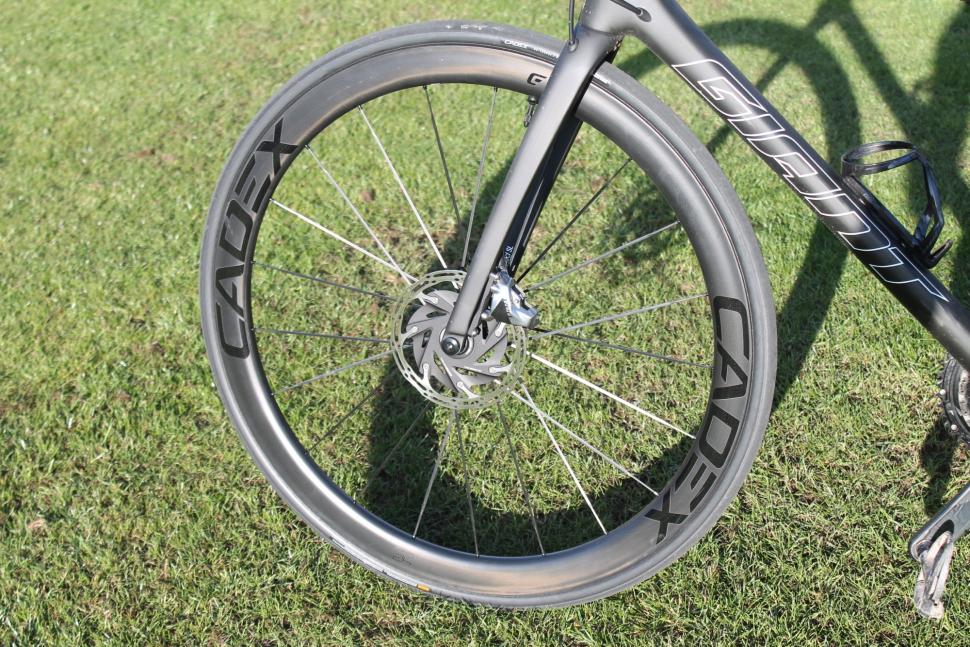 Descending is a delight. The slim-legged fork looks like it'll bend in the breeze but appearances can be deceptive. You can chuck the TCR Advanced SL hard into one corner and straight over the opposite way into the next without feeling anything other than complete confidence in its abilities.

Giant has stuck with its OverDrive 2 system here, meaning that the fork steerer is tapered to take a 1 1/4in bearing at the top and a 1 1/2in bearing down below. Despite a fork weight of just 330g, the steering precision on offer here is impressive.

Aerodynamic performance is hard to judge outside of the wind tunnel. Giant says that the new TCR represents a "major leap forward in aero performance", although that's for an all-round road race bike as opposed to an aero road bike. Tubes have been shaped to reduce drag but not to the same extent as those of Giant's Propel, of course. 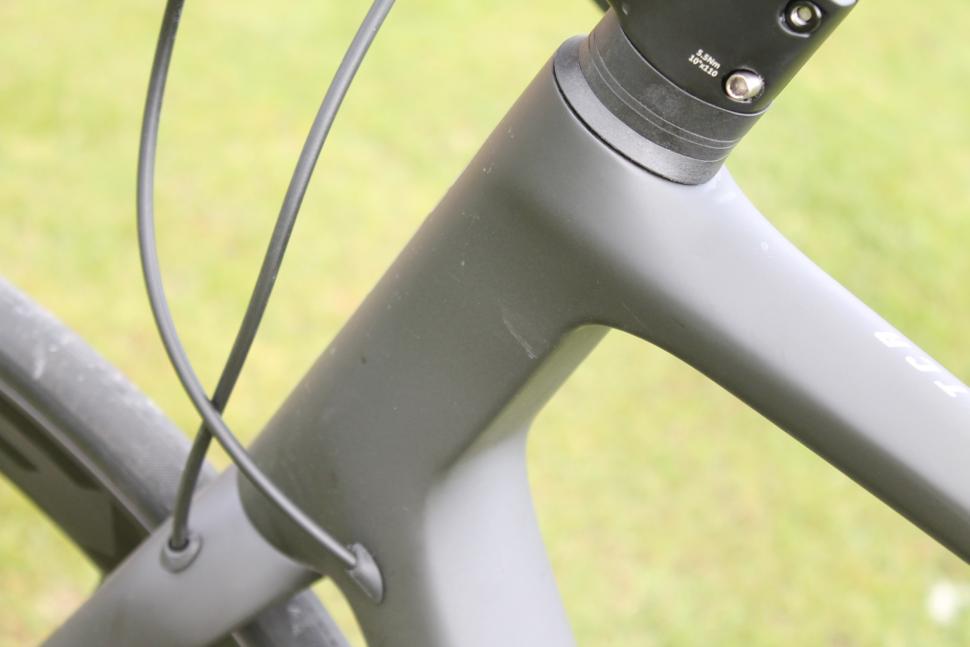 Giant is keen to point out that, according to its own figures from the wind tunnel, the TCR Advanced SL Disc is more slippery than the Specialized S-Works Tarmac Disc, the Trek Emonda SLR Disc and the Cervelo R5 Disc. That's a valid comparison, of course, because those bikes are all of a type, but we're reporting the claim rather than endorsing it.

Comfort isn't something that Giant has emphasised with the launch of the new TCRs and I've not had to give it much thought on my (admittedly short) rides so far. That's a good sign! The TCR Advanced SL 0 Disc isn't the softest feeling bike ever, but it's a long way from harsh. 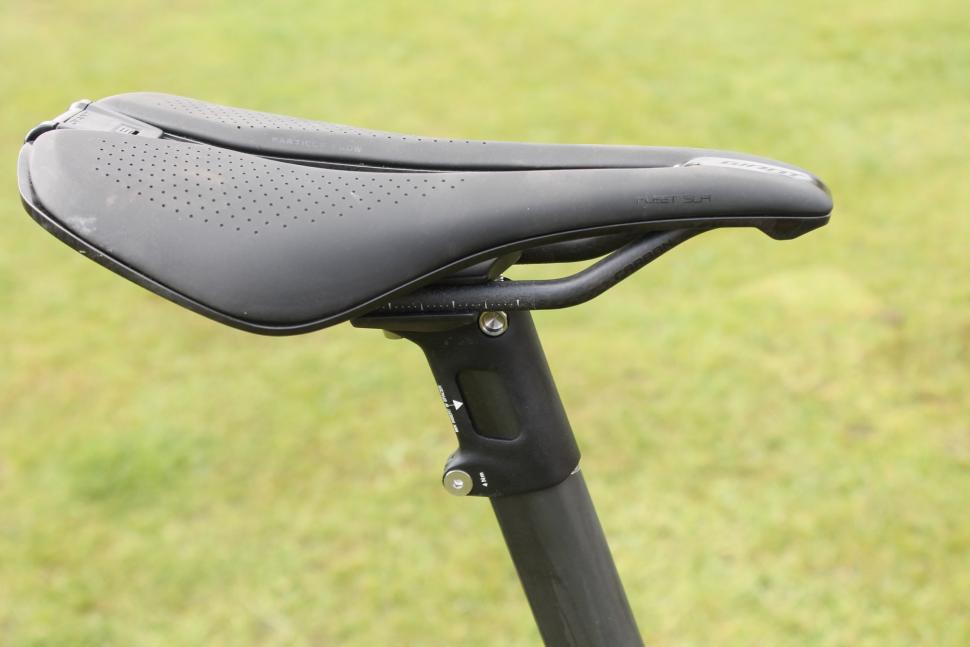 I've been using the new Giant Fleet SLR shorty saddle (it's 248mm long) with carbon rails and a cutaway centre, and it feels great. The padding isn't especially deep but it's effective, and there's some give in the shell that's noticeable if you accidentally hit anything hard and jagged. The fact that it weighs just 180g is a bonus. 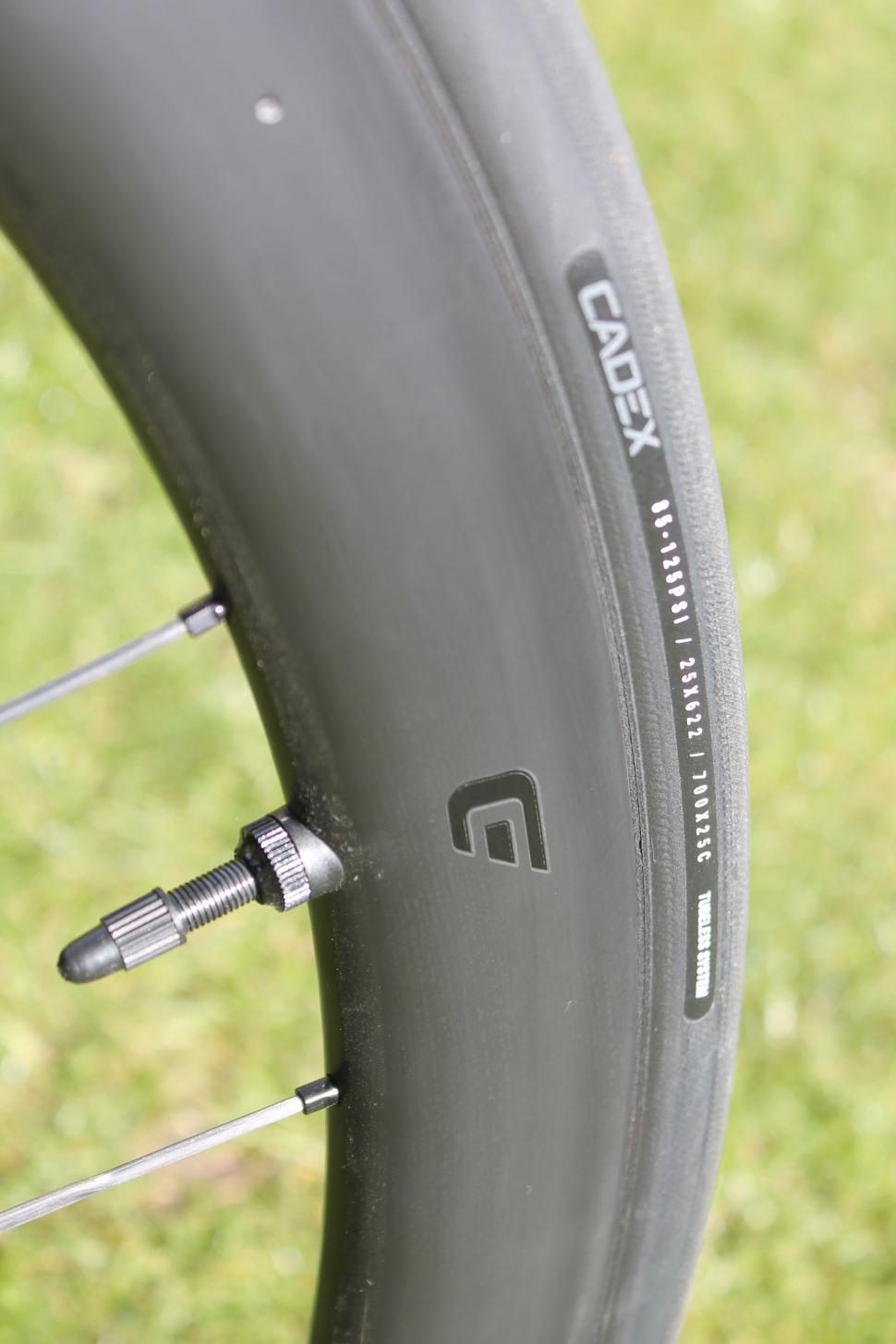 The Cadex Road Race tyres fitted to the 42mm-deep Cadex wheels are 25mm wide, which is what you'd expect on a bike of this kind. They're tubeless so you can run them at a lower pressure than normal without the risk of a pinch flat, and they're supple.

If you want more cushioning, you could always fit larger tyres. The disc brake TCRs will now take tyres up to 32mm wide. That might be a bit much, but 28s are a realistic alternative. With rim brake TCRs, 28mm is the maximum, the size of the calliper being the limiting factor here. Giant has paid big attention to little details with this launch. I like the fact that the disc brake models come with a removable composite lever for taking the wheels off, which is something we've seen previously from other brands, such as Orro. The lever is held in the axle by a rubber O-ring plus a magnet. 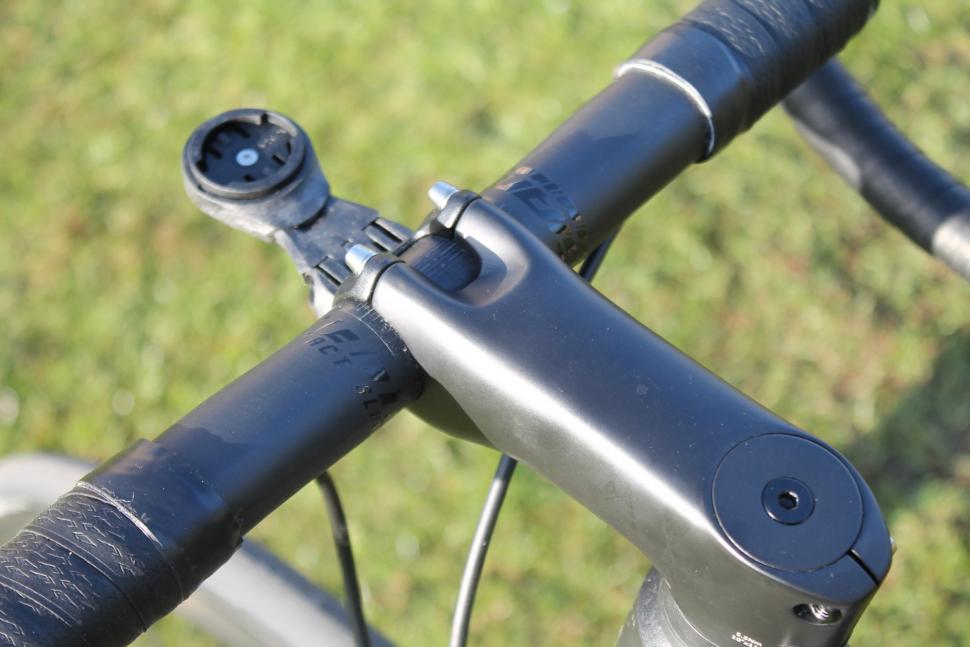 The TCR Advanced SL and Pro models also come with a new out-front mount that fixes to the stem bolts and takes computers from Garmin, Wahoo and Giant. A GoPro mount is included too. Fair enough, you might say, spend this kind of money and you can expect a few little extras thrown in.

Although full details of UK specs and pricing have yet to be announced – they're coming next month – we do know that both rim brake and disc brake versions of the TCR Advanced and TCR Advanced Pro will be available as complete bikes.

Second, the complete bikes are SRAM only: the Advanced SL 1 Disc is equipped with a SRAM Force eTap AXS groupset and the Advanced SL 0 Disc – the one I've been riding – has a full complement of SRAM Red eTap AXS components. There's no Shimano Dura-Ace Di2 option, which is a surprise given the prestige and popularity of that groupset, and its visibility within the pro peloton (okay, that's not happening right now, but you get the point). Why? Giant seems to be of the opinion that SRAM Red eTap AXS is the best option out there right now. It says that it'll release a Dura-Ace Di2 version when the next iteration of the groupset appears, which will be next year. In the meantime, you'll have to buy the TCR Advanced SL Disc frameset and organise a Dura-Ace build yourself.