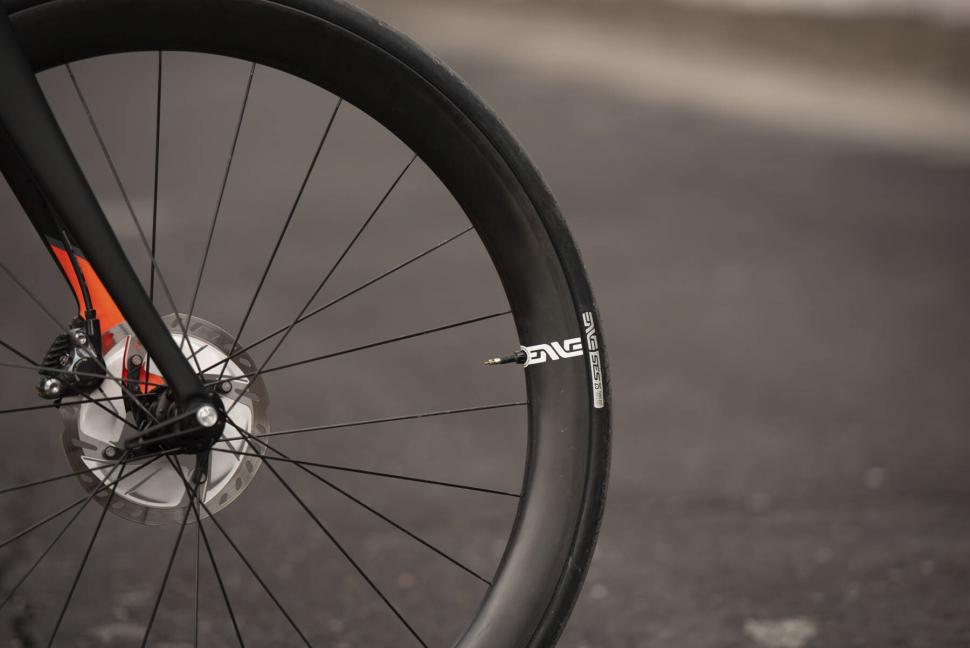 Enve has launched its first road tyre with the new SES range designed to match up with its SES range of wheels. The tyres are also claimed to be aero optimised with Enve saying that the SES tyres “achieve gains in real-world speed and efficiency.”

Ever the fans of graphs and acronyms, Enve has provided quite a few of both with the new tyres.

The big claim is that the SES tyres can make any aero wheelset faster. Enve says that the Smart ENVE System aero foundation was used in the development of the tyres, resulting in a “meaningful improvement in drag reduction” on any Enve SES or non-Enve aero wheelset.

It’s here that we get our first graph with Enve pitting the 25mm size SES tyre against the 25mm sizes of the Vittoria Corsa Speed and Schwalbe’s Pro One. At both the 20mph and 30mph speeds when mounted to both Enve 5.6 and 7.8 wheelsets, Enve claims that its SES tyres provided the lowest weighted average drag. 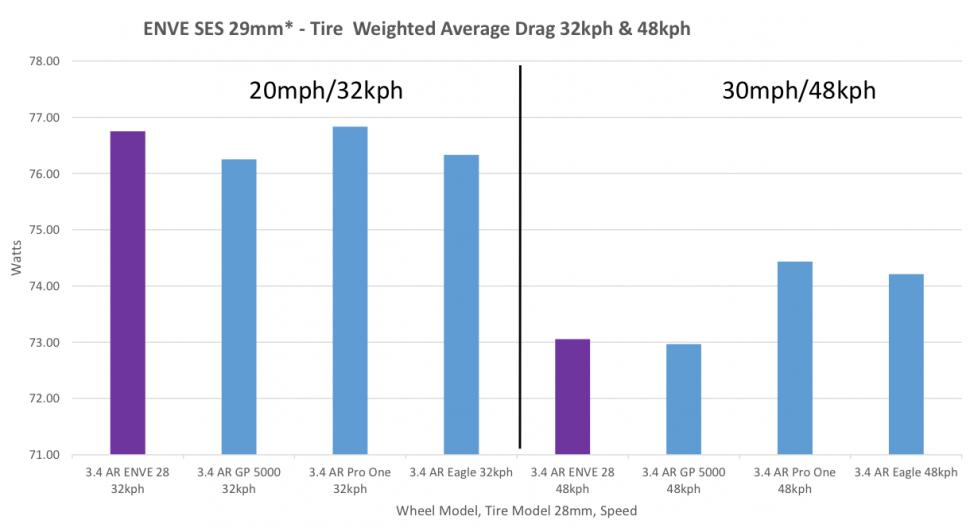 Step the size up to a 28mm tyre and the Enve SES doesn’t appear to be the fastest at 20mph when mounted to Enve’s 3.4 wheelset. The Continental GP5000 tyre looks like it just edges it, though the four tested tyres are within a watt of each other. Push the pace up to 30mph though and the SES tyre claws back some ground on the GP5000.

Enve says that there are two main factors that they considered when designing the SES tyres to be aero optimised. The first is the tyre shape. An “elliptical shape”, where a tyre that is narrower than the rim, is, Evne claims, rather good at being aero, but loses out on rolling efficiency, handling and traction. A round shape, like you get when mounting a wide tyre on a narrow rim apparently solves the handling issues of the elliptical shape while also being aero at high wind angles, but aero performance is compromised at low wind angles.

Enve's “real-world fast” solution is a hybrid shape which they say “strikes [a] balance between handling, stability, rolling efficiency and aerodynamics.” To achieve this, you'll need to get the tyre size that is correct for your rims. Enve says that the 25mm is the aero choice for its SES and Foundation wheels. The 27mm size is "designed to maximise the aero performance of the SES AR wheel line and to provide a higher-volume tire option for traditional SES and Foundation." The 29mm and 31mm sizes are aimed at the SES AR wheelsets with the 31mm size also usable on Enve's G23 gravel wheelset. Enve claims that the tyre’s tread pattern is also important, as it “acts as a trip edge that energises the airflow so that it remains attached as it flows from the tire to rim surface on the front wheel. On the rear wheel, the tread helps to close the wake as the airflow transitions off the tire.”

“The actual tread pattern is not so important, rather that certain design attributes be present (i.e. angles and edges). Consequently, these attributes exist in the ENVE logo.”

Enve says that it has been at the forefront of hookless rim design since 2014 and this lead to a tubeless-optimised rim interface with the new SES tyres. 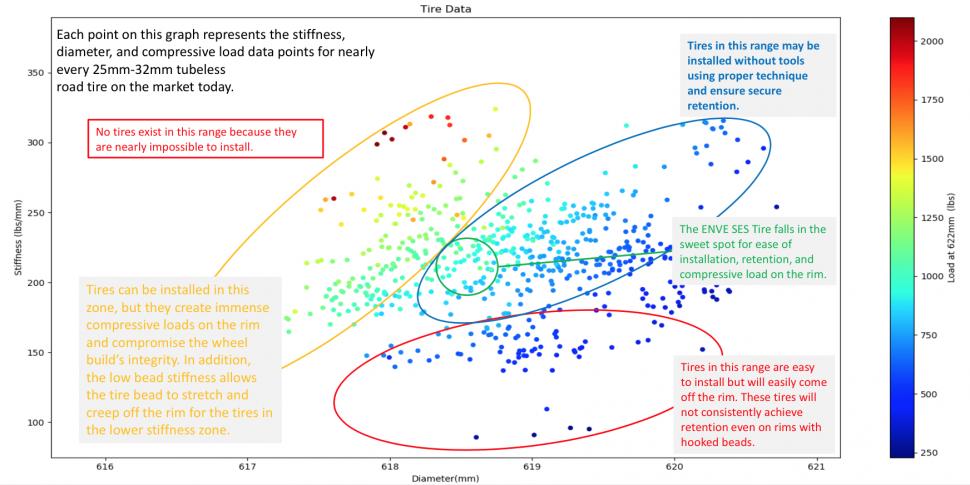 In essence, Enve says that the optimal tubeless experience means easy installation without levers, an airtight seal and a secure fit. Handily, Enve has a graph to show where its tyres sit on the tubeless optimisation scale.

The other things that tyres need to do

Easy setup and aero gains are all well and good, but eventually, you’re going to come across a corner. Enve says that its work with Tufo has resulted in the SPC Silica compound being used for “excellent wet weather performance and low rolling resistance.”

You might also end up rolling over something rather sharp. A Vectran puncture protection layer is included to offer some protection against flats. 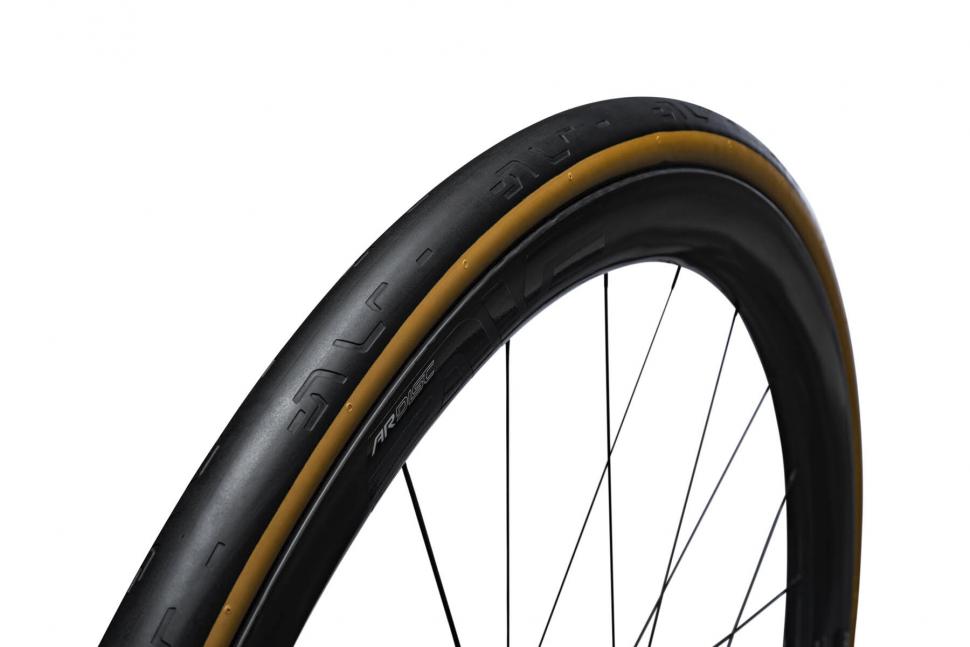 The SES tyres come in 25mm, 27mm, 29mm and 31mm sizes and cost £70 per tyre. You have a choice between black or tan sidewalls and handily, Enve has provided measurements of each tyre when mounted on different sized rims.