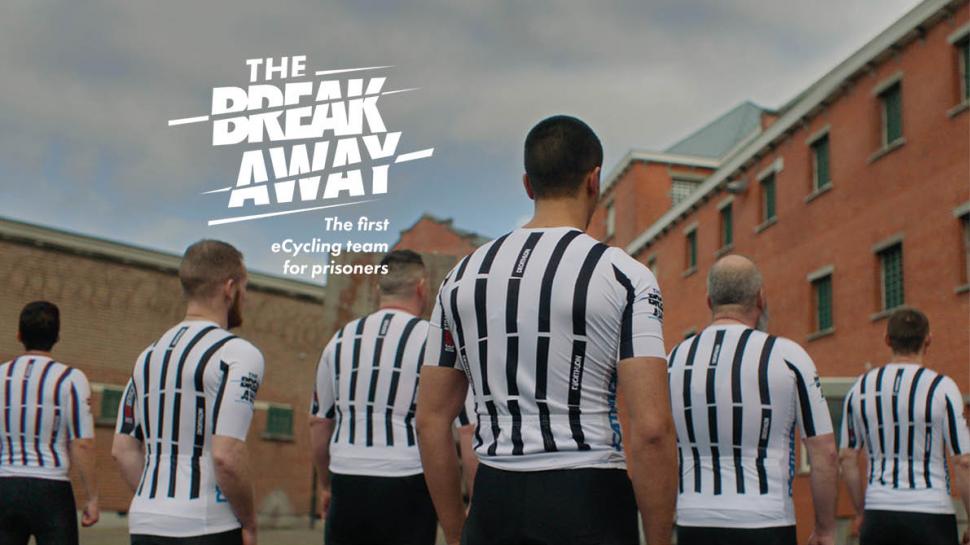 Decathlon launches The Breakaway, 'the first eCycling Team for prisoners'

Decathlon has announced the launch of its eCycling team, The Breakaway, for prisoners of Oudenaarde’s maximum security prison in Belgium. Sport in prison is said to benefit inmates’ mental health and behaviour as well as improving their chances of rehabilitation, says Decathlon.

> 15 of the best turbo trainers The initiative forms part of Decathlon’s greater vision of making sport accessible to all, and will see the prisoners training and racing with riders from outside the prison on the virtual cycling platform Zwift.

The team of six will be participating in rides and races as per the strict schedule that the prison regime allows. Each team member is being supplied with a bike, connected smart trainer and all other necessary equipment to ride the virtual roads. Thanks to the smart trainer the prisoners will be able to simulate hills and, through Zwift, ride together with other cyclists from outside the prison. The teammates will be training towards a final race against a team of judges, members of the Department of Justice, prison guards and other law enforcement staff.

> A Zwift setup for every budget

The Breakaway was created in collaboration with De Rode Antraciet vzw, a non-profit organisation promoting sports & culture within prisons, Cellmade vzw, and the Belgian Department of Justice.

The six anonymous inmates have testified in the video below how sport makes them feel free and how it can provide an escape from detention, if just for a brief moment.

Thomas Lejeune Debarre, Marketing & Communication leader of Decathlon says: “With this project, we want to show that sport brings people together, despite differences or prejudices. A shared passion, in this case cycling, puts all this aside. We believe that sport is the key to teaching people how to live together, help and respect each other.”

Heather Loontjens, the sports deputy of Oudenaarde prison said: ‘“Our mission is to create maximum interaction between inmates and society, with sport as a key element. The Breakaway is a new step towards achieving this. All our partners aim to give prisoners an opportunity to engage and connect with cyclists from outside the prison. This kind of experience gives them a better chance of success when they are eventually released, making it a win-win for the individuals involved and for society."

While Decathlon can claim to have pulled together the first prison eSports team competing virtually, The Breakaway isn't the first cycling team made up of jailbirds. To help boost rehabilitation projects in France's struggling jails, around 200 inmates were given the chance to take part in their own penal Tour de France in 2009, a 2,200 mile bike ride starting in Lille and finishing in Paris. The majority of the detainees rode one stage before passing the baton to a team from another prison, The Guardian reported.

Also, during the 100th edition of the Tour de France in 2013, prisoners from a Corsican jail were allowed out for the day to cycle a stage.

1
Grant Shapps: Cyclists should have number plates, be insured and subject to speed limits
2
Confusion as Grant Shapps now says he is "not attracted to bureaucracy" of number plates for cyclists
3
"Grant Shapps should be congratulated": Frothing talk shows and Mr Loophole discuss number plates for cyclists
4
Is a 13-speed Campagnolo road groupset on the way?
5
Cycle route in Swansea or Alpe d'Huez? Hairpin-packed active travel path opens
6
Cyclist sustains serious injuries after council fails to remove fallen tree from bike path
7
Roy Keane says cycling is his only way of keeping fit – but he’s “not exactly Sean Kelly”
8
“I have honour, integrity”: Phone driver launches bizarre rant at CyclingMikey – before mounting footpath