New tubeless-ready, disc only race wheels are claimed to be lighter and come with a £2,800 price tag
by Liam Cahill

Campagnolo has revealed new Bora Ultra WTO wheels that are tubeless-ready, disc-only, and save weight through a new C-Lux carbon finish. They also come with a N3W freehub, feature hidden nipples that are adjusted externally... Oh, and they cost the best part of three grand.

Started in 1994, Campagnolo’s Bora wheelset range has been updated for 2021 with an Ultra version of the WTO (Wind Tunnel Optimised) road race wheels. The range consists of 33, 45 and 60mm rim depths and thanks to several design tweaks, each wheel is said to be around 100g lighter than the standard Bora WTO wheels.

While the 45 and 60mm depths keep their 19mm internal and 26.1mm external widths, the 33mm option has been made wider internally to boost stiffness, and Campagnolo says that the wheels represent “a massive step forward.” As a race wheel, aerodynamics were at the forefront of the Bora Ultra WTO’s design and Campagnolo says that this design “enables maximum aerodynamic penetration: with a wind angle of between 10° and 20° – a condition which occurs for 80% of the time spent in the saddle – this wheel is unrivalled when it comes to overcoming air resistance.

“The tapered design of the central area of the hub reduces the frontal area of the component, while the special design of the flanges helps to reduce turbulence in the airflow, and the elliptical section of the 24 spokes drastically reduces resistance when moving forwards.” While Campagnolo makes some bold claims, the only data that they have made available to us is one set of figures from drag testing that compared the Bora Ultra WTO 45 against a ‘non-aero wheel’ and Swiss Side’s Hadron 485. With the data, Campagnolo claims that there is a significant saving over the non-aero wheels and also a slight saving over the Swiss Side wheels at certain yaw angles. Campagnolo says that the wheels work best when paired with 25mm tyres. Campagnolo was also keen to point out the potential savings of a tubeless system when compared to a tube-type clincher and a tubular tyre. In one of their theoretical scenarios (see above graphic) they claim an advantage for the Bora Ultra WTO 45 DB Tubeless of more than 7mins over a Bora One 50 DB tubular system. Part of the weight-saving that Campagnolo is claiming with the new wheels is said to come at the rim, specifically from the way the rim is finished. Campagnolo has created a new C-Lux (Campagnolo-Luxury) finish that they say “is so pristinely smooth that it doesn’t require lacquer.”

C-Lux is, essentially, an additional quality control step where Campagnolo checks for the absence of aesthetic defects that would usually be simply covered by the lacquer. These checks also have an effect on the rim bed with Campagnolo saying that the bead hooks are also less abrasive to the tyre bead.

While we’re at the rim bed, it’s worth mentioning that Campagnolo sticks to the 2-Way Fit system that it has used for several years. These wheels are tubeless-ready and thanks to the lack of spoke holes in the rim bed, you don’t need tubeless tape. 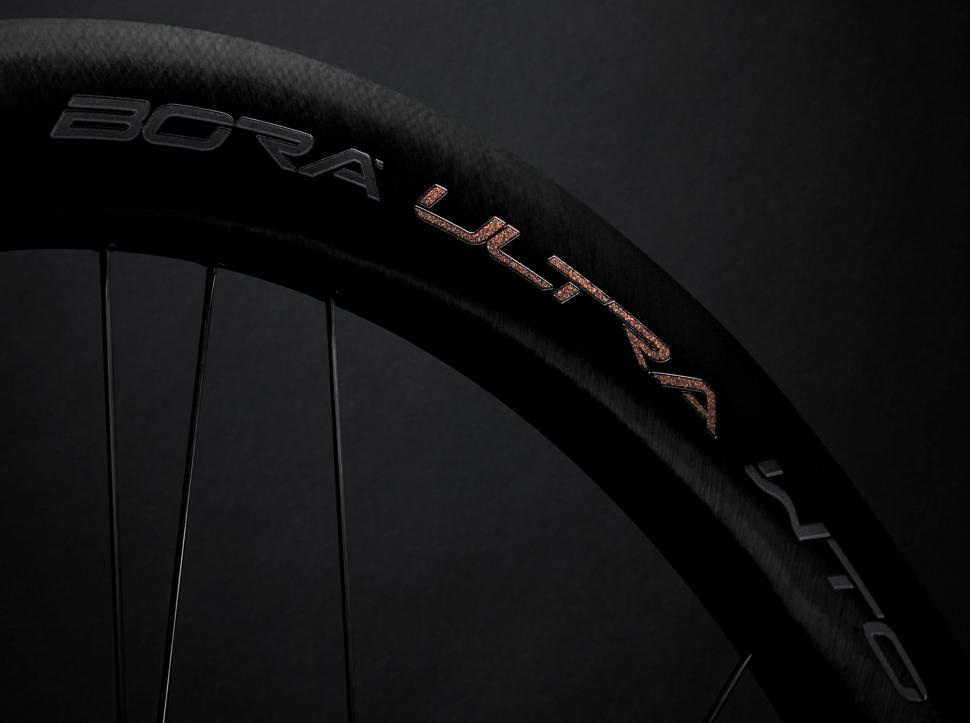 The carbon itself is H.U.L.C. (handmade ultra-light carbon) which “is the result of extensive development over decades of in-house carbon fibre moulding,” that enables Campagnolo’s engineers to “optimise the usage of both fibre and bonding resin for the perfect blend of strength, stiffness and light weight.” On the underside of the rims, you’ll find another interesting tech feature where the spokes enter the rims. Campagnolo has created an internally housed nipple that it calls Aero Mo-Mag which can be adjusted externally.

The nipples sit in a dedicated nipple seat with the guide chamber sat inside the rim. This, Campagnolo says, despite being a bit of a production nightmare, has several structural benefits. Firstly, unlike a standard nipple, the Aero Mo-Mag system means that the nipple lines up perfectly with the line of the spoke, reducing the bending stress on the spoke.

The system also ensures that the nipple does not dig into the carbon around the spoke holes which, incidentally, are created during the layup process rather than drilled. The lack of contact with the carbon is better for longevity, Campagnolo claims, and it also says that the nipple seat provides electric insulation to reduce corrosion at the nipple. Campagnolo claims that the performance benefit of the Aero Mo-Mag system is “cleaner and more efficient airflow when coupled with Campagnolo’s aero elliptical spokes.”

While internal nipples are a neat touch and generally come with a claim of aero savings, they can be a nightmare to work on. For tube-type clincher systems, it’s a simple case of popping off the tyre and tube to adjust, but for tubular and tubeless tyres, you’d need to uninstall the whole tyre system each time a slight wheel true was required. There’s also the fact of the holeless rim bed to consider as this removes access to an internal nipple. The benefit of the Aero Mo-Mag system, Campagnolo claims, is that truing work can be done without the need to remove the tyre.

Campagnolo’s Aero Mo-Mag internal nipple is accessed from the outside via a new tool. The two-part design allows the nipple to be adjusted while the aero spoke is held and prevented from twisting.

Those spokes use the G3 pattern that has become a familiar sight on Campagnolo’s top-end wheels. The new Ultra WTO wheels come with a new set of disc-specific hubs. The first major change is also the most noticeable with the front hub body now being made from carbon fibre. This includes an integrated radial flange and the new hubs are claimed to contribute to the overall weight savings.

With the bike industry chasing ever more marginal aero gains, Campagnolo also says that the hub flanges – where the spokes leave the hubs – have been made thinner to help them cut through the air more efficiently. That’s the claim, anyway.

Inside the aluminium body of the rear hub, Campagnolo has used a 36-tooth ratchet which it claims to provide “near-instant driver body engagement.” 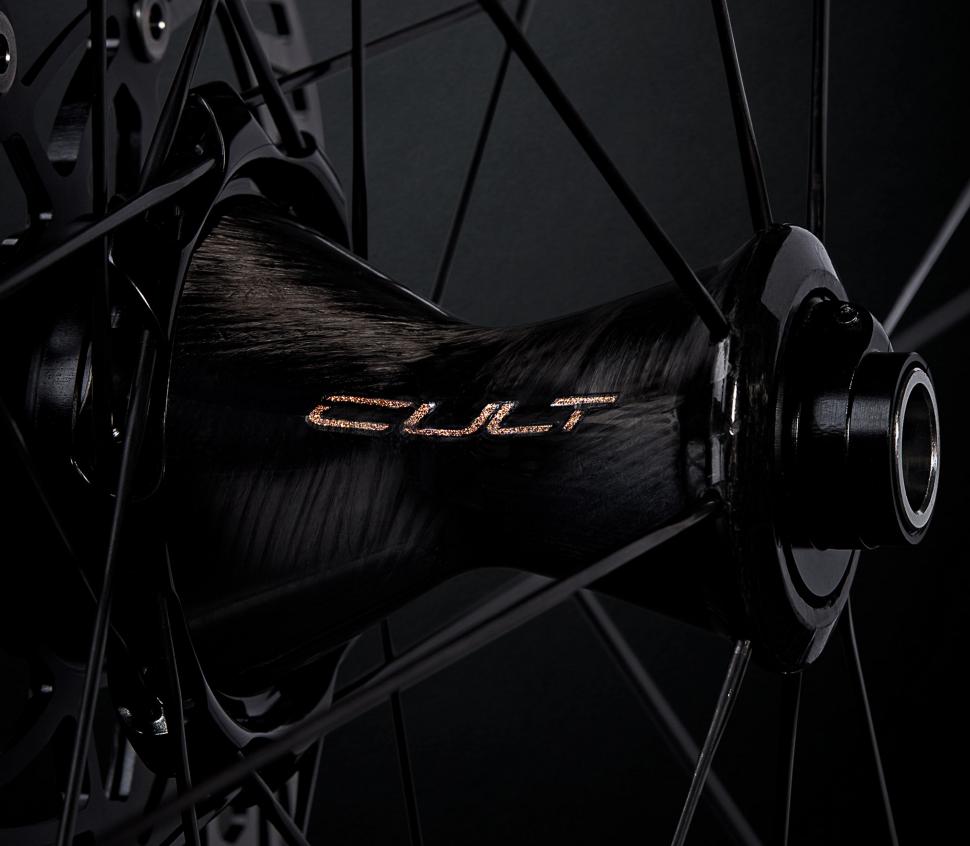 We have a set of the new Campagnolo Bora Ultra WTO 45 wheels on the way for testing, so lookout for a review on the site soon.