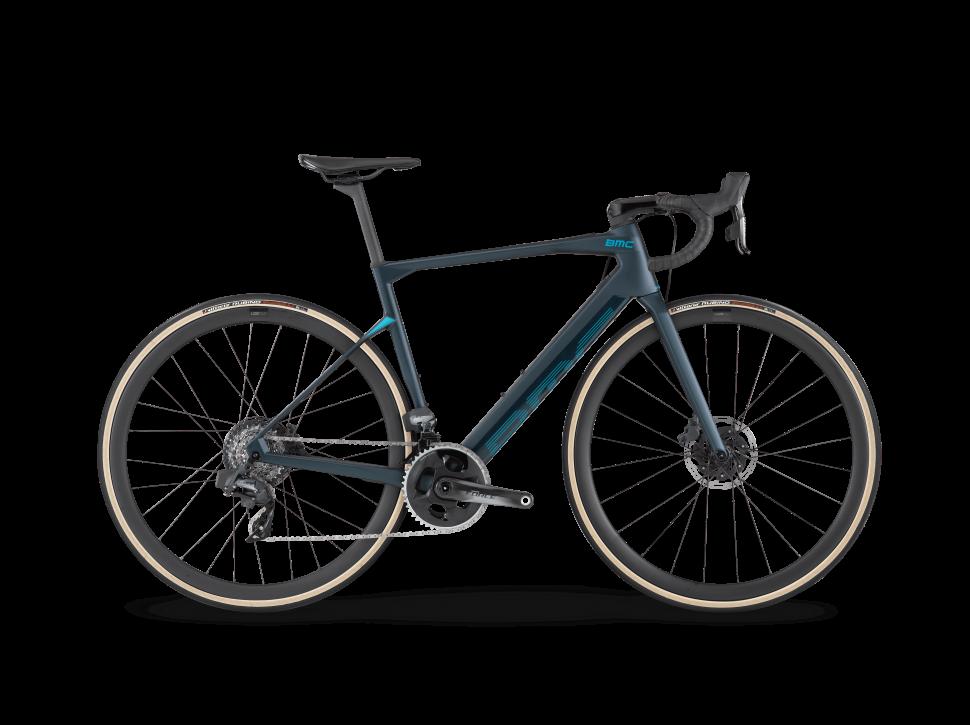 The new lightweight e-road bike has a 350Wh battery, a Mahle X20 hub drive and weights starting at 11.8kg
by Jamie Williams

The Roadmachine is BMC’s all-around performance bike designed for endurance riding, and now it’s available in e-bike form. Benefitting from Mahle’s new X20 hub, you’d be hard-pressed to tell this apart from its perennial namesake. 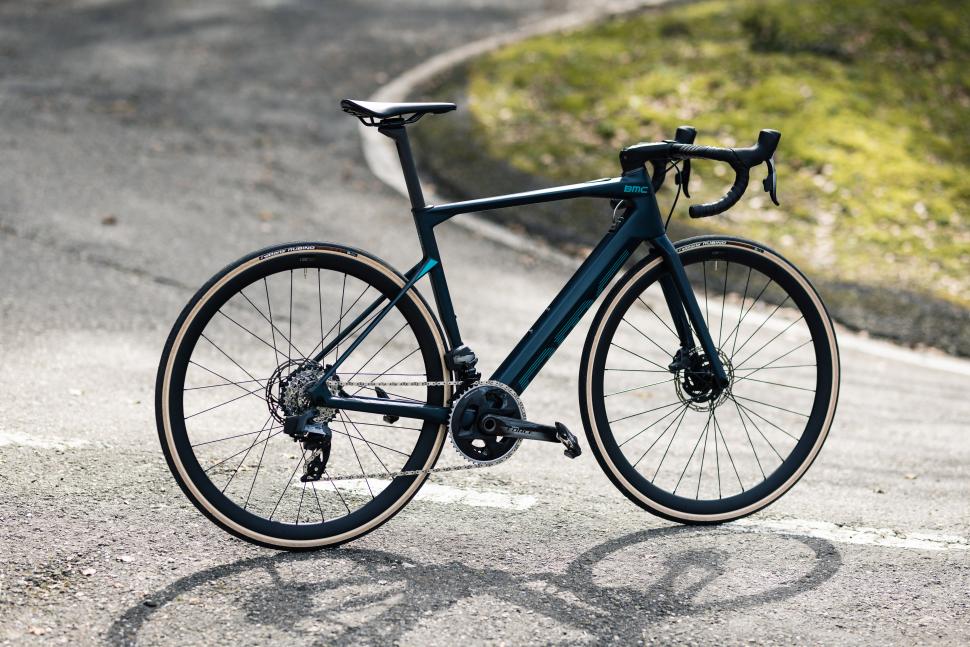 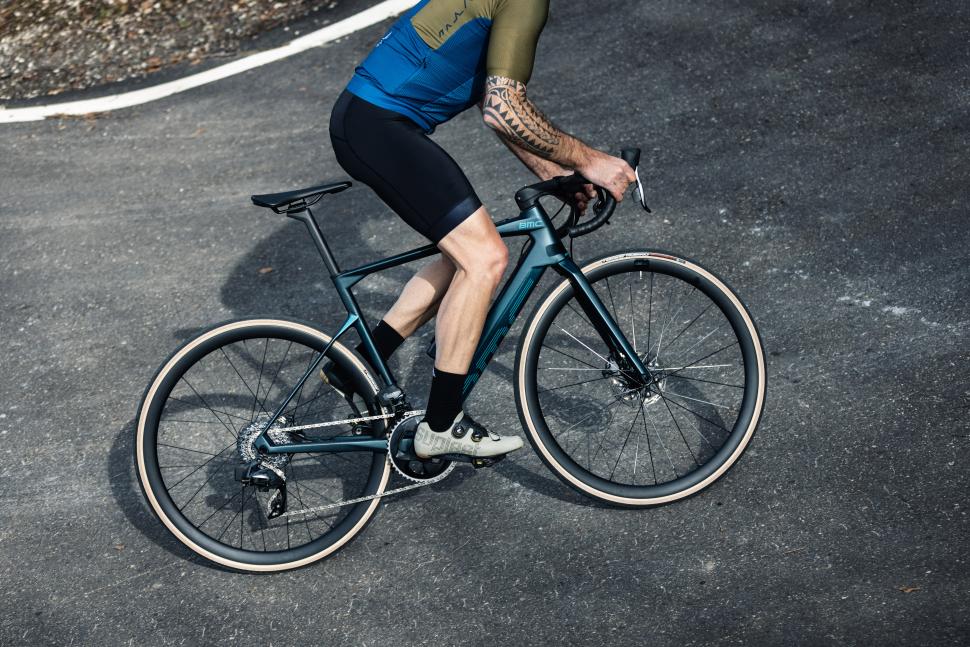 Perhaps the most impressive stat from the launch is that a 54cm Roadmachine AMP ONE has a claimed weight of just 11.8kg. The top-spec Specialized S-Works Turbo Creo Sl, to give one example, starts at 12.3kg despite costing more than £3,000 more.

BMC hasn’t scrimped on battery size either. All models come with a 350Wh battery as standard, but the bike is also compatible with a smaller 250Wh battery that would save a further 750g. 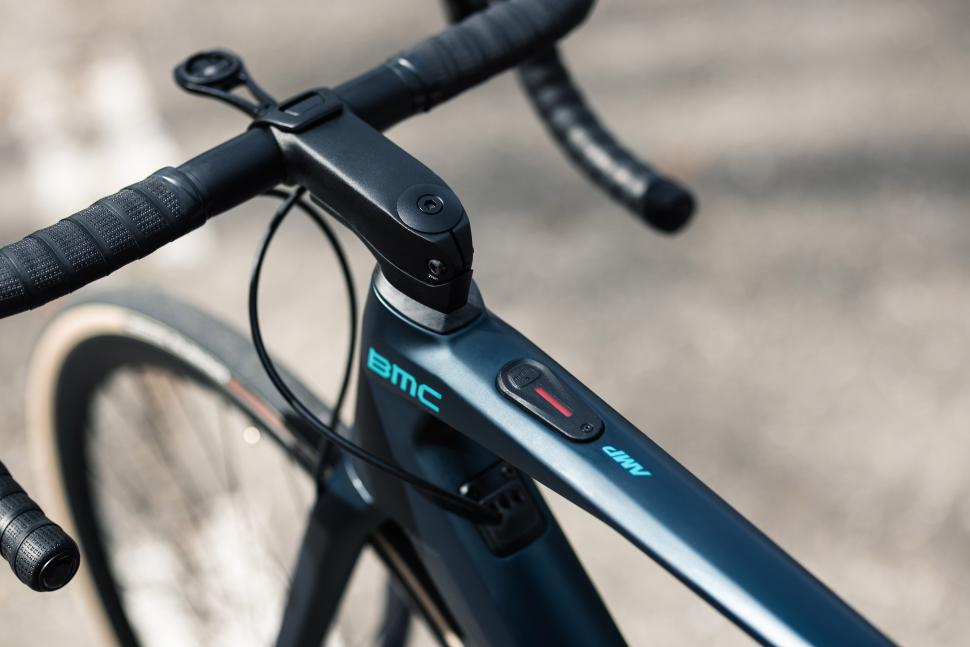 As we’ve seen from many recent e-bikes, the AMP is also compatible with a range extender battery, Mahle’s optional extra ‘Range Extender’ has 173Wh of capacity and weighs 1,100g, that can be connected to the bike with an extra cable and fits into the Mahle bottle cage.

BMC hasn't published any range figures for the new bikes and we can only assume that this is because it's so dependent on terrain, the mode you have the bike in, and how much work you're prepared to do. Mahle does give us some idea of what to expect with a claim of "up to 200km of autonomy" for their 350Wh battery when paired with the 173Wh range extender. 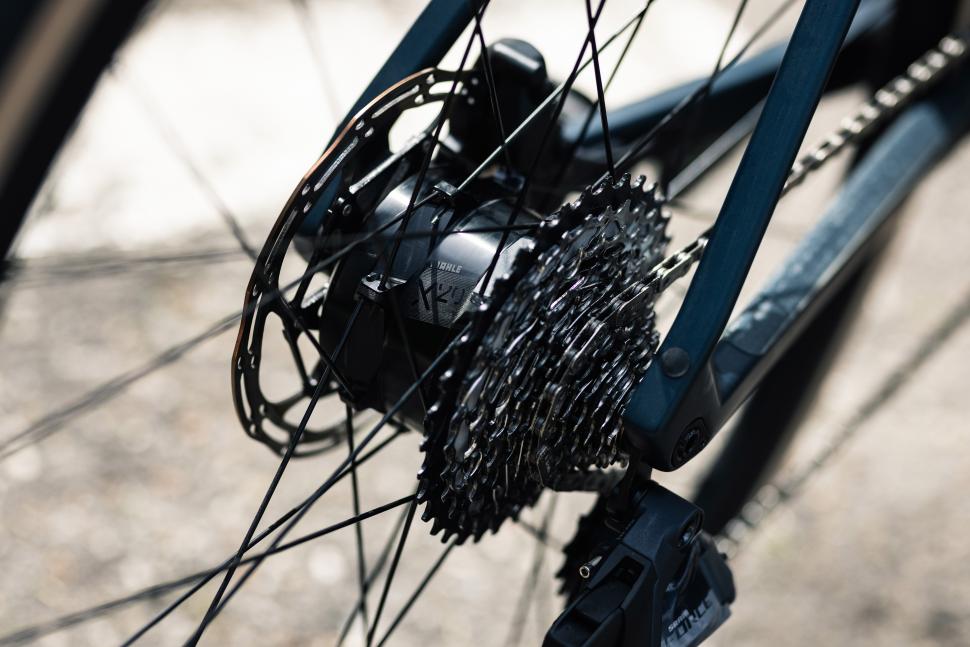 All of that battery power gets transferred into useful energy via Mahle’s new X20 hub drive, which is the same system as we’ve seen in other recent performance-orientated e-road bikes such as the Scott Addict eRide. The rear hub weighs in at an impressive 1.399kg - a full 500g lighter than the previous X35 version, and that brings the total weight of the Mahle system down to 3.2kg. 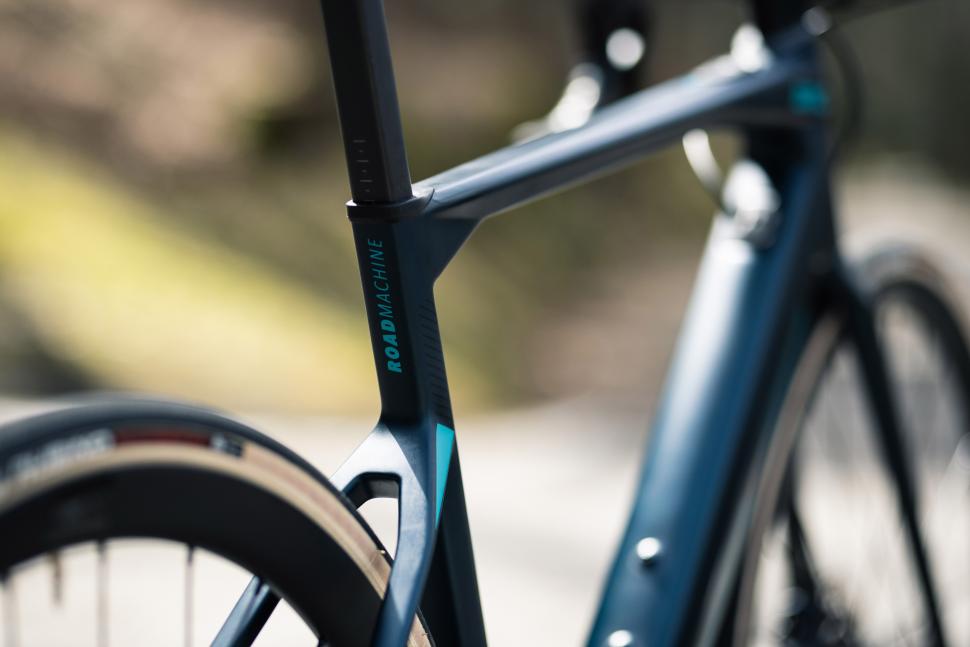 BMC acknowledges it is a bit late to the performance e-road bike market, but claims that the technology was not at a level that made the project feasible in its eyes until now. The Mahle X20 hub is a big part of this, which has a claimed maximum torque figure of 60Nm. Mahle bills the X20 as “a true smart system” that can make adjustments based on feedback from a range of sensors, including a new torque and cadence sensor in the bottom bracket. It’s possible to customise how the power is provided through the Mahle One app, and the system is marketed as “dragless” so you should be able to switch it off to save charge.

The geometry is exactly the same as the traditional Roadmachine series, and the tyre clearance is also identical: up to 33mm tyre width (measured and inflated). 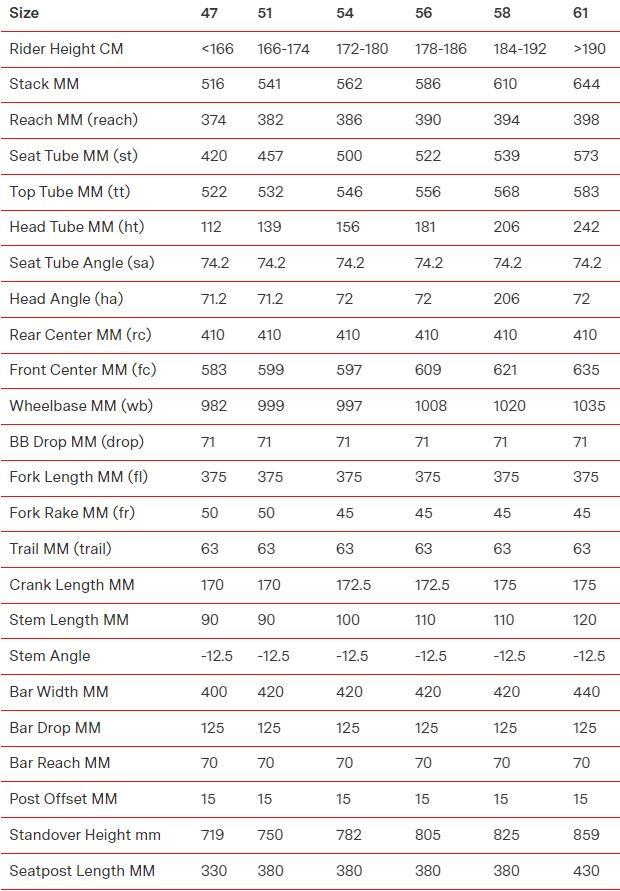 The Roadmachine AMP is available in the same sizes as the standard Roadmachine series, those being: 47, 51, 54, 56, 58, and 61. Not all manufacturers manage to fit the battery into frame sizes that small so there will be less competition for the 47cm size frame. 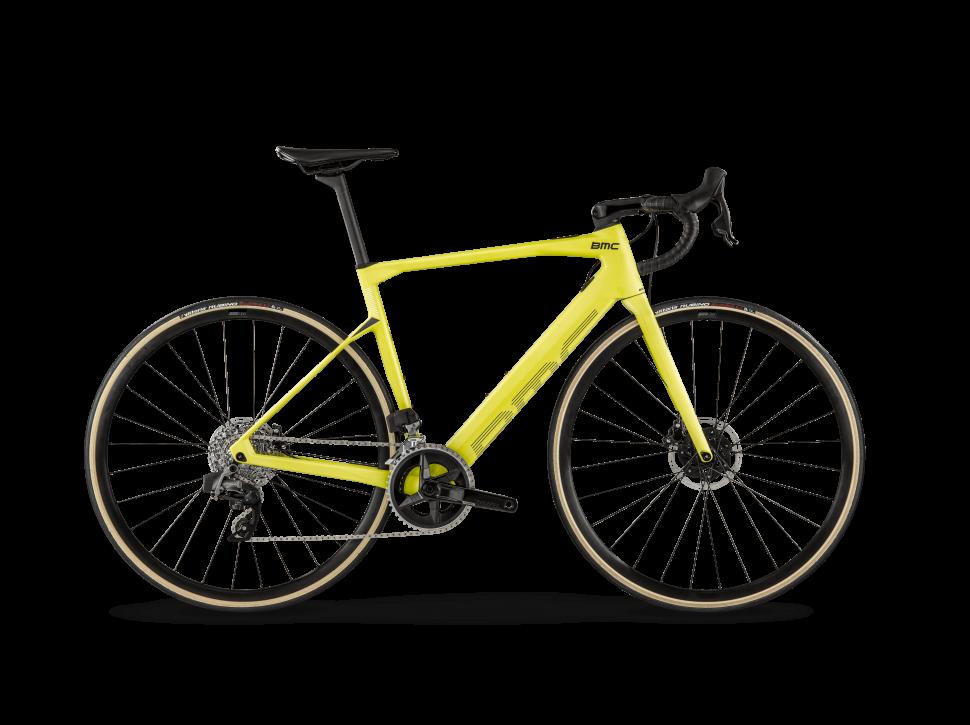 The Roadmachine AMP ONE and TWO (pictured above) will be available to buy from 1 July and the THREE (pictured below) will follow shortly after, available from August 2022. 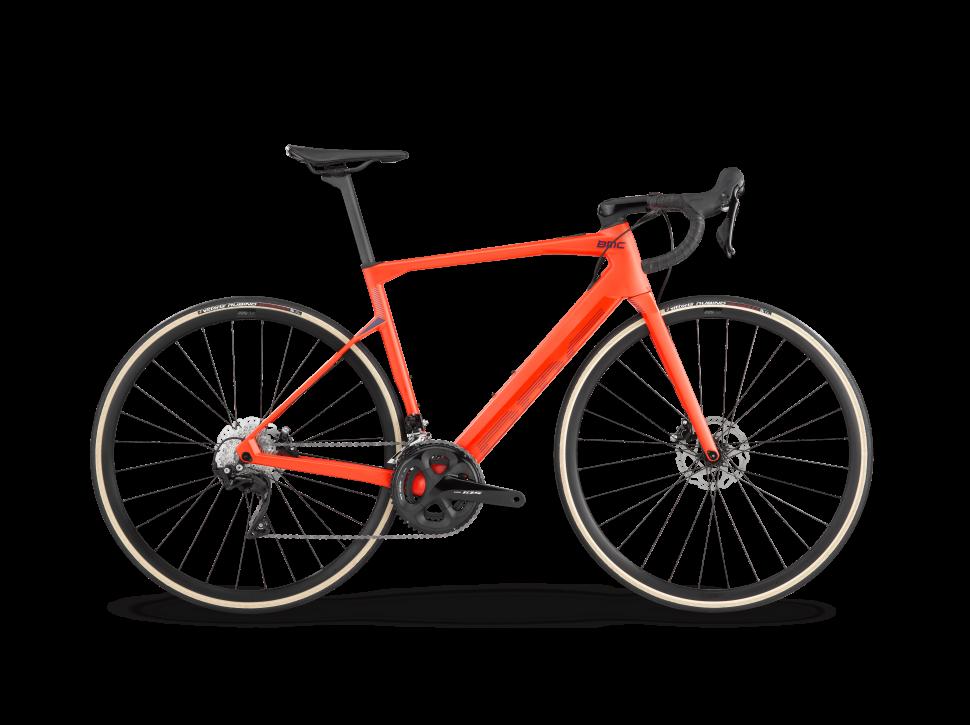 Other than the big button on the top tube, would you be able to tell that this was an e-bike? Let us know your thoughts in the comments section below…