The best of Bespoked 2021: highlights of all the hottest bikes from 10th anniversary show

Back for the 10th time in its new Harrogate venue after a 2020 hiatus, Bespoked showcases the best handbuilt bike in the land. Here are our highlights
by Richard Peace

This year’s incarnation of the UK’s handmade bike show Bespoked UK ventured north to the Harrogate Convention Centre. It was fascinating to see the sheer breadth that the label ‘handmade’ encompasses, from familiar framebuilding names with an unsurpassed reputation for quality, to the high-tech area of 3D printing and the more old-school but highly creative and imaginative approach of lone frame builders just starting out.

There was clearly a lot of buzz around 3D printing, with a fine display of the latest titanium frame lugs on the Reynolds stand. 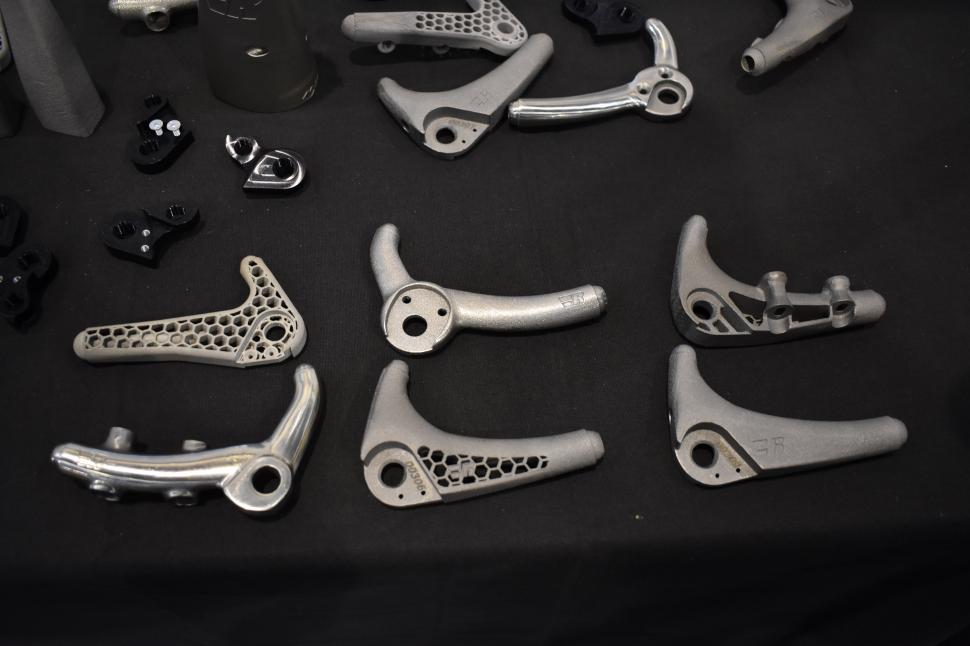 This is clearly an area they are looking to develop as the perfect complement to their tubeset offerings. Carbon is of course still king on the road racing circuit, so it wasn’t surprising to see new ventures in that area too. 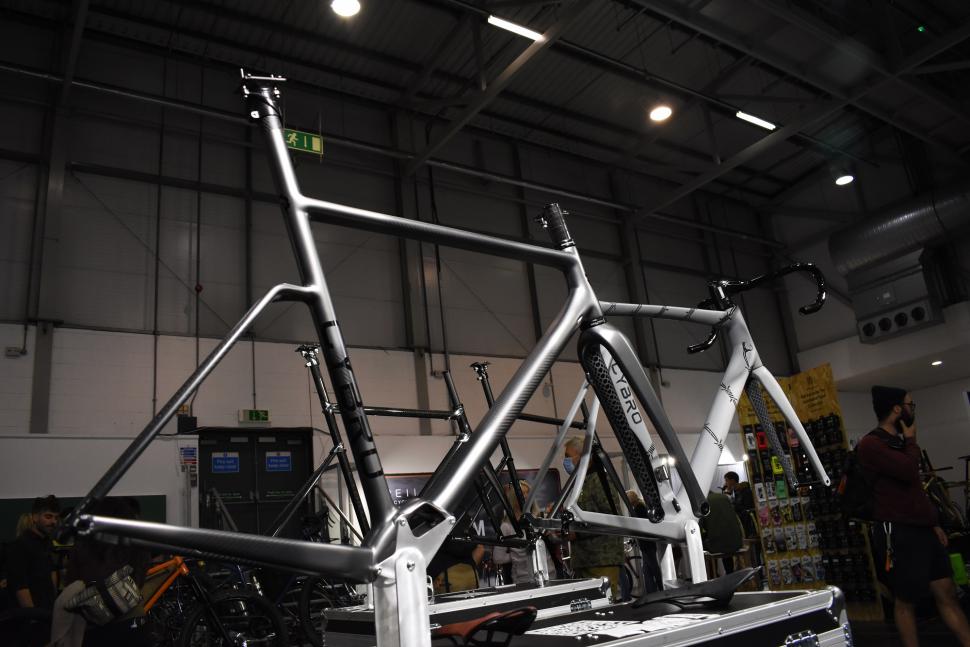 First off were the striking array of framesets on display from Cybro, made in Bassano in Italy. These were pretty hot off the press as Cybro debuted their latest full range at this year’s Eurobike. 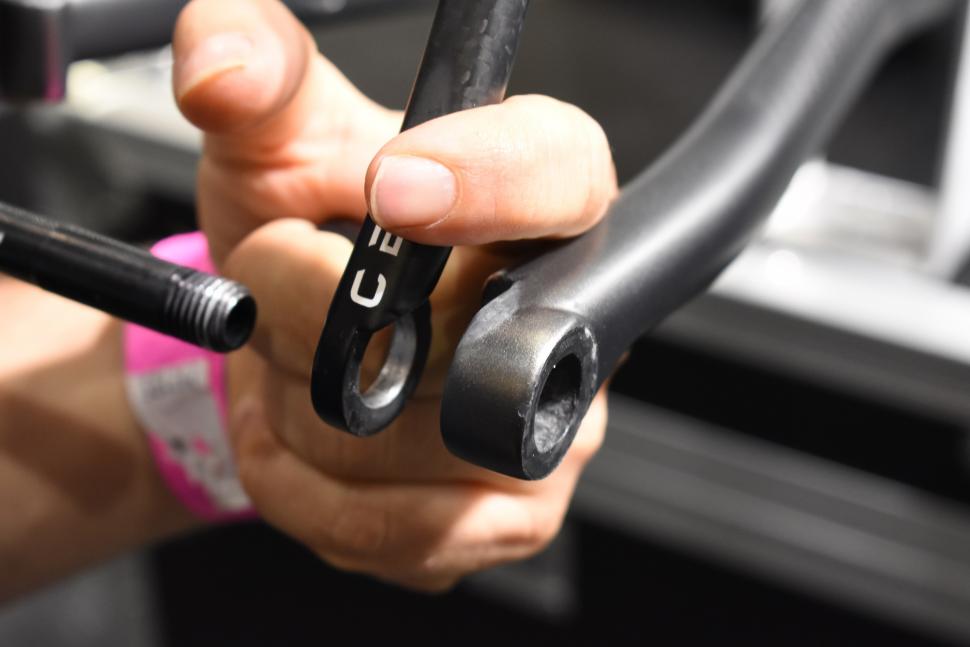 All the frames on display were fully made-to-measure including the beautifully finished N4 Corsa road bike. Their other offerings – track bike, city bike, gravel bike and mountain bike – all used their own design of rear dropout that allows a belt drive to be fitted without breaking the carbon frame. This feature won a Eurobike award this year. 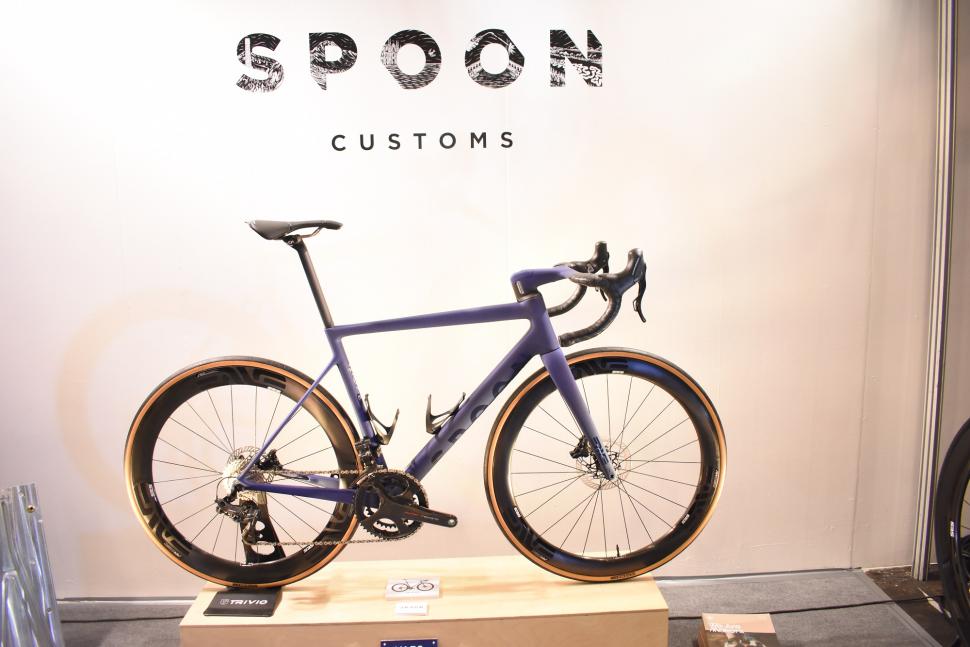 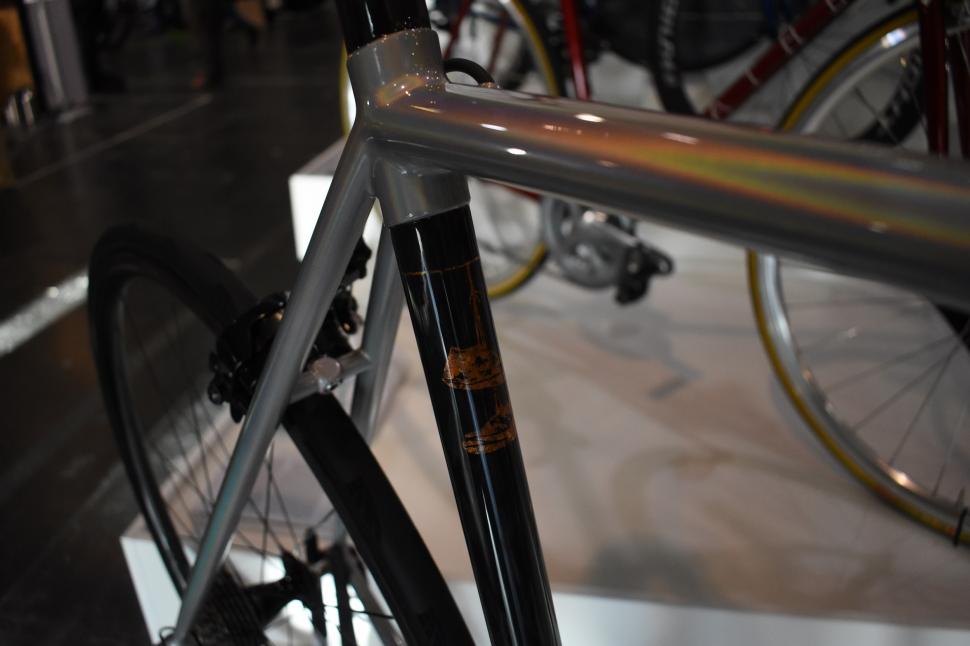 Well-known names were right at the entrance including Feather, Condor and Enigma. Feather, from just up the road in York, were one of busiest stands, and their well-known superb standard of work, that is race-proven and also beautiful, was on display in a wide-ranging collection. A combination of Columbus steel frames with ‘spectral’ paint finish (that changes colour depending on the light conditions) and carbon fibre seat tubes caught my eye. In line with the frame quality it featured Dura-Ace and Enve components and had a price tag of £12,850…. but for that you get a bike that claims a place in the top 1% of Strava times up the Alpe d’Huez. There was also a ‘travel’ bike custom build with S&S couplings to split the frame for packing down. Reilly were there not only to show off their wares but to honour the life of master framebuilder Mark Reilly, who sadly died earlier this year. Their limited-edition Legacy Frame, produced in honour of him, took pride of place on their stand. The handbuilt steel road frame uses Reynolds 753 tubing and stainless steel polished lugs – 753 being the first heat-treated tubeset in the race bike industry – and was on public display for the first time at Bespoked. 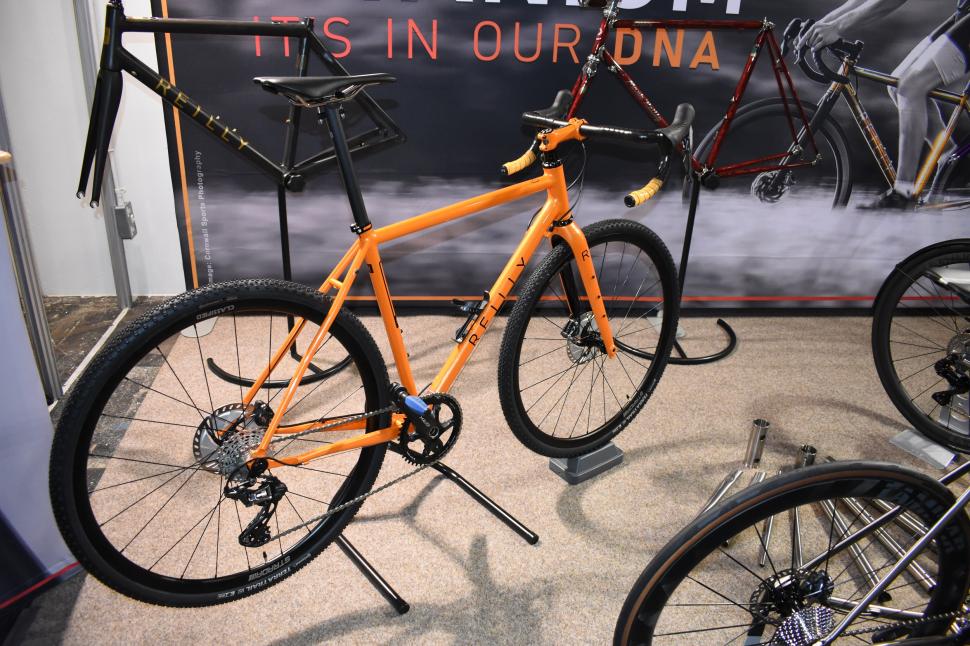 This replaces the need for a smaller chainring at the front; and while it's not always the case with hub gears, this one appeared to shift pretty well too. Other stalwarts there included Condor, showing off the latest ‘standard’ colour offering on their high end favourite the Acciaio, featuring some lovely virtually seamless frame joints and cut in paintwork on a Reynolds stainless steel frame (custom colours are available too). 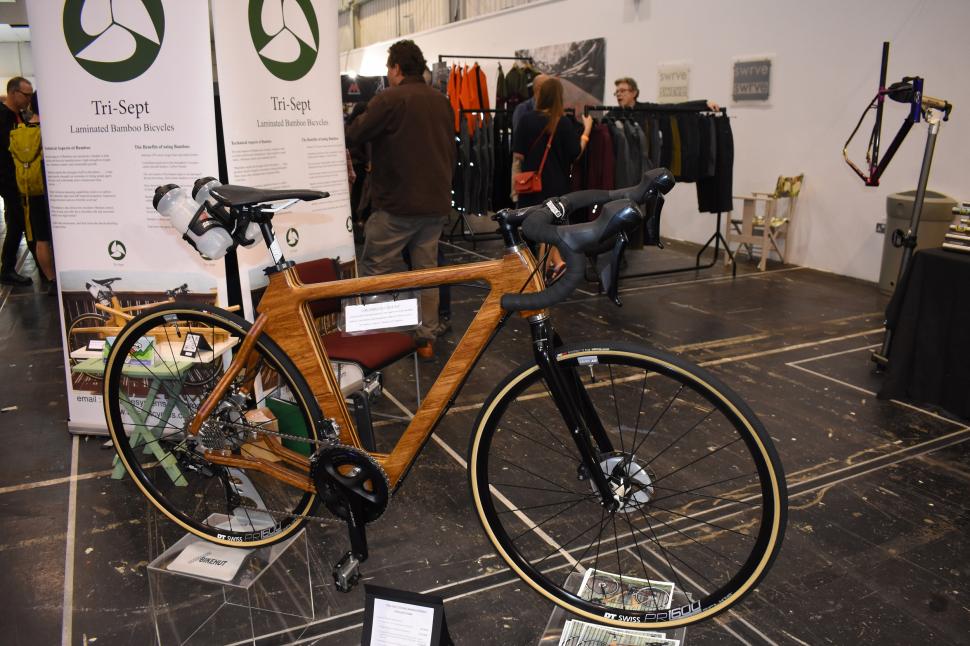 There are wood builds... and then there's Michael Cubbage of Tri-Sept's take on the genre, with this hollow-cored bamboo laminate frame being one of the most innovative bikes on display. It's made up of only four main frame components, and has apparently been ridden very successfully on sportives, over Belgian cobbles and even on long distance African adventures. 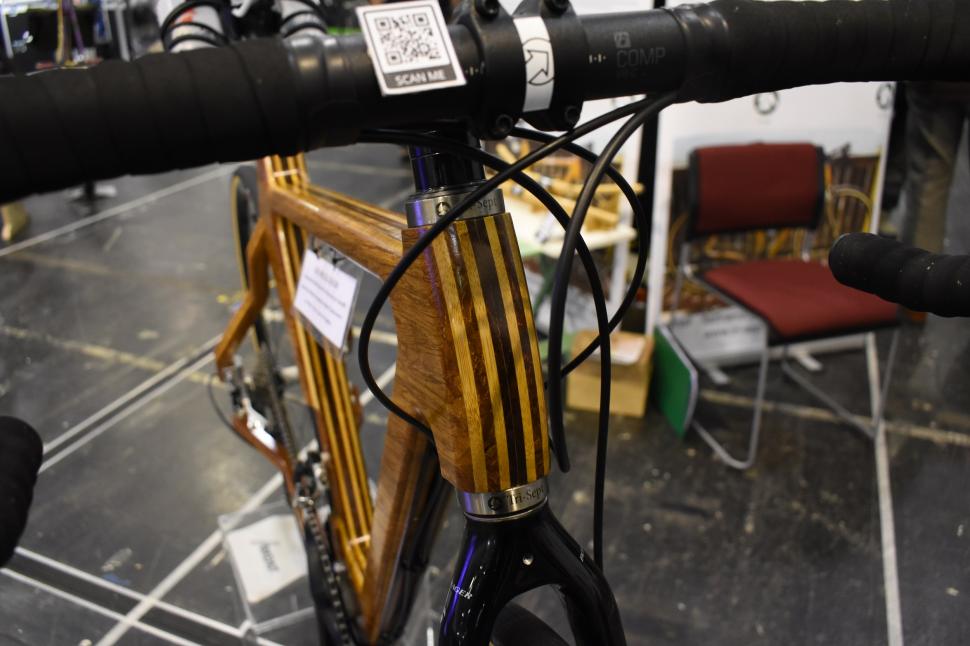 Bamboo is a wonderful frame material from ‘green’ and ride comfort perspectives and is very strong but, once assembled, it can make for rather a heavy machine; but at 12.45kg, the Tri-Sept exhibited at Bespoked is actually a little lighter than I would have guessed. 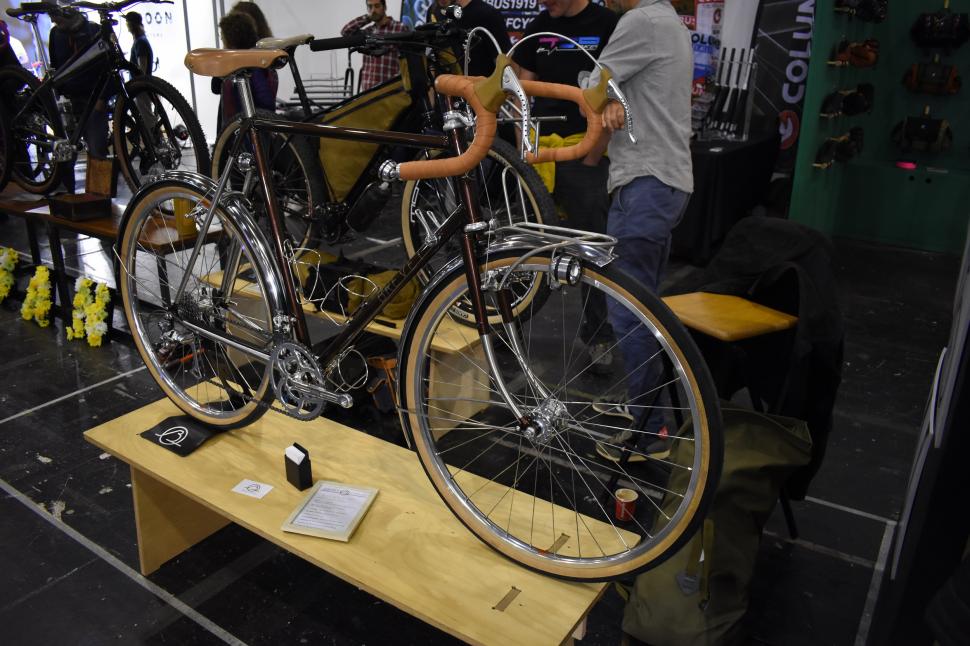 There was the usual trip into the past as seen through the eyes of some of the very best framebuilders out there, now using lighter, modern frame materials of course. Brevet Cycles L’Ephemere model conjures up how 1930s long distance touring on the continent might have looked... 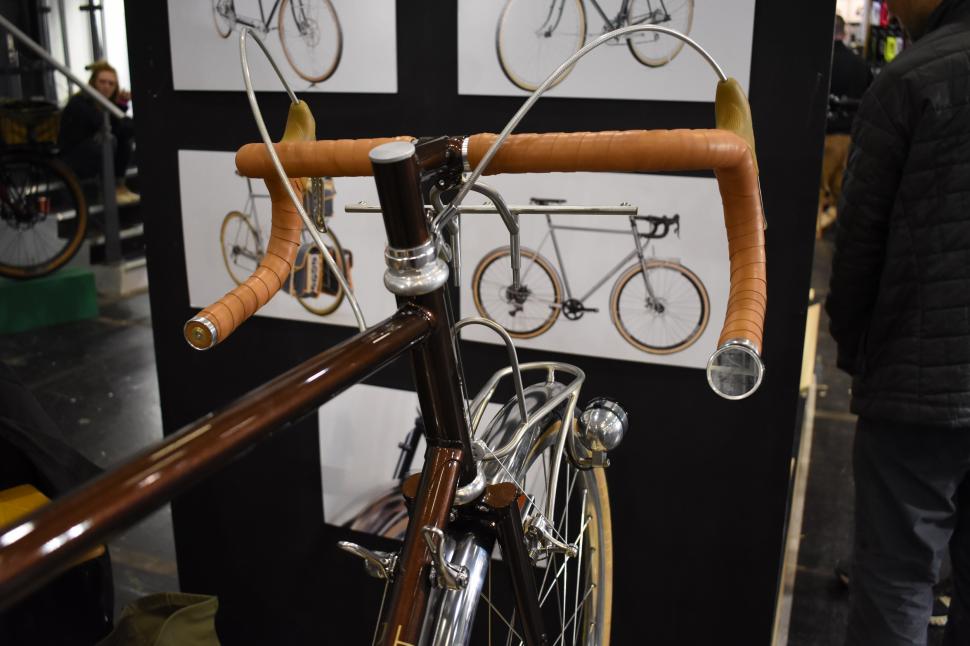 ...right down to the authentic cantilever brakes, with some lovely touches including a neat bar end mirror and a rear light built into the frame with hidden wiring. Super stylish and practical. Also very much in the Gallic retro-inspired spirit were Maison Tamboite, bringing the world of personalised bike haute couture to the show. 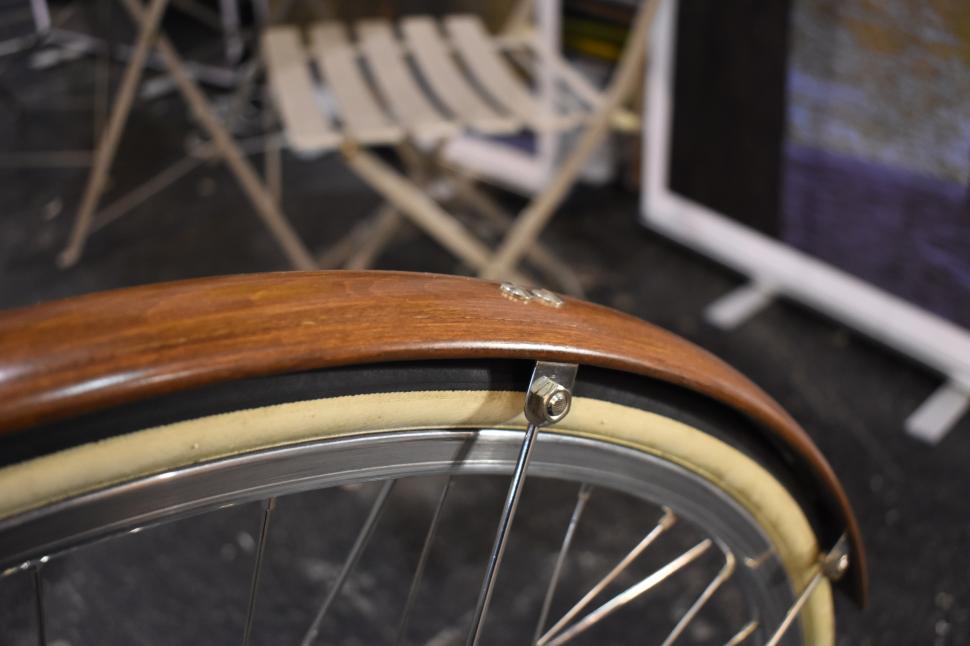 There was plenty of choice of low maintenance drive chains on show from them, with options for wooden wheels and fenders and a variety of stylish rack options too. Plenty of individuals were ploughing their own furrow too. Fledgling frame-builder Matt Pinfield used his nickname Pinner as his company name, and told us the 'Mini-Velo' is simply a bike built because it's exactly the kind of thing he wanted to ride. Made for a smaller person with Sturmey-Archer hub drum brakes and gears, the downtube is raised giving it space to fit an electric mid-drive. Matt says he has tried it on a previous iteration of the bike and it works well. 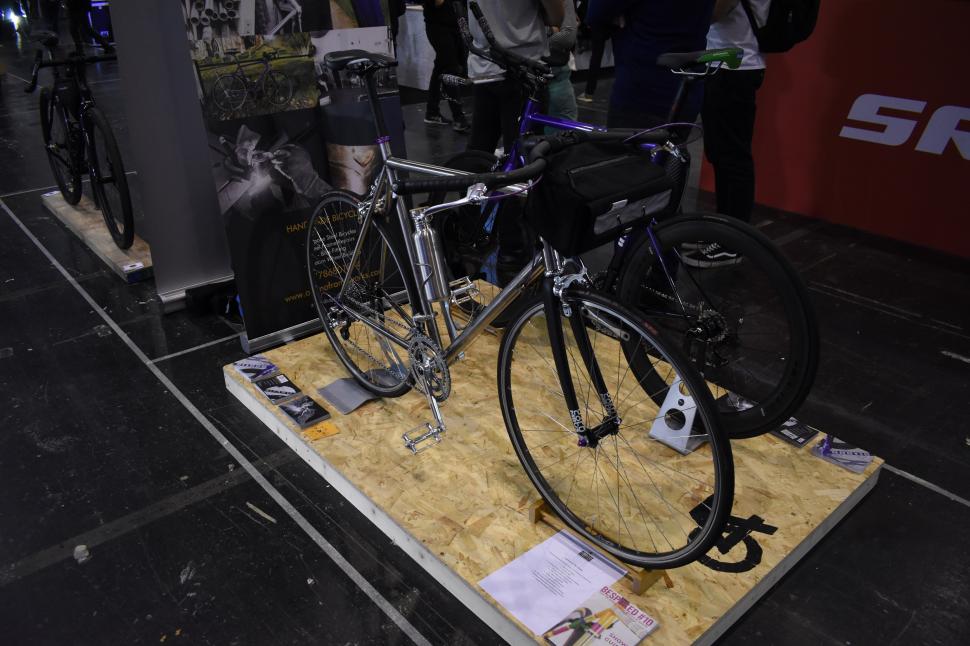 The owner of Leicester’s Alfano came into framebuilding when another maker sold his tools to him. Pete’s own bikes were on display and he’s clearly a serious time trialer, but it was the lovely stainless steel Lightweight Day Tripper model that takes inspiration from the early 20th century that caught our eye. This model, made in extra tough stainless Reynolds 953 tubing, involved serious skill and labour to work with and silver braze. Pete told us that he went through a set of cutting tools just to make this one bike. The impressive 9kg weight is testament to how thin the tough steel tubing is made.

Have you been to Bespoked this weekend? If so what were your highlights and have we missed anything? Let us know in the comments, and tell us about your faves from the selection above too of course!