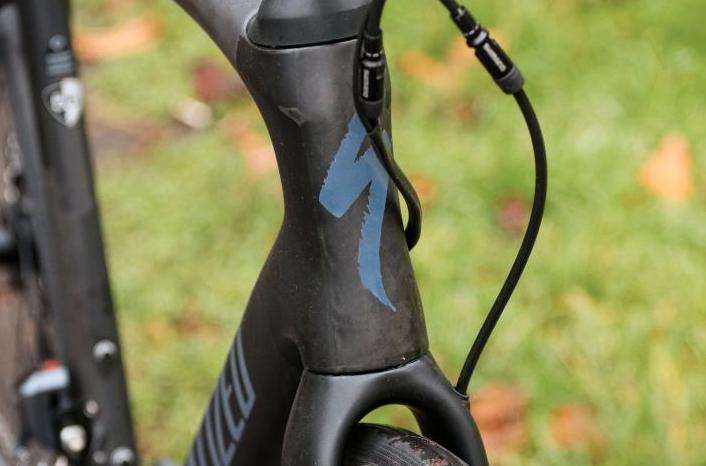 Are a truck tyre company stopping Specialized from launching a new bike? Trademark application refused due to naming similarities

A trademark application from Specialized for a possible new product named 'Aethos' has surfaced amid rumours of a new bike model, with the application currently refused due to "potential confusion" with an existing mark named Athos
by Jack Sexty

As we reported last week, rumours of a new bike from Specialized flew around the internet when Bora-Hansgrohe rider Daniel Oss shared photos of a previously unseen model on social media... and at the same time, it appears the brand are embroiled in a trademark dispute over "the likelihood of confusion with a registered mark", having been refused a trademark registration on 20th August for a product named "Aethos".

Man, the TDF is good, but, I can’t wait to break the rules a bit and #JustRide on my new machine after all the racing is done. I love that Specialized is all about the ride! (Also, Peter, please don’t touch!) Always more to come. #breaktherules Photos by @cyclingimages

Oss' post, shared by Peter Sagan and with words that look they they've come straight from a marketing department, reads like a sneak preview of a new bike, which fired up the rumour mill late last week. Since our original article, the latest UCI list updated on the 21st September now features a product from Specialized named 'Aethos'; confirming that the brand have had a frame or fork with this name approved by the UCI.

Coincidentally (to our knowledge so far, anyway) the trademark application that Specialized had refused on 20th August was also for a product named Aethos. The latest update on the USPTO report says: "A final Office action refusing registration has been sent (issued) because the applicant neither satisfied nor overcame all requ[ests]".

A quick Google search reveals that the top-ranking results for Aethos are a consultancy firm, and the name of a high-end amplifier from the British audio equipment manufacturer Rega; but the detailed USPTO report document reveals that the dispute stems from an existing mark named 'Athos'.

While a web search of that will direct you to a character from The Three Musketeers first and foremost, the report reveals that Athos is also the name of a German company that sell truck tyres.

Even though the report says 'Aethos' was applied for under the 'Bicycle frames; Bicycles' class and Athos is registered under 'Rims for vehicle wheels; tyres for vehicle wheels', the trademark examining attorney said there is 'likelihood of confusion' between the two marks for a number of reasons. The first is the similarity in the naming, with the report saying: "As previously discussed, the marks create a substantially similar commercial impression because the applied-for mark, AETHOS, differs from the registered mark, ATHOS, by only one letter. Applicant has merely added the letter “E” after the letter “A” in the term. Thus, the marks are highly similar in terms of appearance."

Specialized dispute this, arguing: "The “AE” combination of letters is uncommon in the English language, therefore the applied-for mark distinctively is dissimilar from the registered mark."

The other issue, according to the trademark examining attorney, is that a number of bike brands also sell tyres, which could lead to confusion. Links to tyres from brands such as State Bicycle Co., Trek, Schwinn and Surly are included as evidence; curiously there is no mention of Specialized, even though the brand themselves also sell tyres.

The examining attorney summarises: "As previously discussed, applicant’s bicycles and bicycle frames are highly related to registrant’s tyres for vehicles. The previously attached definition from the Merriam Webster Dictionary shows that a “vehicle” is “a means of carrying or transporting something.” Thus, a bicycle is a type of vehicle."

Specialized once again dispute the likelihood of confusion, saying that their goods "are different and are used for different purposes" to those of Athos, who we think are the German truck tyre company. Specialized also argue that their goods travel in different channels, and they are sufficiently "sophisticated" and "expensive" enough for consumers to likely recognise and differentiate the marks.

Specialized have form on the other side of the fence when it comes to trademark battles, the most notable being a threat of legal action against a Canadian bike shop named Café Roubaix back in 2013. Specialized argued they had trademarked the name 'Roubaix' for the Specialized Roubaix bike model; but after the legal battle hit headlines worldwide and customers threatened a boycott of their products, Specialized' founder Mike Sinyard called Café Roubaix's owner Dan Richter to agree that he could continue to use the name.

When road.cc asked Specialized about this latest dispute, they wouldn't confirm if the trademark application had anything to do with the launch of a new product. When will this saga end? The USPTO say they must receive the applicant's response to their refusal letter within six months, or the 'Aethos' application will be abandoned... so by February 2021 at the latest, it seems!