Conspiracy theories aside, Chris Froome was back racing his bike at the weekend in the Saitama Criterium in Japan, the host of next year’s Summer Olympics. And he had a shiny new bike with a special paint job to ride to boot.

And you can now buy this very frameset if you want to imitate your hero. Through Pinarello's 'MyWay' customisation scheme you can opt for this finish for an extra £500 over the £6,000 price of the standard frame, with a 90 day lead time and choice of disc or rim brakes. What are you waiting for? The rhino is now joined by Froome’s name in Grand Tour colours. The rhino is a nod to Froome’s Kenyan roots but also to show his support for Unite for Wildlife, a charity that was set up to put an end to the illegal wildlife trade.

It’s not his first rhino. Froome first received a bike with the rhino logo in 2015 with the Dogma F8.

The Dogma F12 X-Light is basically a lighter version of the regular F12 thanks to the Torayca T1100G unidirectional carbon used compared to the T1000 1K in the regular bike. Pinarello has also used a different resin (the glue that holds the carbon fibres together) and apparently even the moulds are different with tighter control over the production process. It all results in a 60g saving for a claimed 720g frame weight. 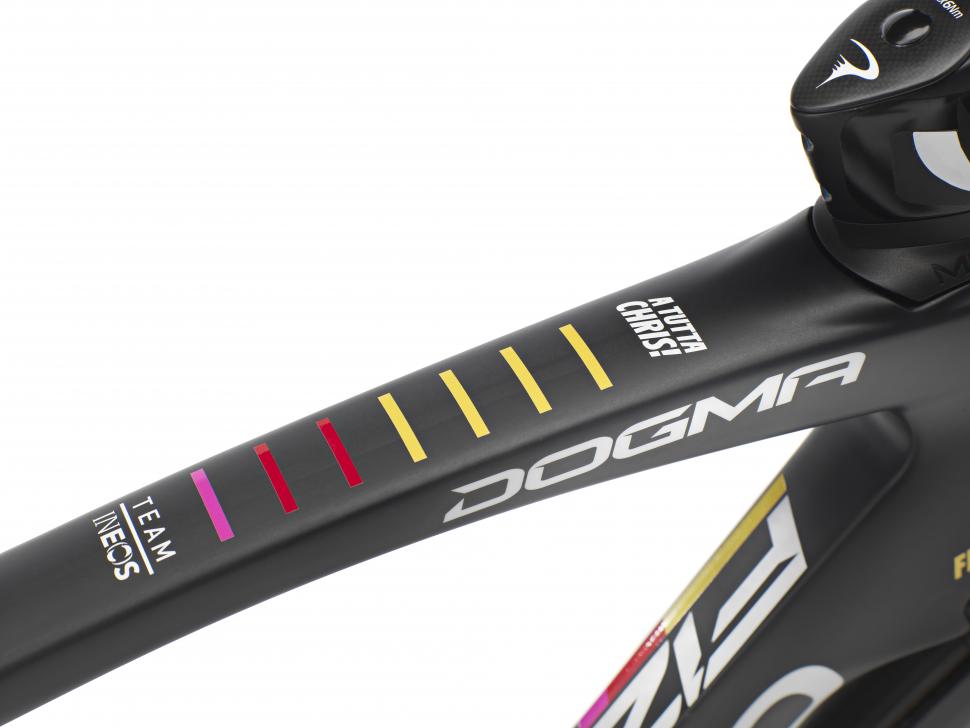 Other than that different carbon, it’s the same as the normal F12. That means an asymmetric frame design, internal cable routing, aero shaped profiles with a Flatback down tube, tapered head tube and threaded bottom bracket. And rim brakes, because Team Ineos and Chris Froome show no sign of switching to disc brakes anytime soon. If you need to take a closer look head over to www.pinarello.com