Shimano has finally recognised the growing popularity of gravel, adventure and bikepacking with the launch of a new groupset intended to meet the demands of riding a drop bar bike off-road. It’s called GRX and I got to ride it over a few days in a very wet and muddy Eifel region of western Germany in the LtD Gravel Raid, a weekend of sweet gravel, food, beer and festival vibes.

For sure it was enough riding time for first impressions, but more in-depth conclusions will be shared here once the sample groupsets that have just arrived in the office are thoroughly tested and reviewed and we can really get under the skin of this new groupset. 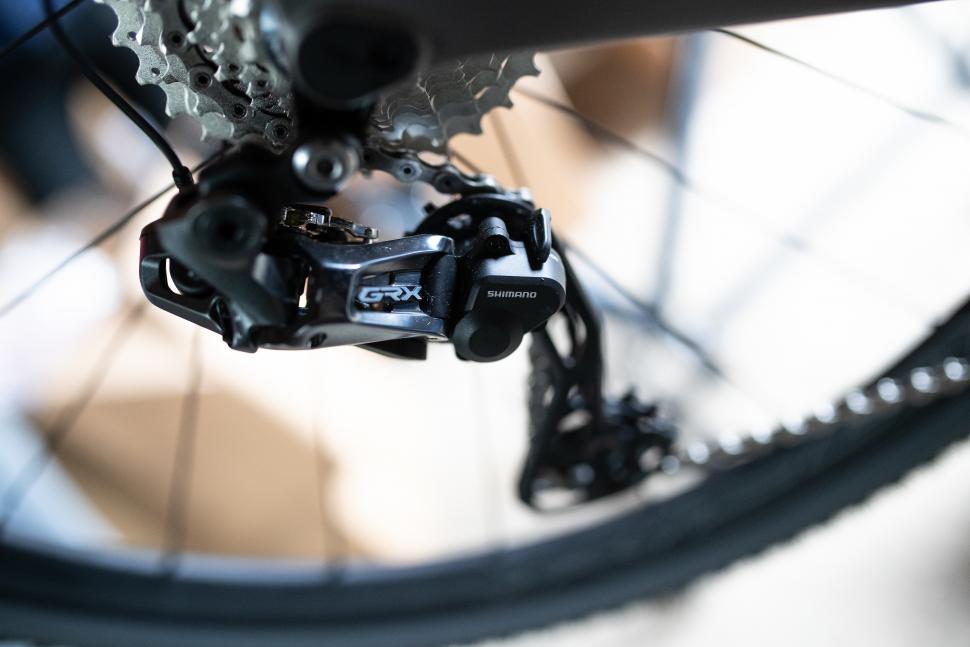 Shimano hasn’t exactly developed an entire new groupset. Instead, it has combined key technologies and components from current mountain and road groupsets and added some brand new parts that lead Shimano to call GRX the “World’s First Dedicated Gravel Component Group." It's a dubious claim given the popularity of SRAM 1x on gravel bikes.

Gravel is different for everyone. The trails you ride, style of rider, how far and fast you ride, all are factors in determining the setup of the bike. And it’s clear that the big component manufacturers have been slow to respond to the DIY tinkering that has been going on for a number of years.

GRX offers a wide range of options then. You can have 1x or 2x, mechanical or electronic, a choice of cassettes and cranksets and three price points, with 10-speed at the entry-level (RX400) and 11-speed for RX600 and RX800 at higher price points. 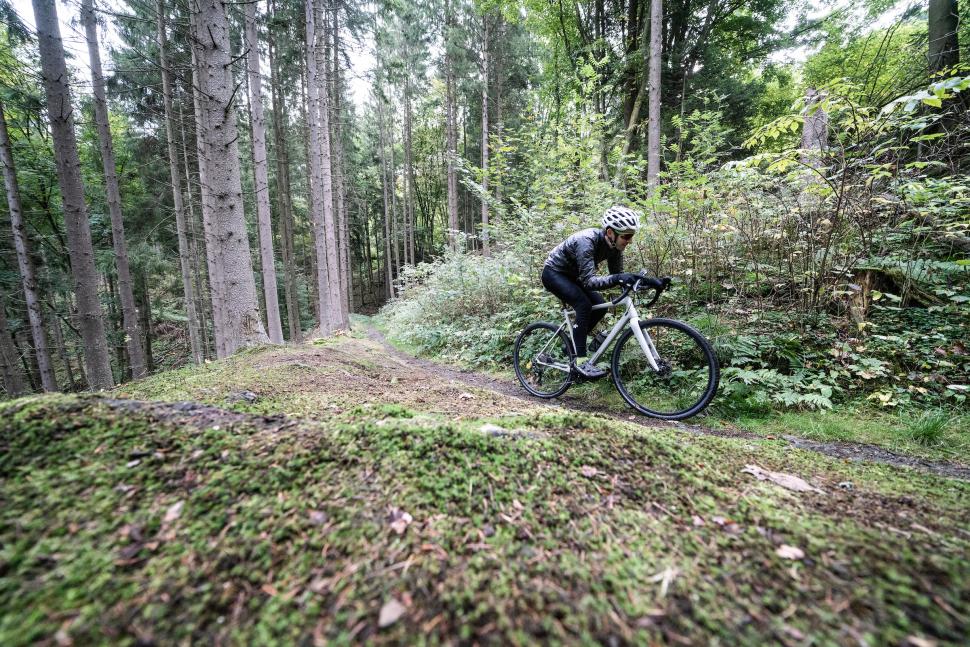 It was off to western Germany for the LtD Gravel Raid, a gravel event organised by Laurens ten Dam and now in its second year, that served as the backdrop to three days of gravel riding. The weather was sub-optimal, very wet and muddy, but adverse conditions are good for testing a groupset and the easy-going vibe, great food and copious amounts of beer offered by the event ensured it was smiles all around rather than glum faces. The majority of my time was on the range-topping RX800 in a 2x configuration, and I got to ride both mechanical and electronic Di2 versions. I also sampled three different bike builds a Santa Cruz Stigmata, Canyon Grail (above) and Orbea Terra.

I had hoped to ride a 1x configuration but the few bikes with a single ring weren’t my size, so that’ll have to wait for a future test.

Riding the groupset over three days in tough conditions provided lots of first impressions. Let’s start with the biggest difference and in my opinion the most successful aspect of the new groupset: the new hoods.

Put your hands on the hoods and, provided you’re familiar with Shimano’s current groupsets, you’ll notice they’re quite different. The result is much-improved control, comfort and braking when riding down steep descents or slithering down a muddy path. Shimano has spent a lot of time studying the demands of riding a drop bar bike off-road on challenging terrain. A key change is the higher braking pivot which makes braking in the hoods easier. The lever has also been reshaped and is wider, and there are textured ribs on the hoods for more grip in slippery weather.

The change is more pronounced on the Di2 shifters. Because the electronic gubbins takes up less space compared to the mechanical components, Shimano has had more freedom to really produce a hood shape that feels fantastic in the hand. The top part of the hood curves back, letting you hook your hand into the hood for a more secure grip. It leads to an enhanced sense of control. On the many fast gravel tracks that made up the choice of route distances on offer in the LtD Gravel Raid event, this was certainly appreciated. The raised ribs provide better grip in the rain and when your gloves are soaked and covered in grit.

Another reason the braking is improved on the Di2 levers is the addition of the company’s Servo Wave Technology from its mountain bike brakes. This alters the lever feel with more progression. The first part of the lever travel is very light and the brakes respond instantly, with the progression leading to easier modulation of braking power as the terrain gets rowdier.

Gearing is a key talking point with gravel and adventure bikes. Gravel riding is different all over the world and having a groupset that can be adapted to these changing requirements has been the aim of GRX. Shimano has sought to offer a wide range of choices based around both 1x, a first for Shimano, and the smallest 2x chainsets it has ever produced. It’s fair to say SRAM has taken a lead in the gravel bike market with 1x, so it’s great to see Shimano finally offer a dedicated 1x groupset that doesn’t require a bit of tinkering. The pros and cons of 1x versus 2x have been regularly debated and argued here on road.cc so I won’t go over them again here.

GRX is the perfect response to gravel bikers who want lower range and it’ll hopefully mean we’ll see more bikes being sold with the sort of gearing that riding off-road requires, moving these bikes further away from road racing that has been the single biggest influence on bike and component design for the last several decades.

I can also see road and touring bikes making use of this new chainset for lower geared setups.

So how does GRX perform then? Over several days of riding the GRX groupset in tough muddy conditions, it performed faultlessly. The weather was atrocious at times, big puddles of mud, slippery rock slabs and roots of evil, and the bikes were pasted with grime at the end of each day. 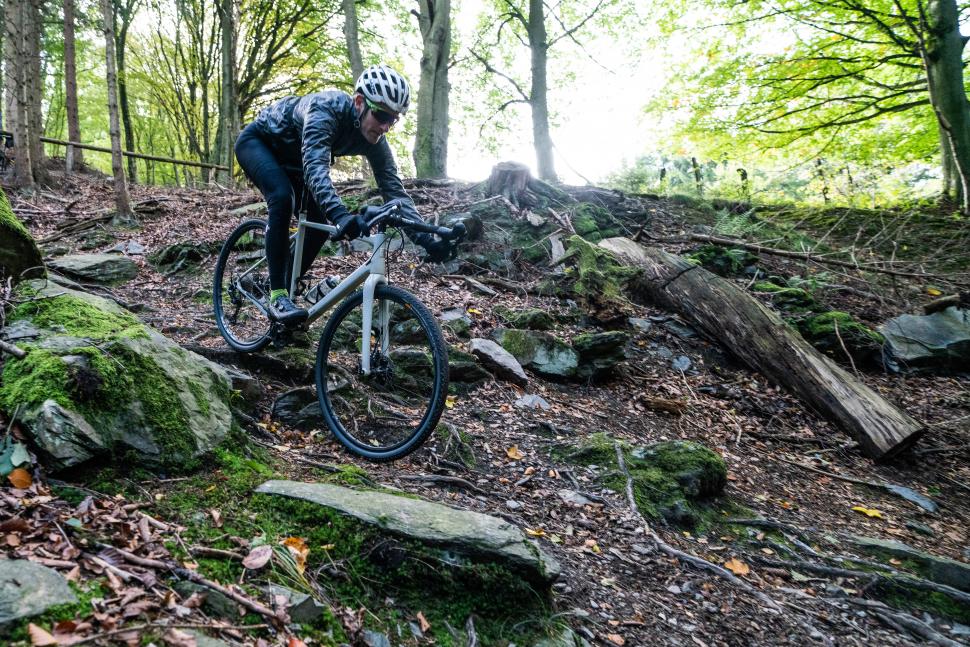 Despite such testing conditions, the GRX groupset, both mechanical and electronic, kept changing gear with the usual metronomic precision that Shimano groupsets are known for. I suffered no miss-shifts at all, no grinding gears, no evidence that it couldn’t cope with grimy riding.

The mechanical groupset worked beautifully. It is a testament to the performance of a modern cable operated groupset. Front shifts coped well despite that 17t jump between the two rings and being asked to do so in adverse conditions and with a regularity that rolling terrain requires.

Shimano popularised electronic groupset with Di2 many years ago. GRX Di2 is a clean shifting groupset that proved unflappable over the three days of riding. I regularly asked the groupset to change gear in extreme circumstances, deliberately shifting under load, cross-chaining, but nothing I did invoke any reluctance.

The proven clutch-style rear mech and Shimano’s patented chainring tooth design ensured the chain stayed in place over the roughest tracks. No chains were dropped. No noise from the chain slapping the chainstay.

The brakes coped with demanding high-speed descents and awkward low-speed tight downhills. The flat-mount callipers and rotors are carried over from Ultegra with the same calliper design and rotor sizes, and as such the braking performance was familiar, powerful and consistent. Adding Servo Wave Technology from its mountain bike brakes to the Di2 brake levers gives a noticeable boost in modulation over the mechanical stoppers. It’s maybe not quite enough alone to justify the extra cost, but taken with the precision of the electronic gear shifts, it’s the groupset for me.

Flying home from Germany, a suitcase full of wet and muddy riding kit but great memories from partaking in an enjoyable event that genuinely manages to combine a laid-back vibe with a festival atmosphere and none of the seriousness of most bike races, with some sweet gravel tracks and the odd professional roadie, my conclusion with GRX is mixed.

On the one hand, I’m glad Shimano has finally launched a groupset to meet the needs of gravel bikes with a wide range of options to suit different riders and budgets. There’ll be a lot of new 2020 bikes specced with GRX which is a good thing. I'm fed up of 50/34t compact chainsets on gravel bikes. It’s just a shame Shimano wasn’t a little braver in offering a game-changing groupset to serve as a serious riposte to its rivals and offer the low and wide-range gearing that many people flocking to gravel bikes want. There's hope that Shimano's conservatism means bigger cassettes might work. It's also a shame you can't mix and match the 1x and 2x versions,

The GRX Di2 levers left the most lasting impression for me, however. More expensive they may be than mechanical, but the slick-shifting, powerful braking and ergonomics mark them out as the best part of the new GRX groupset. I might even go as far as saying they’re the most comfortable hoods of any groupset on sale right now.

I expect there’s more to come from GRX in the future though.

We’ll also have more in-depth reviews of the new groupset here on road.cc and over on off.road.cc in the next few months as well once testing has commenced on those, so stay tuned for more on GRX.