The latest version of the Trek Domane is launched today – an endurance bike that has seen plenty of success at the highest level since being introduced in 2012 – and it’s a ground-up redesign that increases both speed and comfort.

IsoSpeed: a bit of history 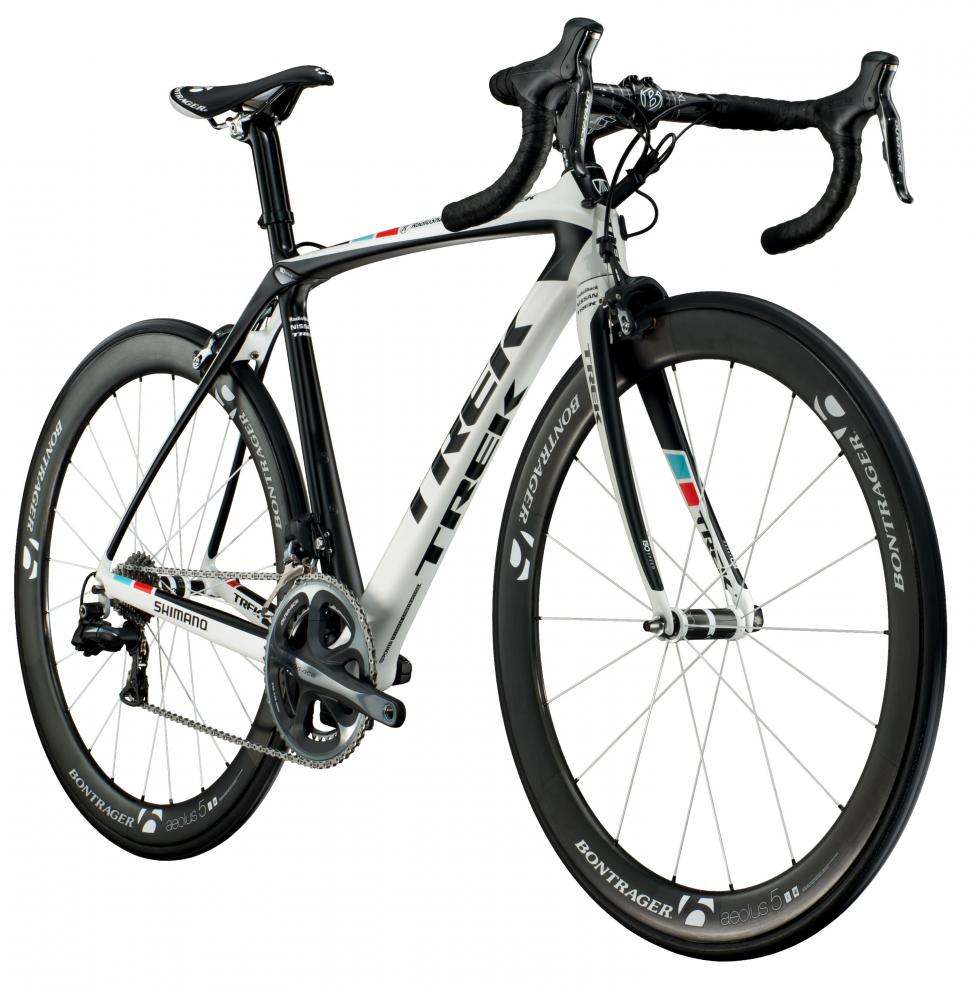 The Domane was one of the first of the new breed of endurance road bikes and the IsoSpeed decoupler was revolutionary when it launched back in 2012. It worked by decoupling the seat tube from the top tube, and using that seat tube as a sort of spring lever to add some suspension flex at the saddle. It was a clever system, and it worked, but it had limitations: it wasn’t tunable for rider weight, and the behaviour depended on the seat tube length, so smaller bikes got less cush. 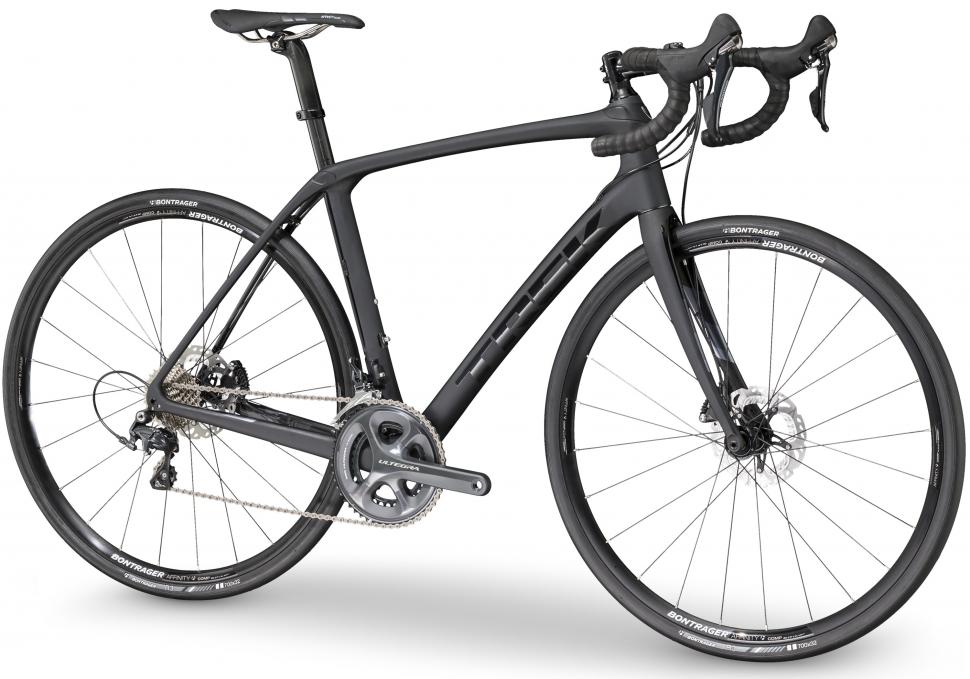 Skip forward four years and and a new Domane hit the streets. Well, cobbles. The second generation bike got an updated rear IsoSpeed system on the seat tube, and it also premiered the front-end IsoSpeed system which utilises a pivoting collar within the head tube to add compliance at the front too. 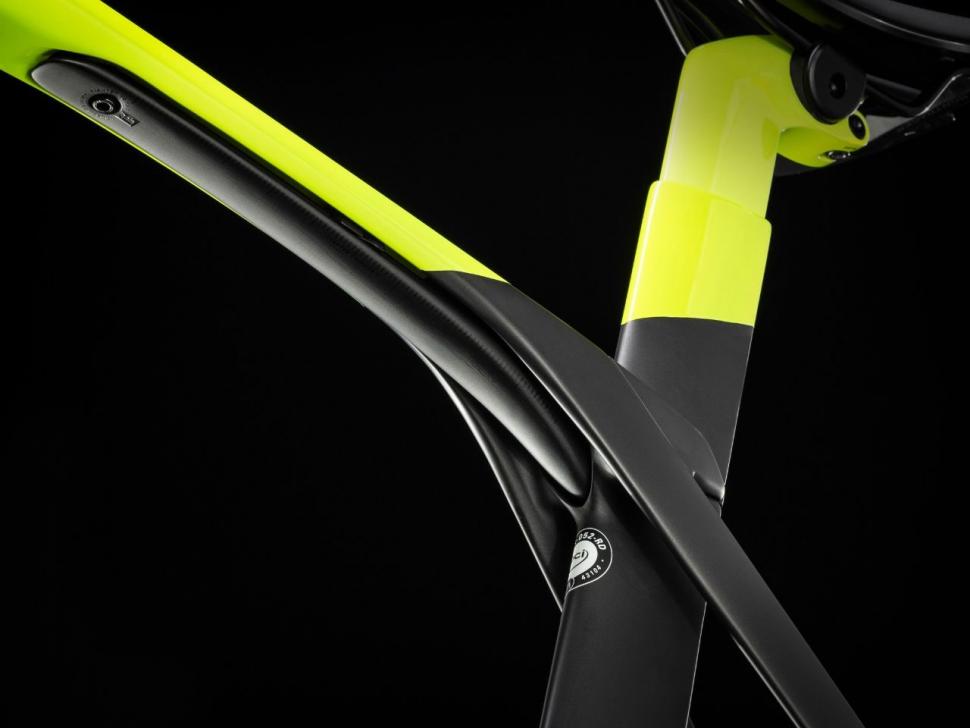 When Trek launched the new Madone, that got rear IsoSpeed too, but a new version: the spring lever was rotated 90° to sit under the top tube. A rubber elastomer damper was added too, to tame the suspension a bit and make it smoother. And it’s that system that has now been migrated, in a slightly modified form, to the new Domane. Trek says it offers 27% more compliance than the previous bike. We do love a good stat here at road.cc. The compliance is tuned to bike size, so smaller bikes are bit softer to take into account the fact that their riders are probably lighter.

Only the top-end SLR bikes will get the new IsoSpeed. The SL bikes get the seat tube IsoSpeed from the previous model. 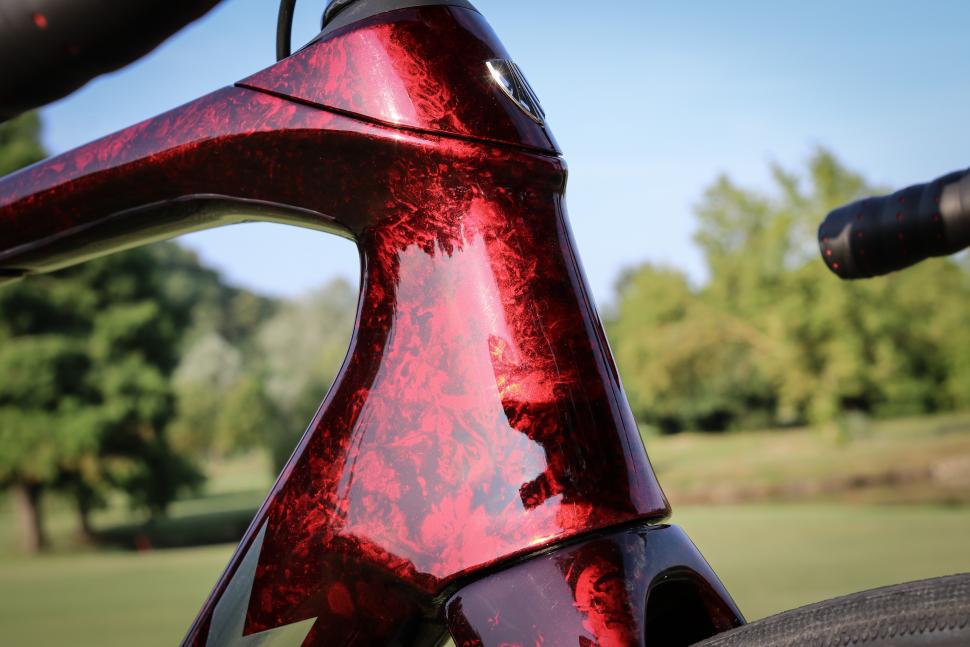 Even your cobbles bike is aero these days

The new Domane is more aerodynamically effiient than the last one too. Trek claims that it’ll save you 12W at 40km/h over the old bike, and that adds up to a minute if you’re riding for an hour at that speed. Obviously, riding for an hour takes, erm, an hour, so what they mean is that 40km will now take you 59 minutes.

How aero is that? Well, it’s about midway between where the old Domane was and where the Madone is now. So a meaningful change. There’s been a lot of work on the tube profiles and more evidence of the truncated airfoil profiles that Trek uses extensively on the Domane.

The cable routing has been completely redesigned too, with the cables entering behind the steerer to keep them out of the wind as much as possible. The system is fully compatible with standard bars and stems, so you’re not stuck with a specific setup at the front. Trek continues to offer IsoCore bars, which feature an elastomer in the bar itself, and IsoZone kits which use Gel/EVA padding under the bar tape. 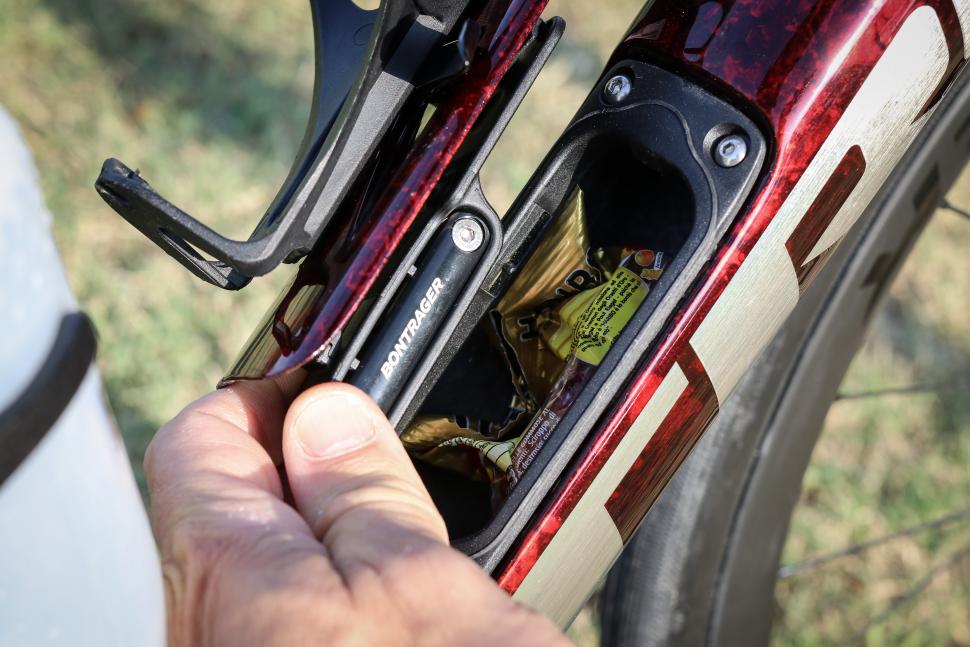 Hey! You've got to hide your stuff away

Want to carry a tool roll and a spare tube, and maybe a lightweight jacket? Now you can just stuff them inside your down tube. The new Domane has a removable plate where the bottle cage sits; flip a lever and you can access space inside the tube. The cover has a multitool slot, and Trek also offers a tool roll specifically designed for the space. You can also stuff packets of Haribo in there, as you can see. 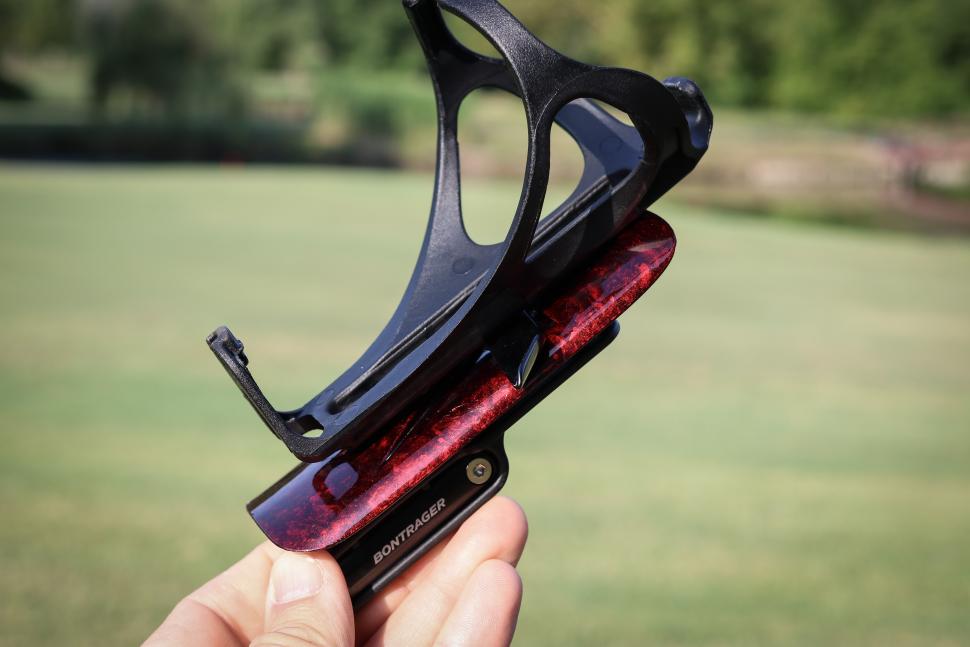 Why stick your stuff in the frame? Well, it’s neater, and might save you a few more precious watts if that’s a thing that worries you. It also allows Trek to use the same Bontrager Flare R seatpost mount that they use in the Madone, so you can have an ideally-placed daylight running light on the back. That’s something Trek is quite keen on. 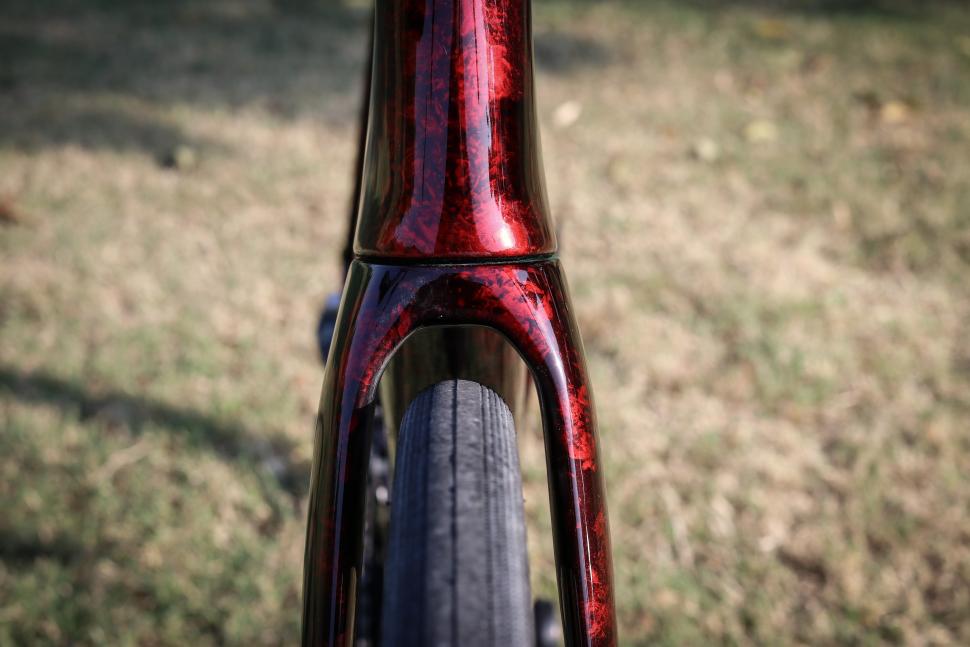 Big tyres (for a road bike)

Some pros have been racing Paris-Roubaix on 30mm tyres for ever, so big tyres aren’t a new thing on endurance road bikes. The amount of clearance you get on the new Domane is, though. There’s room for a 38mm tyre front and rear, and that’s a conservative maximum with 2mm allowed either side for tyre variation and 4mm of clearance. Realistically, a 40mm tyre would probably fit okay, although 35mm is the maximum if you’re fitting mudguards. Like its predecessors, the new Domane has full mudguard mounts hidden away if you need them. 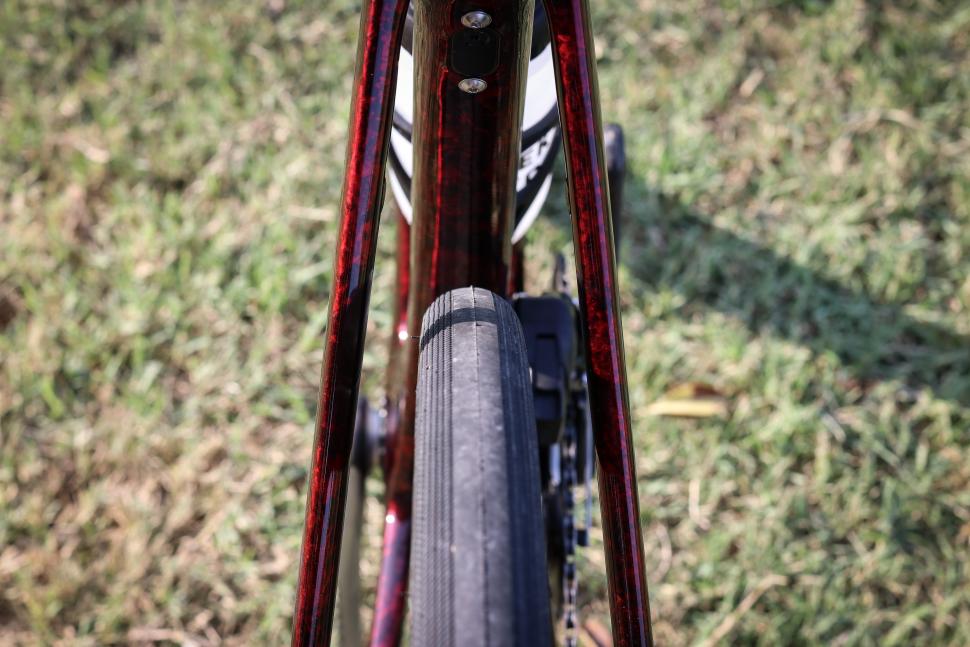 38mm is the kind of clearance you were getting on adventure bikes a few years back, so for a top-end road bike it’s huge. Trek is speccing most of the Domane range with 32mm tyres. They’ve developed their own tyre, the R3, which is reminiscent of a Schwalbe G-One Speed in its shape and tread profile, and that’s no bad thing.

Trek has moved back to threads in the bottom bracket. Threaded BBs are less of a faff to fit, less likely to creak and easier to replace. What’s not to like? Well, with a standard 68mm bottom bracket with external cups the width is the thing that Trek mostly doesn’t like, as it says that the wider internal solutions offer better stiffness. 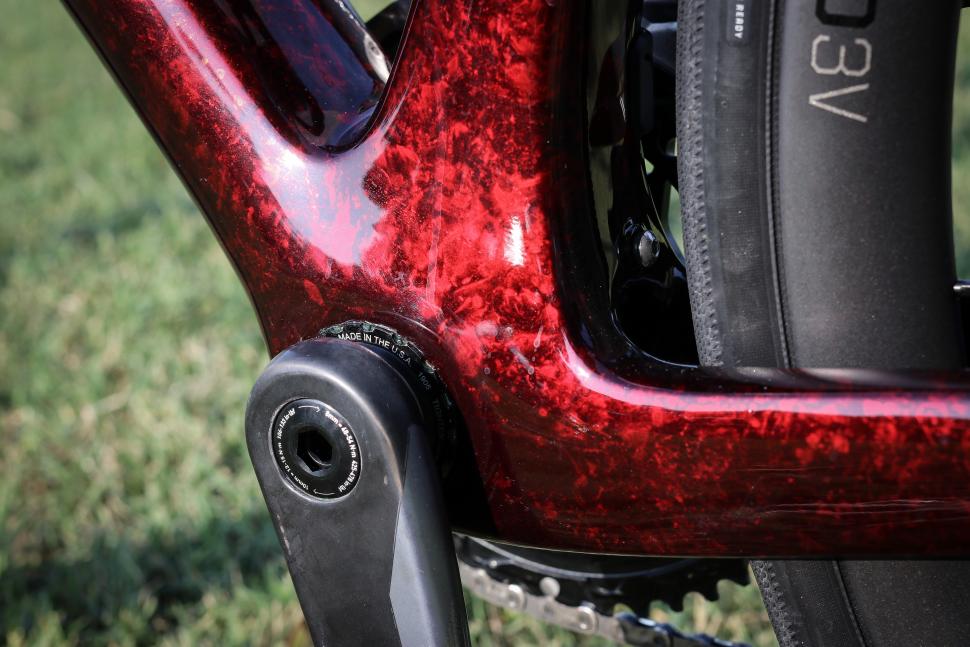 The T47 internal bb standard is a good compromise. Nearly all of the bottom bracket is inside the frame, save for a thin flange that engages with the BB tool. That means you can maintain the width of the bottom bracket, but still have simple-to-service threaded bearings, so everyone wins.

Trek has hacked the standard slightly; they’ve made the BB shell 1mm narrower so it can add 0.5mm of extra material to the tool flanges to make it easier to remove them. It’s compatible with all off-the-shelf T47 internal BBs, though.

Awesome bikes for everyone

Awesome what now? Well, this is Trek’s new tagline for their non-gender-specific sizing and colouring options. At this top level, Women-Specific Design (WSD) is a thing of the past. All the Domane bikes will be available in two colour schemes in all sizes from XS to XL. So you just pick the one you fancy in the colour you like. Some of the component changes that were part of the WSD offering – shorter reach levers, for example – are carried over to the smaller bikes across the range. 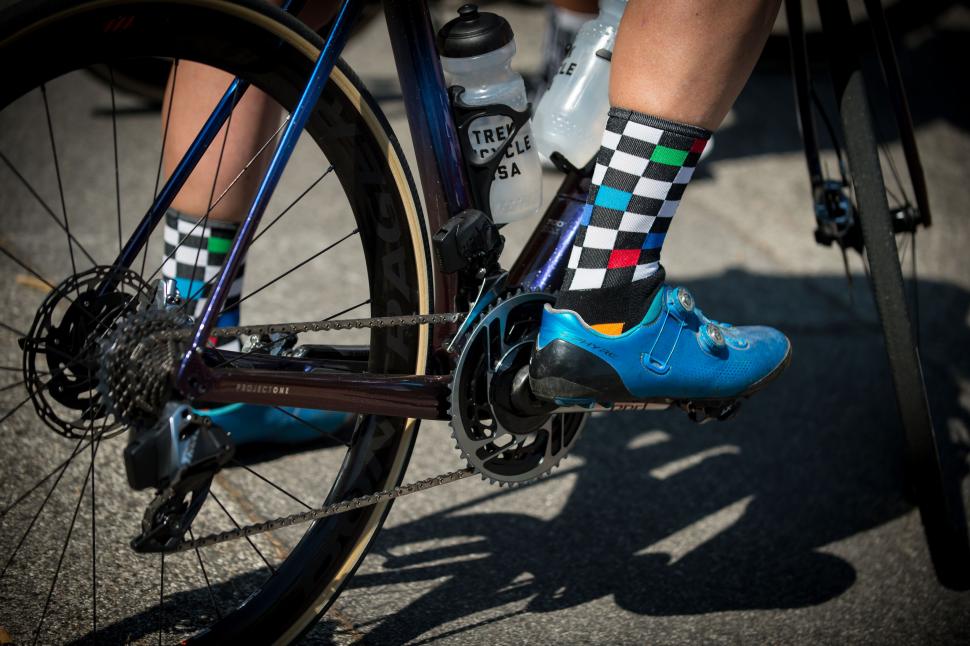 I got some time aboard the new Domane at the press launch in Galzignano in northern Italy. We worked our way round a 45km loop that included plenty of climbing and (pretty decent) tarmac, as well as some lengthy gravel sections, some of which were near the limit of what you’d be comfortable on on a road bike, even one with 32mm tyres.

The main take-home from the ride is that the bike is really, really smooth. How much of that is down to the big tyres and how much the IsoSpeed doing its thing would require more time (and wheel swaps) than was available at the launch, but it’s certainly a comfy bike.

There’s plenty of stiffness in the frame in spite of the cushioned ride. Get out of the saddle and give it some welly and there’s no noticeable flex through the core of the bike; the new Domane responds very well to rider input.

The big tyres don’t feel slow or wallowy on the road sections (they had about 60psi in them) and once you hit the gravel they offer plenty of grip and cushioning. They’re a bit fragile for the rockier stuff – I put a hole in one of mine that the tubeless sealant wouldn’t fix – but they’re really designed more for road and graded surfaces. Trek says that below 20mph the bigger tyres are faster for nearly all riding; certainly they didn’t feel compromised. 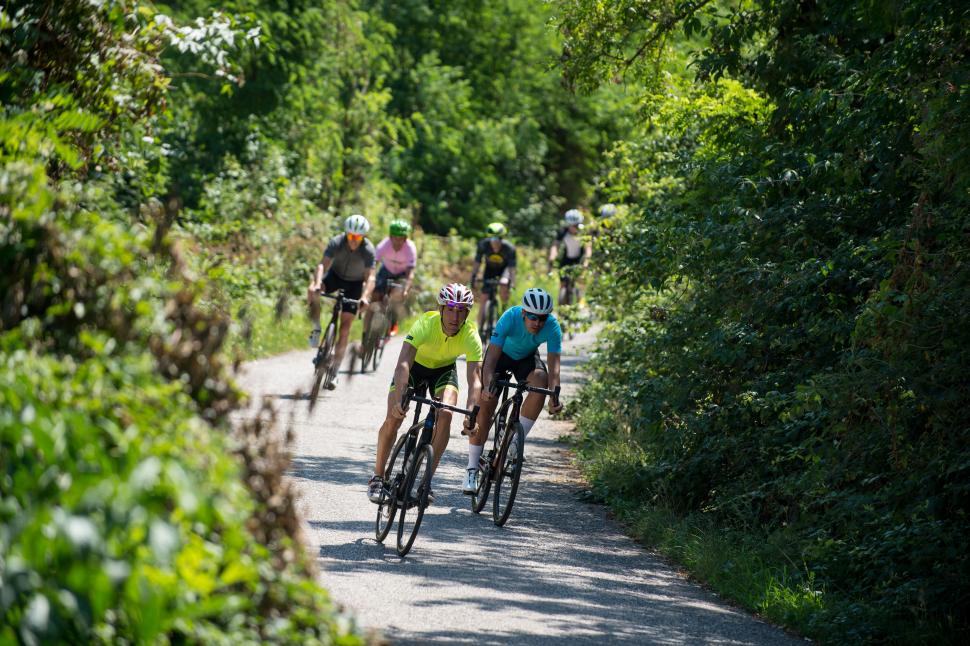 A couple of hours on unfamiliar terrain isn’t a particularly useful test, of course, so we’re waiting for our test bike to put it through its paces on the roads (and trails) we know well.

The bikes should be available in the UK from the end of July.