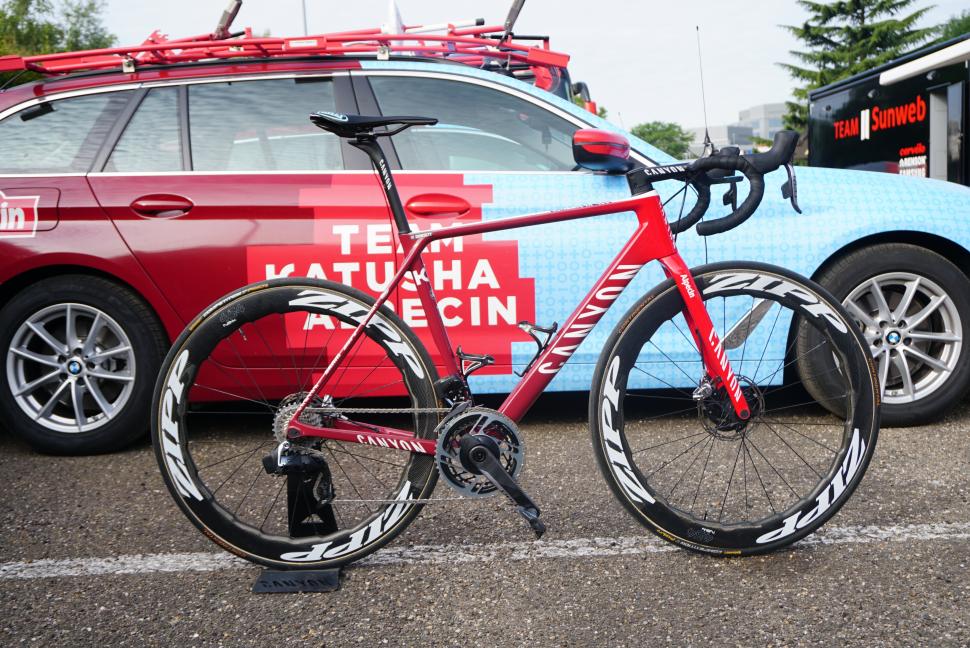 11 of the lightest bikes at the 2019 Tour de France feat. Trek, Cannondale, Canyon, Specialized and more

Designed to be as light as possible, these are the bikes the GC contenders will rely on for the race to Paris
by David Arthur @davearthur

You’ve read all about the aero bikes being raced in this year’s Tour de France, bikes that are ideal for sprints and breakaways. As the race heads towards the mountains it’ll be the turn of the lightweight bikes to come to the fore, so here are some of the most interesting. Trek launched the Emonda to fill the gap vacated by the Madone as that model gained even more aerodynamically shaped tube profiles. Now in its second generation, the Emonda has a claimed frame weight of just 640g, but the team is using the Emonda Disc which tips the scales to a claimed 665g.

Such a light frame bodes well for a bike that is very close, if not on the UCI weight limit. The frames are decked out with SRAM Red eTap AXS this season with a full suite of Bontrager parts. 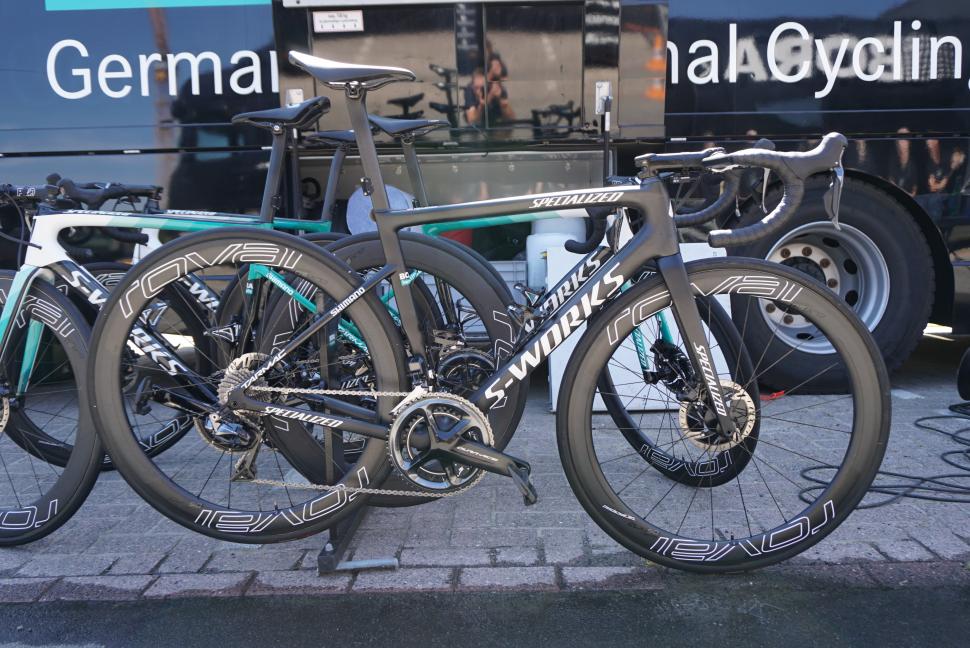 The Tarmac Disc the favoured choice of Bora-Hansgrohe by those riders with GC hopes or at least stage wins in the mountains. The Tarmac is Specialized’s lightest offering, with this 6th generation mode coming in with a claimed 800g for the disc version, and 733g with rim brakes.

Specialized will sell you a top-end Tarmac Disc with a power meter weighing 6.6kg, so it’s likely the team bikes are bang on the UCI weight limit. 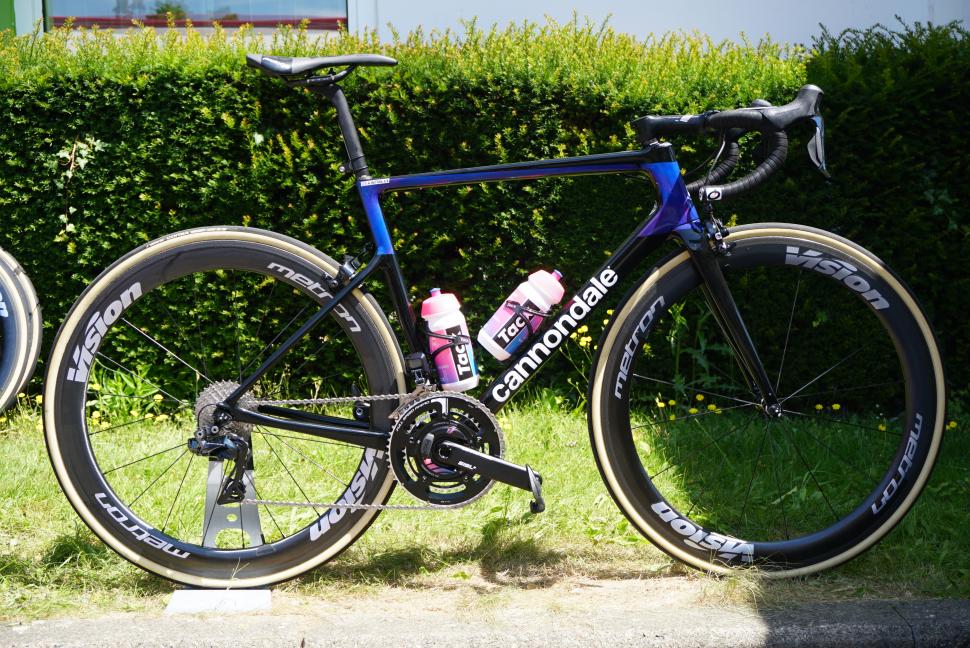 Cannondale’s completely redesigned SuperSix Evo comes in at a claimed 866g for a 56cm disc frame. With all the Dura-Ace Di2, FSA and Vision parts of the team bikes, that’s good enough for a 6.66kg weight, judging by this widely shared photo posted by the team on social media recently.

The rim brake bike will be lighter and it’s interesting that the riders get to choose which brakes they use, discs or rim brakes. 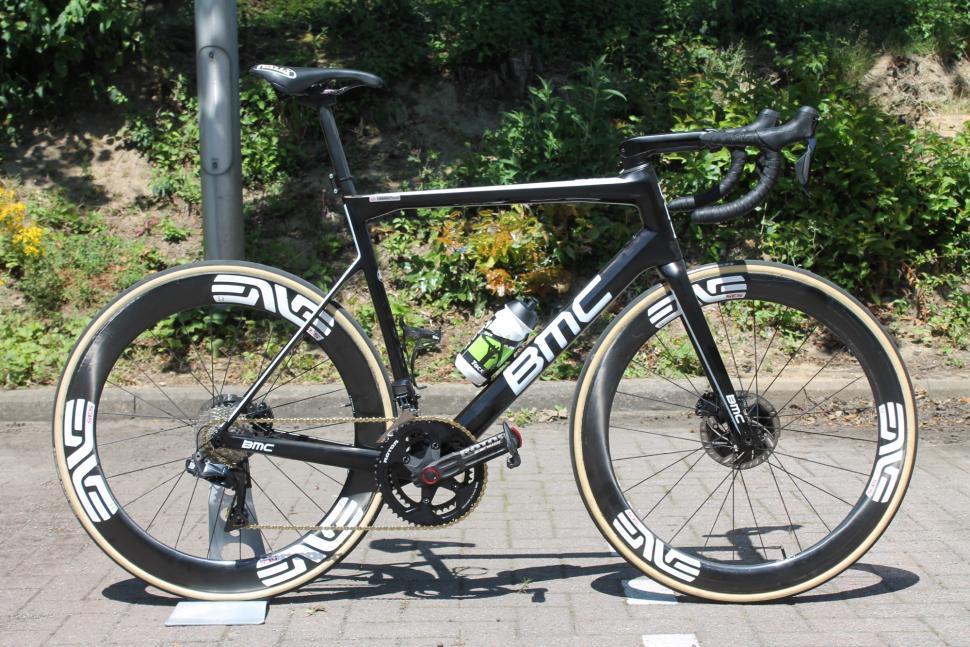 Swiss brand BMC has been constantly tweaking its Teammachine SLR01 over the years, and the latest model introduced last year made it the lightest yet. A claimed 815g for the disc frame makes it pretty light, and it’s just 25g heavier than the rim brake frame.

The Dimension-Data team are all on disc brakes this season with Shimano Dura-Ace Di2 gears and brakes, Enve wheels with rim depth to suit the course and Rotor aluminium cranks.

To help shed a bit more weight, some of the Dimension-Data team bikes had a special paint finish that apparently saved up to 200g. It’s basically a thinner coat of paint, to the point that you can see the carbon weave in places. 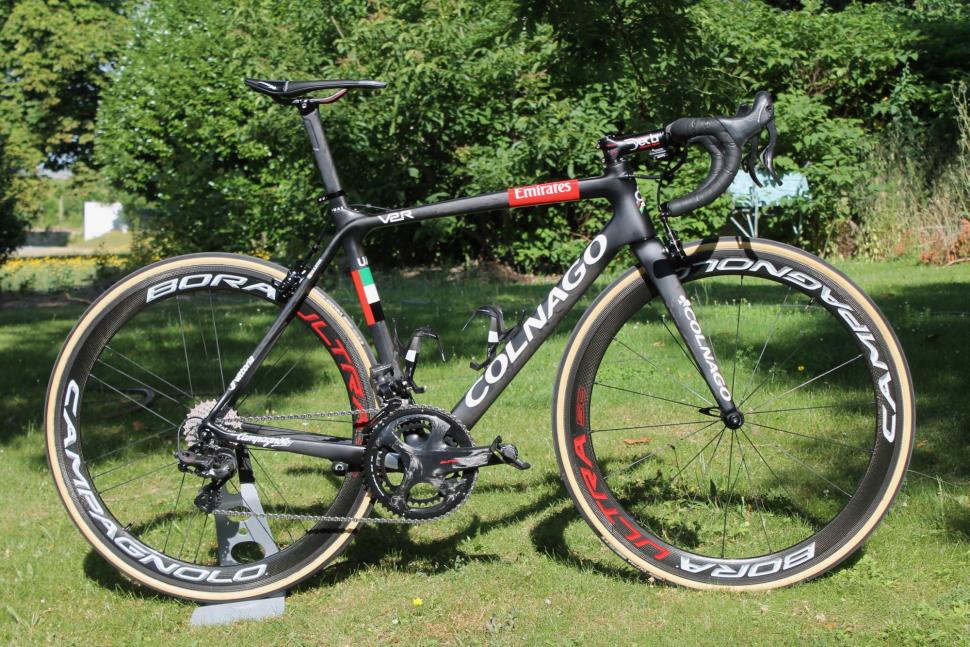 This team have a choice of Colnago models to ride, but there were no C64 bikes to be spotted at the team truck before the race. Dan Martin has instead been racing the V2-r, introduced in 2017 with a sort of semi-aero frame design that also leans on weight waving. Claimed frame weight is 835g.

Aside from clear weight-saving measures, the V2-r packs some neat aero features into the frame that Dan Martin will surely appreciate. The main tube profiles are truncated shapes, all cables are internal, there is an aero seat post and internal seat clamp, and there are direct mount brakes.

Another team that has fully embraced disc brakes, this is Alex Dowsett’s Ultimate CF SLX Disc. Canyon claims a size medium frame weight of 820g which is about 70g heavier than the rim brake version.

Dowsett has got a brand new SRAM Red eTap AXS groupset to help keep the weight down, and he started the race on Zipp’s NSW 454 wheels. He might switch to shallower carbon wheels in the mountains. Like Alpecin-Katusha, Movistar is sponsored by Canyon. With most of the team a powerhouse of climbing talent, the Ultimate CF SLX was the main bike of choice. The Aeroad isn’t a very popular model with this team, they clearly prefer weight over aero.

Keeping the weight down is Campagnolo Super Record EPS 12-speed groupset. Some of the team were using Canyon's carbon H36 Aerocockpit, a one-piece design, some other riders opting for regular two-piece setups.

Will either of the Canyon sponsored teams be breaking out the new Ultimate CF Evo Disc with its claimed 641g frame weight? We don’t know, but we’ll be watching both teams in the mountains very closely to see. Obviously, the mechanics will need to add extra weight in order to meet the UCI’s 6.8kg weight limit. 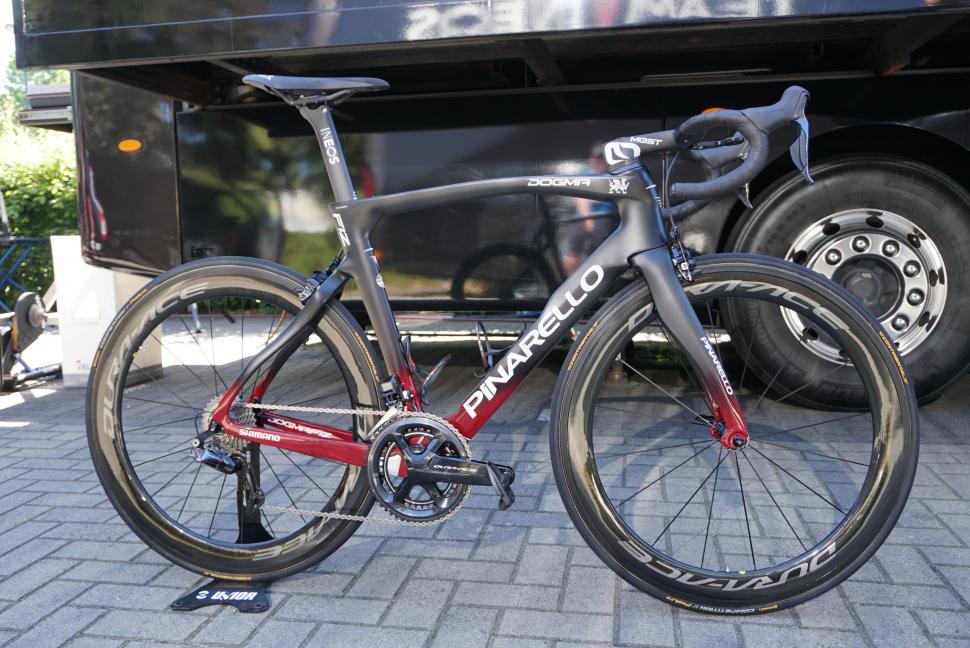 Pinarello has been sponsoring Team Sky since it founded in 2010 and continues this season with Team Ineos, and it has been improving its Dogma race bike quite a bit in that time. The F12 is the latest version, introduced earlier this year, and weighs a claimed 820g, though Pinarello cheats and only provide the raw unpainted frame. Add about 200g for paint and it’s easily over 1kg, making it possibly the heaviest frame in the peloton.

The company does have the Dogma F12 X-Light to offer the team riders on the mountain stages. It shaves a claimed 100g of the weight thanks to a Torayca T1100 UD Dream Carbon, but with it an 85kg rider weight limit. We suspect the entire team are comfortably under that!

Of course, the Dogma F12 offers aero benefits as well, with a FlatBack down tube profile, fork tabs, an aero seat post and seat tube and the use of one-piece Most handlebars to reduce frontal surface area. And if the frames really are the heaviest in the peloton, the Lightweight wheels they have purchased will surely help on the steeper climbs. 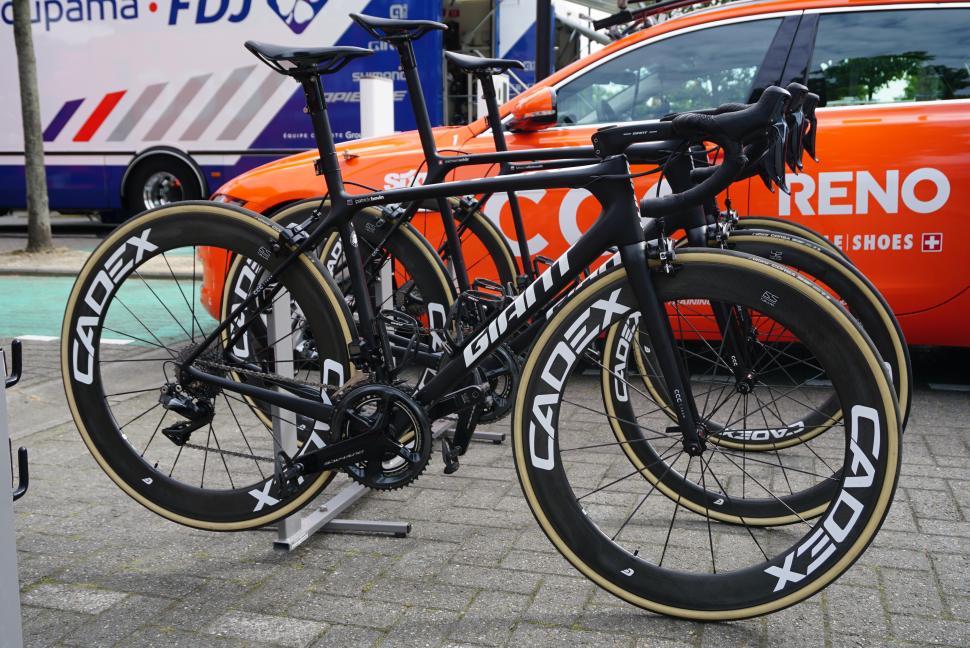 The CCC team is sponsored by Giant Bicycles this year and one of the most bikes the team will use is the TCR Advanced SL. It’s been around for a long time, regularly updated, and is focused on providing the lowest weight and highest stiffness.

Frame weight is in the region of 900g, which sounds heavy but you have to remember that includes the integrated seat mast which has long been a key feature on the TCR. Giant uses this design because it reckons it provides weight, stiffness and comfort benefits.

The team is using new Cadex wheels from Giant, with a choice of 65 and 42mm deep tubular carbon rims. Groupsets are Shimano Dura-Ace Di2 and Giant also supplies the bars and stem. 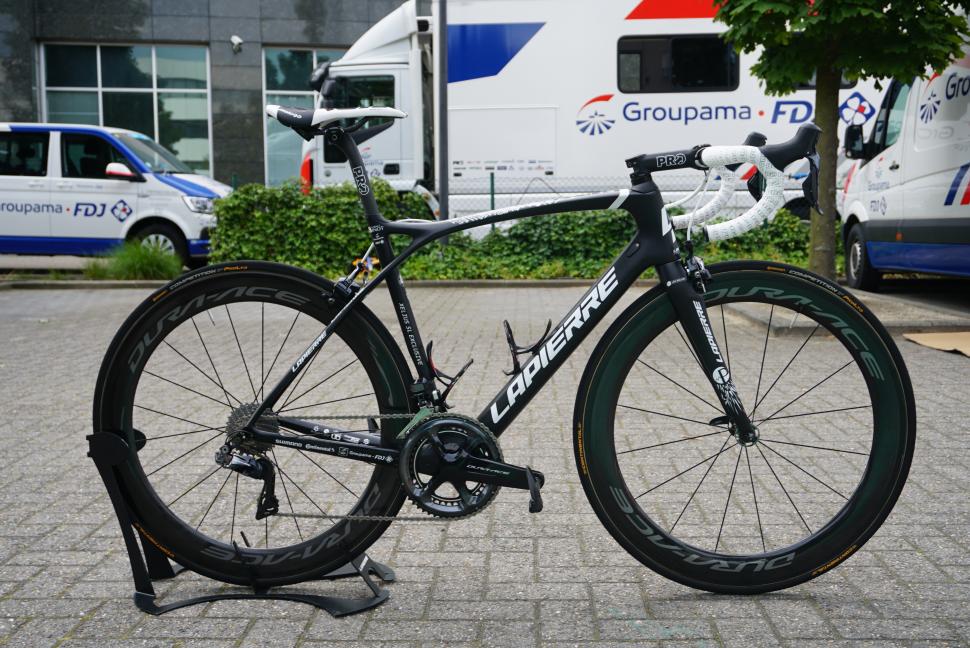 French bike brand Lapierre has designed the Xelius SL to be its lightweight offering, with a claimed frame weight of 850g for a size 54cm. It’s an interesting frame design, with the seat stays wrapping over and around the seat tube, designed to decrease frame weight. It’s also focused on lowering weight in the top half of the frame and ramping stiffness in the lower half for apparently better handling.

It hasn’t down Thibaut Pinot any harm, and we took a close look at his bike the other day. You can see it here 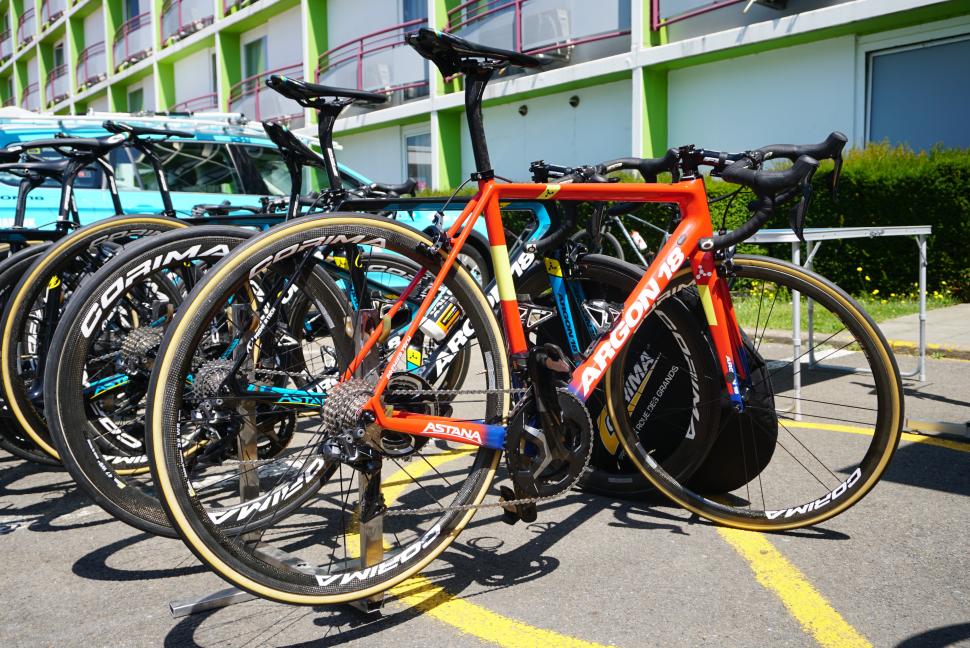 Canadian bike brand Argon 18 offers the Gallium Pro for the Astana riders preferring to ride a lightweight race bike, over the slippery Nitrogen aero bike. The Gallium Pro has a claimed frame weight of 795g make it one of the lightest offerings in this roundup.

There are all the usual features like a press-fit bottom bracket, 27.2mm seatpost, internal cable routing and space for up to 28mm tyres. One distinctive feature is the 3D System which offers three head tube heights for each frame size without compromising frame stiffness. Astana is the only team to use Corima carbon fibre wheels, which are some of the lightest on the market.

Which would you pick?