Specialized has now officially launched the Tarmac Disc, a disc-equipped version of the sixth generation Tarmac race bike that was launched last year.

Initially only available in a top-end S-Works build with a men and women’s version, it’ll cost £9,250. A frameset is also available for £3,250 if you’d prefer to build your own, with a choice of two colours available - dark blue with orange detailing or white with blue and yellow details.

Specialized's launch of the Tarmac disc was not a surprise, it was on the UCI’s list of approved bikes, and there were some spy shots doing the rounds on the internet. Ahead of the bike's official launch road.cc were invited along to the company’s UK office in Chessington to take a closer look, and you can see how we got on in the video at the top of this article. This isn't the first time the Tarmac has been available with disc brakes. Back in 2014 I reviewed the last generation Tarmac Disc which at the time was the lightest race-ready disc bike I had ever tested. Even now, that bike's 6.9kg weight is still impressive.  This 2018 version, including a power meter, drops the weight to 6.6kg. That's progress for you.

The updated sixth generation Tarmac, launched last year at the Tour de France, was a very well received bike. By shedding a load of weight, making it slightly aerodynamic and increasing the compliance and tyre clearance, Specialized created one of the best race bikes currently available.

Rather than go into detail here about all the changes introduced to the new Tarmac SL6, you can read my extensive reviews of the S-Works and Pro model bikes for all the detail, as well as in-depth appraisals of the performance aspects.

But a disc brake version was much-needed, with a growing appetite for disc brakes from consumers not just on endurance bikes built for going the distance but also proper race bikes built for speed and performance. The list of race bikes now available with disc brakes is steadily growing, despite the misgivings of some in the pro peloton… but that’s a conversation for another day. 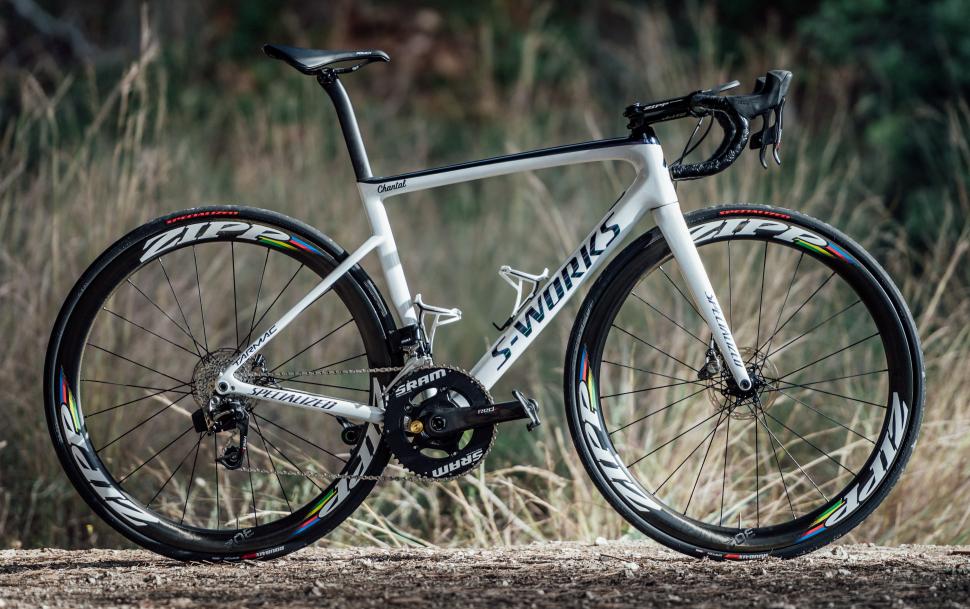 The new disc-equipped Tarmac essentially retains all the key features of the rim brake version but uses a new fork with a 12mm thru-axle, internal hose routing and flat mount for the brake caliper. The new dropouts use a 142x12mm setup again with flat mount and an internally routed brake hose.

Specialized is offering a choice of axles, a flush axle that omits a lever for a 6mm Allen key removal, which saves 30g over regular thru-axles, or DT RWS tool-free levers. Both sets are included with the bike so you can pick whichever system you prefer.

It’s often said by people but disputed by bike brands that have conducted actual testing that disc brakes generate more drag. On this matter, Specialized says the aero performance of the disc Tarmac is identical to the rim brake Tarmac. There’s also no change to the geometry, the only difference is a fixed 410mm chainstay length across the size range, whereas the rim brake Tarmac chainstay length varies from 405 to 410mm depending on the frame size, as part of its Rider Tuned Engineering.

There’s a small difference in the frame weight between the two versions. A 56cm rim brake Tarmac came with a claimed frame weight of 733g, the new disc version weighs in at a claimed 800g for the same size. The fork weighs roughly 338g. Despite those differences, the company is claiming 6.66kg for the fully built S-Works bike, including the new power meter. Compare that to 6.36kg for the Tarmac rim brake bike and you can see there’s really not that much of a penalty on the scales.

What I really liked about the new Tarmac when I tested the rim-braked version is its handling and stiffness, Specialized say the new disc brake bike offers the same performance characteristics. That along with the unchanged geometry means you should be able to hop from one bike to another and not detect any significant change, other than the difference in brake performance. 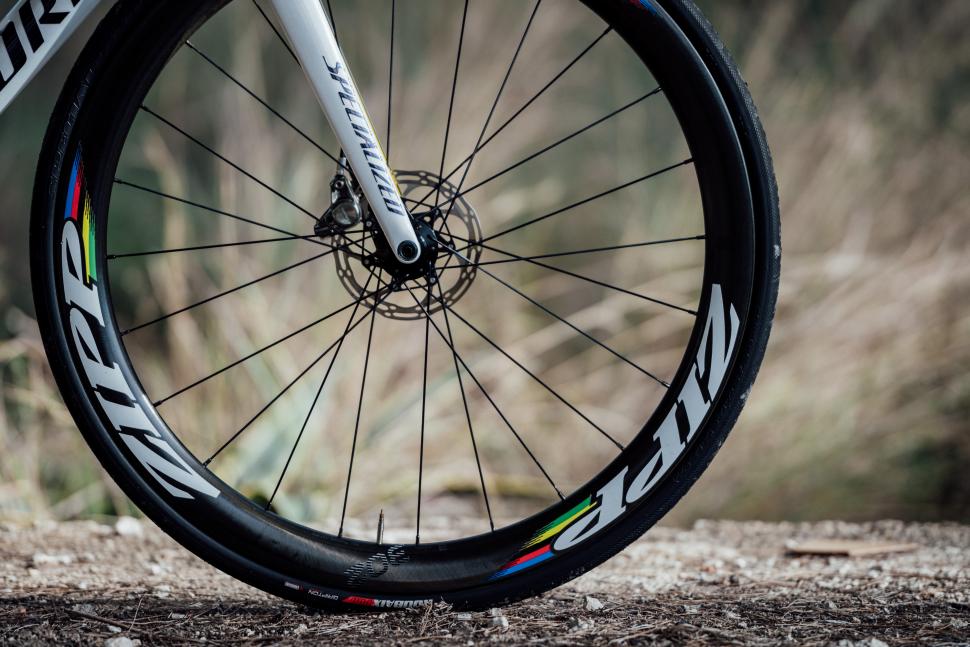 Then there's a full Shimano Dura-Ace Di2 groupset with hydraulic disc brakes, with a 160mm front rotor and 140mm rear rotor. The new Dura-Ace 11-30t cassette features which should combine nicely with the semi-compact chainset to provide a usable spread of gears for most terrains and applications.

Specialized launches its own power meters

As well as launching the Tarmac Disc, Specialized have also entered the power meter market, which is hotting up with more competing products than ever before, with even Shimano getting involved. Specialized set out to create what it claims is the lightest and most accurate power meter, utilising Canadian company 4iiii’s technology but doing a whole bunch of its own development and testing with the Locomotion Lab in Boulder, Colorado to ensure the accuracy meets its bold claims.

The accuracy of each power meter it has developed is a claimed +/-1.5% with temperature compensation firmware, and ANT+ and Bluetooth are both supported for easy compatibility with many third-party devices. Specialized has also developed an app for setup and diagnostics.

The lightest setup, without chainrings, is the S-Works carbon dual-sided power crankset, which weighs a claimed 440g for a 172.5mm crank length. No chainrings remember…

Not content with just offering a single power meter, it is bringing to market four power meters. It wants to offer a power meter for every road rider. Then it has also made a version based on a Shimano Dura-Ace R9100 crankset, and this is the one that Peter Sagan’s Bora–Hansgrohe team is currently racing this season.

And there’s also an Ultegra R8000 single-sided power meter upgrade kit, which much like a Stages power meter it only measures power on the left side. More details including reviews, hopefully, of these new products soon. Let us know what you think of this release in the comments section below.  More info at www.specialized.com