I tested the original Colnago V1-r back in 2014, and for 2018 it has been updated, lighter and stiffer than the original and with revised brakes. It’s now called the V2-r and I took it for a brief 40-mile ride around my local Cotswolds roads as part of the Colnago Owners’ Day sportive recently.

While my findings are from conclusive (we’ll be getting a bike in for a proper in-depth review soon) it’s clear the new bike retains the same engaging handling that I liked about the original but dials up the agility and snappiness. The braking has vastly improved as well, ably demonstrated on some tricky descents on this short first ride.

The original V1-r represented the Italian company’s first attempt at joining the growing aero road bike category. It also replaced the old M10 as Colnago’s go-to race bike where weight and stiffness are key requirements. The frame profiles are shaped using proven NACA (National Advisory Committee for Aeronautics) airfoil profiles, and the effort to reduce drag includes the D-shaped seatpost and internally routed cables, but it’s not really a full aero bike like the Concept that was introduced last year. 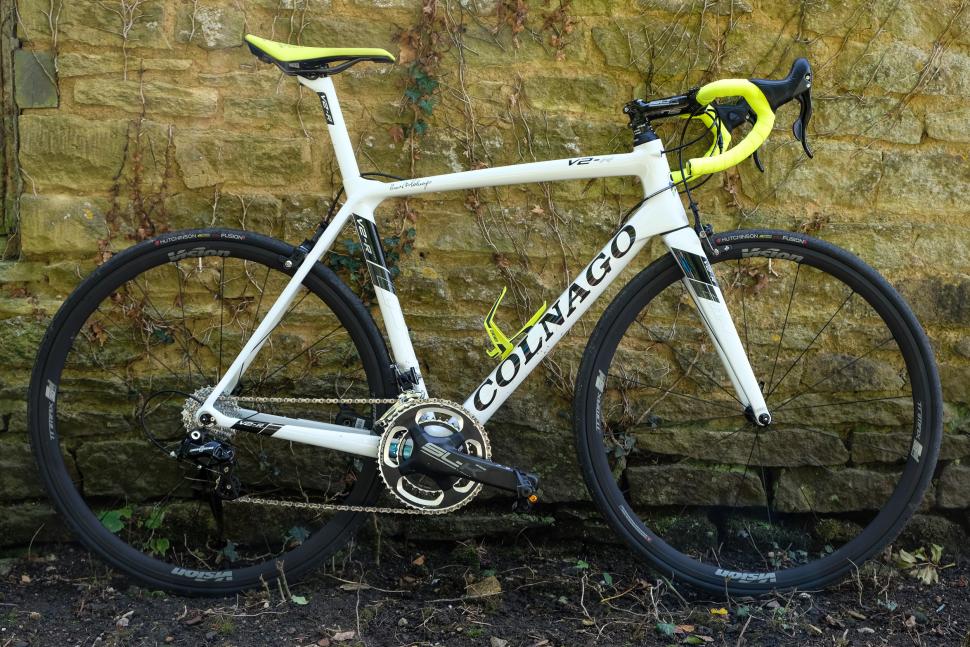 The V2-r frame has not been redesigned, instead, it has been updated. It retains the key features of the original, from the aero shaped tubes to the claimed 835g weight, but it has been stiffened in all the key areas and the rear brake has rather sensibly been shifted from the chainstays to the seat stays. Hooray for easier maintenance and cleaner cable routing.

The seat clamp, previously external, is now internal, located inside the top tube providing easy access. While still internally routed, the gear cables now enter a central port at the top of the down tube, rather than the side of the head tube as before and it’s compatible with the various different groupsets on the market right now.  This choice of routing port on the downtube is interesting because we’re seeing a lot of new bike brands taking the same approach. Colnago has kept the direct mount brakes of the original bike, but instead of the rear brake being positioned under the chainstays, it has now been moved to the seat stays. My one big gripe with the V1-r was the lousy rear brake performance, thankfully the change has produced a positive improvement, so good move Colnago. With the cable routing through the top tube, there’s a smoother path for the cable from the brake lever to brake caliper. 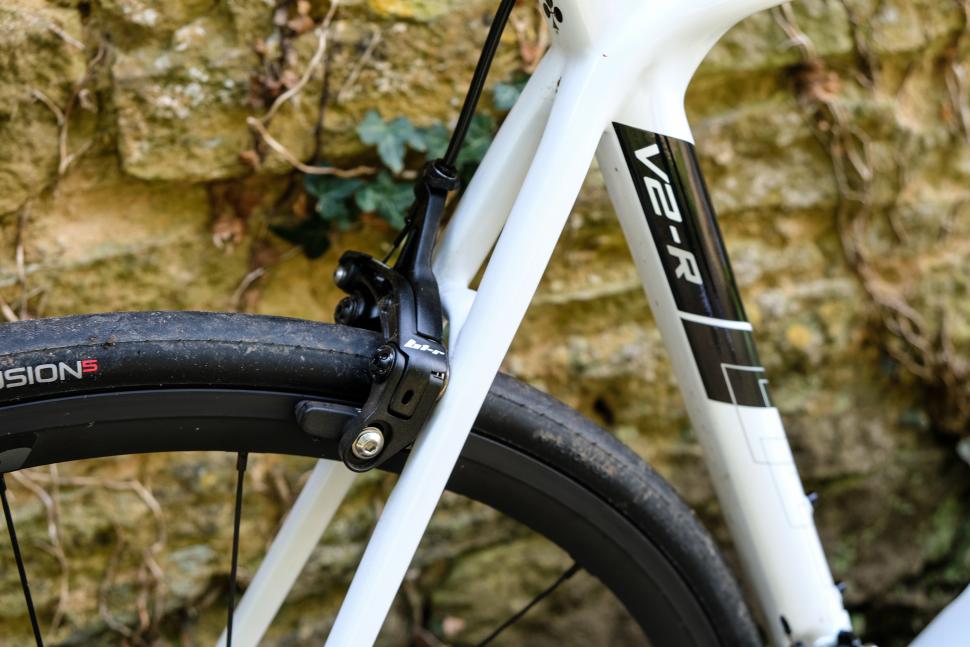 We're so used to every new bike being lighter than what it replaces, but Colnago hasn't shaved any weight on the frame. Instead, it has focused on revising the carbon fibre layup to improve the stiffness-to-weight ratio. It still weighs the same (claimed) 835g but the bottom bracket is 13% stiffer and the head tube is up 4%. Could I feel that increase in stiffness during my short test ride? No, to be honest; I would need to ride the old bike alongside the new one to really identify that difference.

But what was clear from my brief ride on the V2-r is that it’s a very responsive and direct handling bike. Slinging it through fast corners and attacking crests, the V2-r displays a level of agility that is on a par with other bikes in this category, such as the Specialized Tarmac or Trek Emonda (though it’s worth adding that it’s heavier than both of those frames). It’s engagingly rapid, just as you’d hope of a bike designed for racing. The V2-r is also stiff and direct, the steering precise and nicely balanced. It’s surefooted on tricky descents, the improved braking provides better control in such situations. There’s just enough feedback from the road surface to provide a good level of engagement, but it smooths out the roughest road surfaces very well.

The V2-r is an interesting proposition. Since the original V1-r was launched, Colnago has added the Concept, a full aero road bike, to its range. It’s arguably the bike to pick if you’re all about going as fast as possible and would go on a shortlist alongside the Trek Madone, Bianchi Oltre XR4 or Specialized Venge. But the V2-r has the title of the company’s lightest bike, so would be a natural pick if you want a climbing bike. It was certainly no slouch on the steeper climbs I rode it up, and the balance of weight and stiffness provides great reactions when attacking twisting roads and fast descents. Add in impressive smoothness, and the V2-r is a comfortable bike as well, though longer rides will certainly be needed to thoroughly assess that aspect of its performance.

To sum up, based on my short ride the V2-r is a fun, exciting and snappy handling bike that would make it an ideal race bike or high-performance bike for the cyclist that still wants all-round capability. 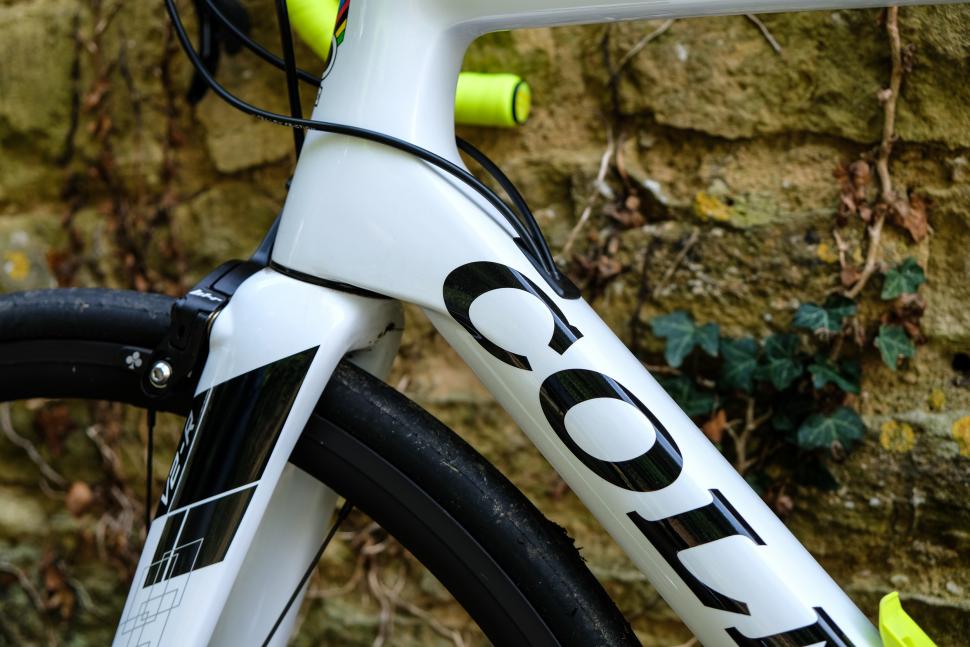 Colnago’s UK distributor Windwave only supplies framesets and the V2-r is priced at £2,899.99. If you wanted a fully built bike there are plenty of reputable Colnago dealers around the UK that would be only too willing to build the frame with the components of your choice.