BMC has launched an updated Roadmachine for 2020 with an emphasis on improved versatility and comfort, with space for 33mm tyres, a lighter and stiffer frame and mounts for a top tube bag.

The Swiss company first launched the Roadmachine in 2016 and it was a pretty modern looking bike by current standards, with disc brakes, wide tyre clearance, sharp frame lines and big on integration. I was impressed with its speed and handling but left cold by its relative lack of comfort compared to rival endurance bikes. 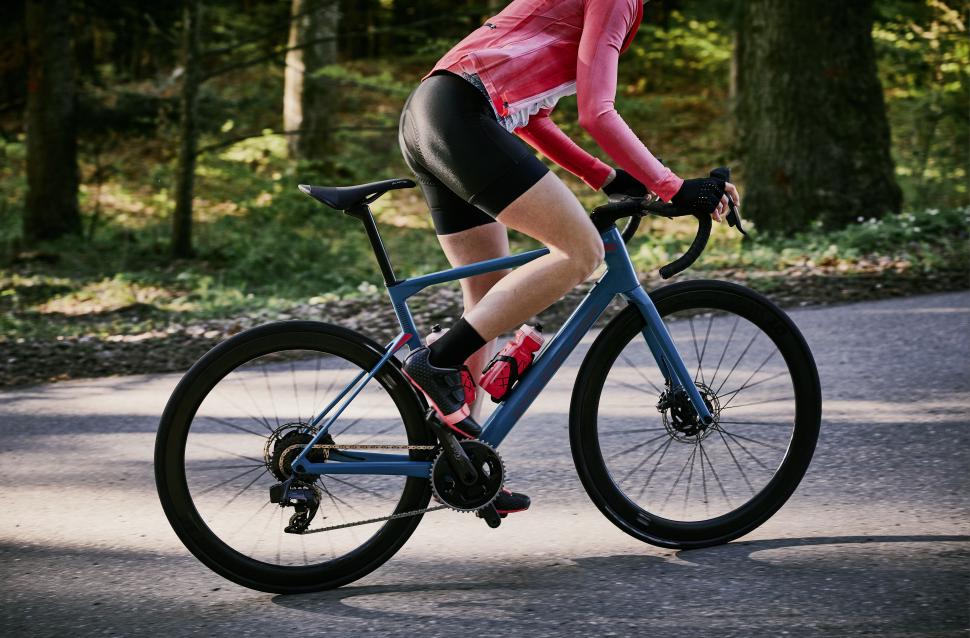 “Road cyclists are riding further, longer, and to higher elevations than ever before,” explains Mart Otten, Senior Product Manager Road at BMC Switzerland. “And, many endurance riders are traveling great distances to different regions and countries to participate in epic-size events which entail all-day adventures. At the same time, those events get more extreme by navigating varying road styles and conditions, longer distances and often more climbing. To meet those demands, we wanted to create an endurance bike that is not only good for riding all types of road surfaces, from smooth tarmac to rougher roads or cobbles, but also one that also shines when roads point uphill.”

At first glance, you’d be forgiven for not being able to tell the new bike apart from the old one. It looks almost identical.  Under the skin, however, there are many changes, as I'll detail below. 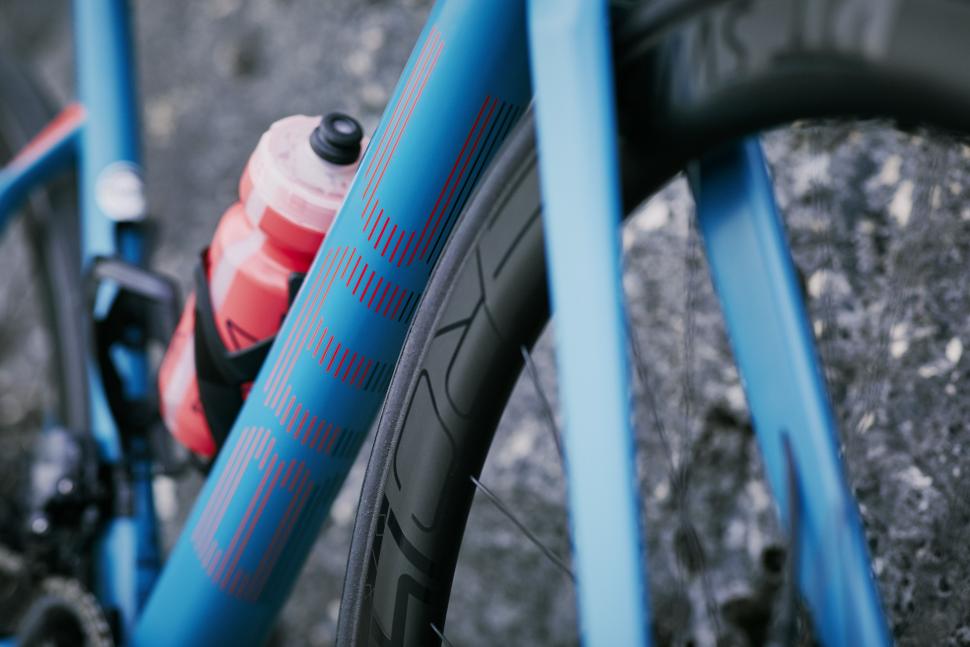 The carbon fibre frame has been revised with 20% more stiffness in the front-end and 5% more at the bottom bracket. Comfort has been boosted by a claimed 25% thanks to new slimmer seatstays that join the seat tube lower down and a revised D-shaped seatpost with a new internal seat clamp. It’s lighter too, with a 25g saving bringing a size 54cm frame down to a claimed 895g. 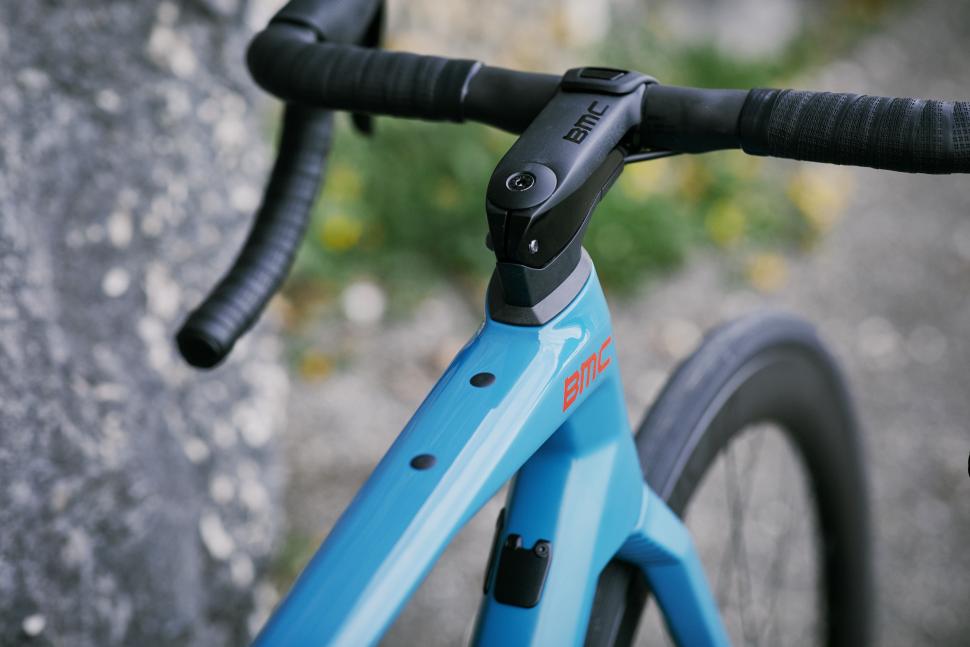 Demand for wide tyres continues to grow and the new Roadmachine now accepts up to 33mm tyres (30mm on the old bike) which should provide more scope for fitting the tyres of your choice and even opening up some light off-road action.

While we’re talking off-road, the new Roadmachine now has a top tube mount for attaching a bag. Popular with gravel and bikepacking cyclists, small bags fitted to the top tube are ideal for easily accessed items like food or cameras. There market isn't exactly awash with compatible bags though, most bikepackers use top tube bags that attach with velcro straps. 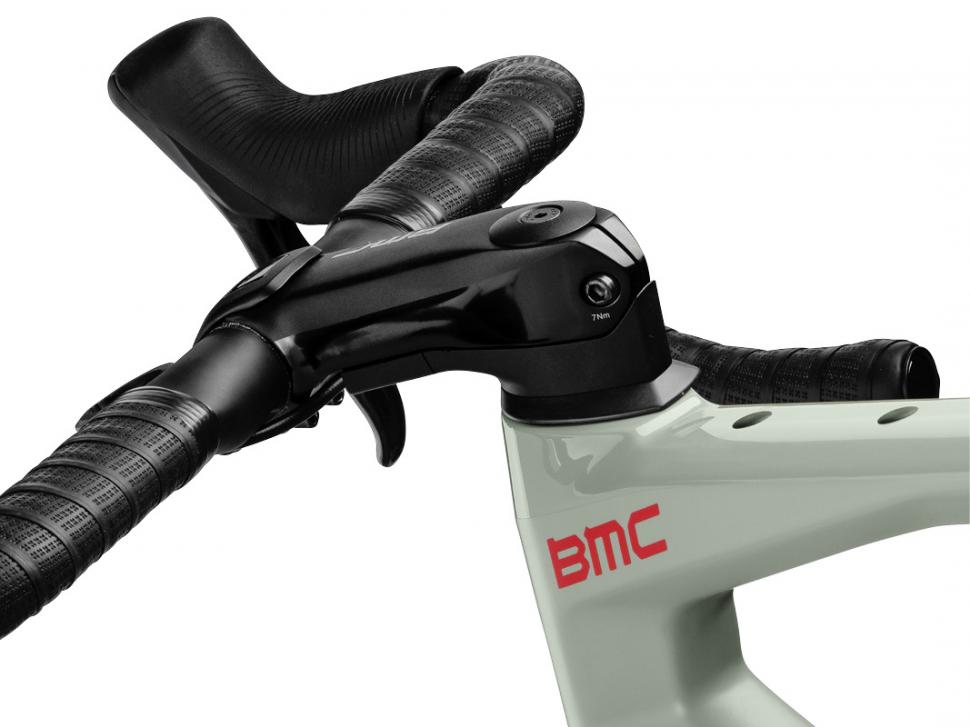 A cleanly integrated handlebar and stem (Integrated Cockpit System) was a highlight of the original Roadmachine, with all cables and brake hoses routed inside. For the new bike, BMC has increased the choice of stem and handlebar options for a wider range of fit adjustments and bikes are supplied with a low and tall headset top cap to provide more setup options out of the box.

Mechanical groupset shod bikes will still see the cables routed outside of the ICS stem, entering the frame at the downtube port. 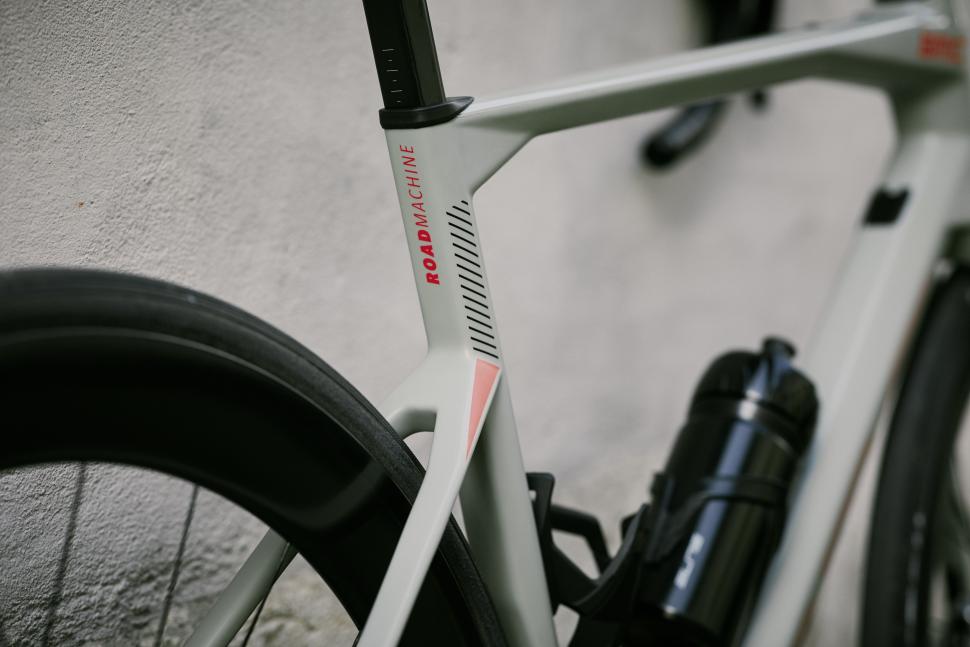 Geometry on the Roadmachine definitely set it apart from many other endurance bikes, with a racier aggressive stance that is closer to some race bikes. For 2020 the company has lightly tweaked the geometry creating a smoother progression through the six sizes from 47 to 61cm. A size 56cm now has a taller stack and a shorter reach.

All other key details carry over from the previous model. There are flat mount disc brakes, an integrated chain guard, internal seat clamp, 12mm thru-axles and a PF86 bottom bracket. 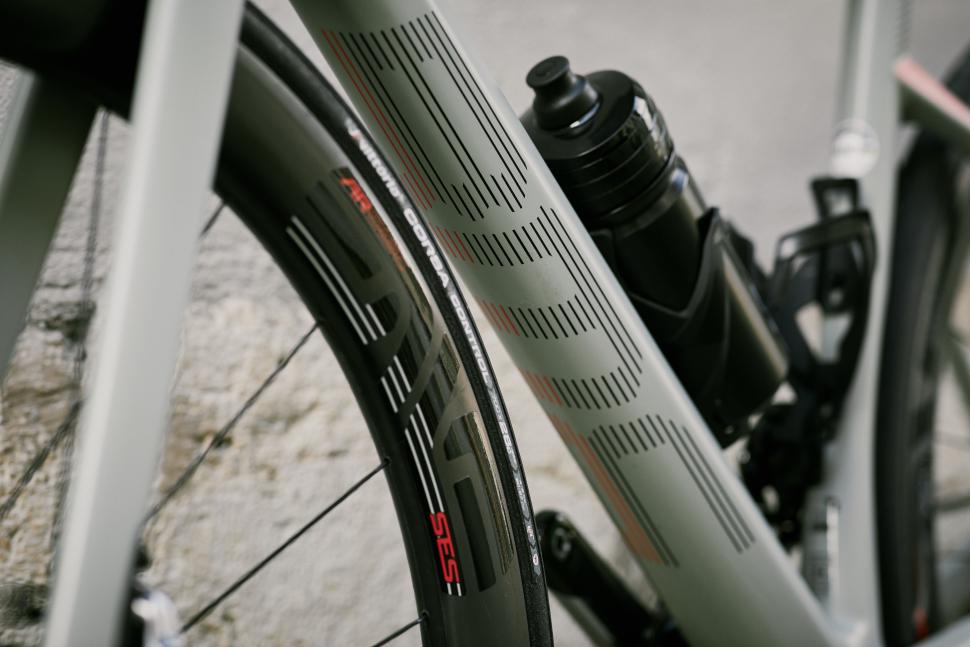 Unfortunately, for British readers of this website, the new Roadmachine no longer has mudguard mounts. Instead, they have been replaced by a new seatpost mounted AssSaver-style mudguard called DFender with bolts into the saddle clamp. 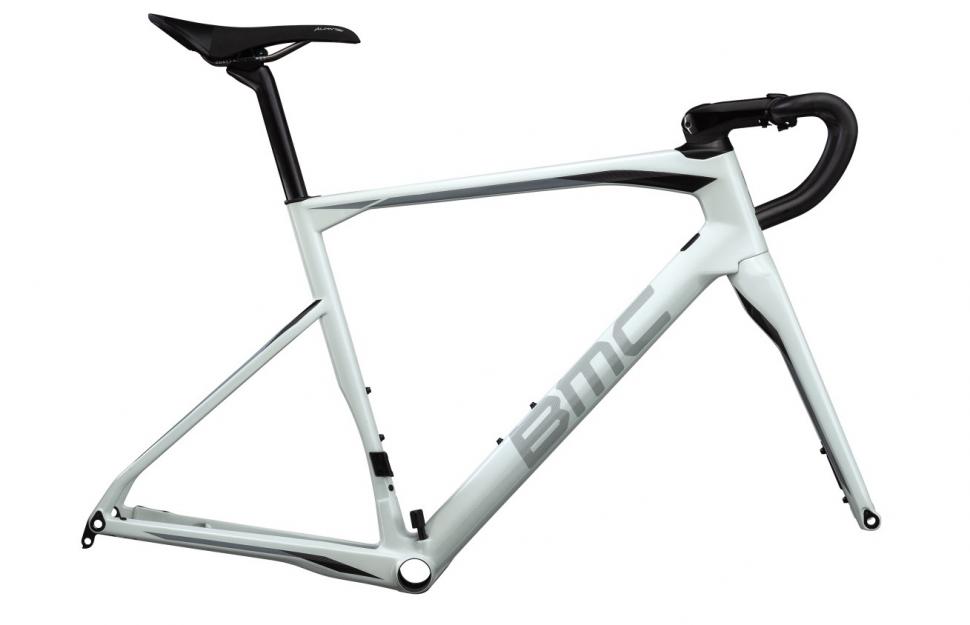 The range will consist entirely of carbon bikes, no aluminium option is being offered, and spearheaded by the flagship Roadmachine 01 One (Yes, BMC is sticking with its confusing naming convention) pictured at the top of this article with a full SRAM Red eTap AXS groupset and Enve SES AR 4.5 wheels costing £10,999. 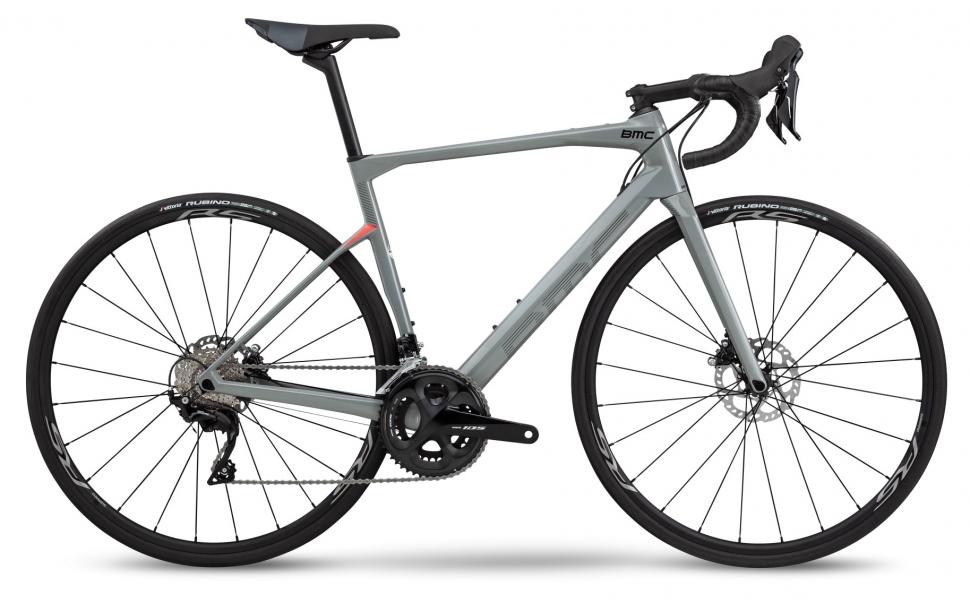 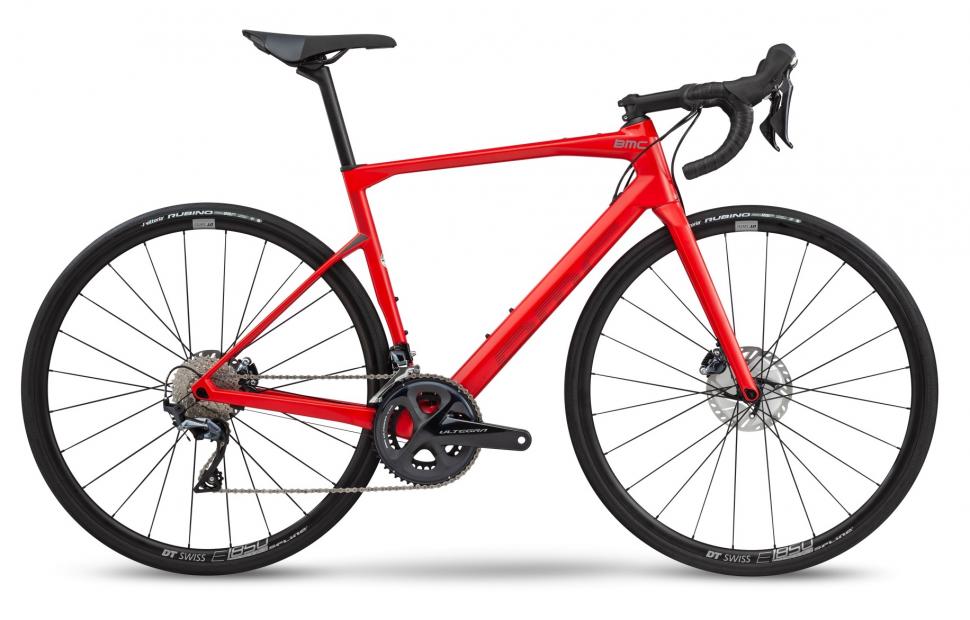 The entry-level Roadmachine 02 Three costs £2,999 with a Shimano 105 groupset. You can also buy a Roadmachine 01 frameset with handlebar, stem and seatpost for £3,999. 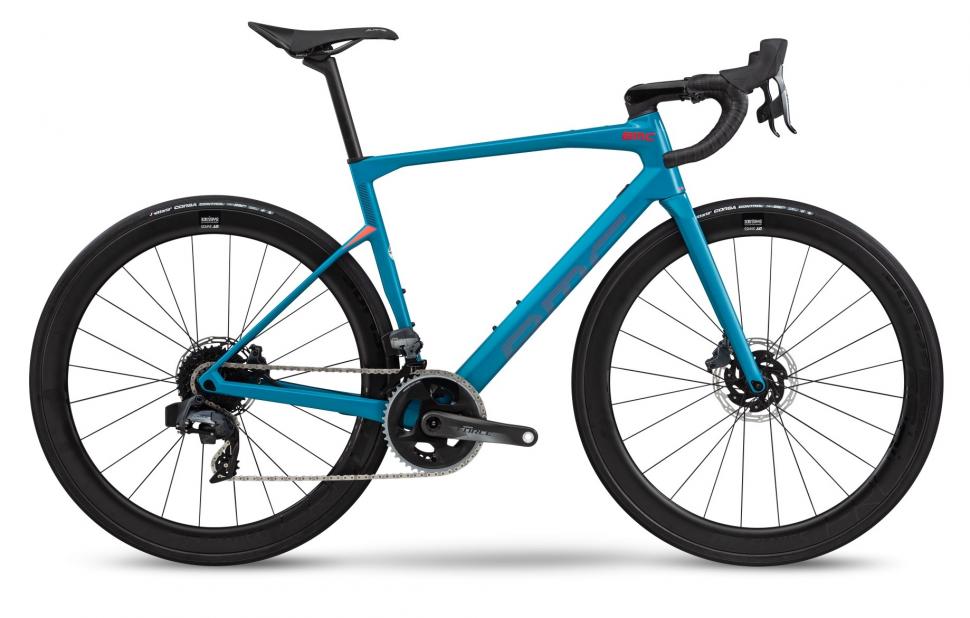