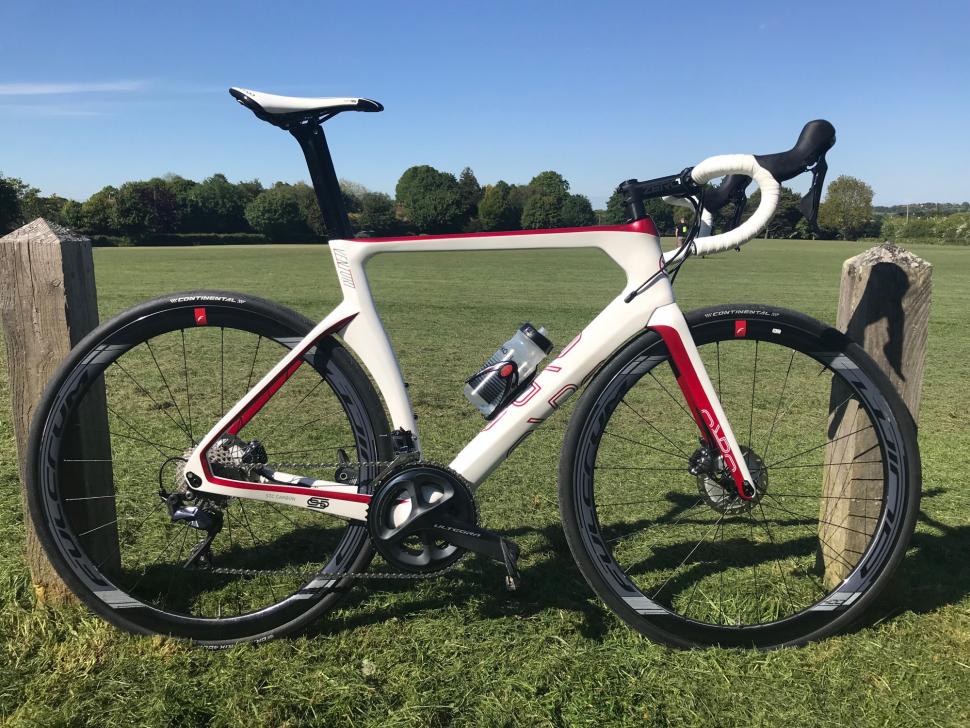 The Orro Venturi disc brake aero road bike is finally available, and we can tell you that it rides smoothly, offers loads of frame stiffness, and packs in plenty of value.

Okay, first a little background because, although we've told you about the Venturi several times before, it has been over an extended period and we're not expecting you to have taken notes. We'll go back to the start.

Sussex-based Orro revealed the Venturi at the start of last year after an 18 month development period – and Orro does design its own bikes, it doesn't use open moulds. The Venturi is an aero road bike that's disc brake-only; there's no rim brake version. The same is true of the latest version of the Specialized Venge, for example, BMC's Timemachine and the Cannondale SystemSix, among others. One other important feature is that the Venturi is optimised for 28mm-wide tyres rather than 25s. Orro says that it made this decision right at the start of the process, its reasoning being that wider tyres allow you to run lower pressures, improve grip and reduce rolling resistance. Orro also says that although wider tyres present a larger frontal area, they make for a smoother transition between the frame and the wheels, improving the airflow and reducing drag – obviously a key consideration in any aero bike. 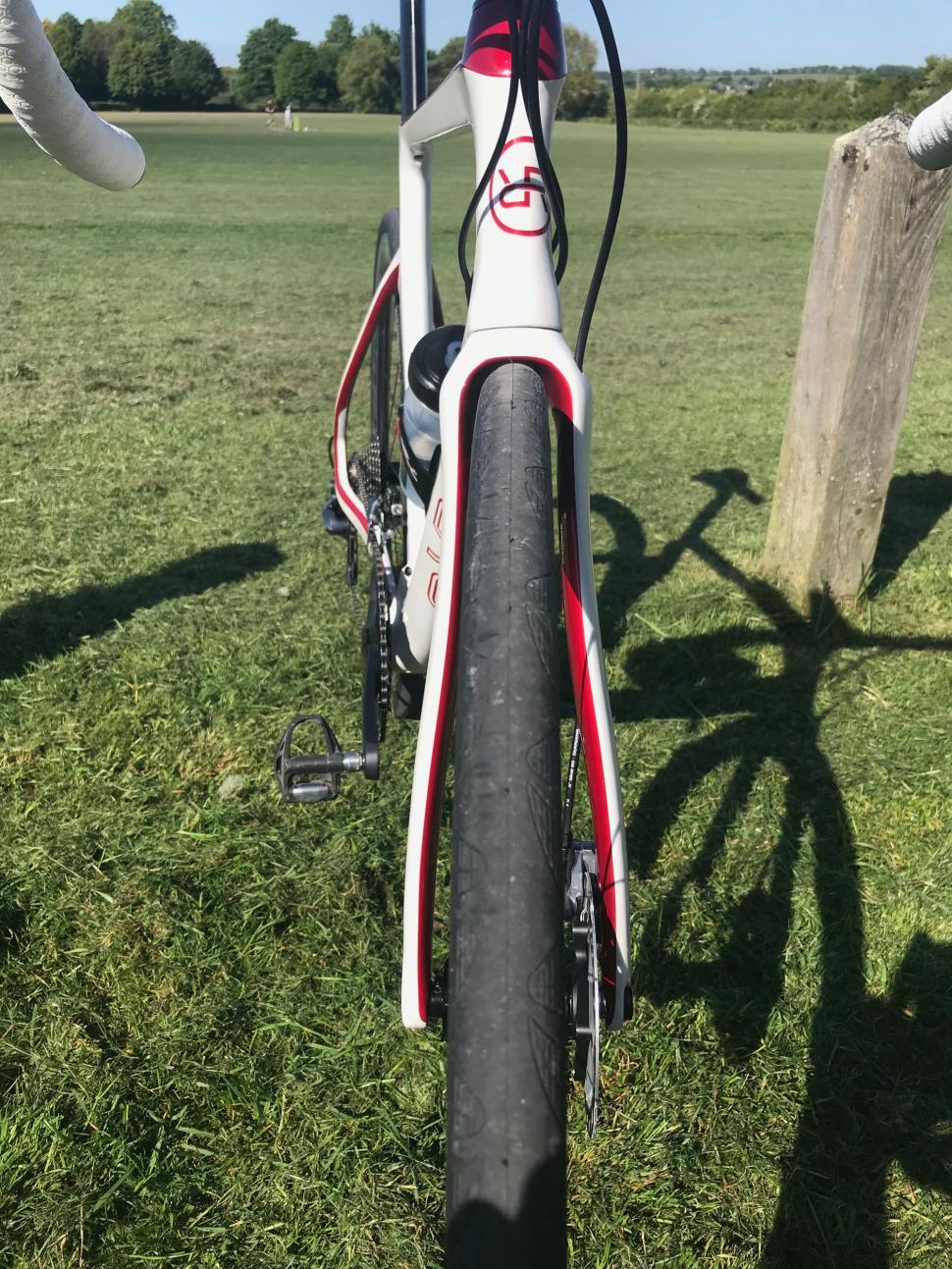 Although 25mm tyres are still the most popular option on road bikes, we’re hearing of more and more bike and wheel manufacturers moving to 28mm. If you really want to fit narrower tyres to a Venturi for any reason there's nothing to stop you, but Orro specs 28mm Continental Grand Sport Races. The frame features spread tow carbon from UK carbon composite specialist Sigmatex. 'Spread tow' means that the carbon fibre is arranged in flat, wide tapes; think of it as ribbons that are woven together. It's a technology that Orro already uses to great effect on its Gold STC road bike.

What's the point of spread tow?

“The sigmaST range of spread tow fabrics are very thin, are ultra lightweight, have near zero crimp and fewer interlacing points,” says Sigmatex. “As well as being aesthetically pleasing, this technology has improved mechanical performance at a reduced thickness and cost when compared to standard 2D fabrics using 1K fibres.”

The spread tow construction is said to reduce weight and increase stiffness. Plus, the fact that the carbon comes from Sigmatex, based in Runcorn, means that Orro can trace it through every stage of the bike’s production. Spread tow also has a distinctive chessboard appearance. If you go for the black version of the frame you'll be able to see it clearly, whereas on the white/red version it's visible only where Orro has left little windows in the paintwork.

We visited Sigmatex with Orro for our 2019 range overview. Check out our video.

Once the mould was designed, Orro tried out frames in three carbon-fibre layups during the development process, each of them built with exactly the same components apart from differently coloured water bottle cages in order to tell them apart. These were ridden by the Orro team over a period of weeks, and everyone apparently agreed on the model that should go into full production.

This was all sorted well over a year ago but Orro had a supply issue with the Venturi and final versions of the frameset have only just arrived in the country and been built up at the company's HQ just outside Ditchling. 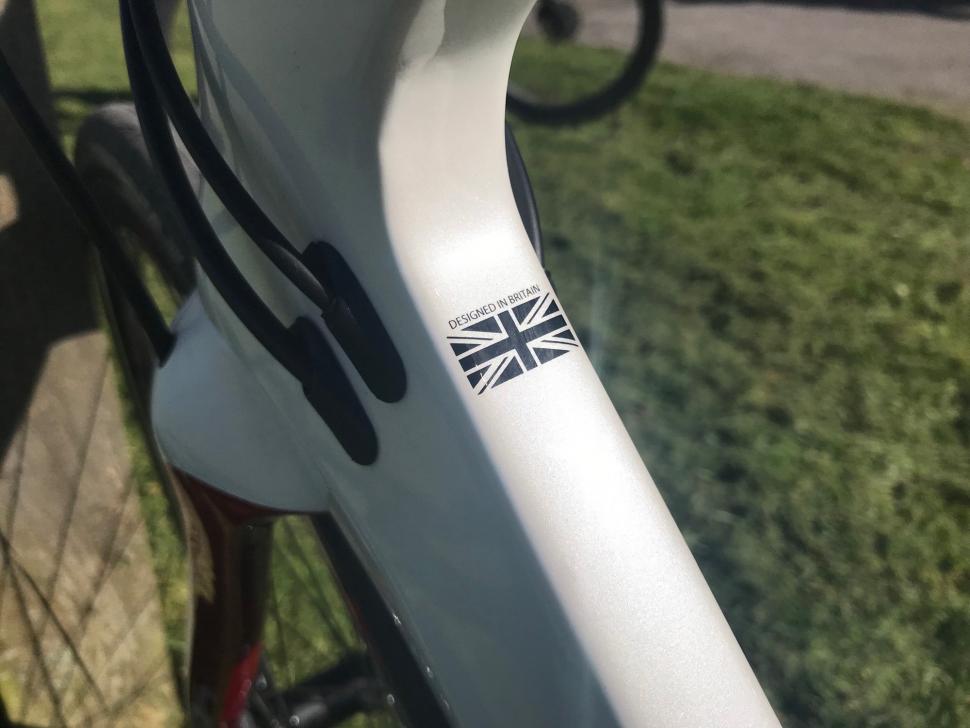 That's where I headed last week for a ride on the Venturi. I rode up Ditchling Beacon (my first time up there; a really cool climb), down to Brighton, up Devil's Dyke and back home through the lanes. Some ups, some downs, and some flat bits. That's not enough time on the bike to form the basis of a complete review but it's long enough to get some early impressions, and they're positive.

Comfort might seem an odd place to start when talking about an aero road bike but that's exactly what I'm going to lead with because, well, a lot of aero road bikes really suffer when it comes to ride quality. Their slim but deep-section tubes might slip through the air with the minimum of turbulence but comfort is low on the list of priorities. Let's be honest, some are downright harsh.

It's difficult to tell on one ride whether the Venturi's frame is any different from the majority of other aero road bikes in this respect, but the fact that it's designed to be used with 28mm makes a big difference. 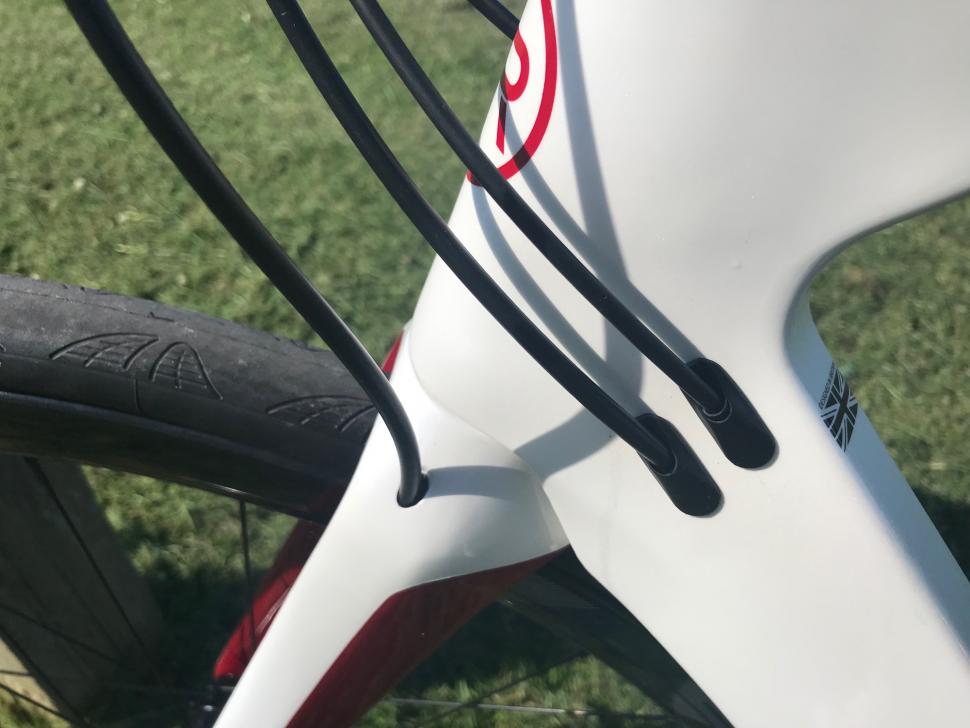 If you feel you have to get rattled around in the saddle to feel fast then by all means stick with skinny tyres, but the more I ride them the more I like 28s (and I'm someone who would probably have used 10mm tyres if I could have got them back in ye olden dayes, and cut a groove in the tarmac in the process). Yes, they're marginally heavier than 25s and, as mentioned above, they increase your frontal area a touch, but the difference they make to the ride quality is huge.

I can't tell you how the Venturi feels after five hours, but judging by the time I did spend in the saddle I'm pretty confident that you won't have any worries there. Some aero bikes are fast but harsh; the Venturi is fast and comfy. I know which I prefer. As for the ride position, I was on the large sized Venturi with a 558mm effective top tube and a 164mm head tube. The seat angle on this model is 73.5° while the head angle is slightly slacker than you might expect at 72.3°. The stack is 562mm and the reach is 392mm, giving a stack/reach of 1.43 – nothing too radical there. That's a race geometry, as you'd expect, but it isn't the most aggressive you'll ever see.

I could have done with a longer top tube, truth be told, but I'm actually between Venturi sizes; the XL would have been a bit too rangy. With a 120mm stem fitted I had a ride position that felt efficient. 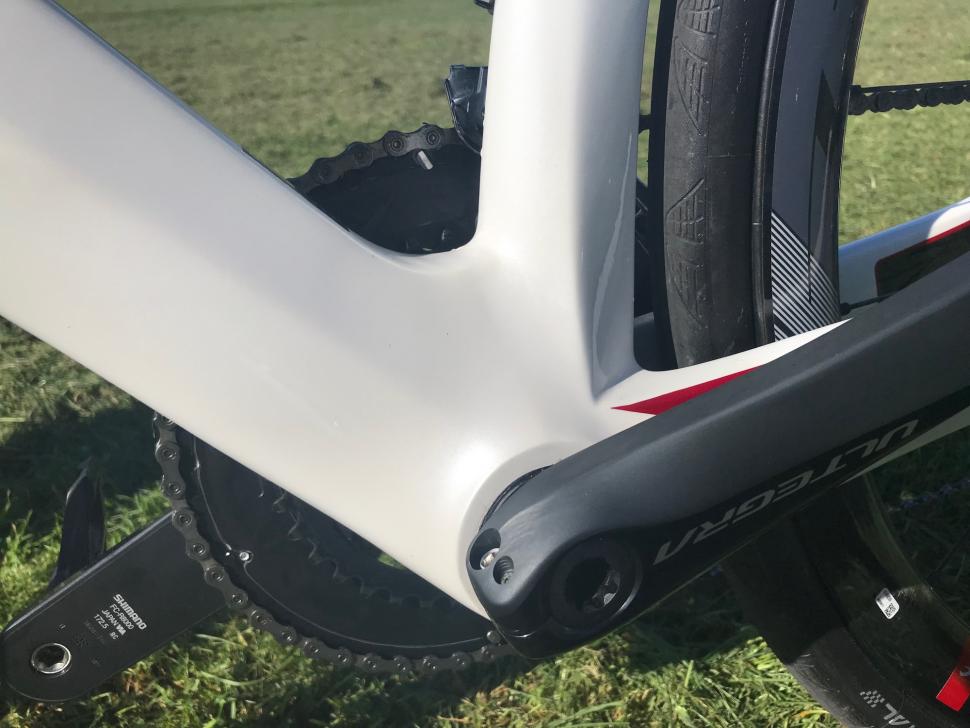 Another key feature you notice when riding the Venturi is the frame stiffness. Again, some aero road bikes in the past have fallen short in this respect but slam the chain in the big ring, jump hard on the pedals and there's very little noticeable flex here. Rather, the Venturi is highly responsive, obediently turning everything you throw at it into forward motion.

One final thing to mention is the stability. There are certainly bikes out there that are keener to hold a line but the Venturi is a long way from twitchy. Manoeuvrable, yes, twitchy, no. It's not one of those bikes that requires constant attention to stay straight.

In the absence of a wind tunnel, I can't tell you about the Venturi's aerodynamic performance, although many of the features we've come to expect of aero road bikes are present and correct. The frame tubes are narrow and deep, for example, as are the fork legs, and the fork crown is integrated into the head tube/ down tube junction. That down tube is dropped with a cutaway section to accommodate the front wheel.

The seatstays are dropped too, and the seat tube is cutaway around the leading edge of the rear wheel. The seatpost is shaped for aerodynamics as well, and it's held in place by a hidden wedge-type system, the bolt recessed into the underside of the top tube. 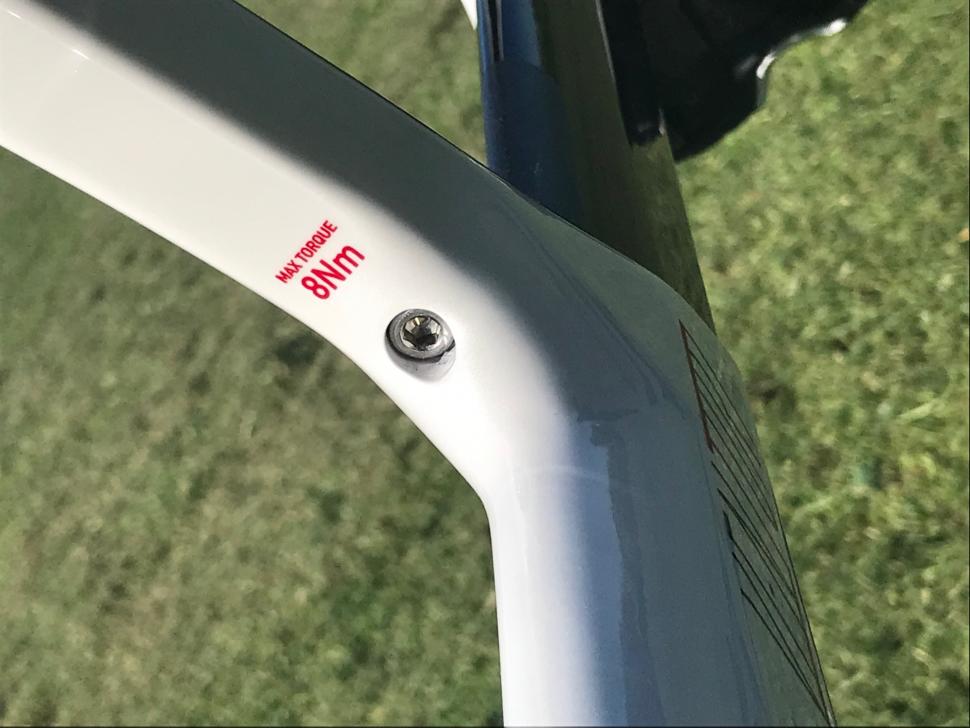 The Venturi is currently available as a frameset – including the seatpost, headset, bottom bracket and switch lever thru-axles (you can remove the lever once they are in place) – for £1,999.99, or in two different builds.

The more expensive version is £3,299.99 and comes with a full Shimano Ultegra Di2 groupset, Ultegra hydraulic disc brakes, Fulcrum Racing 400 DB wheels and Continental Grand Sport Race tyres. The handlebar and stem are from Deda and the saddle is from Prologo. I was on the more affordable version which is exactly the same but for the fact that you get mechanical shifting. This version is £2,599.99 but I did have a cheeky wheel upgrade that takes the price up to £3,499. Rather than the alloy Fulcrum Racing 400s, my bike was fitted with the new carbon Fulcrum Wind 400s. 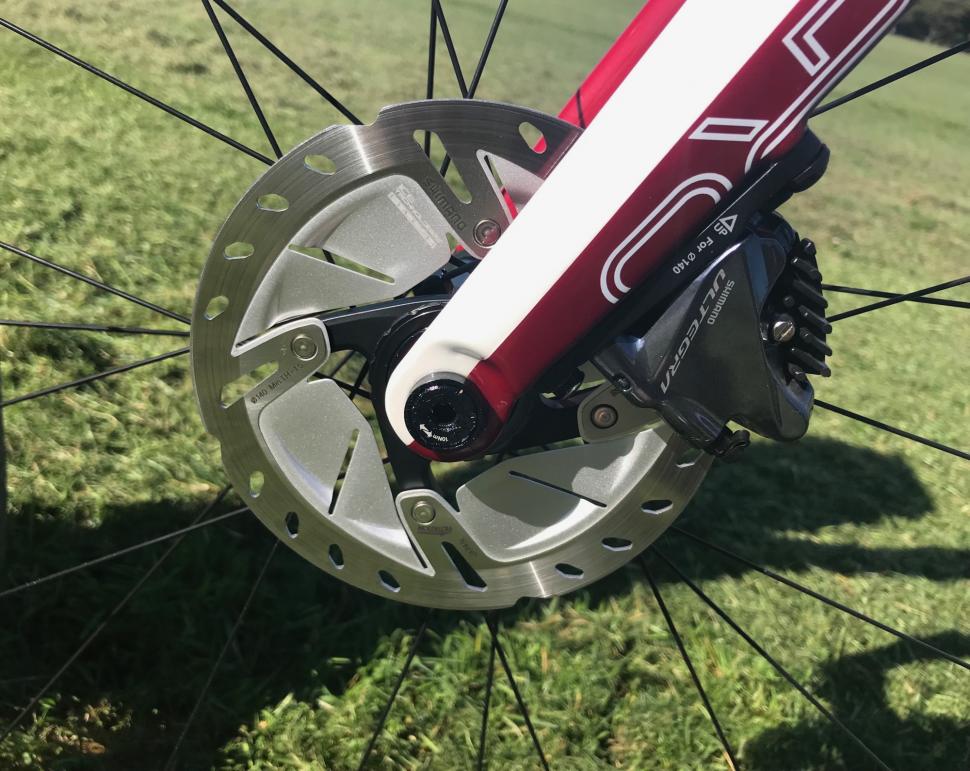 Those are competitive prices. The BMC Teammachine SLR02 Disc One, for instance, is £4,400 with a Shimano Ultegra Di2 build, as is a Bianchi Aria with the same groupset.

Overall, the Orro Venturi offers a good level of stiffness, a very high ride quality and lots of value alongside its aero claims. It might have been a long time coming but it has been worth the wait.

Find out more at www.orrobikes.com