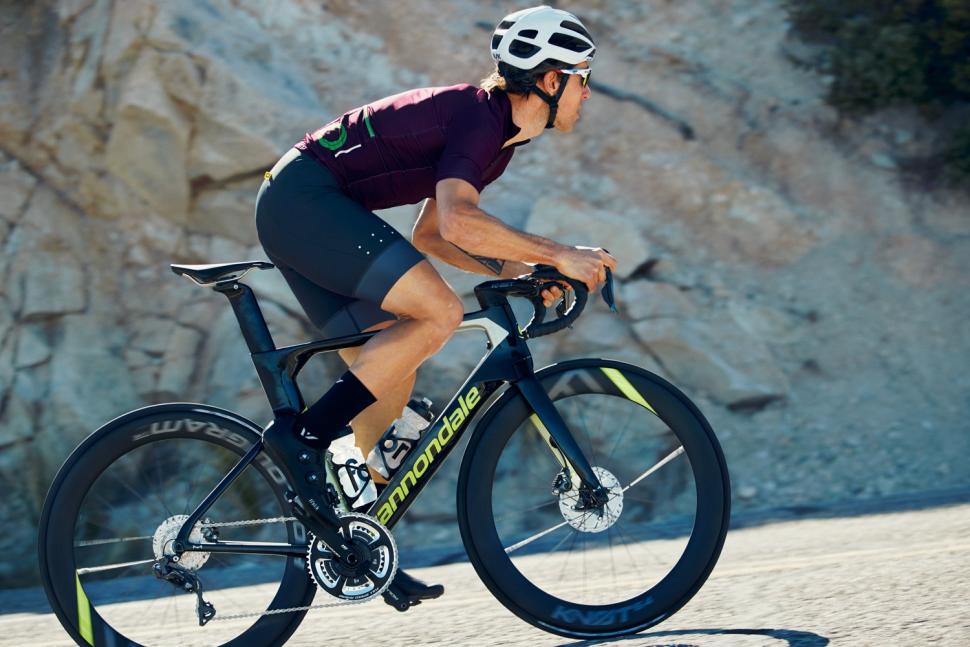 Cannondale has officially revealed the SystemSix which it claims to be the world’s fastest UCI-legal road bike. The US brand says that the new platform, available only with disc brakes, isn’t simply an aero road bike, it’s designed as “a complete speed system”.

Check out our first ride impressions of the Cannondale SystemSix.

What took you so long? That’s the question that many people will be asking. For a few years most major brands have gone for a dual-pronged attack when it comes to high-end road bikes: a lightweight option and an aero option. Cannondale, on the other hand, has had the SuperSix Evo – which is lightweight and boasts aero features – fronting it out alone. That all changes with the introduction of the SystemSix (which carries a name resurrected from the past). There’s a lot to explain here so strap yourself in for some detail.

Is all the "fastest bike in the world" talk hyperbole/marketing BS? Well, a lot of new bikes come along with similar claims so check out Cannondale's claims (below) and see if you're convinced. You can pretty much guarantee that there will be another "fastest bike in the world" along shortly especially considering that this is week in which the Tour de France starts and brands love to use the race as a launchpad for their new products.

Cannondale argues that the SystemSix, which has been ridden by members of Team EF Education First-Drapac p/b Cannondale for a few months now, isn’t an aero bike because it’s more than that; the label is limiting. There’s certainly a massive focus on aero efficiency here, though. 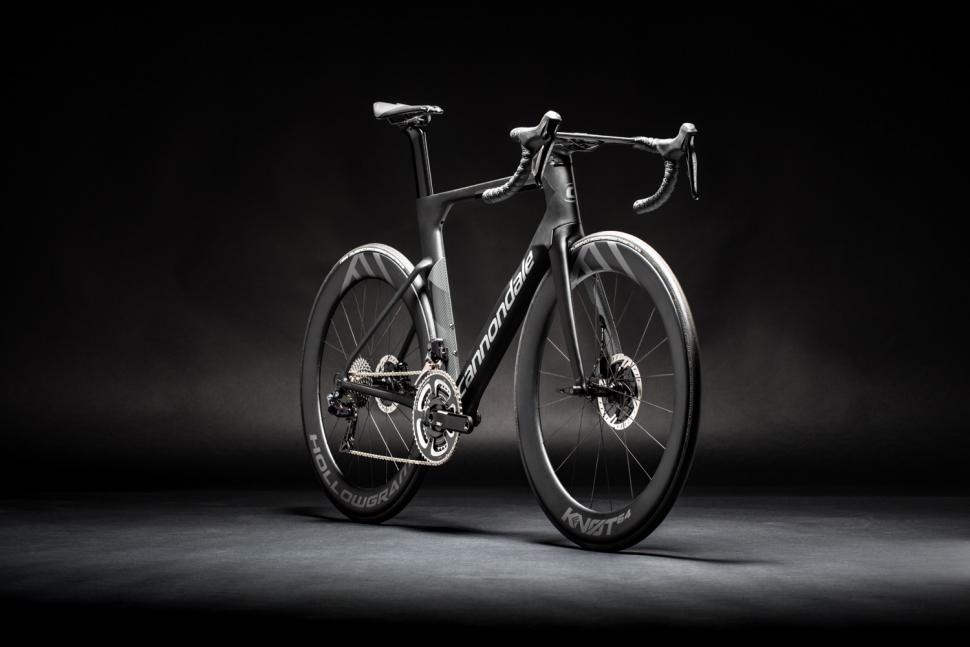 “The SystemSix is built on a six-part foundation – frame, fork, seatpost, bar, stem and wheels that all work together as a system,” says Cannondale. 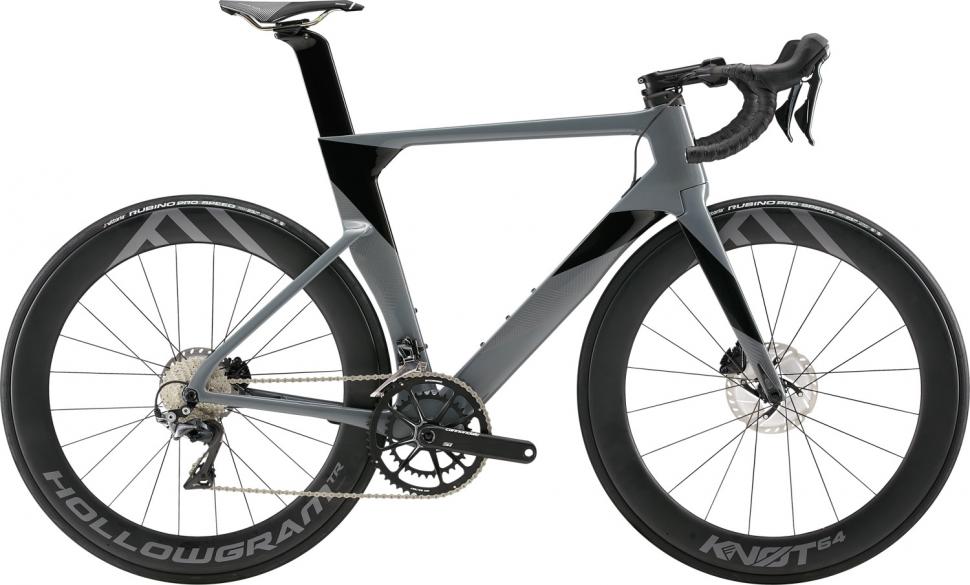 Cannondale didn’t have the necessary aero expertise in-house so it brought in aerodynamicist Nathan Barry as a design engineer, not surprisingly using CFD (computational fluid dynamics) and wind tunnel testing as development tools for the three-and-a-half year project. “SystemSix is the result of a ground up design where each element is optimised in pursuit of speed,” said Nathan Barry. “Aerodynamic drag is the single greatest resistive force that riders have to overcome so it is important to everyone, not just racers. SystemSix delivers more speed, to more riders, more of the time.”

As you ride faster, drag increases massively. Reduce resistance and you’ll ride faster, obviously. With that in mind, Cannondale has tailored the airfoil profiles of the various parts of the frame “with differing degrees of truncation designed to maintain flow attachment across important yaw angles to minimise drag”.

It has also introduced what it calls a chine at the base of the head tube “to redirect air flow coming up the back of the fork leg, channelling it downstream”. The proprietary fork is airfoil profiled too with an integrated crown. It has asymmetric legs for handling the loads imposed by disc brakes and enough clearance for larger tyres. Some models in the range come with Cannondale’s new Knot64 wheelset which licenses a patent from Hed and is designed to work with wide tyres. The 64mm-deep rims have a whopping 32mm outer width. This means that a tyre labelled 700 x 23 will actually measure more like 26mm across (which is the width for which these wheels are optimised, although the bike will take tyres measuring up to 30mm across). 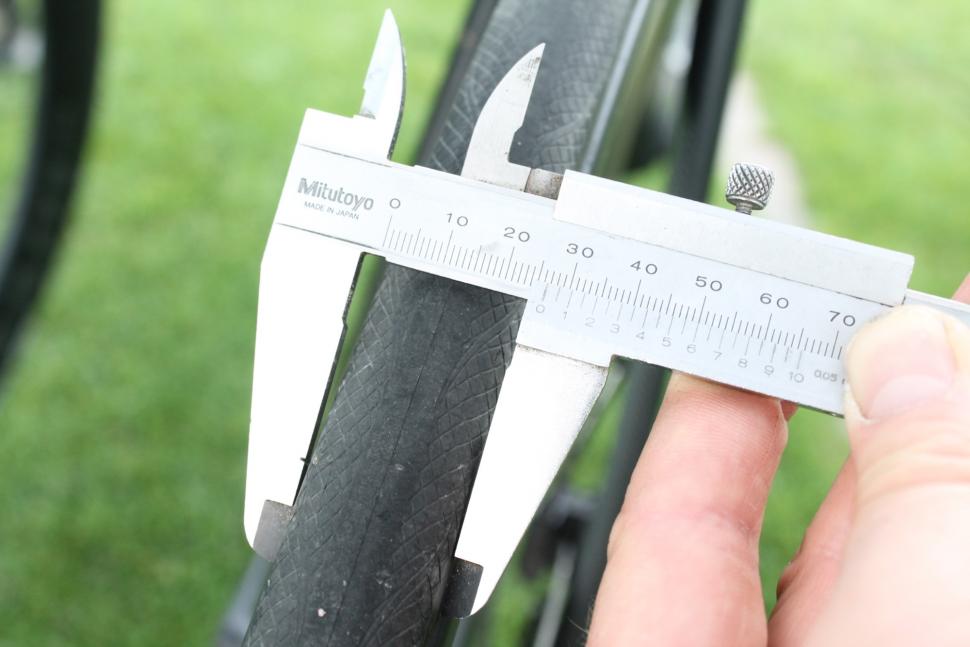 Instead of an ice cream-type profile with the tyre bulging out wider than the rim, this design means that the rim will be the wider component. Cannondale says that this maintains airflow attachment from wider tyres rather than allowing it to disconnect, reducing drag. The wider tyre profile also helps with comfort, rolling resistance and grip. 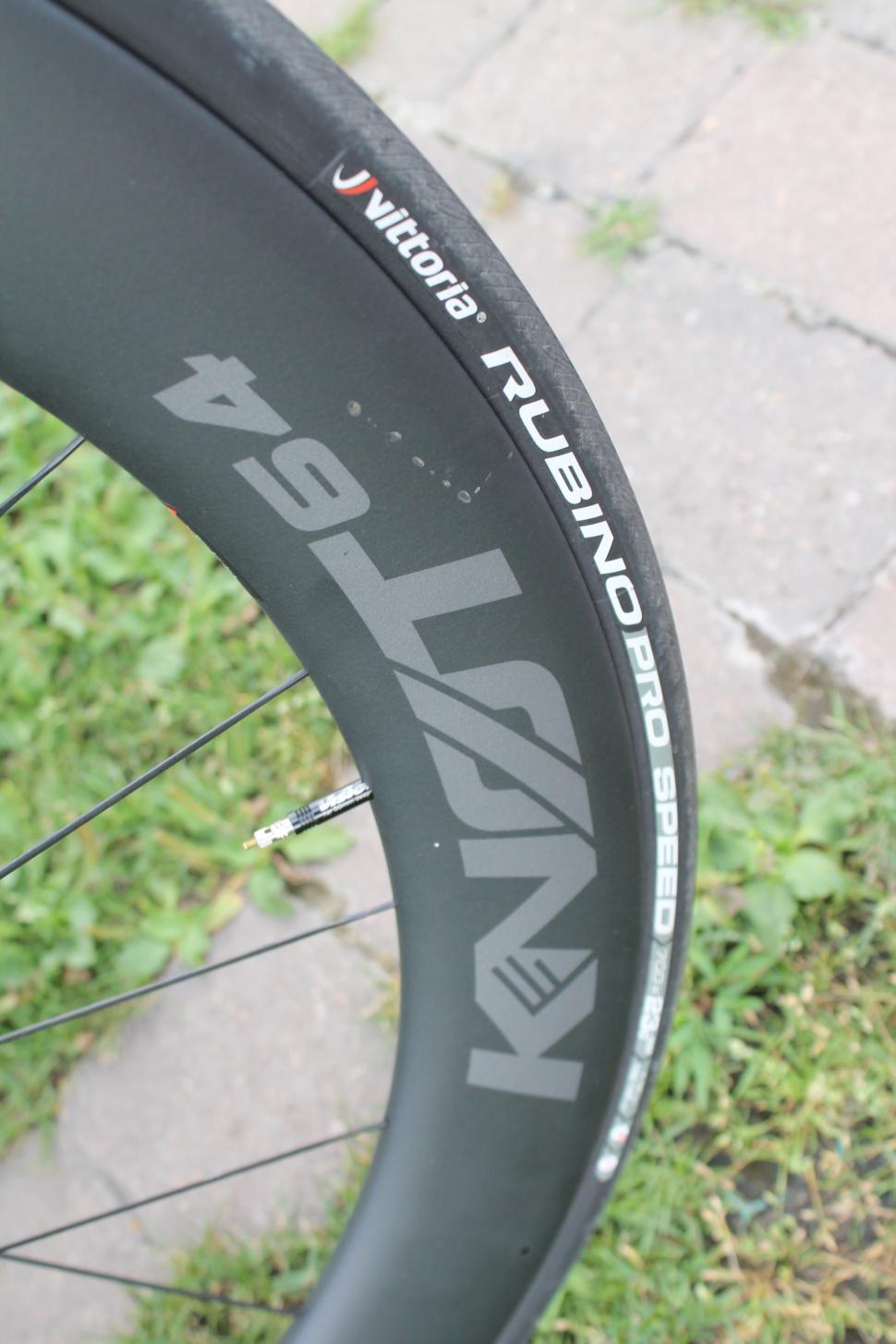 The wheels are held in place using Mavic’s Speed Release system. One dropout is open, the other is threaded; the axle goes in there, you give it five turns to tighten it and away you go. It’s compatible with standard thru-axle wheels. 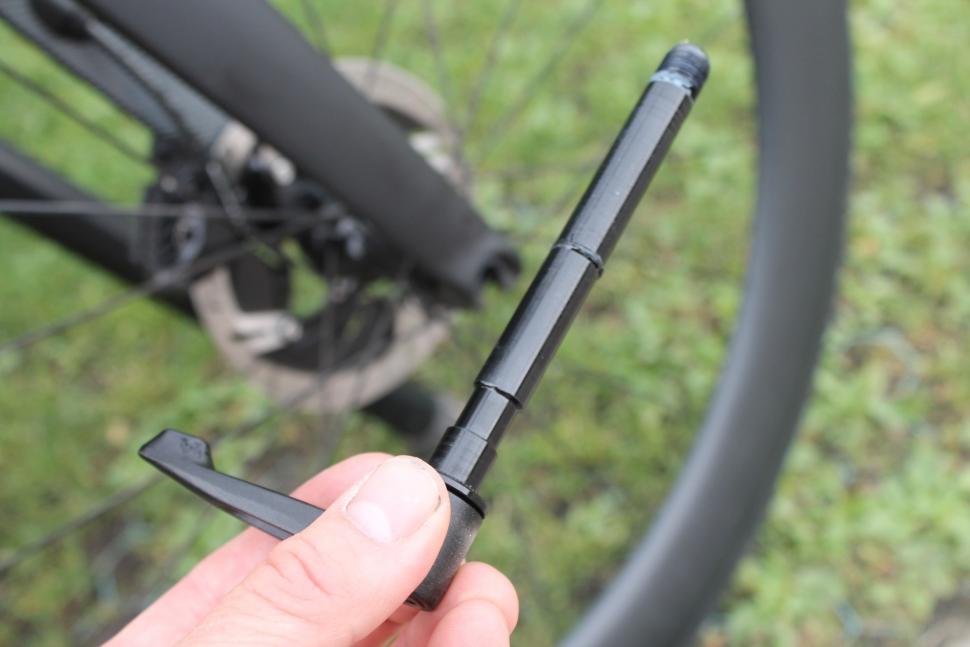 The wheels are tubeless compatible although the Vittoria Rubino Pro Speed tyres fitted to all models aren’t. 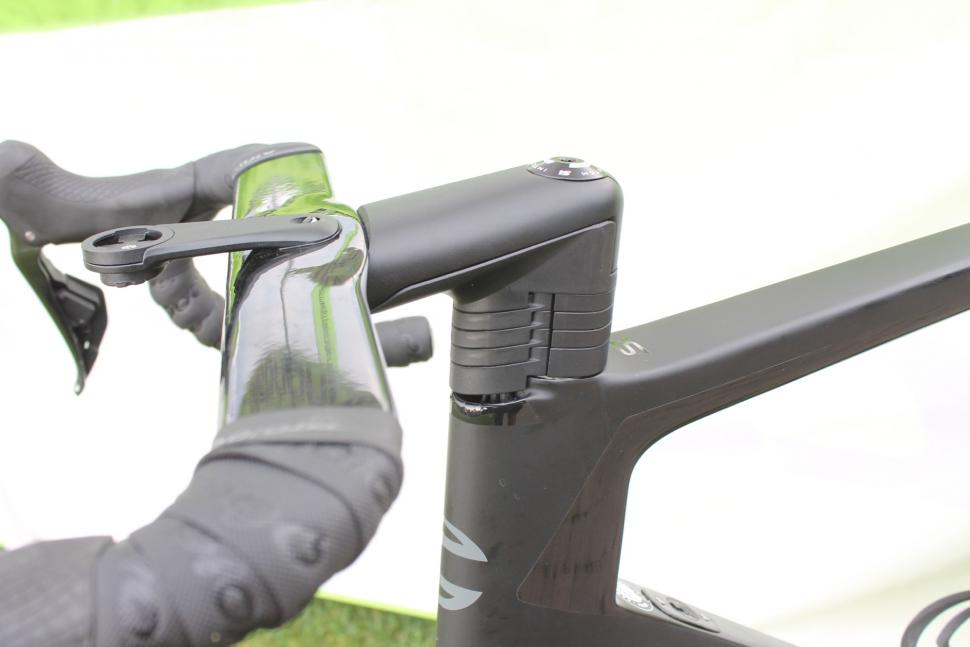 Higher end models feature a Knot SystemBar and stem which, although separate parts, are designed to work together. The bar has truncated airfoil profiled top sections and the cables that run internally. You get 8° of angle adjustment which you wouldn’t get with a one-piece system. 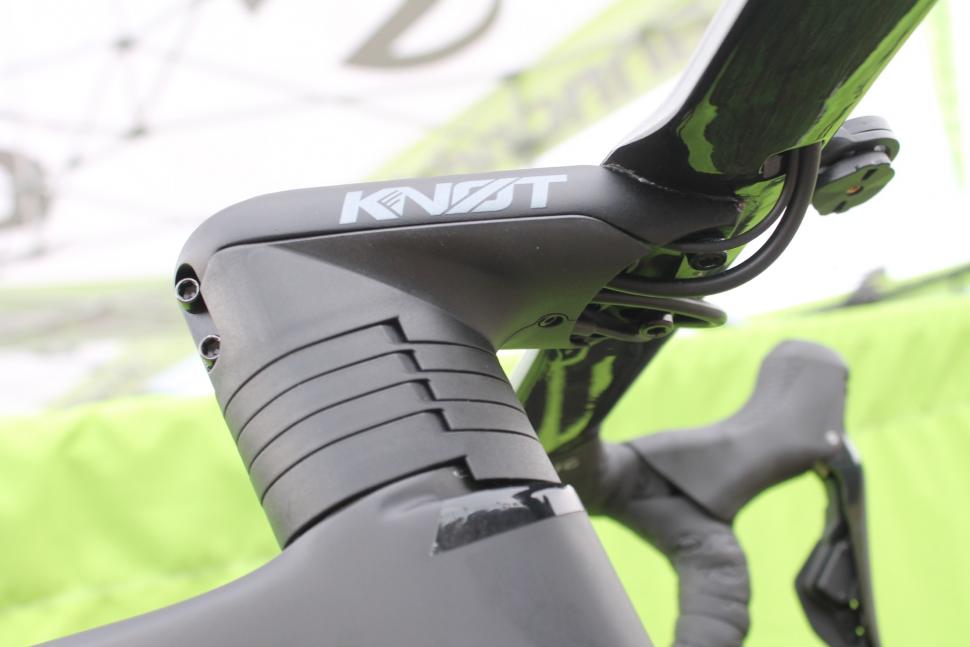 The stem is -17° so it runs parallel with the ground to minimise frontal area. Cables/hoses are hidden inside the stem. That might sound like a mechanic’s nightmare but rather than threading though there’s actually a removable cover that goes over the top of them once you’ve finished any maintenance so it’s a user friendly design. Gated headset spacers allow height adjustment without the need to disconnect brake hoses. The routing goes through a hollow at the front of the head tube.

The proprietary seatpost has a profile that’s designed for aero efficiency too, mimicking that of the seat tube. It’s held in place by a hidden wedge system. 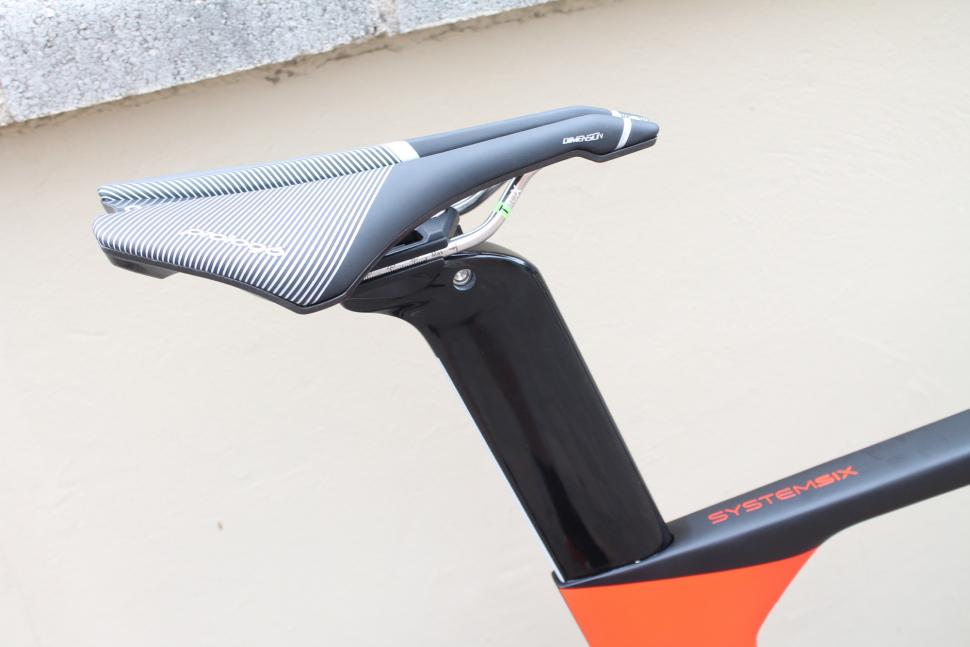 Cannondale claims that the SystemSix produces the least aerodynamic drag of any road bike on the market. Its assertion covers yaw angles from -20°C to 20°C and a speed of 48km/h (30mph). It has developed its own weighted drag system (to take account of the relative importance of various yaw angles) to calculate aerodynamic efficiency that’s based on Nathan Barry’s research as recently presented in the Sports Engineering journal. 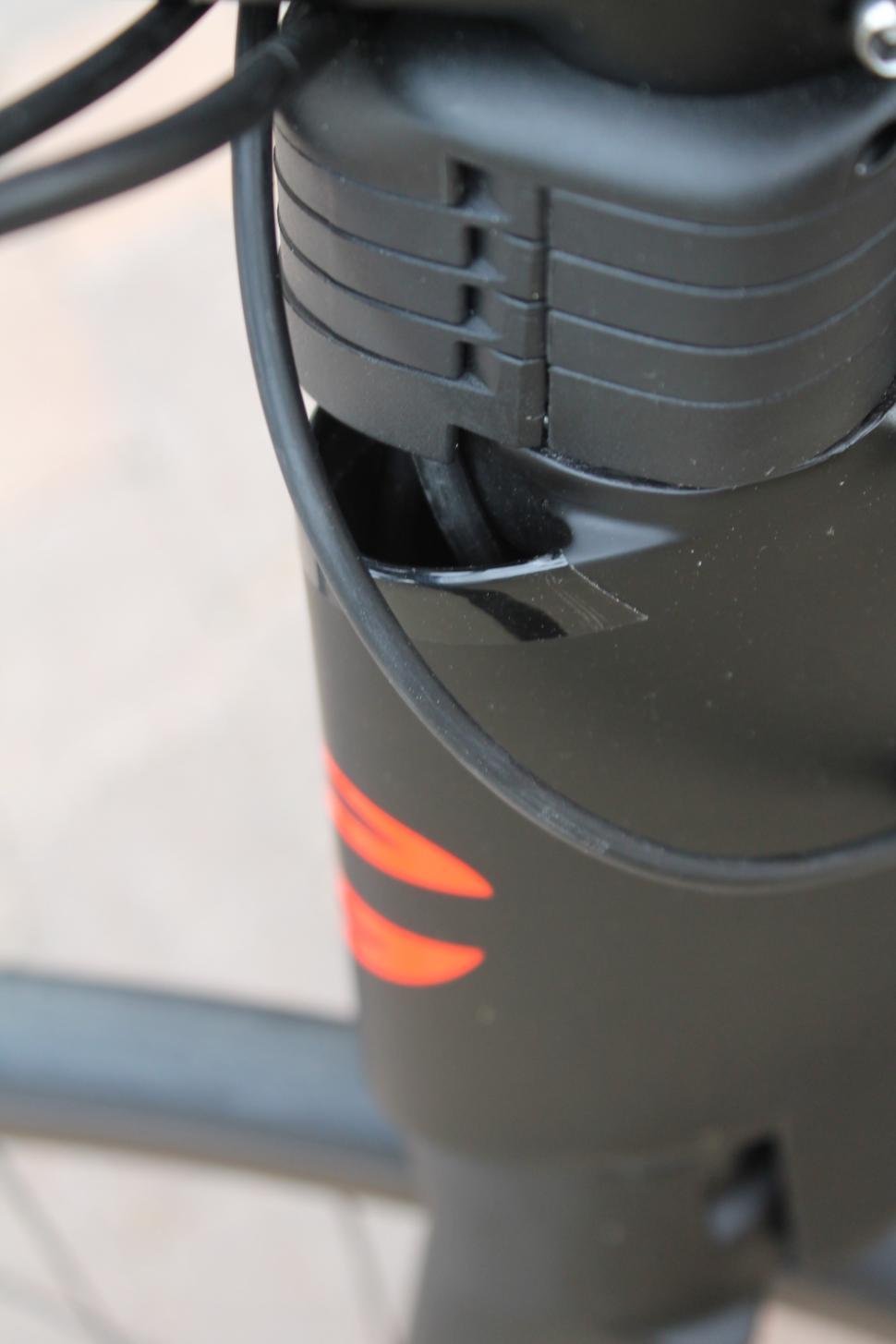 In CFD Cannondale calculated using a rider on the bike although it didn’t test with a rider in the wind tunnel, feeling that this would add too much ‘noise’ to the data. Cannondale reckons that the aerodynamic performance of the SystemSix will benefit you in these ways:

• Riding solo or on the front of a group at 48km/h (30mph), the SystemSix will save you more than 50 watts compared to a lightweight (non-aero) road bike, 13 watts over Specialized’s Venge Vias, 11 watts over the Cervelo S5, and 6 watts over the Trek Madone, its nearest competitor.

• Drafting behind another rider at 48km/h (30mph) saves you 30 watts compared to a lightweight road bike.

• At a speed of 30km/h (18.6mph) on a flat road a traditional road bike requires 140 watts while the SystemSix will save you around 10% power at that speed.

• In a 60km/h sprint over 200m, Cannondale’s notional rider on the SystemSix will save 0.4secs over an identical rider putting out the same power on a SuperSix Evo, finishing 7.2m ahead.

• Pedalling down a 5% gradient at 200 watts will get you to 60.6km/h on the SystemSix. According to Cannondale, you’d need to put out 309 watts on the SuperSix Evo in order to match that speed. That’s a huge difference.

As mentioned, these are all claims from Cannondale. Cannondale says that even though the SystemSix is heavier than its SuperSix Evo (we weighed the HiMod Ultegra Di2 model in a 58cm frame size, including bottle cages and computer mount, at 7.8kg), its aerodynamic superiority makes it faster on any slope up to about 6% (it’ll depend a little on the rider and the power they’re putting out). The lower the slope and the higher the speed the more the balance tips in favour of the SystemSix. 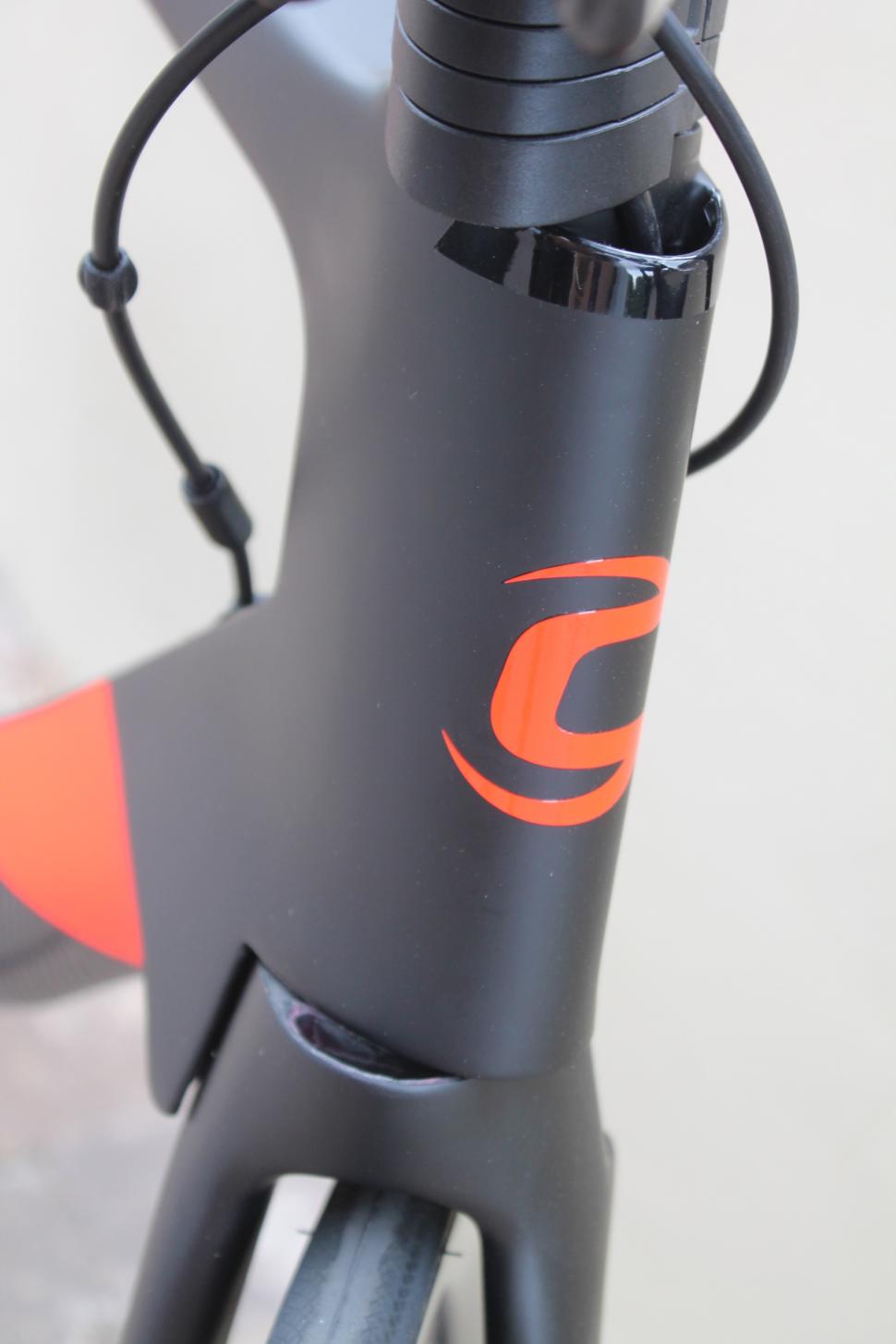 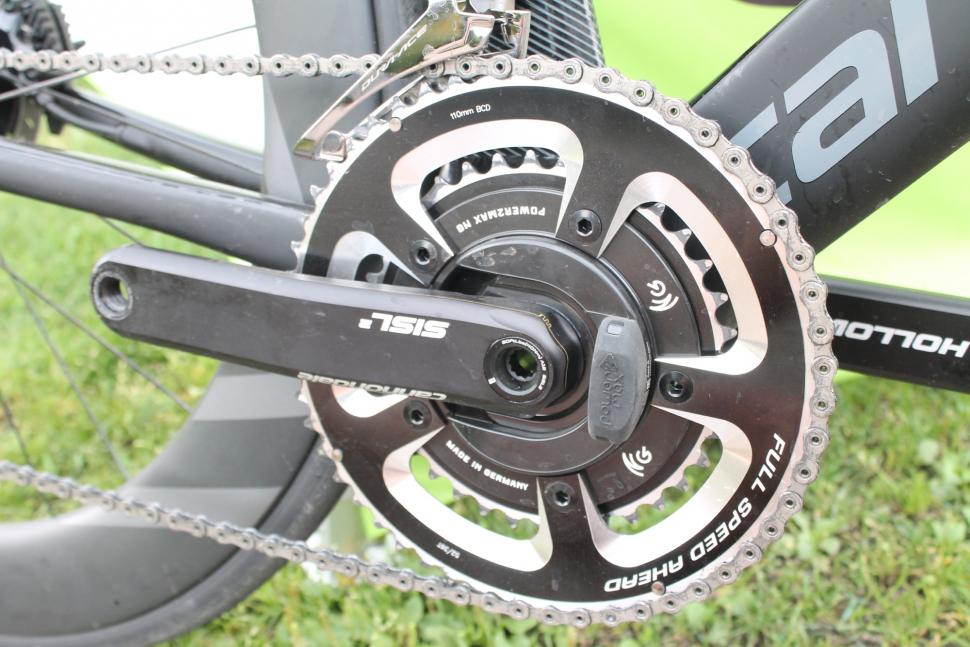 On top of the bike’s retail price, you’ll need to pay a onetime payment of $490/€490 to Power2Max in order to activate it. Cannondale expects 70-80% of people to do this because it’s a cost effective way to get a good system. A switchplate installed at the top of the down tube houses a Di2 junction box or allows for mechanical cable routing (as shown here).

You also get two different bottle cage position options on that down tube. Cannondale says that the down tube and the seat tube have been shaped to minimise the negative aerodynamic impact of adding water bottles. 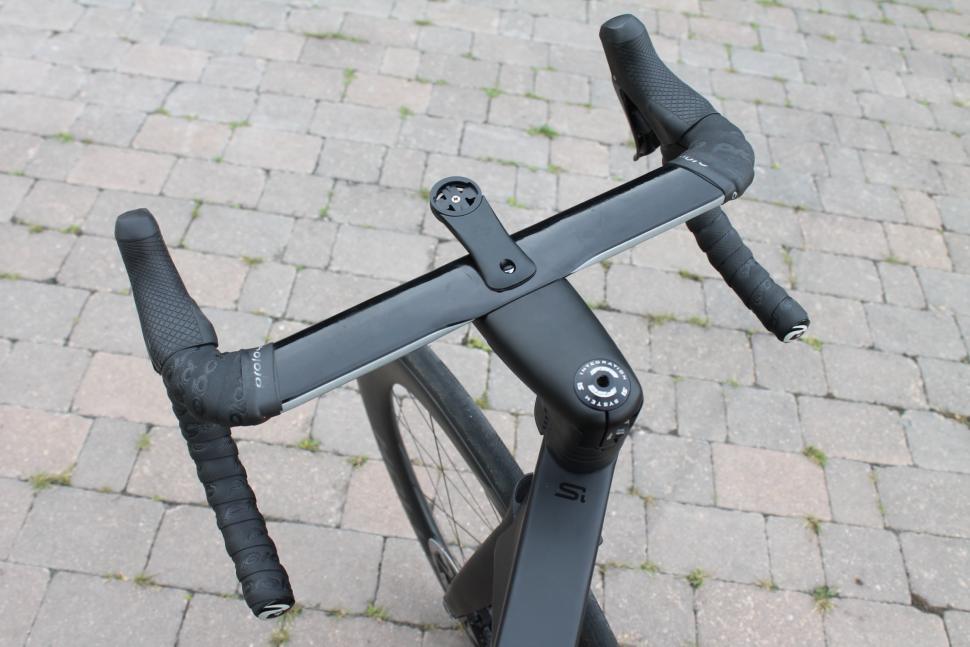 The internal cable routing isn’t too complicated at all, although Cannondale has had to introduce a steering stop to prevent the need for anything more convoluted. It’s at 50°. You’re unlikely to notice it in use unless perhaps if you’re trackstanding.

All of the bikes in the range come with reflective elements on the rear facing parts of the frame to improve visibility.

There are five models in the 2019 range which will begin to become available from September, two using Cannondale’s BallisTec carbon and three featuring higher end BallisTec Hi-MOD. They’re all built up with Shimano groupsets. Cable routing is external between the handlebar and the down tube on the mechanical shift models. Cannondale says that this adds the equivalent of a watt’s worth of drag at 30km/h (18.6mph).

Get more info, including a white paper, at Cannondale.com/SystemSix.