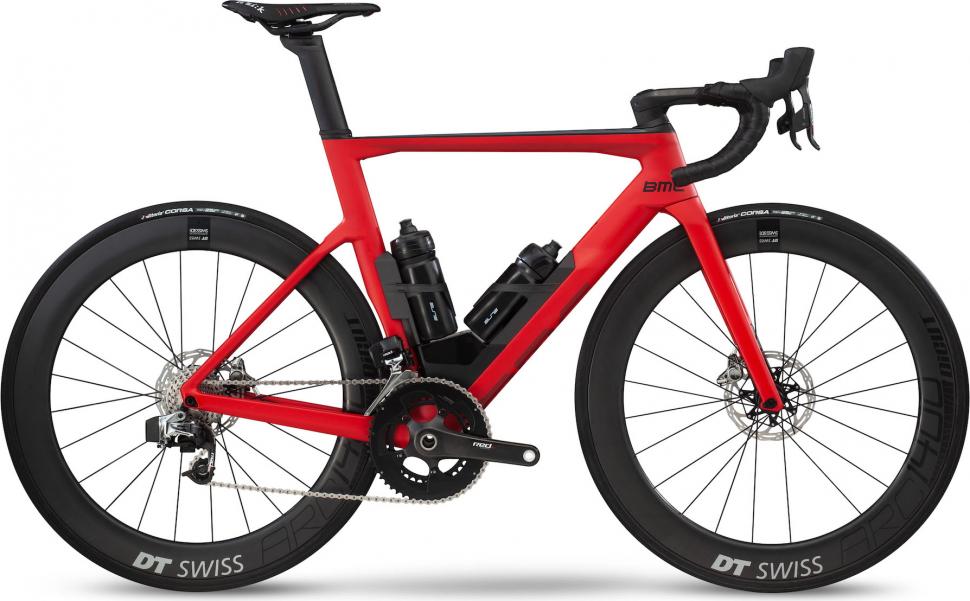 Hope you've not had your fill of aero road bikes yet this week? Here's another brand new one, this time it's the BMC Timemachine

Six years after the launch of its first aero road bike, BMC has unveiled the brand new Timemachine Road this week. It’s designed solely around disc brakes and features integrated storage and a water bottle design that minimises drag at wider yaw angles. Covering the launch of the original Timemachine aero road bike was one of my first assignments upon joining road.cc back in 2012. That was an awfully long time ago, I’ve since moved out of London, lost a bit of hair and gained a few wrinkles.

But enough about me! The Timemachine was well overdue an update, the forgotten bike in BMC’s range, even the pro team don’t use it. Time marches on rapidly in the bike world, especially where aerodynamics are concerned, and you’ll have seen a whole raft of the latest generation aero road bikes being launched this week. This is a very timely launch then.

“Designed to deliver maximum efficiency for the most powerful riders during all-out sprints and accelerations, the new Timemachine Road features key innovations like an aerodynamically perfected frame, a class-leading integrated with a ICS Aero cockpit and the all-new Aero Module re-purposes hydration and storage elements for aerodynamic performance elements through a functionally integrated design,” explains BMC. 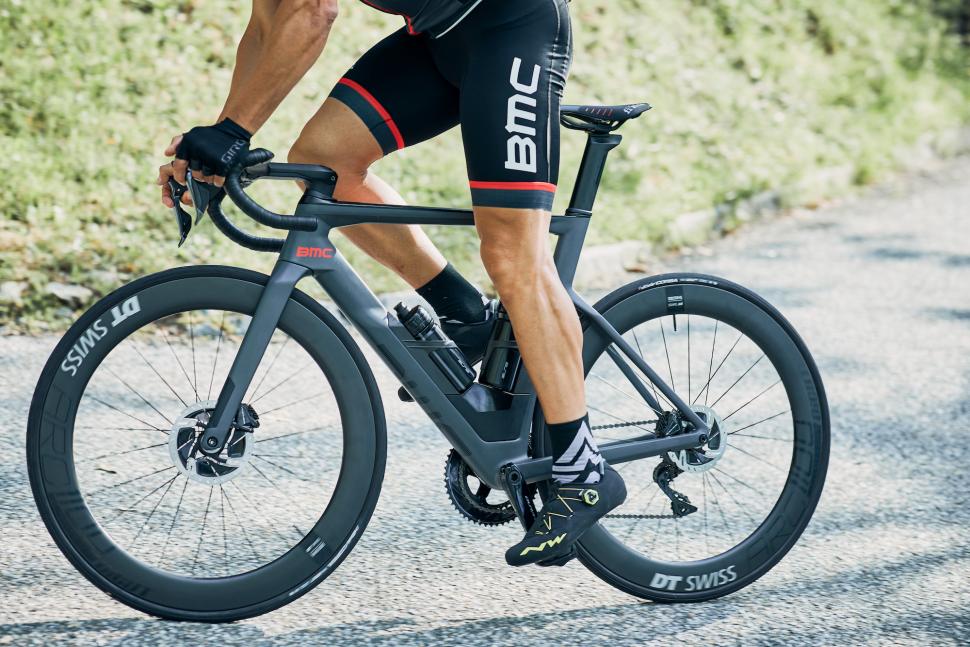 First and foremost, the new Timemachine is only available with disc brakes. It’s not alone, the Specialized Venge and Cannondale SystemSix take this same approach. It’s been designed using CFD simulation, tested in a wind tunnel and on a velodrome, and thorough testing on the road. No doubt the pro team have been involved and some of the team will be using it at this year’s Tour de France.

As previously mentioned, it’s designed around disc brakes, with 12mm thru-axles and flat mount calipers. The frame weighs a claimed 980g and the fork, with an uncut steerer tube, is 410g. The aero seatpost adds 190g. The fork is interesting. It’s an asymmetric design, nothing unusual about that, but it’s the aero fairing that attempts to reduce drag around the brake caliper that is eyebrow-raising. 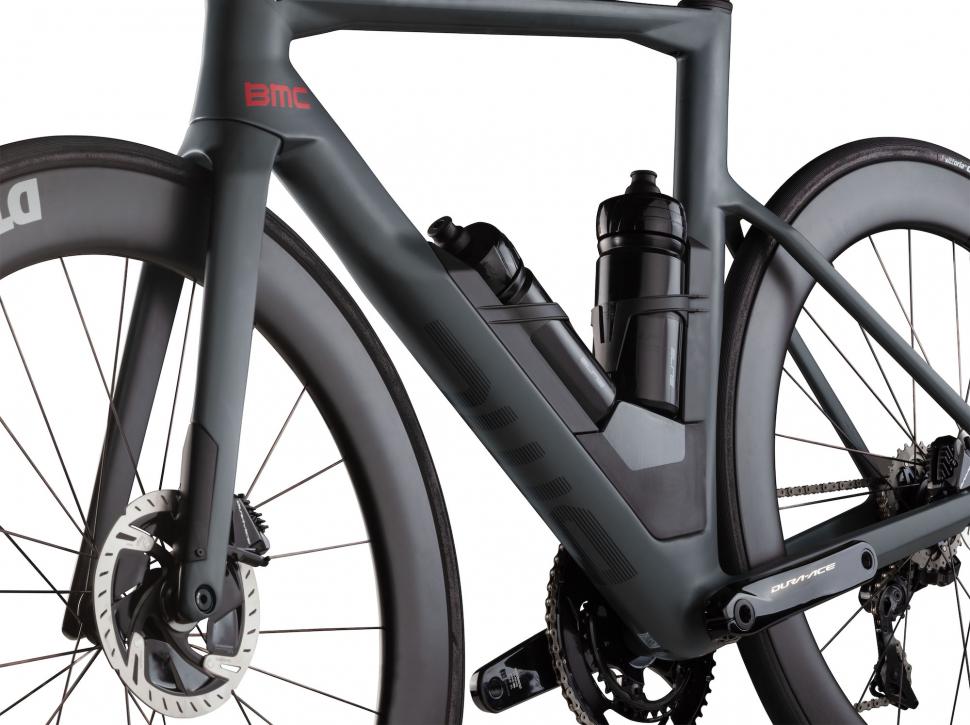 Only the Parlee TT bike and possible Scott Foil Disc spring to mind as offering anything remotely similar. Does it constitute a fairing and should it be banned by the UCI? It would appear not, based on this bike having UCI approval granted already.

Integrated storage and water bottles are a key part of the new bike, in what BMC calls the Aero Module. The aim is to eliminate the drag created by a traditional water bottle cage, smoothing the transition from the frame to the water bottle. It has worked with Elite to developed these special cages and 550ml water bottles that fit flush with the frame. Obviously, these fairings will need to be removed for UCI races but average riders will be able to make use of them for sure. 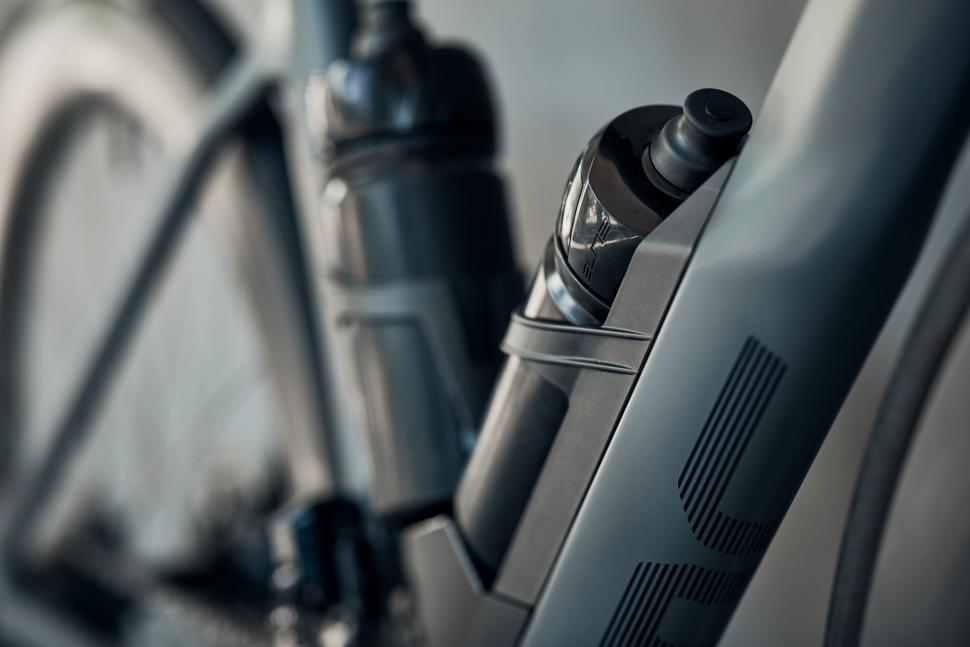 There’s also integrated frame storage, useful for triathlon and real-world riding, but it needs to be removed for UCI racing as it counts as a fairing. It’s the sort of thing we’ve seen previously with Specialized and its SwatBox, allowing essentials like tubes and tools to be stored safely in the empty space at the bottom of the seat tube/downtube junction.

More integration exists with the Shimano Di2 junction box hidden inside the down tube, as a lot of bike brands are doing at the moment. 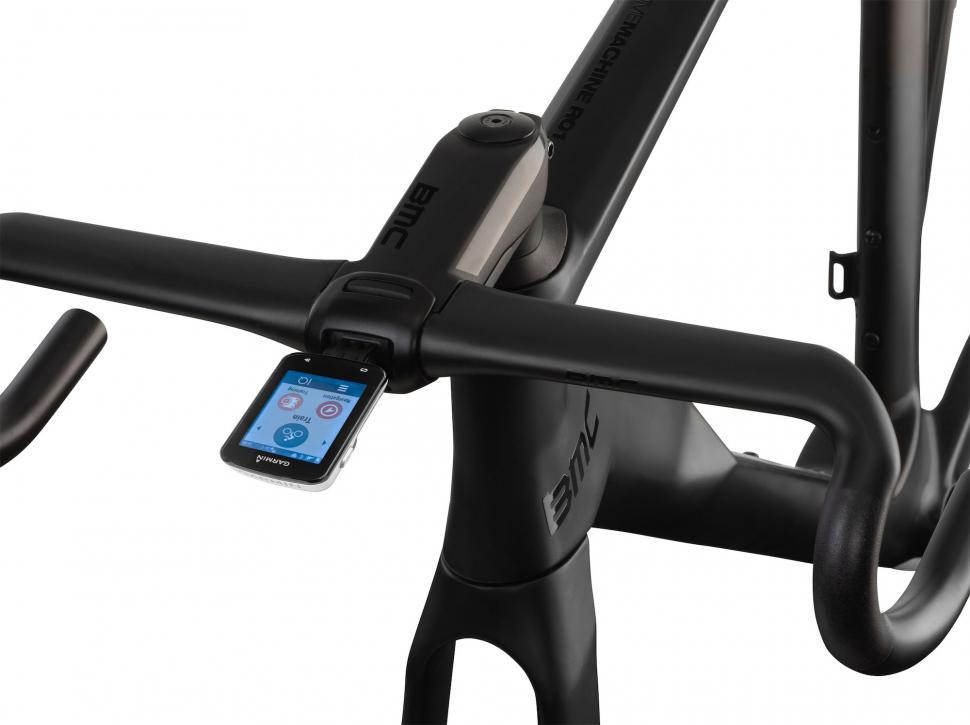 BMC has developed the new ICS Aero handlebar and stem, a two-piece aero shaped handlebar similar to the one we saw on the Teammachine we tested a while back. It routes all the cables and brake hoses from the shifters into the frame. It allows easy fit adjustment with removable steerer tube spacers.

Comfort has considered, with the Tuned Compliance Concept (TCC) involving specially shaped tube profiles and carbon fibre layup, particularly in the rear stays and fork blades, to deliver a smoother ride than the old Timemachine.

In testing, BMC claims the new bike saves the rider power compared to the Teammachine. “For a comprehensive assessment of the aerodynamic performance of the Timemachine Road 01 in a controlled environment, we conducted several test sessions on the track with different types of riders,” explains Stefan Christ, Head of BMC R&D.

“Through an identical test environment we were able to compare the Timemachine Road 01 directly with the Teammachine SLR01, and several hours and kilometers later the new Timemachine Road 01 provided consistent and measurable power savings for all types of riders.”

We’ll have more detail on this new bike soon.