Every year the cycling media are asked to pick three standout pieces of work at the Bespoked Handbuilt Bike Show, here's our selection…
by David Arthur @davearthur

Picking just one standout bike, let alone three, is a extremely difficult task when you’re stood in the middle of the Bespoked UK Handbuilt Show surrounded by some of the most wonderful cycling creations you’ve ever seen.

But pick three bikes for the road.cc Choice Awards we did, and the winners are Prova, Kimik and Cicle Barco. We’ve included a couple of special mentions as well. Last year the winners were Woodrup, Cyfac and Reynolds.

How did we choose the winners? We’re looking past the pretty paint jobs to find the bikes that we deem to be technically interesting in pushing the boundaries for custom bikes, a bike that reflects the riding we and you do, and then anything cool in the road or urban cycling sphere. You can never know what sorts of bikes are going to be there until you do a lap of the show. 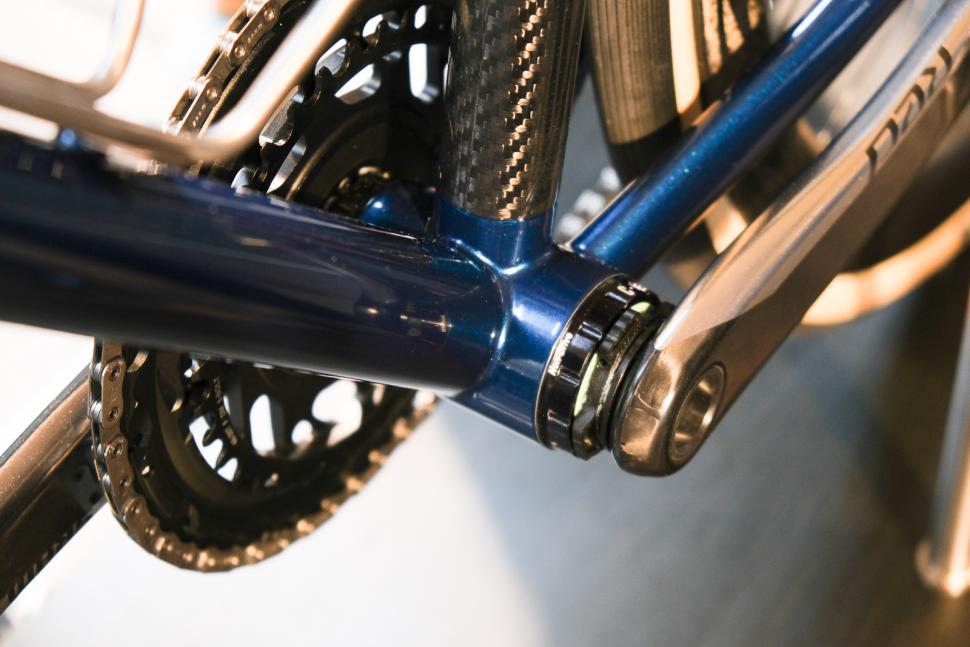 This year there were a lot of gravel and adventure bikes, many on 650b tyres, and some sleek modern disc-equipped road bikes employing the very latest cutting-edge technology. We also spotted a trend for T47 bottom brackets, Saffron telling us one of the benefits is easier internal cable routing, and handlebar porter bags - not a new thing but clearly back in fashion due to the rise in popularity of bikepacking. There were also a lot of the new SRAM Red eTap AXS groupsets on show too. 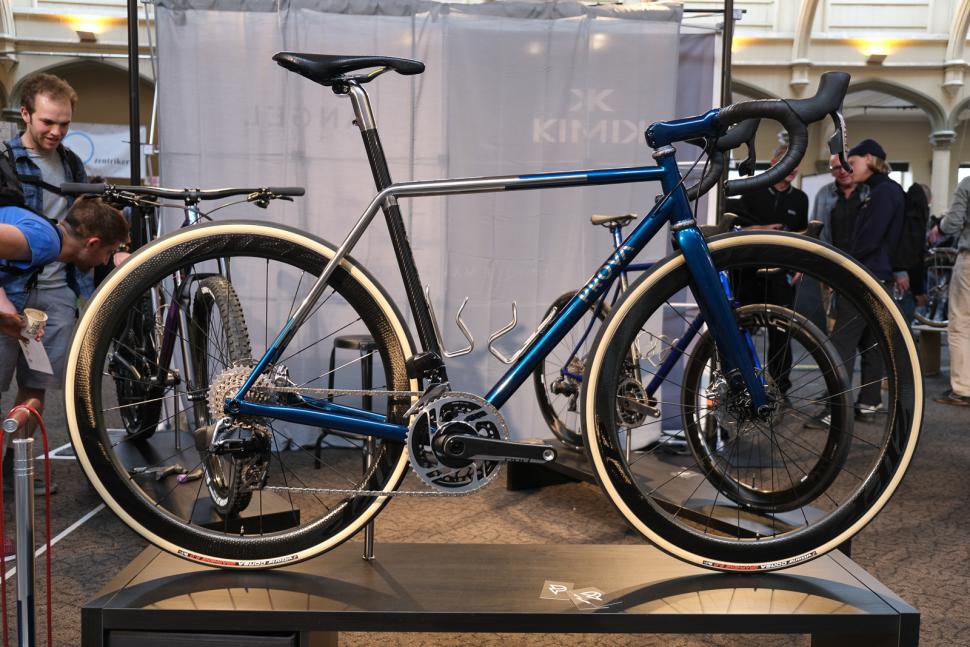 All the way from Australia comes this tech-laden disc-equipped road bike from Prova. Also one of the prettiest bikes on display too. 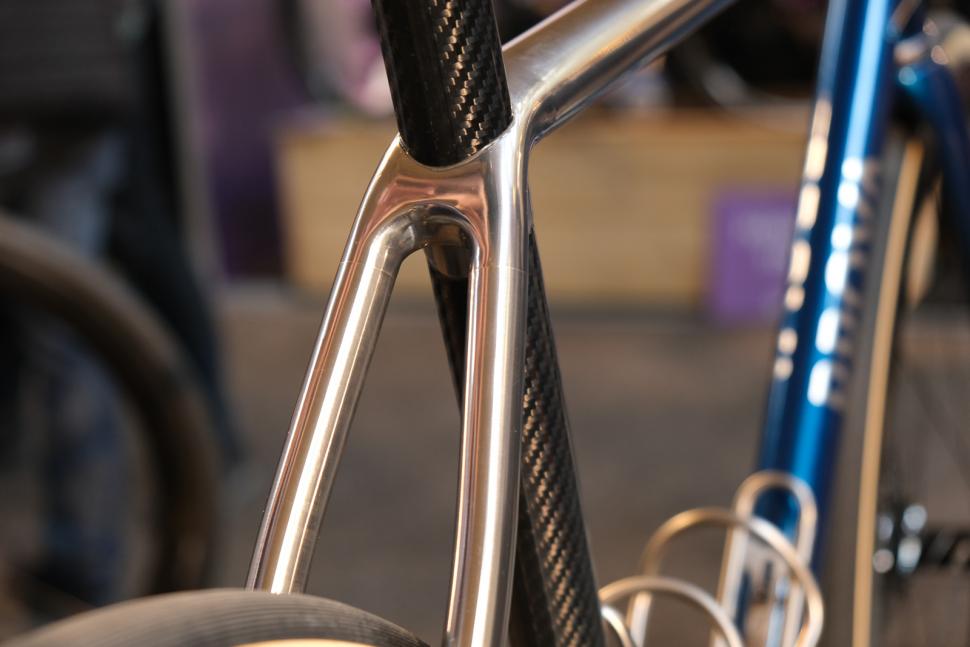 What’s special, and what sets it apart, is the combination of Columbus XCr and Reynolds 953 stainless steel tubing with 3D printed steel dropouts and seat cluster, and a custom layup carbon fibre seat mast, something used to good effect by Italian brand Scapin some 10-15 years ago. 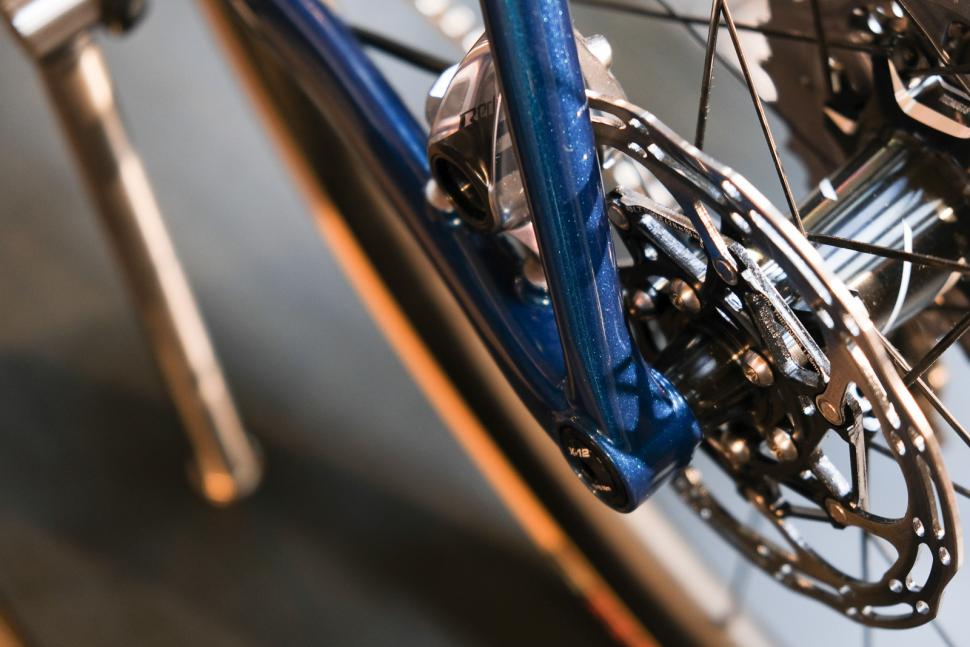 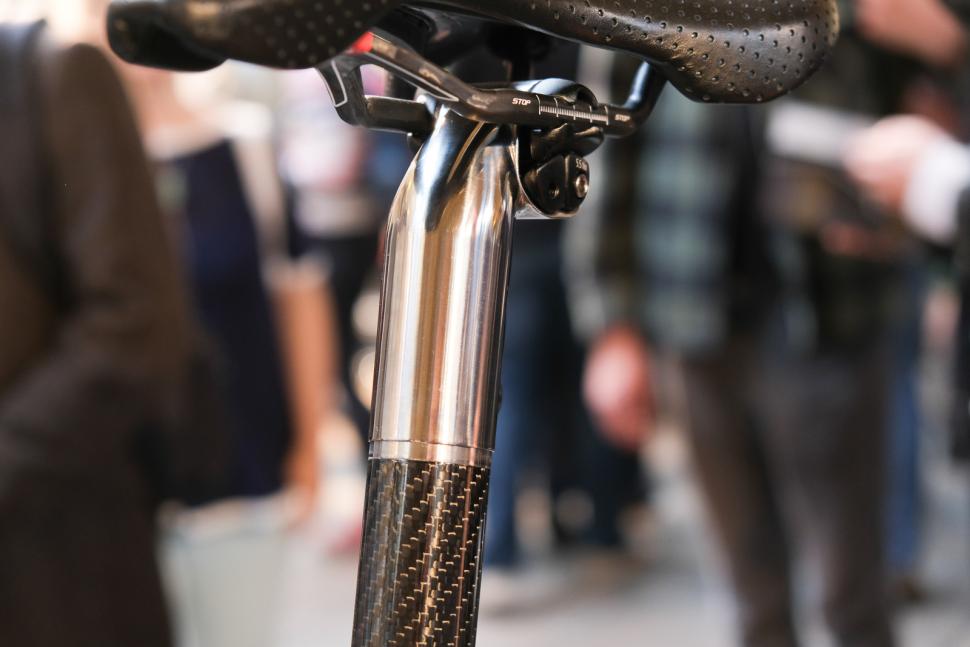 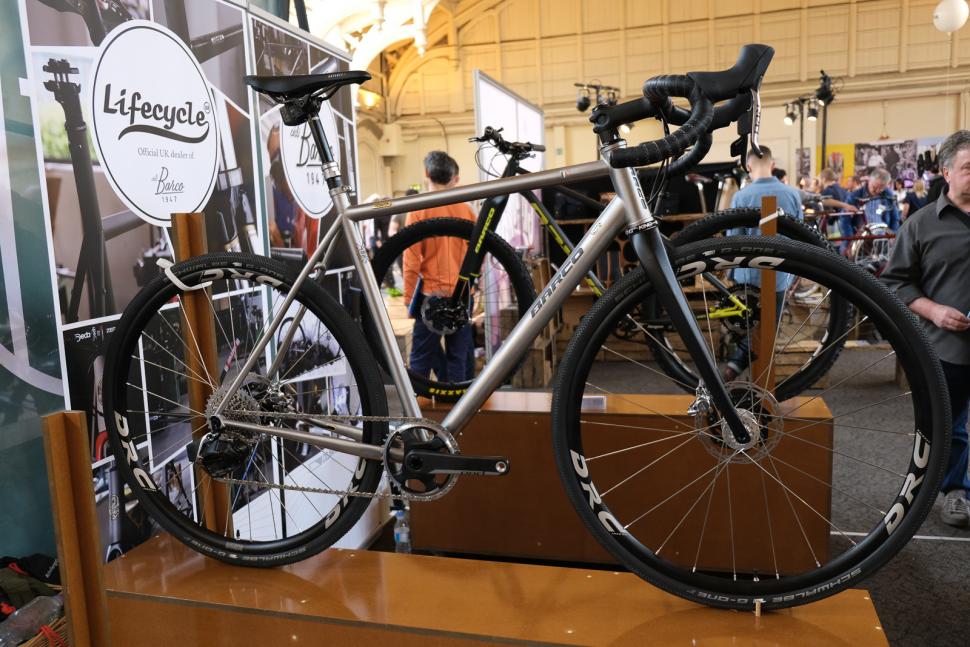 Cicli Barco is an Italian bike brand you’ve probably never heard off, but it has been contract manufacturing frames since 1947 and the quality of workmanship on show was on another level. It had many nice bikes on its stand but our collective gaze was drawn to this on-trend (the road.cc ban has been lifted on that phrase just for this bike!) gravel and adventure bike.

"Few brands offer such a mix of adaptability, future-proofing, problem solving, and cosmetic flair. After 72 years of manufacturing for other brands as a sub-contractor, this could be the most qualified brand you've never heard of," adds Richard Peploe, road.cc judge. 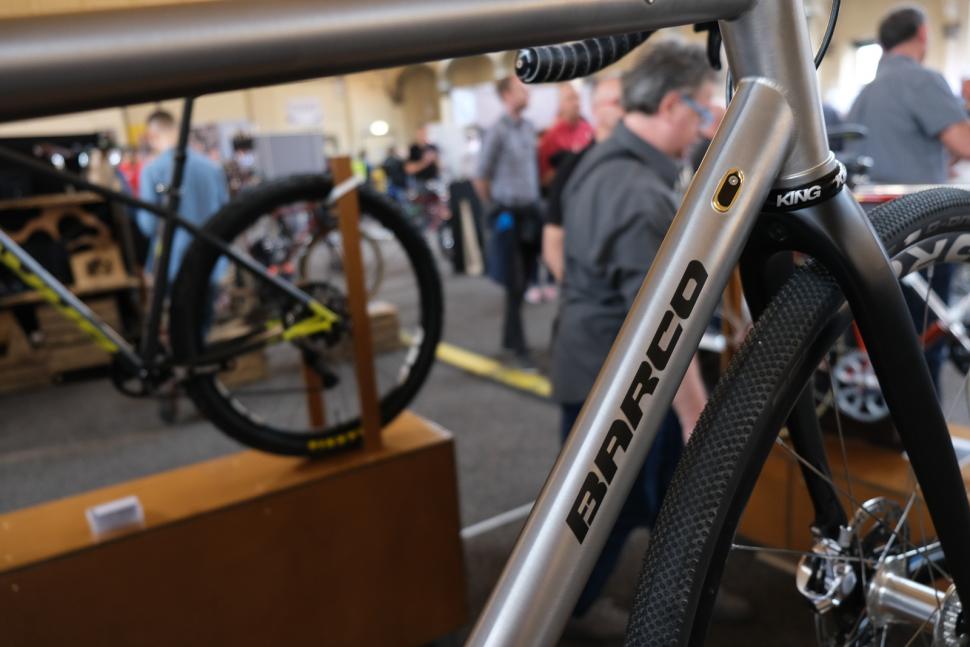 It’s made from Columbus XCr stainless steel tubing with a carbon head tube insert and the finish is simply gorgeous. 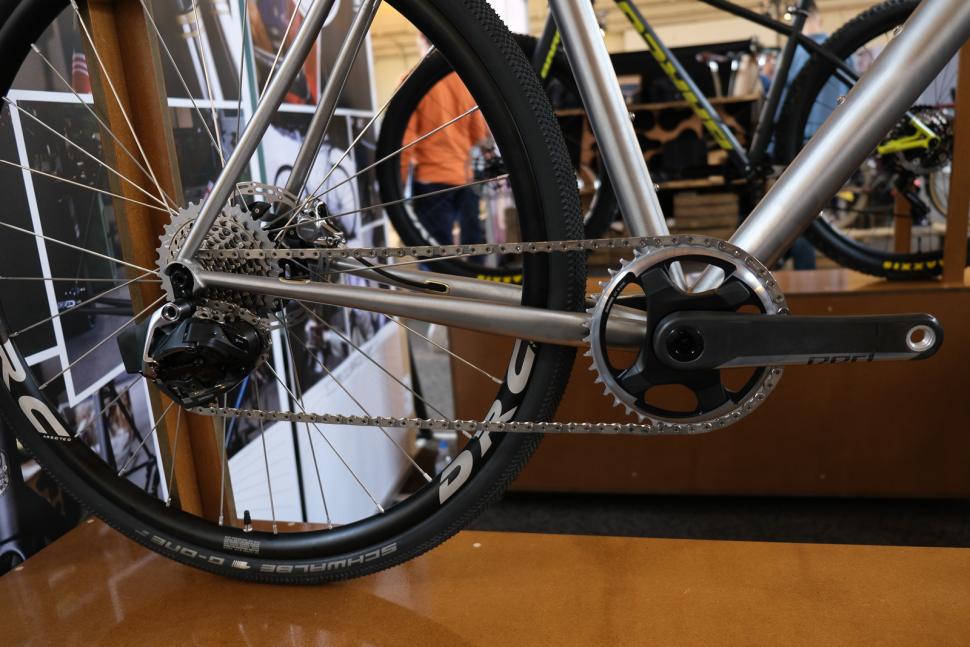 Spanish company Kimik makes our selection for the interesting - and potentially groundbreaking - technology used to make the custom carbon monocoque frame on their stand.

"The ability to use monocoque construction for a carbon fibre frame is usually only viable for the largest producers; the attractions of complete customisation are usually only possible with other materials or construction methods. Kimik promise to deliver the advantages of both," comments road.cc judge Richard Peploe. 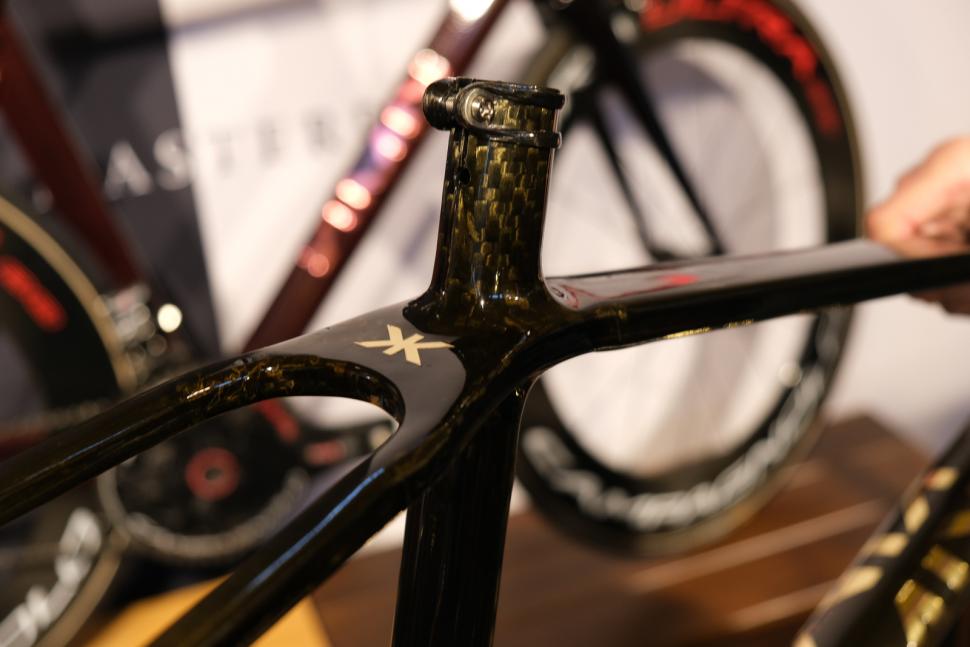 Normally, if you want a custom carbon frame you’re looking at a tube-to-tube frame like a Parlee because it’s a construction method that mirrors the flexibility of a steel/titanium frame build. Kimik, however, has developed customisable reusable moulds that let it provide full custom geometry on a carbon monocoque.

Moulded monocoque construction is much favoured by the makers of high end carbon bikes because of the shapes and tube profiles it allows you to create - in theory allowing you maximise both the aero performance of a frame, while also manipulating its ride characteristics - and keep it’s weight down. The downside is that the moulds are very expensive, having one made for a one off custom bike would be eye-wateringly expensive. Not any more. 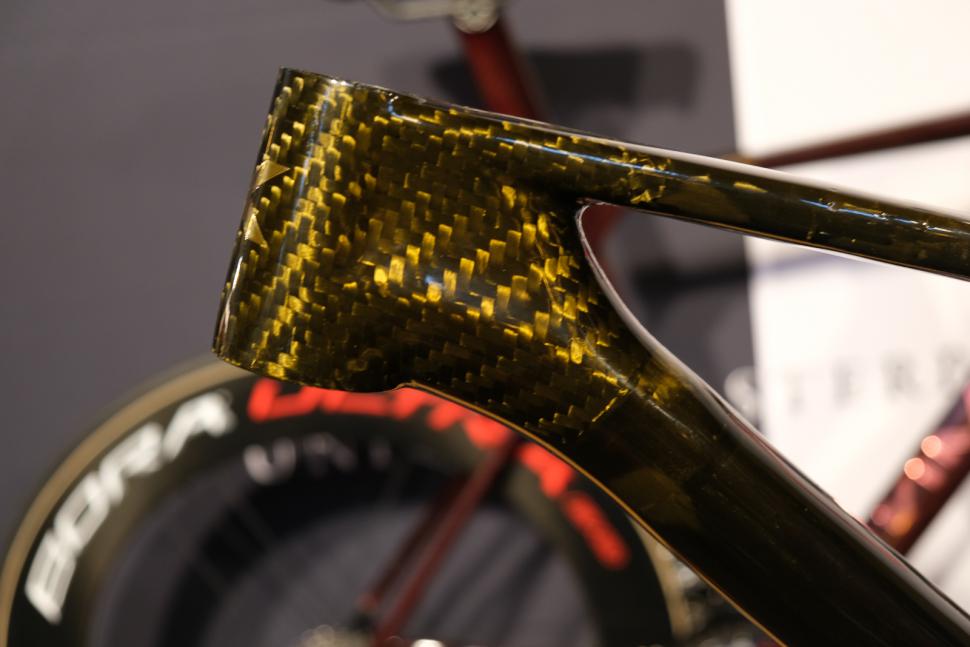 Kimik, claims to have developed customisable reusable moulds that let it build full custom geometry monocoque frames. They’re still not cheap, we were quoted around €5,000, but that’s more or less in line with the cost of similar top end off the peg bikes.

To develop the process it has partnered with the University of Salamanca and it obviously wasn’t too keen on spilling the beans on the exact details of this patent-pending process. If though their new technology lives up to the claims it could be a game changer for both custom and off the peg carbon monocoque bike frames – that’s why it gets our vote. .

Here are a few other things that caught our attention…

From the same company behind Kimik is Angel which focuses on titanium and steel frames - they had a jaw dropping Ti gravel bike on show, but more interesting still is the adjustable stem and seatpost the company has developed. We’ve seen adjustable length stems before but none as neat and tidy looking as this one . The big wrinkle here is that both are designed to be adjusted on the fly - twist the barrel on the stem one way and it gets longer, go the other way and it goes shorter. 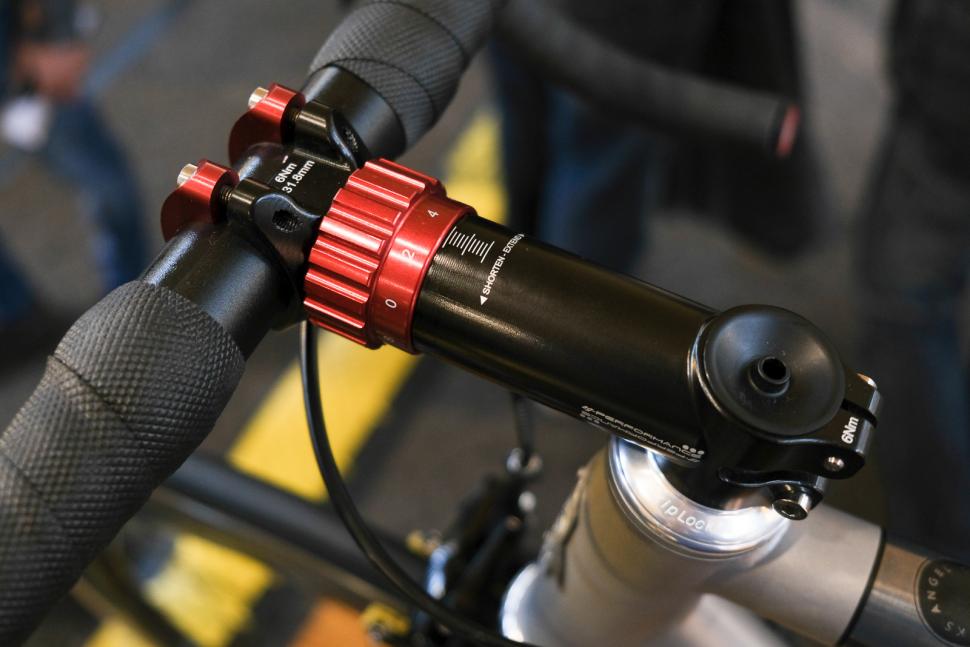 The seatpost is similarly clever in its design - you twist the knob to move forwards if you want to get right over the bottom bracket on a climb,  or backwards on the rails for a stretched out position on the descent.

The thinking here is that while your position on a ride is not static governed by factors such as terrain, topography - the wind etc getting the optimum position for a big climb, a change in terrain, or just to get maximum power down is not possible because your two main contact points your handlebars and saddle are fixed and by definition have to be something of a compromise. If these two prototypes deliver you could change your position on the move to achieve maximum efficiency at the twist of a dial.

We could see the stem being particularly useful for adventure/all-road bikes; wind it in for off-road use, wind it out for road riding. 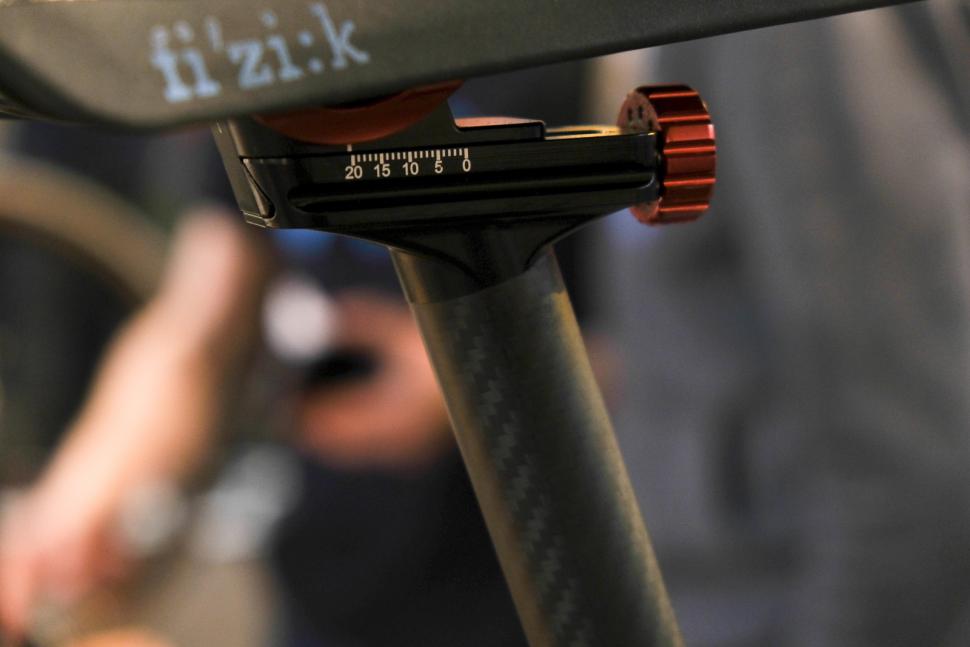 It could also be used by bike fitters to let customers try out different length stems on the road without the faff of changing stems. 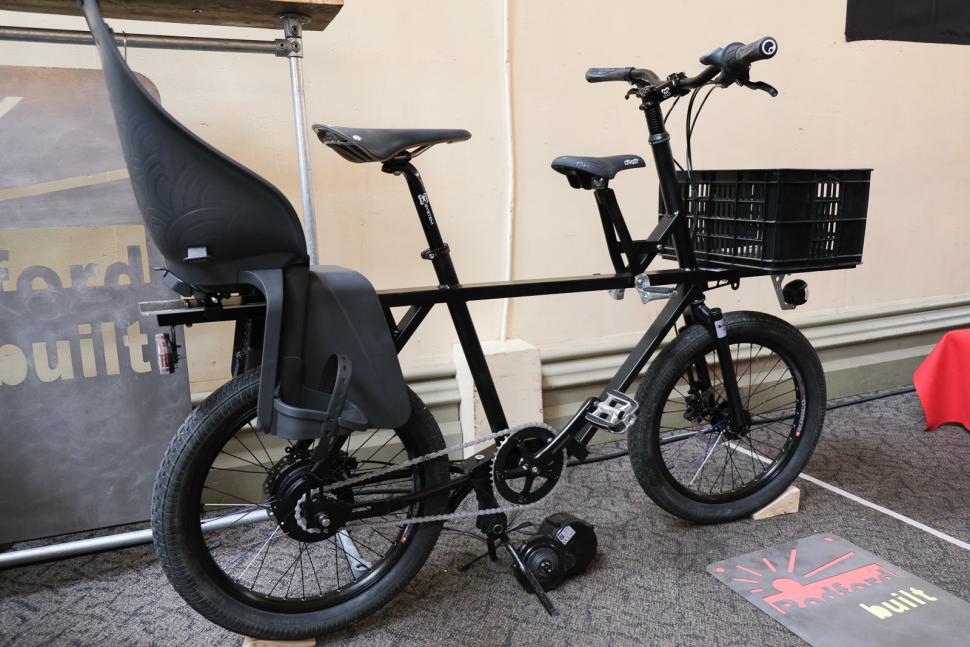 Another really interesting bit of cleverness on a very different bike is this machine from Bristol outfit Rodford Built Transport. It’s a bike built for families and very much with the school run in mind - you probably guessed that from the two child seats, which can be replaced by a back rack for the family shop. What’s really interesting though is its modular design. Moving a kids plus shopping around by bike is pretty hard work, the ideal scenario would be to have electric assist on your bike. Not everyone can afford an ebike though. With this design you can buy it as a standard bike and then then when funds allow plug in an electric motor. Smart. Thinking like that is one of the reasons we like the Bespoked show so much. 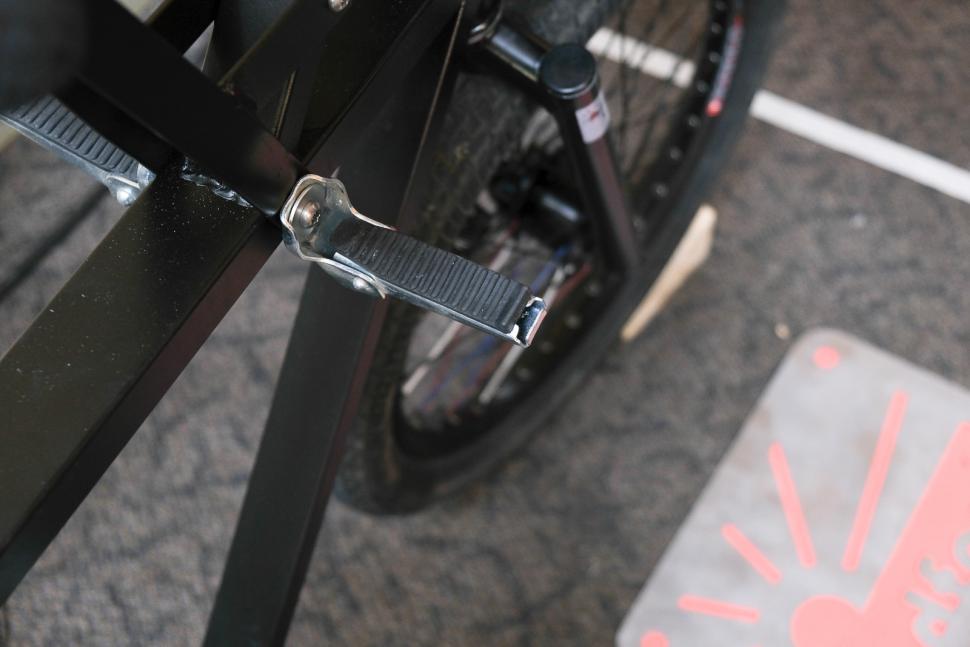 Look, it's even got little fold out foot pegs for kids. 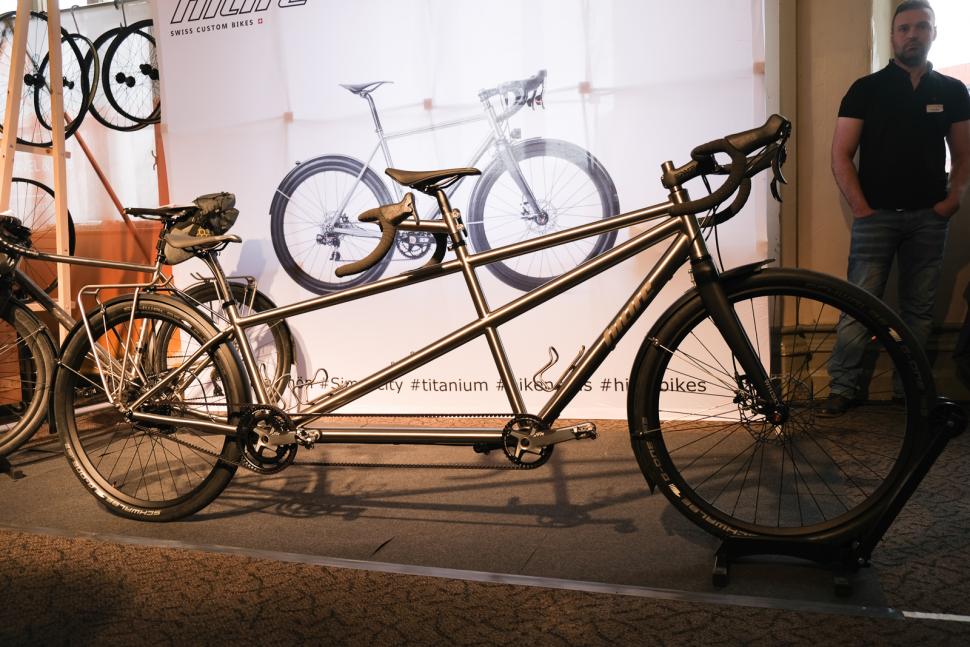 Tandems are a niche but this titanium creation from Swiss brand Hilite is worth sharing. It’s crafted from titanium and is packed with details. It’s using a twin belt drive with the chainrings on the normal side so standard cranks can be used - on a cross-over set up the timing chain is on the left-hand side, so both left-hand cranks are non-standard because they have a spider, but with the opposite pedal threading to normal. The belt drive drivetrain is all on one side which means standard sized chainrings can be used. There's a Rohloff gear hub out back. 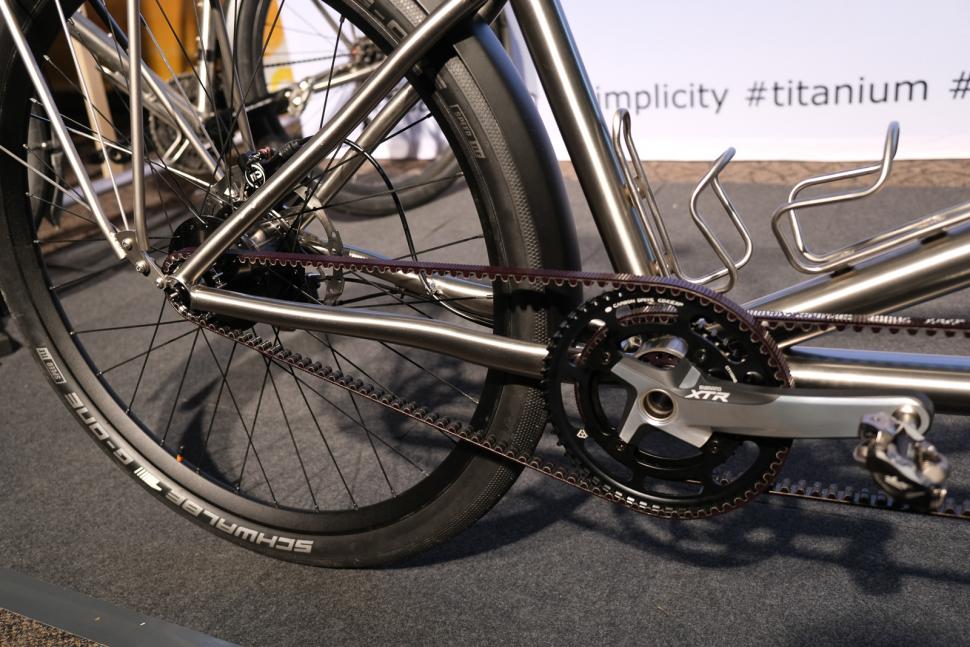 The stoker gets a flexy seatpost and dummy hoods, while the pilot gets an Enve aero carbon handlebar, and the fat tyres should provide a smooth ride in conjunction with the titanium frame. 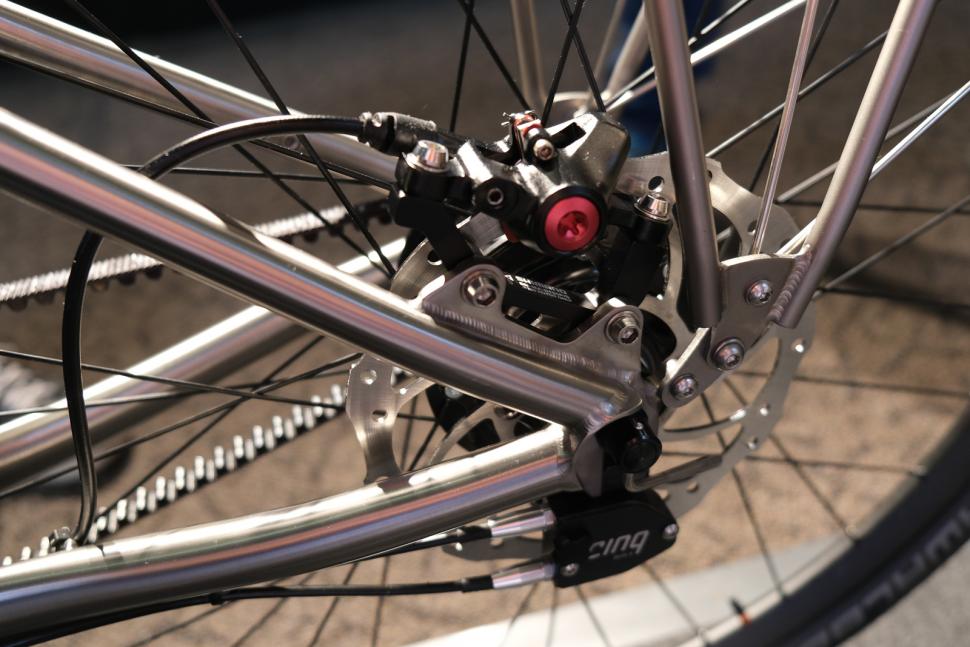 It’s super light too, I picked it up and was astonished at how light it felt, and also how balanced it felt too - normally when you pick a bike up with a Rohloff gear hub the rear wheel is cemented to the ground. Oh and the weight? Just 13kg without pedals. For a tandem!

If you're going to the show and would like to proffer your choice awards please do share them in the comments section below.