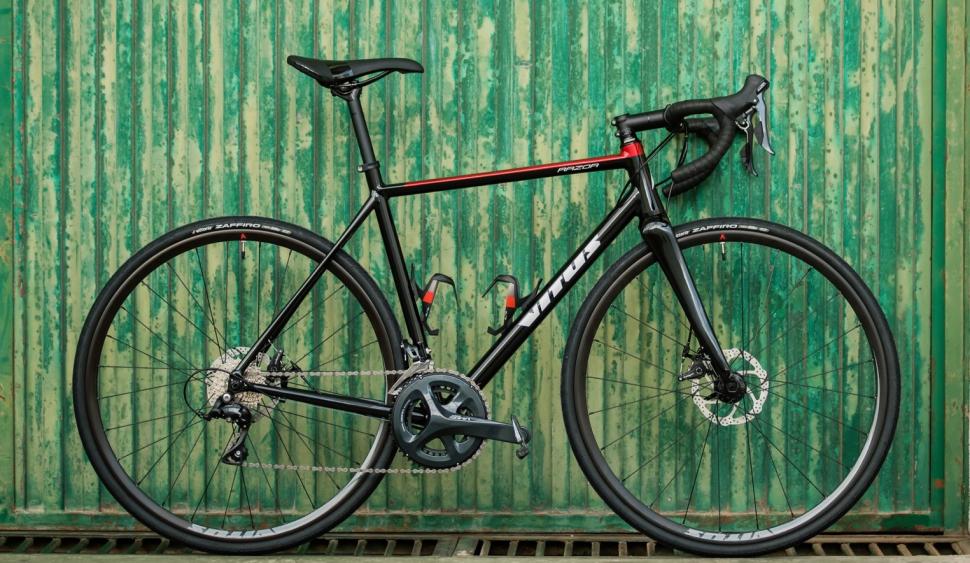 Zenium gets a new carbon frame, entry-level Razor gets disc brakes, and Mach 3 fitness/city bike gets a makeover
by Mat Brett

Vitus has unveiled its 2019 road and fitness/city bike range which includes a new carbon-fibre frameset for the Zenium, disc brake versions of the entry-level Razor and a revamp of the flat handlebar Mach 3s. There's a new Auro CR time trial bike too.

Most of the road bikes in the range are now equipped with disc brakes (flat mount standard with 12mm thru axles), although you can still choose between disc brakes and rim brakes with the Razor.

Here are the highlights... Last year's Zenium bikes were aluminium but Vitus has introduced a carbon fibre frameset for 2019.

The Zenium is designed as an all-rounder that can act as everything from a winter workhorse to a nippy sportive bike. The frame and fork are both made from T700 HM-UD carbon fibre.

Unlike its aluminium predecessor, the carbon model does not have mudguard eyelets. Vitus says that with many brands doing very good clip-on mudguards, it thought this a compromise worth making.

The cheapest Zenium, equipped with a Shimano Tiagra/Sora groupset and TRP Spyre cable-operated disc brakes, is £999.99 – just £100 more than the similarly specced 2018 version with an aluminium frame.

The Zenium CR and CRW (the women's version) each come with Shimano's mid-level 105 groupset, including hydraulic disc brakes, and they're priced £1,399.99. We've not ridden either of these bikes but it they're anything like as good as last year's aluminium Vitus Zenium SL VRX Disc then you're getting a lot of bike for your money here.

The Zeniums are fitted with 28mm wide tyres although there is clearance for 30mm if you want to swap in the future. The entry-level Razor, which shares the Zenium's compact geometry, was previously available only with rim brakes but Vitus has added disc brake options for 2019. Whatever brakes you go for, the frame is 6061 double-butted aluminium.

"The tapered head tube paired with the carbon fork results in lightweight, responsive steering," according to Vitus. "The double-butted frame reduces weight in key areas yet allows thicker sections where added strength equals enhanced performance. The result is a perfect blend of flex and stiffness providing a comfortable yet efficient ride.

The cheaper of the two disc models is £649.99 and is equipped with a Shimano Claris 8-speed drivetrain and Tektro MD-C510 mechanical disc brakes.

The Razor VR Disc (pictured above) is £100 more expensive at £749.99. Go for this model and you step up to a Shimano Sora 9-speed drivetrain with a 50-34-tooth chainset, the same as you get on the cheaper model, but with an 11-32-tooth rather than an 11-28-tooth cassette, giving you a wider range of ratios. You also get Tektro Spyre mechanical disc brakes.

Assuming that the disc brake Razors ride as well as the rim brake models, these look like great value for money. The Auro CR is a new time trial/ triathlon bike. Unlike most of the road bikes, it is fitted with rim brakes.

"The Auro combines a completely re-engineered frameset with improved cockpit adjustability and increased tyre clearance over its predecessor, the Chrono," says Vitus.

"The Auro has a T700 unidirectional carbon frameset with aero optimised internal cable routing and an integrated carbon aero stem. It features direct mount brakes with the rear brake integrated into the frame under the chainstays, an integrated seat clamp, an aero seatpost, and an oversized bottom bracket to increase power transfer."

The Auro currently comes in just one build: Shimano 105 drivetrain with Vision Metron bar end shifters, Prime Black Edition wheels (65mm deep rim at the front, 80mm deep at the rear), and Zipp Vuka Alumina base bar and extensions. It is priced £2,699.99. 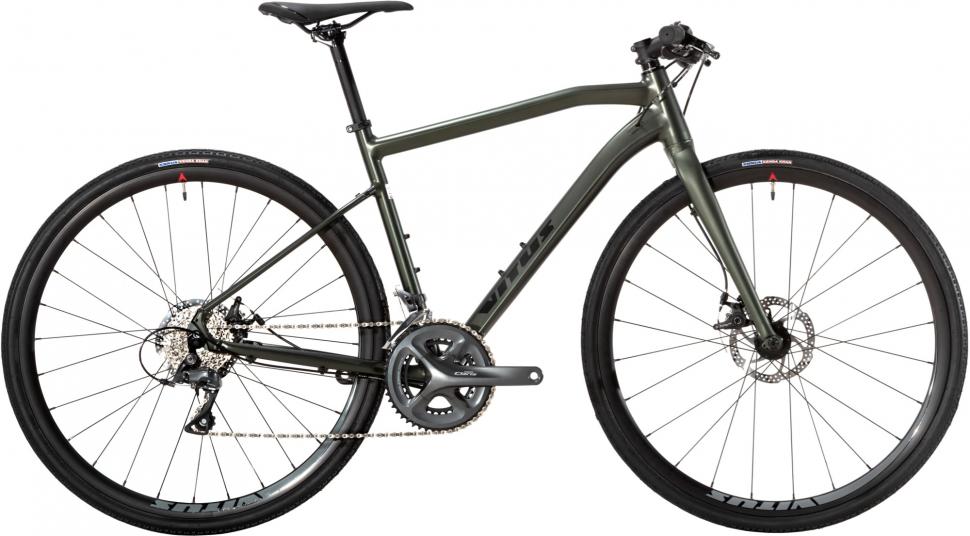 The flat handlebar Mach 3 fitness/city bikes have been redesigned with a frame that, while still made of 6061 T6 aluminium, looks entirely different from previously with a kinked top tube and dropped seatstays. As previously, the Mach 3 lineup is disc brake only.

"Whether you ride the Mach 3 around your local forest loop at the weekend, or on the commute to work with panniers, this bike delivers, in a comfortable and accessible riding position," says Vitus.

"An aluminium fork and steerer with tapered head tube, combined with flat bar-specific stem lengths, result in reliable
and confidence inspiring steering. Fully integrated cable routing keeps everything nice and tidy, allowing you to make the most of the bikes rack and mount capabilities. Fit mudguards to keep you dry, and a rear luggage rack to carry anything from your laptop to shopping."

There are three Mach 3 models in the range. The entry-level Mach 3 VR (pictured above), £549.99, is built up with a Shimano Claris 8-speed groupset and TRP Spyre mechanical disc brakes.

For more info on the entire Vitus range – including 2019 specs on the ZX1, Vitesse and Venon road bikes, and the Dee and Vee urban bikes – head over to vitusbikes.com.