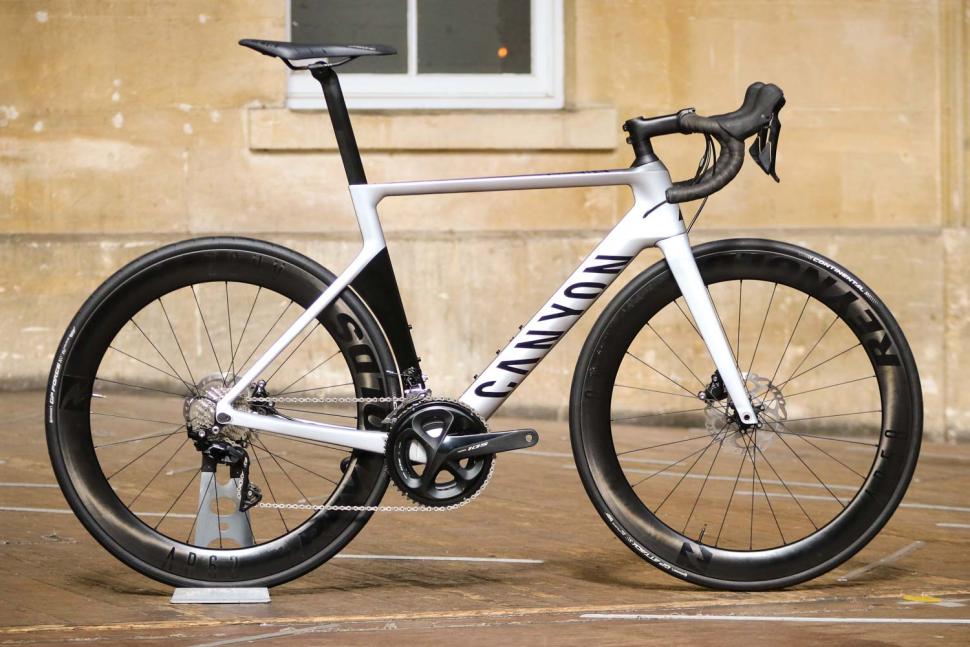 The second generation Aeroad, the German company’s aerodynamic road bike, was launched in 2014 ahead of the Tour de France, and given a disc brake facelift in 2017. And now in 2019, you can get the Aeroad CF SL, same frame but less expensive carbon fibre, starting from just £2,449 with rim brakes and rising to £4,249, after which you jump up to the CF SLX version. It’s offering both rim and disc brakes, with a £400 premium for the latter. 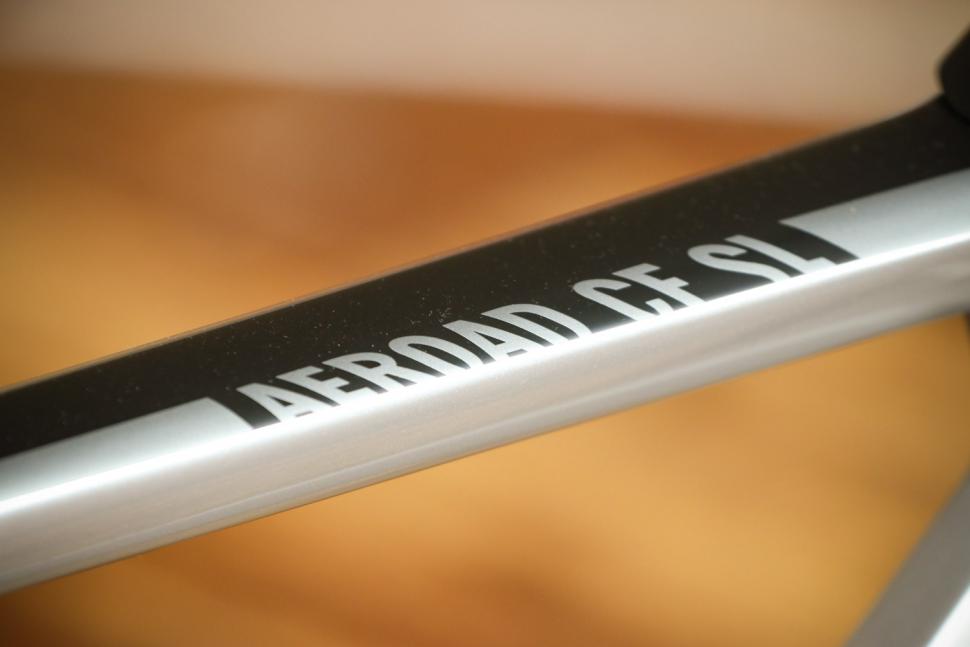 The new Aeroad CF SL, as with previous CF SL versions of the Ultimate and Endurace, means you get the same frame as the posher CF SLX bike but a lower grade of carbon fibre brings the price right down.

Canyon says the weight penalty of this lower grade carbon is small, no more than 120g, and that lateral stiffness is also decreased by a marginal amount.

All the critical aerodynamic tube shapes and features, including the company’s own Trident 2.0 profile and internal seat clamp and cable routing, are present and correct however, so in terms of aero performance there's no trade-off at all. 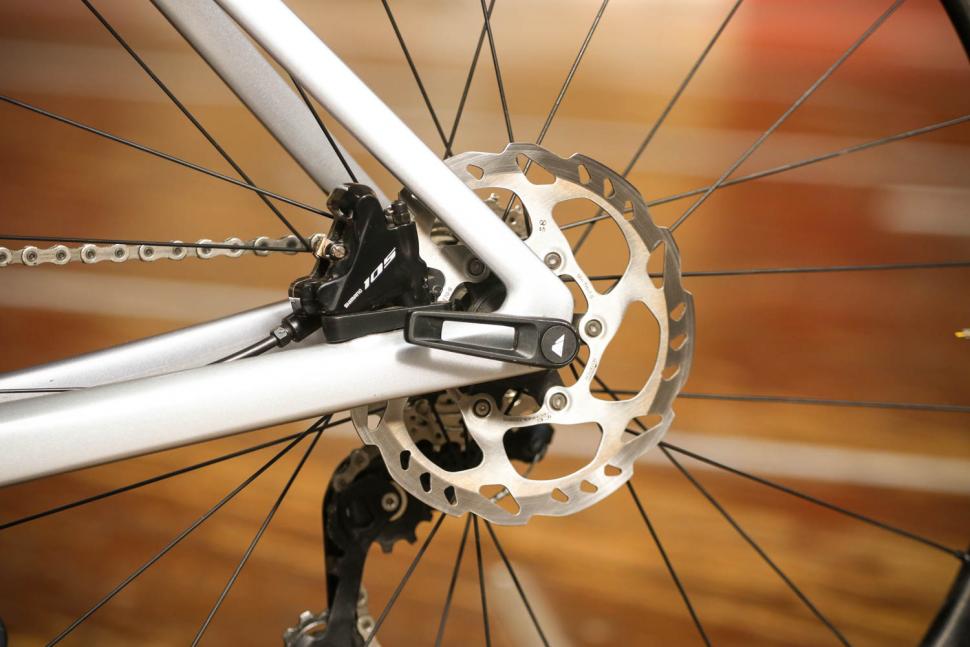 It's good that Canyon is offering the choice of rim or disc brakes and not forcing consumers onto discs, rim brakes are still a valid choice. When discs first arrived armchair experts worried about the drag they produced over rim brakes, but it's a concern we don't hear about as much these days.  Maybe because the benefits outweigh any marginal difference? Canyon says the disc brakes increase drag by 1 watt compared with the rim brake in its wind tunnel testing. 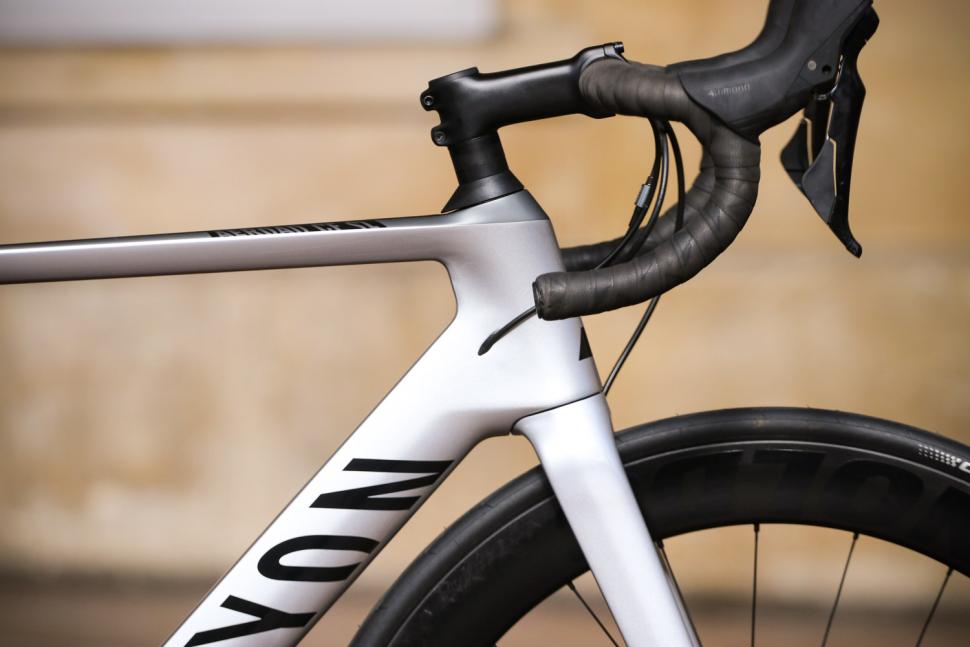 It’s a seriously good looking bike and fooled many people on Instagram into thinking it was a lot more expensive than it actually is. The Shimano 105 groupset is not to be sniffed at, offering as it does exceptional shift performance with super power but easily modulated hydraulic disc brakes. A semi-compact 52/36t chainset and 11-30t gives an accessible range of gears and will suit budding privateer racers. 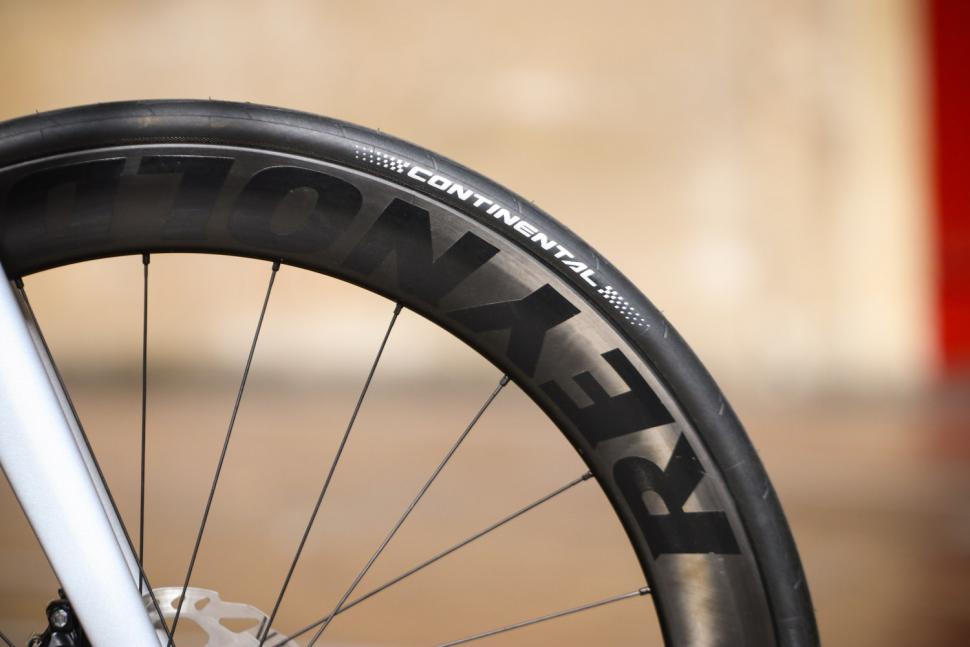 Helping to enhance the overall aero performance of the bike is a pair of Reynolds AR carbon fibre clincher wheels, combining a 58mm deep rim at the front with a 62mm deep rear wheel. They’re shod with Continental Grand Prix Attack and Force III tyres in a 25mm width. 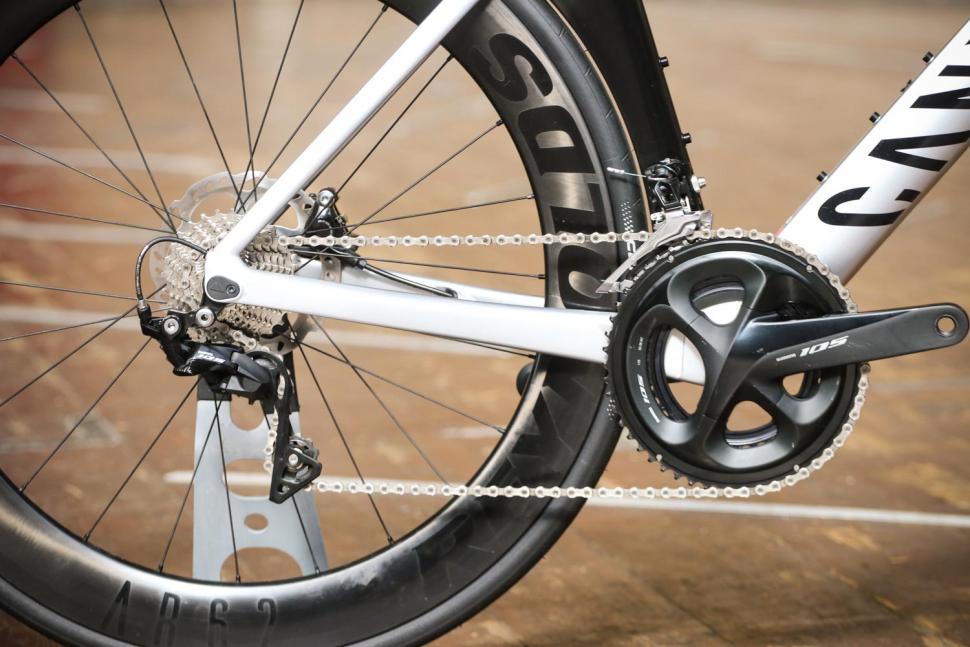 More on the wheels, because they are a real highlight - you don’t normally expect to get a £1,100 carbon wheelset on a bike at this price. The rim is made from carbon fibre and is compatible with regular clincher tyres, but they aren’t tubeless-ready which might be a shame depending on your view of tubeless.

The rims are fashionably wide, measuring 28mm externally and 19mm internally, which is claimed to provide good stability in crosswinds and works better with wide tyres. Sapim Spring spokes and brass nipples bring the rims together wither aluminium hubs with a 10-degree engagement freehub compatible with Shimano and SRAM cassettes. 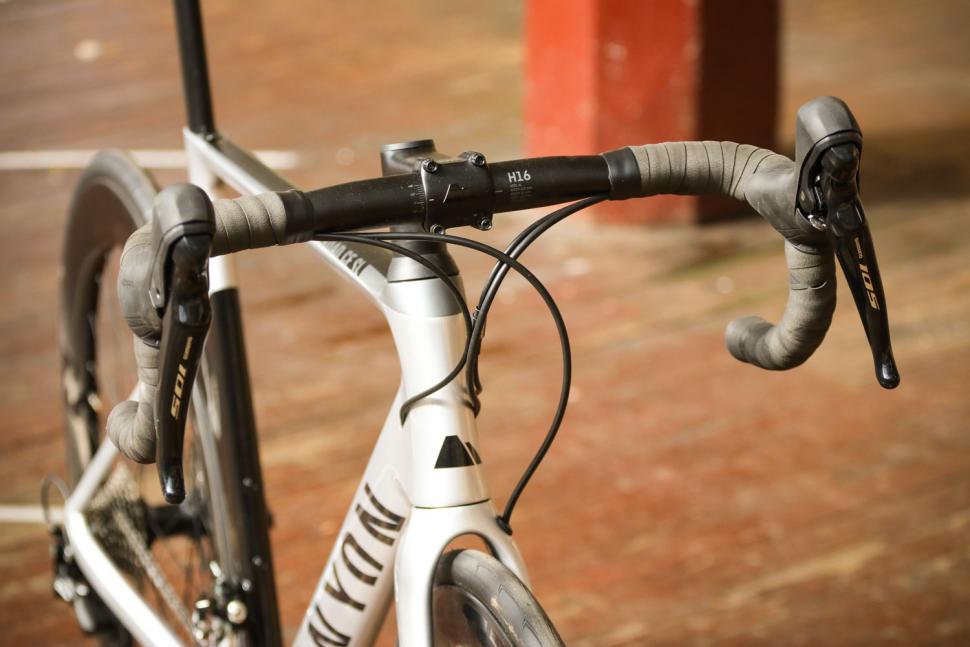 Instead of the expensive, and fit restricting one-piece carbon aero handlebar higher up the Aeroad range, this model gets a conventional aluminium handlebar and stem. It’s the company’s H16 Aero aluminium handlebar with a short 70mm reach and 41cm width on this size medium test bike - handlebar width and stem lengths are frame size-specific. The aluminium stem is 100mm long. An S27 Aero carbon fibre seatpost, held in place via an internal seat clamp, is topped with a Fizik Arione saddle with maganese rails. 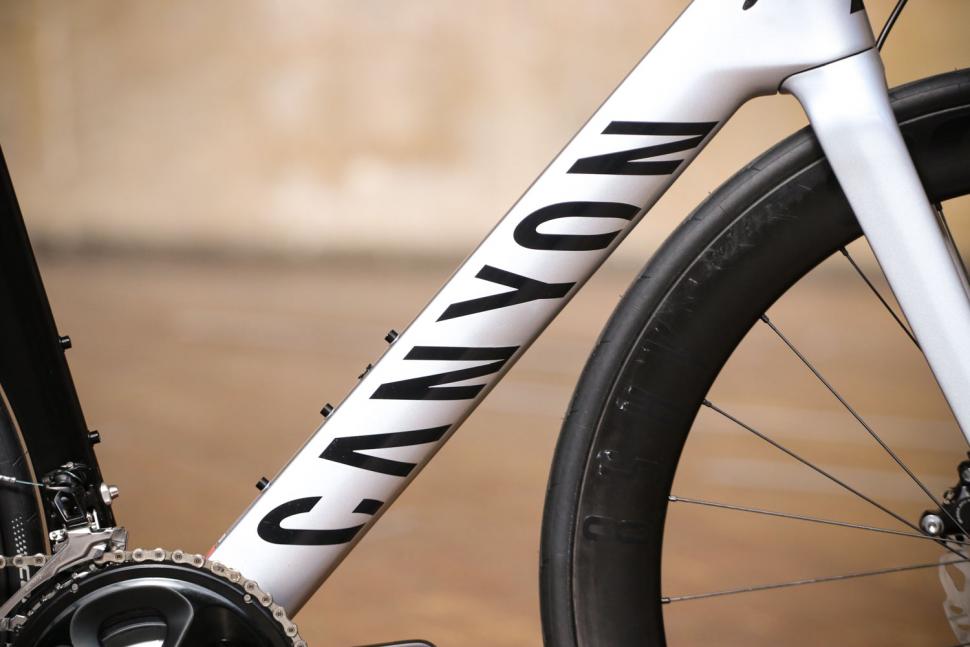 We've been impressed with the Aeroad CF SLX. "With its Trident 2.0 tube profiles (essentially a cut-off aerofoil, Kamm tail shape) and skinny head tube and fork blades, the Aeroad is a fast bike. It requires less effort to ride fast than regular road bikes. Even without a wind tunnel at hand, it's clear out on the road that it's an aerodynamically efficient bike," is just a snippet from the full review you can read here.

To put the price of this Canyon in perspective, the cheapest Trek Madone with disc brakes costs £7,550 and the most affordable Specialized S-Works Venge is £6,500. A Scott Foil 20 Disc will set you back £3,199. Perhaps the closest in terms of price is Giant’s Propel Advanced 2 Disc costing £2,299 which actually undercuts the Canyon, offering as it does a Shimano 105 groupset with carbon fibre wheels.

Will the new bike be as good? Stay tuned for a full review soon. More at www.canyon.com