One of the standout bikes from last year’s London Bike Show was a prototype carbon fibre road bike with integrated mudguards. It was the creation of Stebles Bikes and really turned some heads, and it’s now available to buy, with preorders for the bold bike currently being taken.

It’ll be on display at the London Bike Show - along with these six stunning road bikes - but here’s a quick first look.

The bike is made entirely from carbon fibre and manufactured in the UK, a rare thing indeed. Stebles founder Mark Stebles has teamed up with an F1 designer to create the bike and make his dream a reality. There have been various attempts at establishing carbon manufacturing here in the UK, with Hope and Filament probably the two best examples right now, and it’s definitely exciting to see another name to add to this short list. What really sets the bike apart is the integrated mudguard front and rear (or fenders for our American readers) that are moulded into the frame and fork. The mudguards blend seamlessly into the frame, with a pair of supporting struts sprouting off the fork and a single pair on the rear mudguard. Stebles says the mudguards exhibit no flex or rattle since they’re a rigid component of the frame and fork.

The mudguards have deeper sides, especially around the rear wheel where there’s almost a complete fairing, and that’s intended to prevent spray coming off the tyres. “The unique design of frame and forks covers the wheels to protect the rider from tyre spray while shielding the most vulnerable part of the chain where it picks up the most debris from tyre spray. The cover shapes form a structural frame to support the wheels eliminating the need for a traditional tubular frame,” says Mark Stebles. 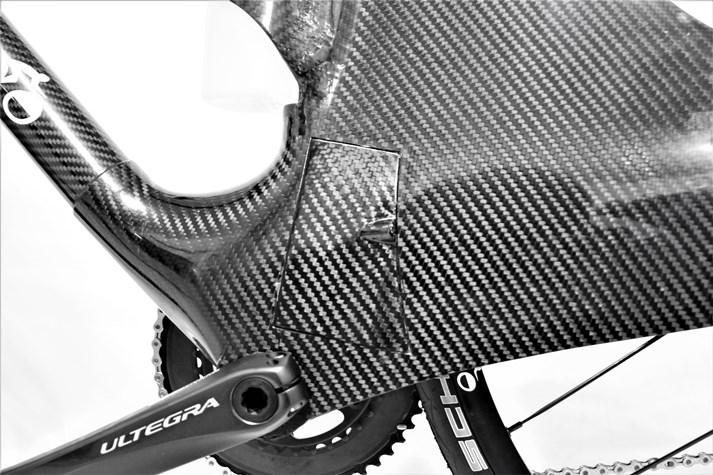 One cunning feature is a small door above the bottom bracket that can be used to store a minipump, spare tube, CO2 canister and other ride essentials. It’s similar to the SwatBox on Specialized mountain bikes, which have a trapdoor in the large carbon fibre downtube for storing kit just like this. I've never seen it on a road bike before though.

The bike is designed around 28mm tyres with disc brakes, and all cables are internally routed. Reflective frame decals help you to stand out at night.

The bike will cost £5,999.97 and it’s currently taking pre-orders for £99.99. Complete bikes will be built with Shimano Ultegra 11-speed mechanical groupsets and brakes with Hunt Aero Disc wheels. Customised builds will be available. Each bike will come with a custom bike stand, so no leaning it against the wall in storage. A five-year unlimited servicing plan at markscyclesrepairs.com is including with each bike.

I can’t recall seeing anything like this before, but do correct me if it has been done before. If you're heading to the London Bike Show be sure to check it out and see what you think of it.