Once known primarily for its saddles, Italian company Fizik successfully branched out with a range of high-end road shoes several years ago, and for 2018 it has completely overhauled the range with some brand new tech and a new naming convention. There are new saddles as well with the added option of pressure reducing holes and channels.

Fizik first launched a range of shoes in 2010, and the range has evolved hugely in that time. Remember the original R1s made from kangaroo leather with sail cloth straps?  In the pursuit for better performance and comfort, Fizik has been pretty aggressive in its redesign of its shoes over the years, and there’s little to link these latest shoes back to those originals.

And it’s all change for 2018. The previous top-end R1B has been replaced by the all-new Infinito R1. The R1B Uomo shoes introduced in 2016 ushered in a new closure design with a large pullover flap and two Boa dials, the lower with a single zigzagged wire anchored at one end. 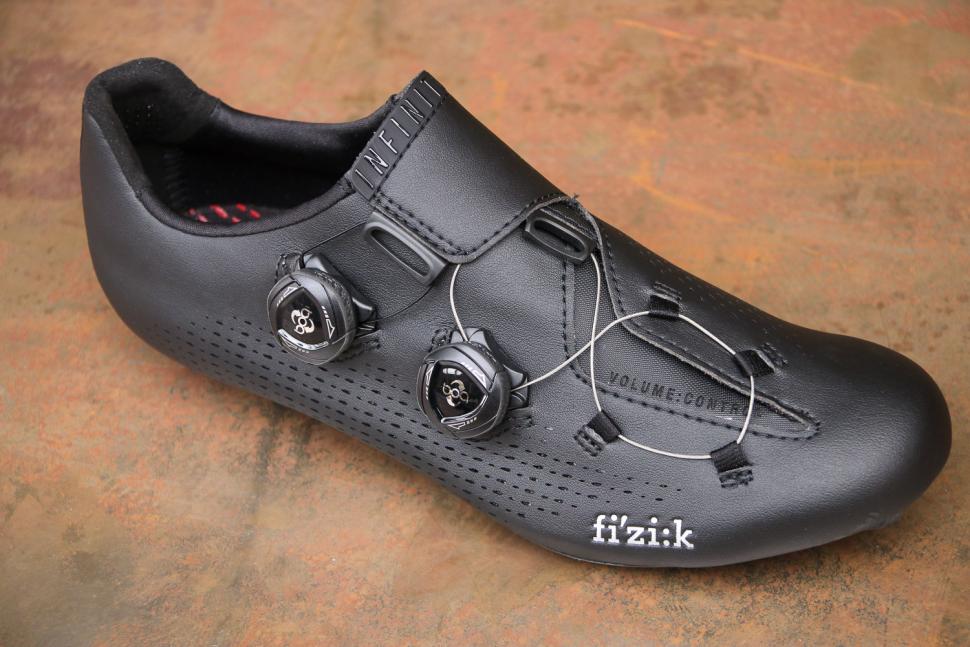 The new Infinito R1 has evolved the closure system. The new shoes retain the dual Boa dials and the lower one still pulls a single wire, but it now covers a larger part of the shoe with more anchor points. The idea is to provide better volume control for an improved fit. The cover flap is now half the size of the previous shoes. There are two versions of the Infinito R1 available to buy. The regular uses the same Microtex upper material as the previous shoes and with a view on hot rides and mountain climbs, a new knitted version has been developed. Knitted shoes have become a thing in the wider sports world (and Giro has produced knitted shoes this season) and Fizik has developed these as a  climber’s shoe where the improved breathability of the knitted fabric reduces heat buildup. What's the point of the knitted material? It's used in key places to aid breathability and it’s also said to improve the comfort of the fit due to its higher flexibility. The knitted fabric has been treated with a water repellant finish to provide resistance to bad weather. 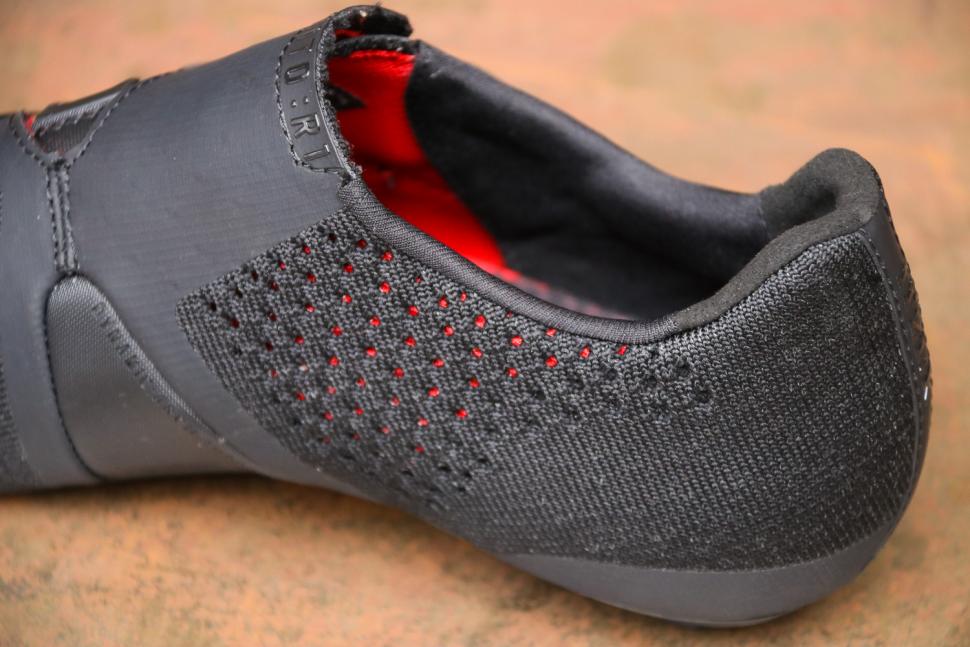 A new feature on the Infinito R1 and we saw it on the regular and knitted shoes is revamped arch support. On the inside of the shoe is a panel of a material called Dynamic Arch Support that is connected to the top flap and Boa dial. 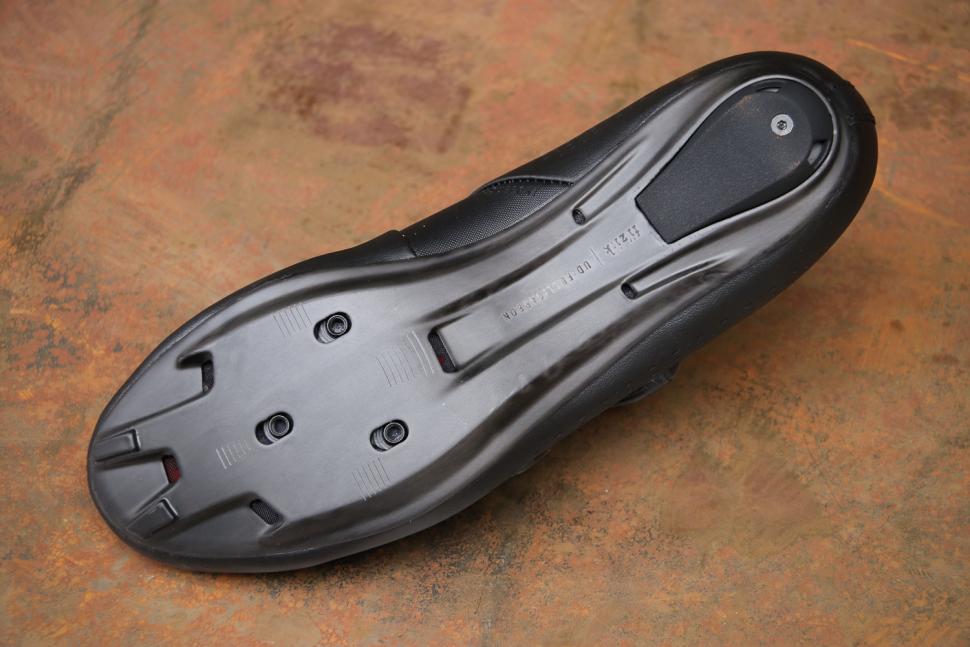 There’s still a full carbon fibre sole but there are now more vents at the front and back, and in the middle of the sole, to improve cooling in hot weather. The sole is drilled for 3-bolt cleats and there are plenty of markers for accurately lining them up. A replaceable heel bumper aids walking. Hopefully, it has addressed the slight comfort issues I had with those shoes. I will find out once I get to test them. This here is the new Aria R3, Fizik’s revamped mid-range shoe. The upper design is similar to the previous generation R1B shoes with two Boa dials, the lower one pulling a single anchored wire, but the cover flap has been revised to improve the fit. A carbon fibre sole has fewer vents than the R1 and there’s the standard 3-bolt cleat drilling. The price and the choice of five fetching colour combinations (including a pink and yellow fluoro option) help this shoe stand out in the range. With an eye on the rapidly approaching winter, Fizik has launched its first winter boot. Called the Artica R5 (and available with a mountain bike sole called the Artica X5) has a fleecy inner shoe with a simple draw-cord closure system - Fizik calls it Speed Lacing - and a fully waterproof outer, with a centrally aligned zip and velcro ankle strap. Fizik has worked hard on developing a shoe that is fully waterproof and insulating, but breathable enough to prevent overheating in milder weather. The upper interestingly features an aluminium foil underside to boost the insulation properties. 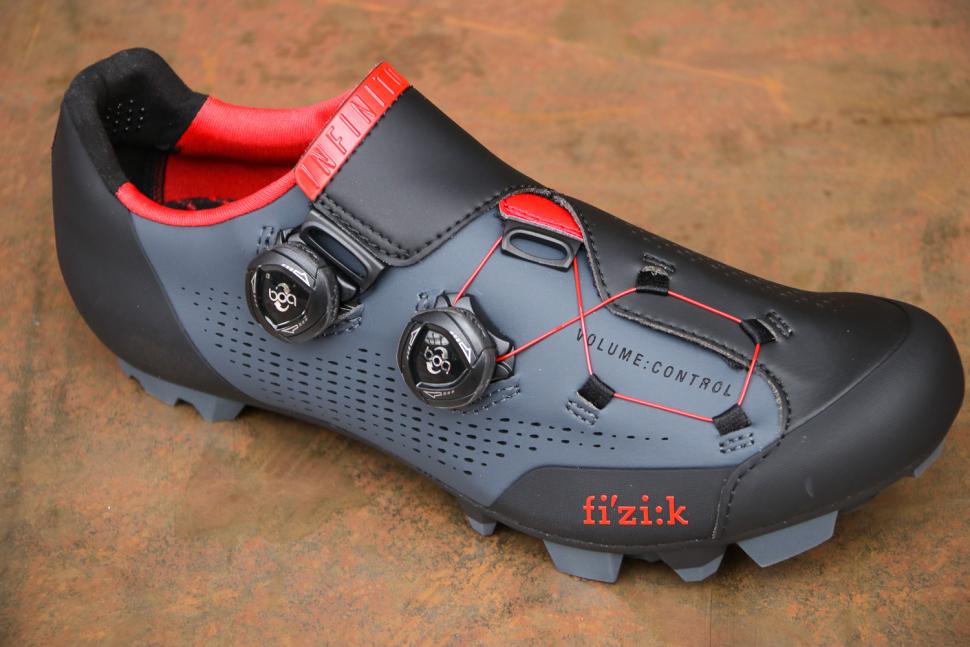 The Infinito X1 is a mountain bike version of the Infinito R1, and uses exactly the same upper but bonded to an aggressive looking sole with a two-bolt cleat drilling, with the option to add two studs making them ideal for cyclocross. 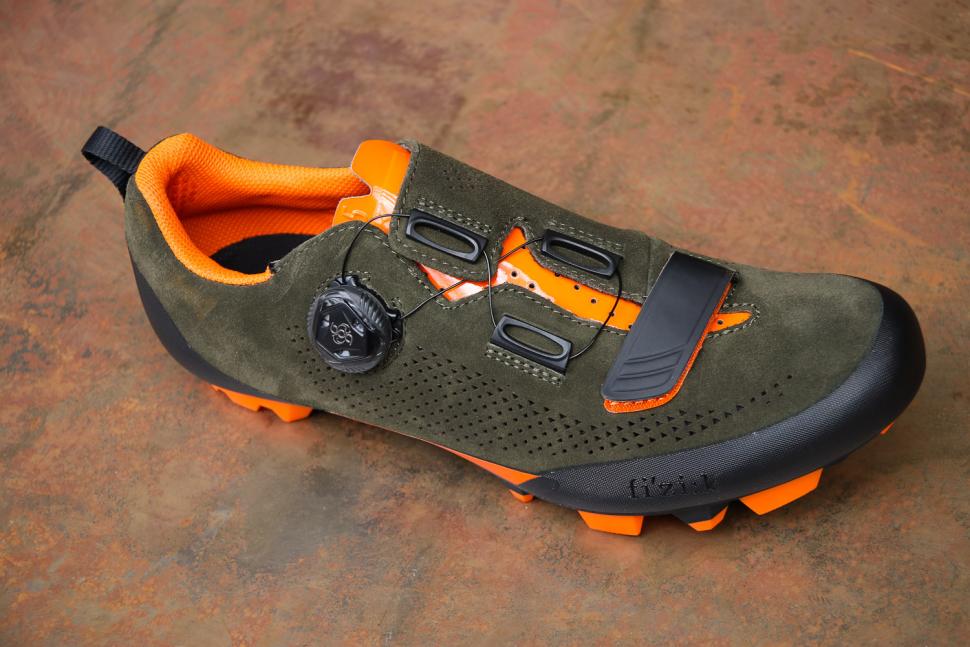 This is the all-new Terra X5, which in this optional military green suede with fluoro orange highlights is probably the best looking new shoe I’ve seen in a while. What do you think? It’s also available with a regular synthetic upper if you’re worried about how well that suede will stand up to British winter conditions. 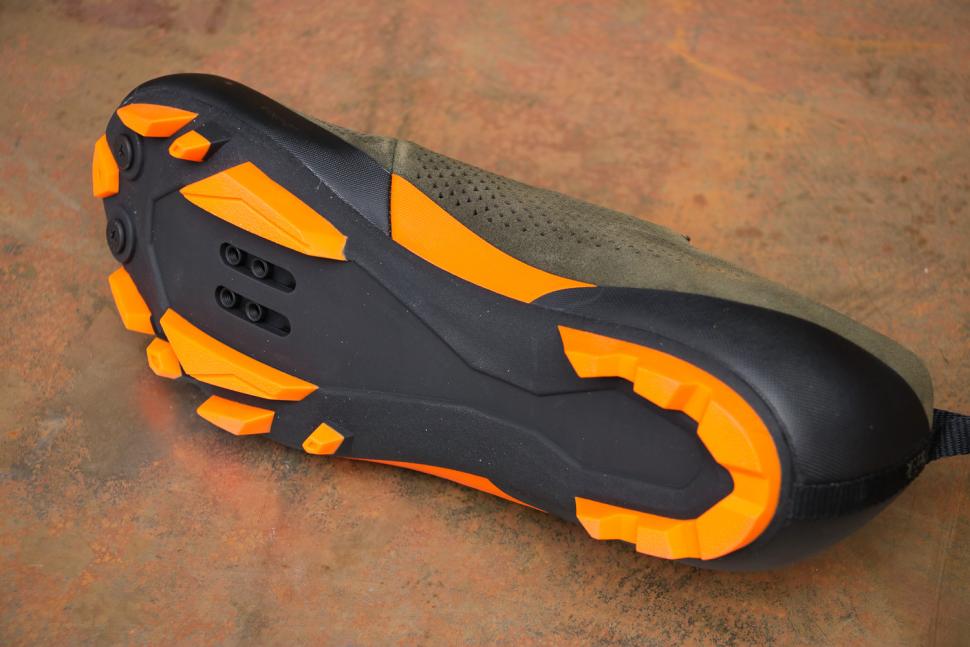 The Terra X5 uses a simpler upper with just a single Boa dial at the top of the shoe, pulling a single wire around the mid part of the upper. A solitary Velcro strap adjusts the volume of the front of the shoe and is a set-and-forget thing as with most shoes that use a single Velcro strap. Underneath is a composite carbon fibre sole with vents and a two-bolt cleat drilling and stud mounts. The addition of heel loops makes for easier carrying post-ride.

Here are the weights (on road.cc scales for size 42) and prices for the new shoes:

New saddles aimed at those who like holes and channels

But that’s not all, Fizik has new saddles out for 2018 as well. There’s no change to its Spine Concept and its trio of Arione, Aliante and Antares saddle models, but it has responded to what it says is demand for holes and channels.

There’s a lot of science out there about the optimum saddle shape and design, some of it conflicting, while Fizik has conducted plenty of its own research over the years (the Arione was groundbreaking when it first launched in 2002) but there’s still a lot of personal preference when it comes to choosing a saddle. And for some, a pressure reducing channel or hole down the middle is absolutely necessary. So introducing the Open (hole) and Versus Evo (channel) to the Fizik range, and these options are available on all the saddle models, so plenty of choices to get the right fit for you. That's the Versus Evo on an Aliante above. The new Versus Evo is, as the name suggests, an evolution of the previous Versus channel design, but it has completely changed the way it makes the saddle. Clearly taking influence from Fabric saddles, the saddle is now made of two parts, a plastic base with the padding bonded in place. It’s a striking looking saddle, certainly not as elegant as we’re used to from the stylish company, but there’s an advantage in the way the plastic base flexes, providing more seated comfort, and it’s lighter than the previous Versus saddles. The Open aims to offer the same support and shape as the regular saddles but with a small hole in the middle. But Fizik has redesigned the base and upper to ensure it offers the same stiffness as the previous saddle, so there’s no compromise to taking out the centre. Here it is on a top-end Arione R1 with carbon rails. The range will cover the full gamut of options, from the £180 Arione R1 Versus Evo Regular to £160 for the Aliante R1 Open Large and Antares R3 Open Large for £130. We weighed an Aliante R3 Versus Evo K:ium at 229g and an Arione R1 Open Carbon Braided at 199g.

Watch out for reviews of these new saddles and shoes soon, with availability expected in October. More at www.fizik.com