Giant has finally released details of the Propel Disc aero road bikes that we first saw raced in this year’s Tour de France, claiming that the flagship model, the Propel Advanced SL Disc, has the highest stiffness-to-weight ratio of any bike in its class and a lower drag coefficient at a wider range of yaw angles than its non-disc-brake predecessor.

Rim brake versions of the Propel have been in the Giant line-up for years but this is the first time that disc brakes have been added. “To best simulate actual riding conditions, we created a dynamic mannequin,” says Giant. “This allows us to more accurately replicate real-world riding forces and conditions without the variables that are intrinsic to testing with human riders. Some other brands use a static mannequin, but our dynamic one more accurately reveals the aerodynamic effects of a rider while pedalling.

“We used a 24mph windspeed in a temperature and humidity controlled environment, with yaw angles ranging from 0 to 30 degrees. With the dynamic mannequin, spinning wheels and moving drivetrain, we were able to produce the most real world aerodynamic analysis possible. Our process is an industry first. It helped us sculpt the design of the new Propel Disc range and fine-tune an overall system that considers the aerodynamic forces of rider and bike together.” The new range features new frame profiles and an integrated disc-brake design, and there’s also a new combined aero handlebar and stem with internal cable routing, and aero wheelsets with different rim depths front and rear, the idea being to reduce drag without compromising control or power transmission.

Giant claims that the Propel Advanced SL Disc has the highest stiffness-to-weight ratio of any bike in its class, and says that wind-tunnel tests reveal the Propel Disc bikes have lower drag coefficients at a wider range of yaw angles than their rim brake predecessors.

“One of the key breakthroughs is a new truncated ellipse airfoil shape – a design that lowers drag at a wider range of wind angles than traditional teardrop frame tubing,” says Giant. “Engineers also found that, with proper integration, a disc-brake design can actually improve aero performance compared to rim-brake configurations.” That’s a significant claim in that one of the arguments often put forward against disc brakes is that they increase drag.

“This is because the location of traditional callipers (either in front or behind the fork crown/ legs) creates 'dirty' air,” says Giant. “Opening up the fork crown area (by placing the disc-brake callipers down at the hub) means that the air hitting the new disc-brake calliper has already been disrupted by the leading edge of the tyre/wheel. This effect is further enhanced by an asymmetric fork that helps smooth out airflow over the calliper.”

The frame is engineered for Flat Mount disc-brakes and is thru axle front and rear.

Check out our review of the rim brake Giant Propel Advanced 1.

The Propel Disc range features new component tech including an “integrated Giant WheelSystem” where the rear wheel has a 65mm deep rear rim for aero efficiency and power transmission while the front wheel has a shallower 42mm rim for improved crosswind stability.

“The result is a bike that not only accelerates and slices through wind faster, but also corners with greater precision and handles better in all types of racing situations,” says Giant. 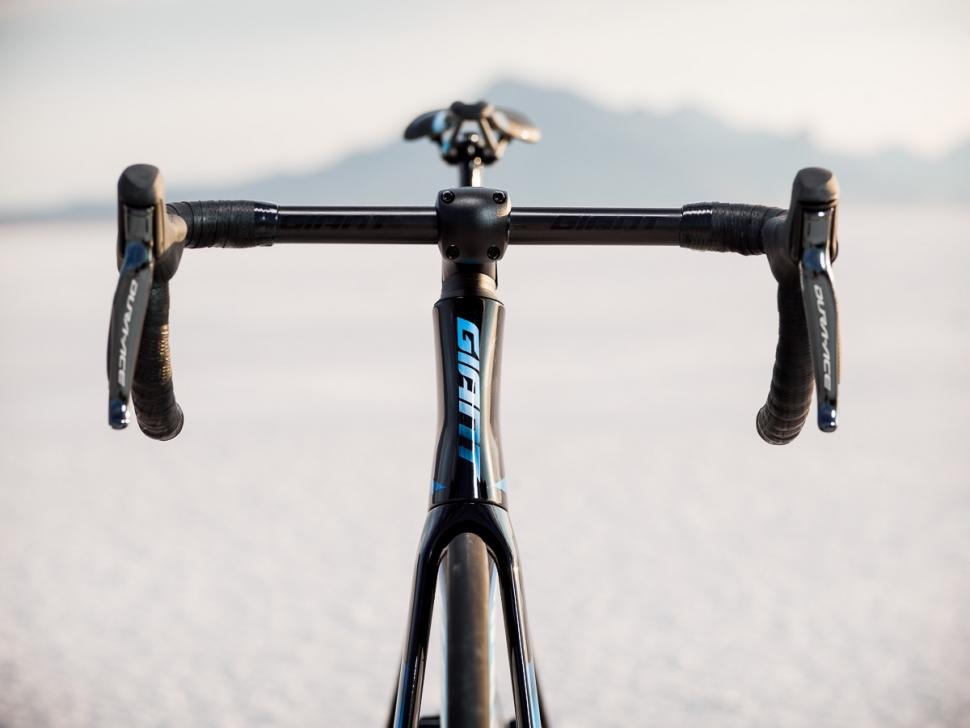 Giant says that it could easily have got better aero figures by sacrificing stiffness or light weight but it wanted to keep a large head tube, down tube and bottom bracket area to maintain the bike’s efficiency and handling characteristics. The Propel Advanced Disc series bikes, also made of Advanced-grade composite, are the least expensive but Giant says that they’re still among the lightest in their category.

For more information, go to www.giant-bicycles.com/PropelDisc