Wilier’s new Cento10NDR endurance road bike features what’s called an ‘Actiflex’ system on the rear triangle with stays that flex, a pivot at the top of the seatstays and an elastomer shock damper, the idea being to add comfort over rough surfaces. It can also be set up with either disc brakes or rim brakes.

Second things second: riders of a certain age have a Pavlovian response to the word ‘elastomer’. We can’t stop ourselves from automatically saying ‘Girvin Flexstem’, and not in a good way. Wilier doesn’t think we need to make any comparisons there. We’ll come to how Actiflex works in a mo. 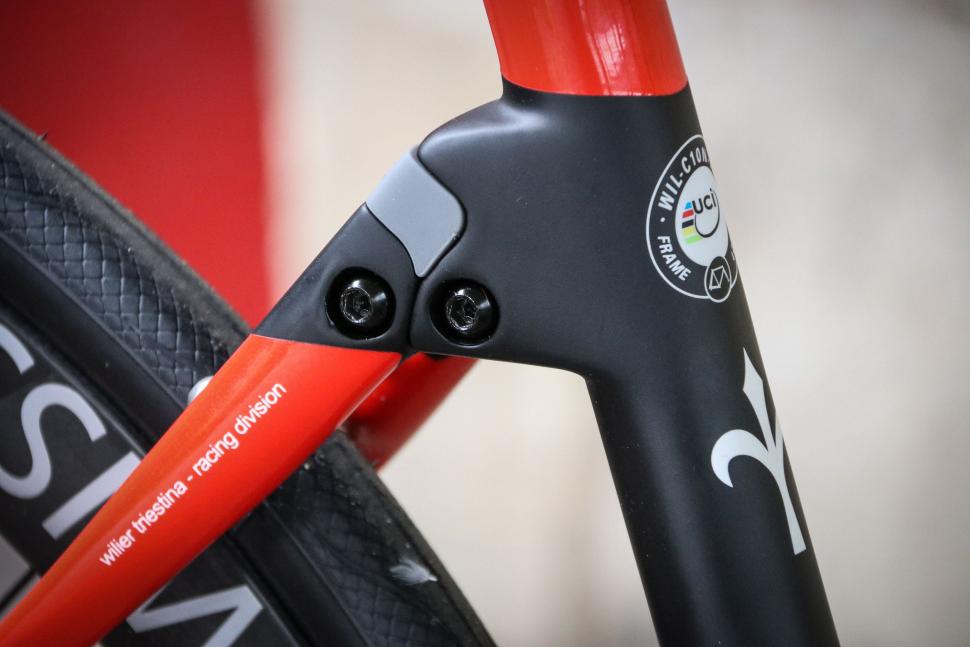 Third things third: the Cento10NDR is not a gravel bike, it’s an endurance road bike. Wilier says it’s perfect for cobbles but it’s designed with asphalt in mind.

The Actiflex system, which includes a specific geometry and carbon layup as well as the linkage system mentioned above, is intended to provide a few millimetres of rear wheel travel in order to isolate the rider from the ground and add comfort.

The chainstays are bonded to the bottom bracket shell in the usual way, the Actiflex system relying, as the name suggests, on flex in the stays in order to work. One of the key features is a pivoting alloy link between the seatstays and the seat tube. It is held by locking bolts and moves on bushings. It’s made as a sturdy single block so as to resist sideways movement.

Vertical movement is controlled by a shock absorber that’s made from a technopolymer that, Wilier says, has very good resistance to weathering (Sunn mountain bikes, for example, used to have a vaguely similar system that relied on flex in the stays although it didn’t have a similar alloy link).

A picture paints a thousand words… 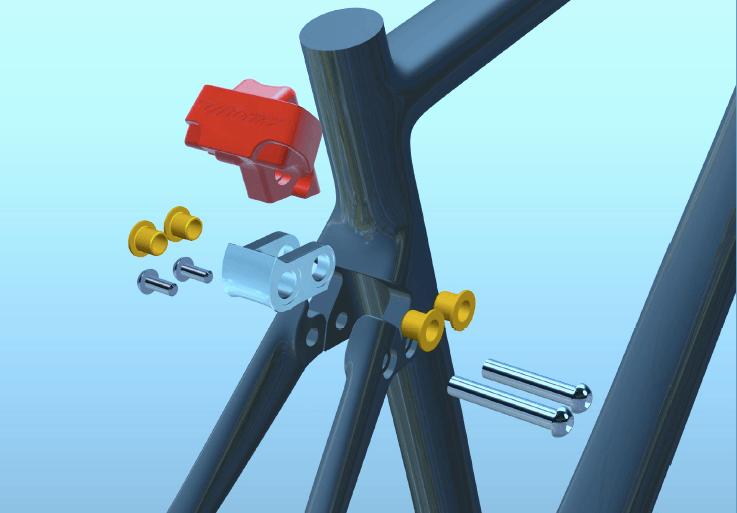 One thing that most people know about the elastomers used in early mountain bike suspension is that temperature could affect their performance. Wilier says that materials science has come on a long way since then and that the polymer it uses works properly from -40°C to 150°C, easily covering all riding conditions.

The whole Actiflex system is small, not much larger than the standard seatstay/ seat tube junction of some bikes, and not especially noticeable at first glance. The idea, of course, is that the amount of movement at the saddle caused by irregularities in the road surface is reduced. 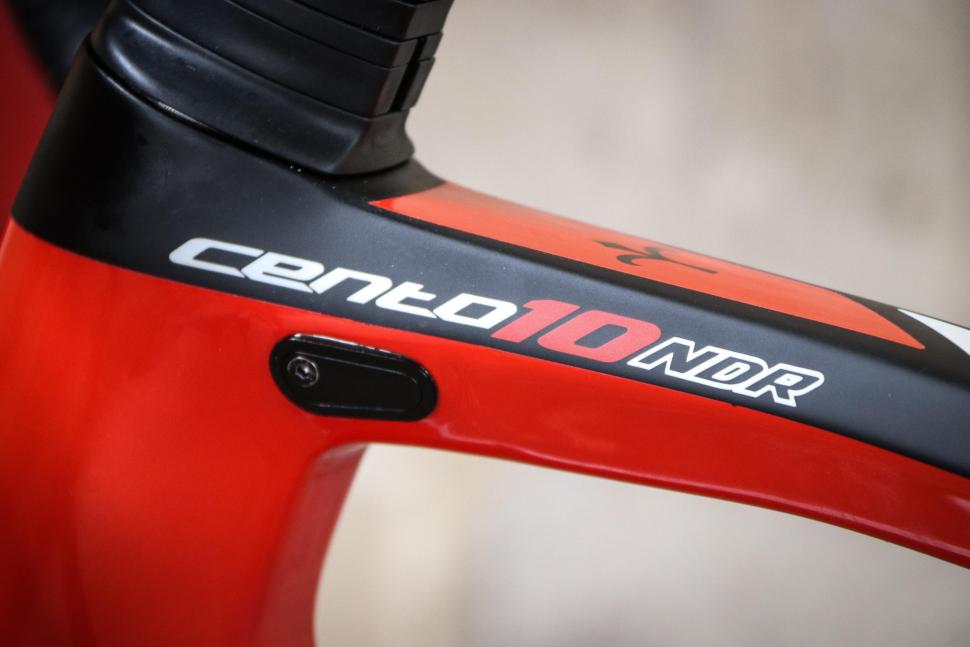 Although it doesn’t mention the Trek Domane directly (we’re reading between the lines here), Wilier reckons that its Actiflex system results in less horizontal movement of the saddle than that particular system, and although it doesn’t mention the Pinarello Dogma K8-S, it believes that the Actiflex’s alloy pivot means less lateral movement than you get with that design.

Obvious question: does it add much weight? Apparently not. Wilier claims a frame weight of 1,080g (size medium).

Obvious next question: does it work? The guys from Wilier visited road.cc HQ yesterday to show us around the Cento10NDR but we weren’t able to ride it so we can’t give you first hand information on that. We’re trying to get one in for review.

The Cento10NDR isn’t just about the Actiflex, it’s also notable for being compatible with both direct mount rim brakes and flat mount disc brakes, so if you later change your mind about what you want you can swap between them. The redundant mounting holes will be filled with colour matched bolts/bungs on final versions of the bike so they’re less noticeable. 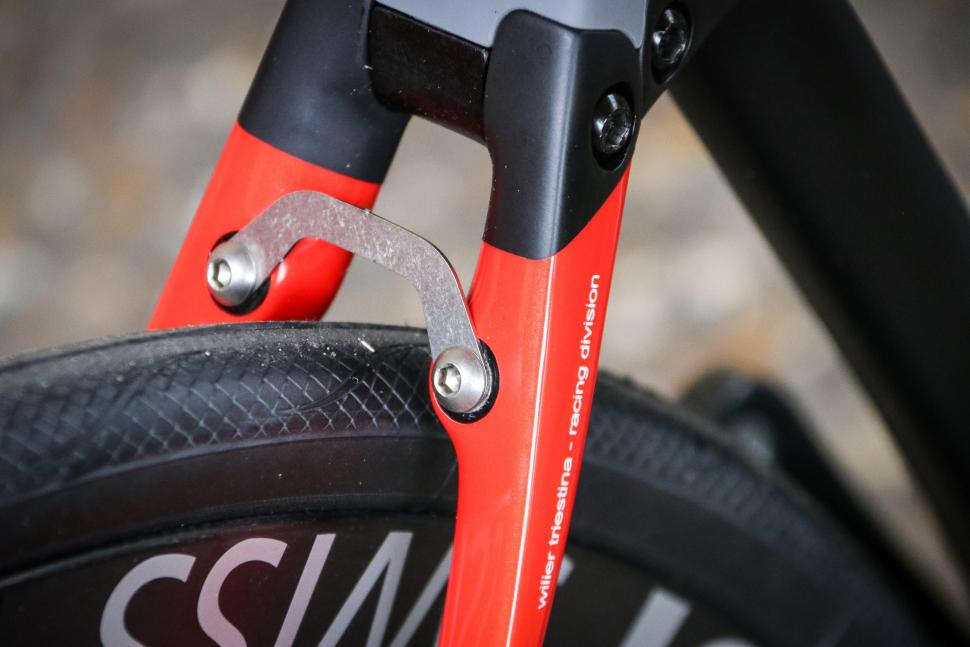 If you go for disc brakes a brace plate is fitted to the rim brake mounts. It’ll be carbon-fibre on production versions of the bike. 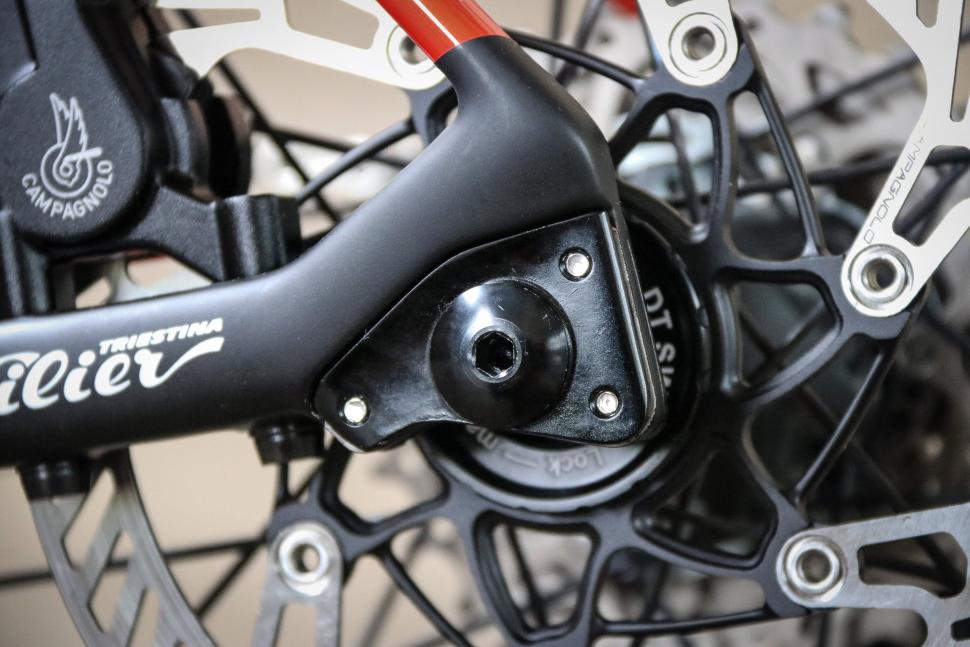 The dropouts of both the frame and fork are replaceable so you can run the bike with standard quick release skewers or 142 x 12mm thru axles.

The Cento10NDR has Kamm tail frame tubes profiles based on NACA aero sections that are close in shape to those of the existing Cento10Air. The fork uses the same aero profile. 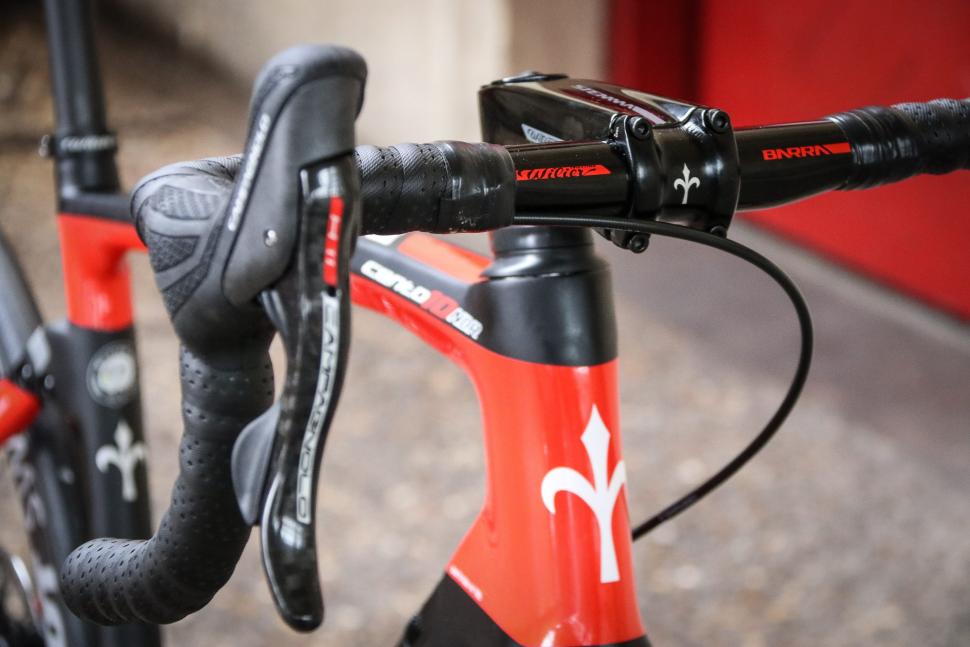 Like that bike, the Cento10NDR has the option of cable routing inside Wilier’s own handlebar and stem and from there into the frame and fork via the head tube. If you have an electronic groupset with disc brakes there will be no external cables whatsoever. The down tube incorporates the same integrated cable plate that allows the use of any groupset, mechanical or electronic. Here it’s set up with a barrel adjuster for the mechanical front derailleur.

You get enough clearance for 32mm tyres if the Cento10NDR is set up with disc brakes or 28mm tyres if you go for direct mount rim brakes (it’s the brake callipers rather than the frame that become the limiting factor here). 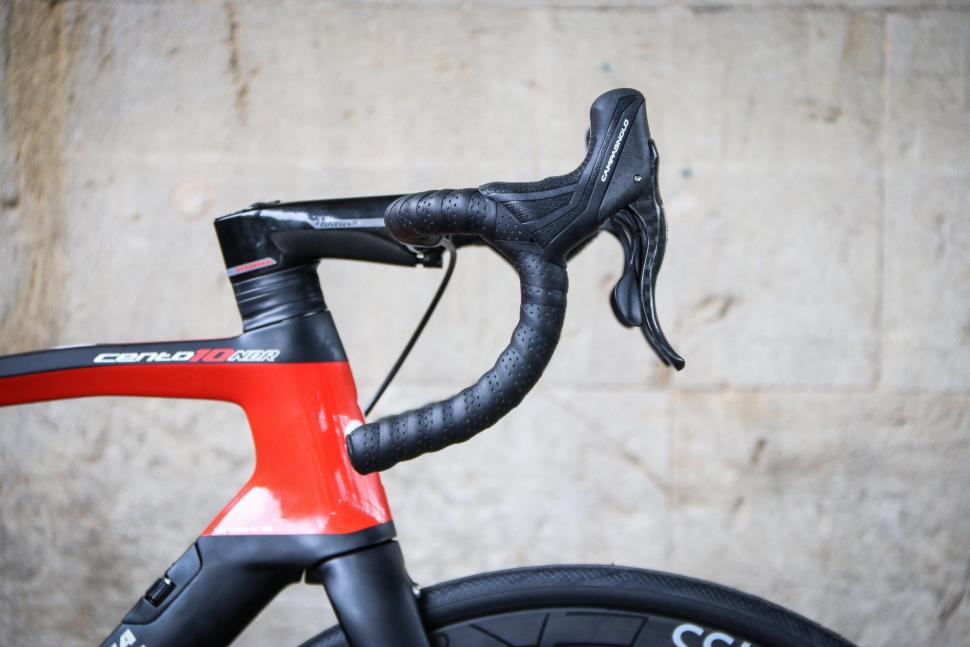 The Cento10NDR is built with tube dimensions and wall thicknesses that are specific to the frame size. The intention is that riders of all sizes will get the same feel.

The geometry of the Cento10NDR makes for a more upright riding position than you get on Wilier’s race bikes like the Zero .7 and Cento10Air. To take the medium sized frame as an example, you get a seat tube of 51cm, a top tube of 54.7cm and a head tube of 15.7cm. The head angle is a little slacker than normal at 72°, the stack height is 566mm and the reach is 379mm. 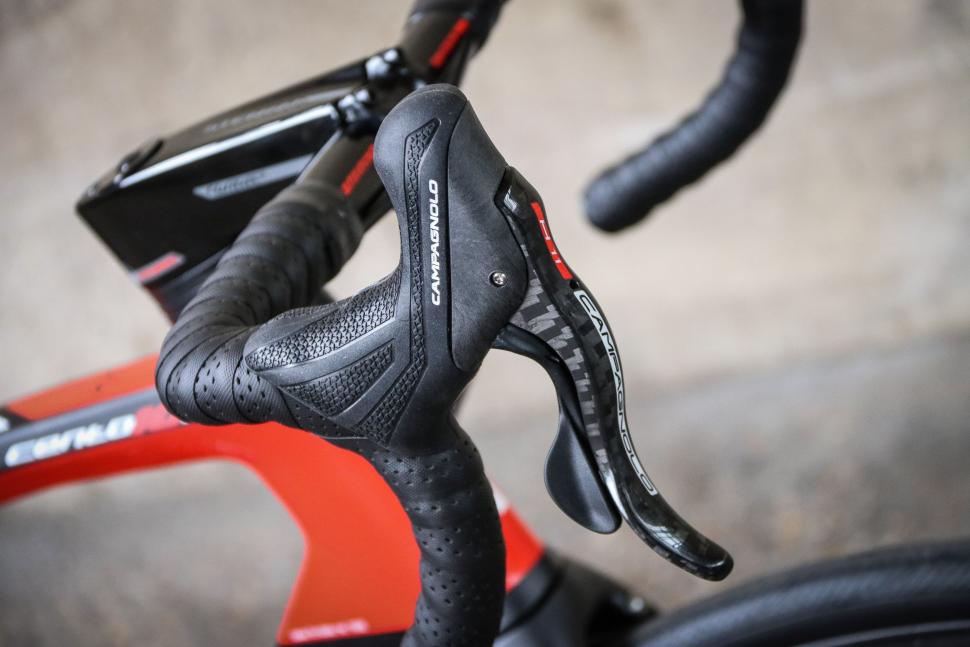 The Stemma stem, which runs parallel to the ground to keep the frontal area as low as possible, is available in 90mm, 100mm, 110mm and 120mm lengths while the Barra handlebar comes in 40cm, 42cm and 44cm widths.

Prices have yet to be finalised.