Cervelo's new R5 is stiffer, more aero and comfortable, and is available with disc brakes

We spotted it at the Strade Bianche, and today Cervélo has unveiled its brand new R5, which for the first time will be available with disc brakes, which joins the growing number of race bikes equipped with discs.

The R5 really needs no introduction. It’s been the company’s lightest race-ready bike since it was launched in 2013. Where the S-series is focused on aerodynamics and the newer C-series on endurance comfort, the R-series has always been about being the lightest, providing the best all-round balance of weight, stiffness and handling. Weight, or rather lack of it, has always been one of the R5s trump cards. For this new model, Cervélo hasn’t actually chased a lower weight figure, instead opting to focus on optimising the stiffness to weight ratio. That’s a similar story to what we’re hearing from other top bike brands as well.

Cervélo claims the new R5 rim brake model is 21% stiffer at the bottom bracket  and 13% at the head tube, while the R5 Disc is 18% and 26% stiffer respectively, though it must be pointed out Cervélo hasn’t produced an R5 Disc before now. 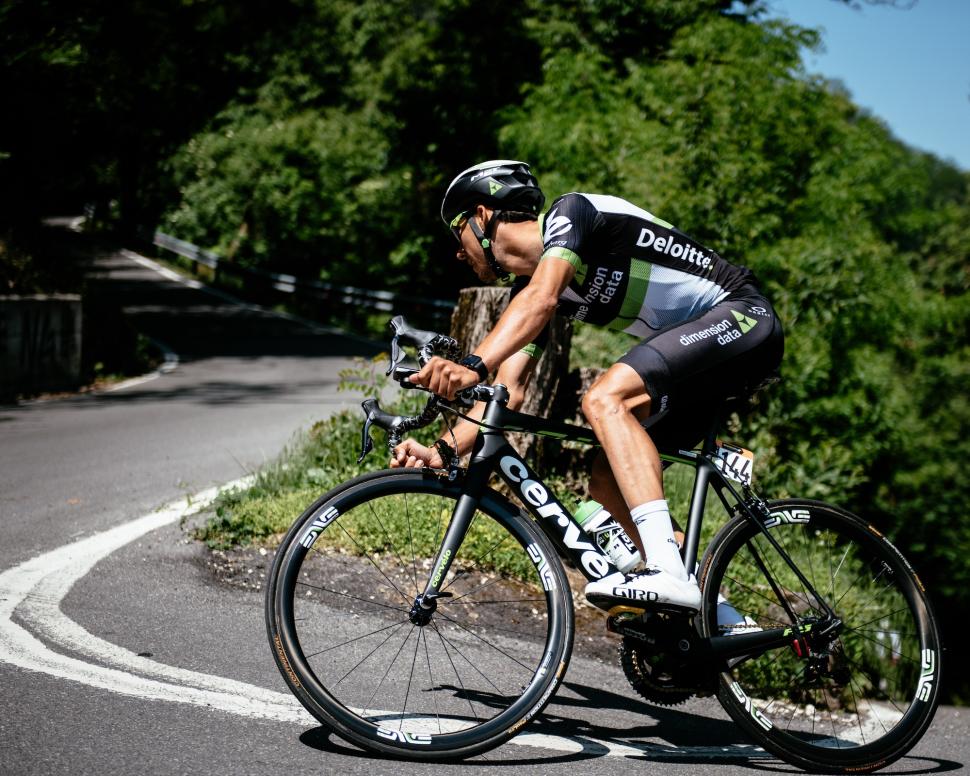 To achieve those figures, Cervélo has evolved its iconic Squoval tube shapes (rounded square tube profiles) with Squoval Max. Yup, that’s right, they’re taking it to the max! It has essentially refined each tube profile and found a 44g aero improvement whilst improving stiffness.

One of the big changes is a new Pro Fit geometry, a direct result from pro racer feedback. Those pros like the front-end slammed, so Cervélo has responded by decreasing the stack of the new R5. The new R5 is now 8mm lower at the front compared to the R3, while the reach is also 2mm longer.

R Series - Till The End from Cervélo on Vimeo.

It’s also refined the geometry in other key areas to provide improved handling. It’s lowered the bottom bracket and developed a stiffer bottom bracket shell,  and lengthen the wheelbase, with 410mm chainstays and a 594mm front centre on a 56cm frame.

The new R5 is now available with disc brakes, and interestingly Cervélo has adopted the excellent RAT thru-axles from sister company Focus. Interesting because it chose not to use them for the C3 and C5 it launched last year. It has had a fettle with the thru-axles though, improving the adjuster nut and changed the spring, as you can see in the rather nifty fly through video below.

Another big change is the increase in tyre clearance. The old R5 could only take a 25mm tyre, the new model ups that to 28mm, so cyclists that want to embrace comfort on a race bike can.

When Cervélo launched the new S5 a couple of years ago it introduced its own aero handlebar, and it’s only gone and developed an integrated handlebar and stem for the new R5. It allows electronic cables to be internally routed with easy computer mounting and accounts for a 30g aero saving according to the company’s claims. Other details include internal cable routing, with the entry point behind the head tube adopted from the S5. It’s also integrated the seat clamp into the top tube and used a D-shaped aero seatpost, not dissimilar to Giant's D-Fuse post, to reduce drag in this area whilst also upping the comfort factor.

Cervélo has also updated the R3 and we’ll cover that separately, but in short, it inherits the geometry from the previous R5 and also gets some stiffness and aerodynamic improvements.

UK prices when we get them, but here are the prices in Euros.

We’l have more details on teh new R5 and R3 soon, but for now we'll let Cervélo have the final say:

The R5 makes no compromises as a race machine first and foremost. World Tour riders praise its new pro fit, stable and responsive handling, and unrivalled stiffness and lightweight design. Bernie Eisel calls it “the perfect bike for stage racing,” and Omar Fraile demonstrated as much by winning Stage 11 of the 100th Giro d’Italia. Available with either disc or rim brakes, the R5 sets new benchmarks for performance, usability and confidence-boosting control.