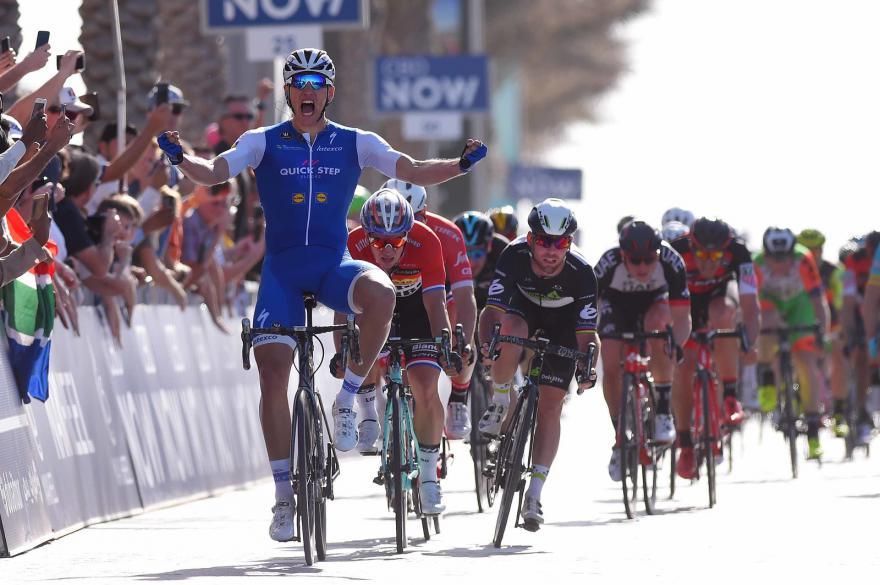 Marcel Kittel has got his 2017 season off to a flying start by winning the first stage of the Dubai Tour, in the process becoming the second pro to win a race on a disc-equipped race bike following Tom Boonen’s historic win last week.

Kittel announced he was going to race a disc-equipped bike before the race, saying: "What I can say from all the training sessions I did already in training camps now is that it's a very strong improvement. It improves a lot of your steering of your bike; you can handle it really well – so I think it's a good choice."

He was riding a Specialized Venge ViAS Disc, the same essentially as the bike Boonen used to win with a stage of the San Juan race in Argentina aboard last week. He had the same Shimano Di2 groupset with hydraulic disc brakes and deep section Roval wheels.

Kittel’s Venge is painted with the same silver design as the regular Venge he was racing at the Tour de France last year. The custom paint job was designed by Specialized’s Ron Jones, who drew inspiration from Marcel Kittel’s Harley Davidson motorbike, the team work which helps to deliver him into the final sprint in prime position to deliver his explosive speed, and a dose of science.

Of course, conspiracy theorists will just point out that Specialized has simply demanded that both Boonen and Kittel race bikes with disc brakes this season in order to sell more bikes, and that might be the case. But just maybe they have both ridden disc-equipped bikes in the off-season and liked them enough to confidently make the switch?

Obviously disc brakes didn’t contributed to Kittel winning a sprint stage in dry conditions on a stage that was far from demanding, but they certainly didn’t slow him down much either.

Kittel said after the race: “A lot of riders came to me today and asked me about that, they were curious about the disk brakes and how it feels to ride with it. I think I made the right choice and I’m happy to have it this season. The most important thing is that we came out on top today. Last year we won many races together, and that’s what we want to do also this season. The first race of the year is always insecure, because you can never know how things will work. All the guys were there today and did a great job, so this is also a victory of them.”

He had a tiny bit of help. Mark Cavendish punctured in the sprint for the line but kept riding anyway.