Michelin has launched a brand new tyre range called the Power, replacing the Pro4. There will be three versions and each is claimed to offer improved puncture protection, extra grip and lower rolling resistance than the tyre each replaces. Michelin proudly states that the tyres are the “fruit of Michelin’s extensive research and development know-how and features some of the Group’s very latest technological breakthroughs.” The French company tells us the new tyres have been extensively tested during the two-year development cycle, with a claimed 800 lab tests and over 200,000km of test riding by 200 cyclists around the world. Testing was conducted on specialist rigs and also at Michelin’s test track, using an electric bike and a brave test cyclist to monitor the grip level of the tyres through a bend. It also tested the tyres on a track covered with flint and sprinkled with water to test puncture resistance. 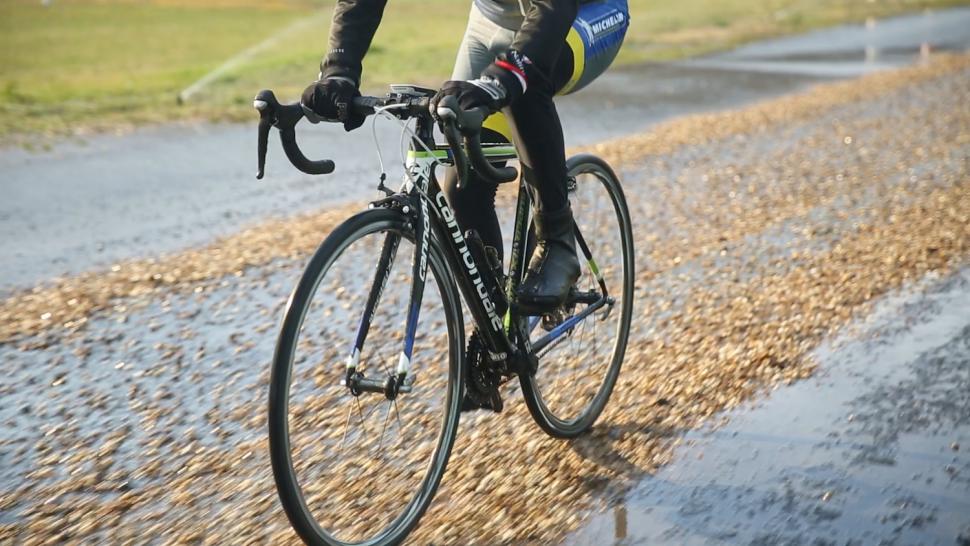 The rolling resistance tests for the data outlined below were conducted by Wheel Energy Laboratory in April 2015, an independent tyre testing company in Finland.

The range comprises three tyres consisting of the Power Competition, Power Endurance and Power All Season. Michelin is confident these three tyres cater for the needs of 90% of the cycle sport market. There’s a fourth model, the Power Protection+, but that’s only available in the US.

The names are pretty obvious really. The Competition is the fastest race option while the All Season focuses on grip and durability, the Endurance is for distance riding. The top-end Power Competition, available in 23 and 25mm widths and weighing 190 and 210g respectively, is claimed to produce 25% less rolling resistance than the previous Pro4 Service Course, with a 10 watt saving over 40km at 35kph. It also claims to have improved puncture protection with an aramid Protek belt underneath the tread. This is a tyre that is designed to be more robust and longer lasting, so ideal for training, with the  X-MILES Compound being more resistant to cuts. Michelin reckons it offers a 30% reduction in rolling resistance, equating to an 8.6 watt saving, compared to the outgoing Pro4 Endurance it replaces. Lastly, there's the new Power All Season, which replaces the Pro4 Grip tyre. It’s a bit heavier again, at 235g for the 23mm version, 270g for the 25mm and 295g for the widest 28mm option. The tyre has a lower thread per inch count of 60 tpi, with a Grip Compound rubber tread designed to function well in low temperatures.

It sounds like a good winter tyre, as it is also claimed to increase traction in wet and slippery conditions. Grip is actually claimed to be up by 15% compared to the tyre it replaces while it offers a 5 watt saving.

The tyres will go on sale in April, according to Michelin, and prices haven’t yet been revealed. More info at power-bike.michelin.co.uk

Michelin makes some bold claims for these tyres, so we look forward to putting them to the test and comparing them to the older Pro4 tyres, which we've always rated highly.