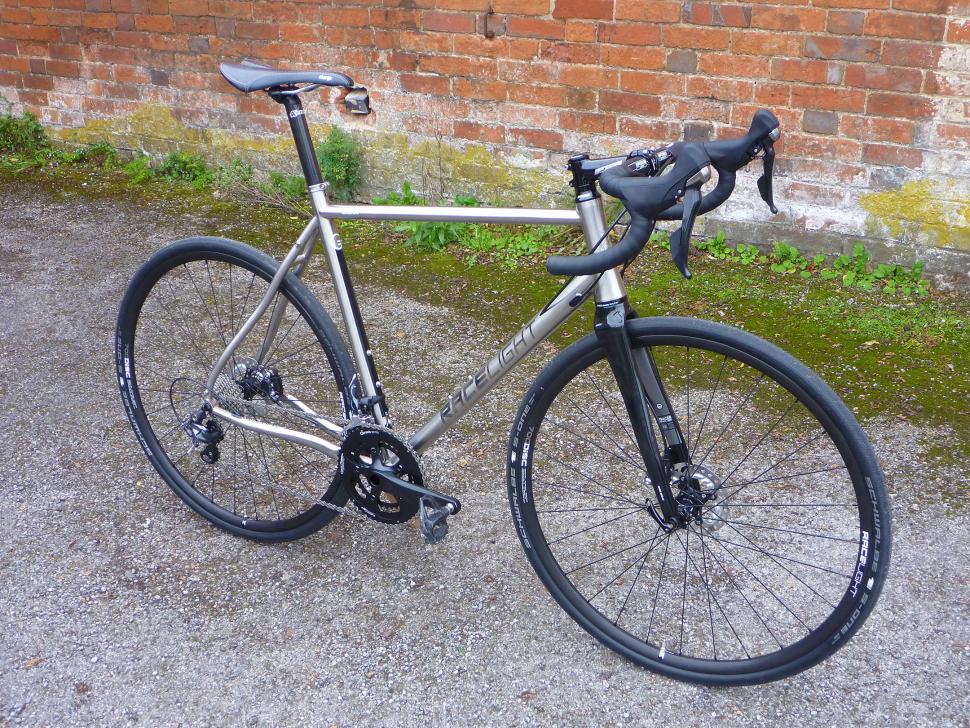 Here’s the new titanium Kinesis GF_Ti Disc frameset that’s currently in for review here at road.cc, designed for long rides year-round and plenty of versatility besides, and priced at £1,799.99 (it’s available only as a frameset).

We’ve tested the Kinesis Gran Fondo Titanium ( non-disc) before and it’s safe to say that it did very well.  We described it as one of the best all-rounders on the market and said it possessed “near superbike capabilities in a frame that is just as at home on the commute, audaxing, sportives and much more.” 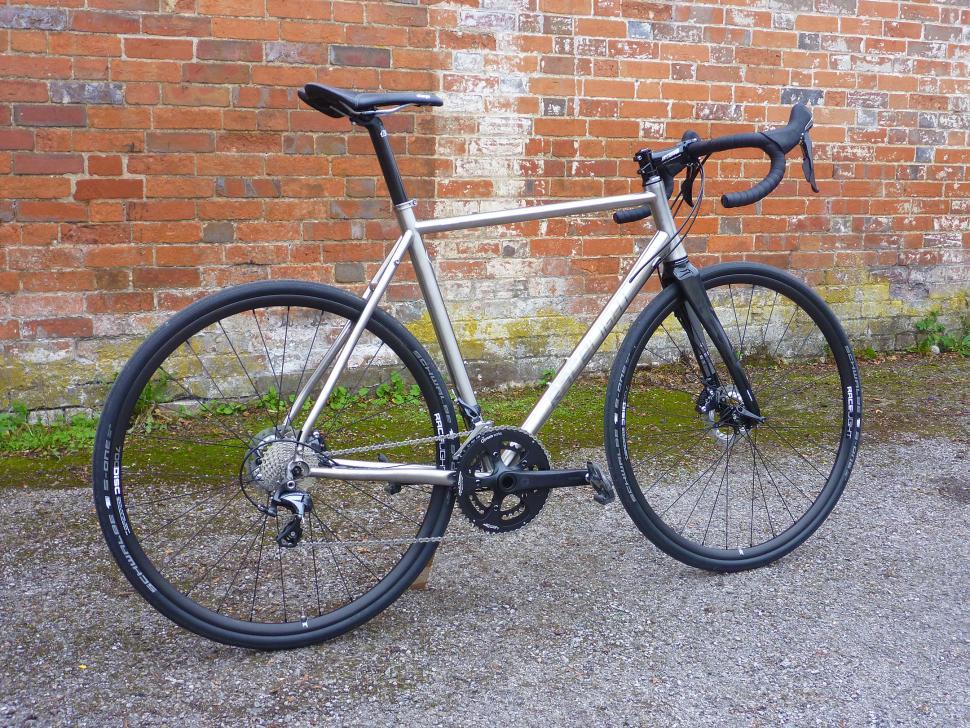 Like the standard brake version, the GF_Ti Disc is made from custom drawn 3AL/2.5V titanium in an easy-to-look-after brushed finish. If you get a scratch, you just give it a quick brush and it’s as good as new. Magic! Kinesis says that the tubing is cold worked stress relieved. What does that mean?

“The tubing is shaped cold and then goes through a process to remove the stresses built up within the tube during forming,” says Kinesis. So now you know. The head tube is milled and tapered, taking a 1 1/8in bearing at the top and a 1 1/2in bearing at the bottom. You couldn’t say that has become the dominant standard these days, but it’s a common way of adding stiffness on higher level bikes. An FSA No.42/ACB headset is included with frame. The K UK logos engraved into the head tube add a touch of class up front, while the down tube logos are laser etched. The bottom bracket, on the other hand, isn’t oversized. It’s a conventional 68mm threaded (British) standard, super-easy to install and replace. 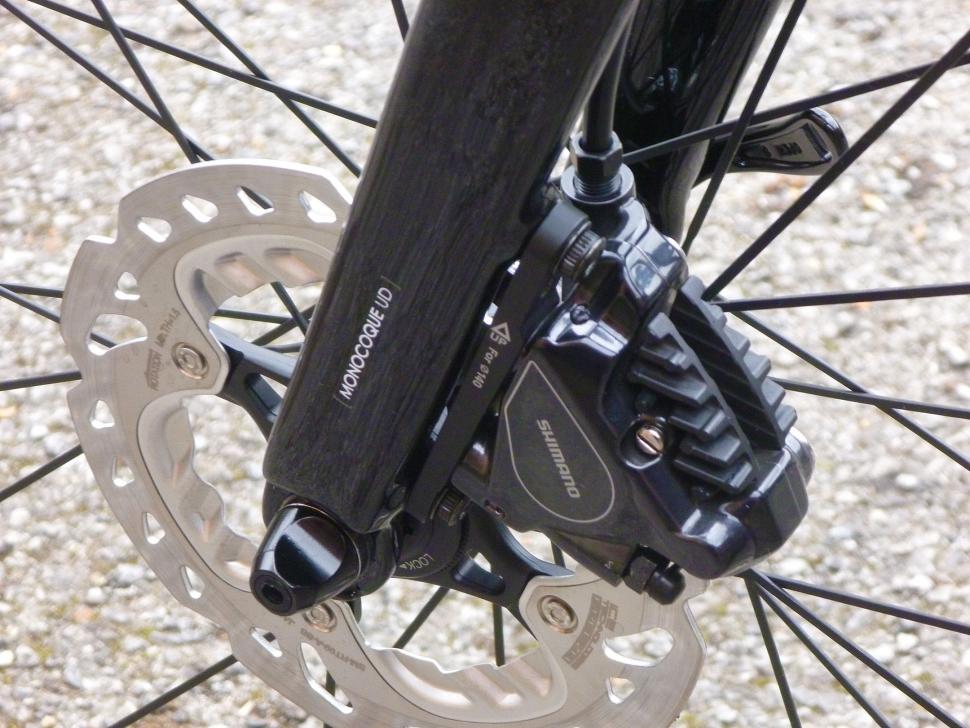 The new fork is Kinesis’ own Tracer Disc, full carbon and, like the frame, it’s ready for Shimano Flat Mount standard disc brakes. 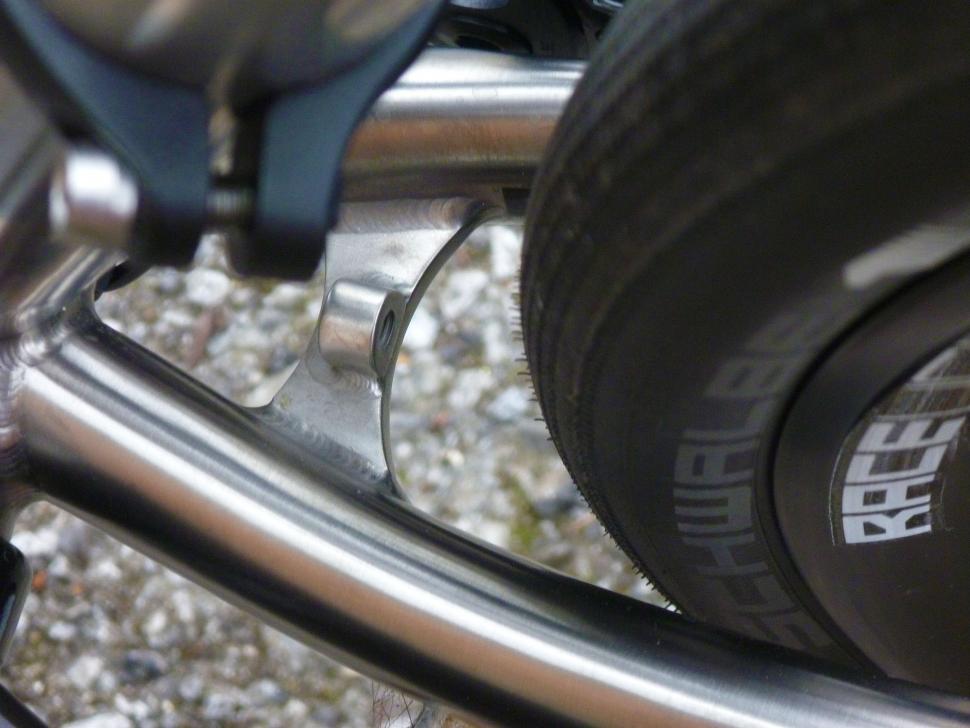 The frame is routed for internal cabling and it’s Di2 compatible if you want to build it up with electronic shifting. It comes equipped with mounts for a rear pannier rack and mudguards, and the fork comes with mudguard eyelets too. This bodes well for the GF_Ti Disc’s use as an all-weather workhorse, if that’s how you want to employ it. 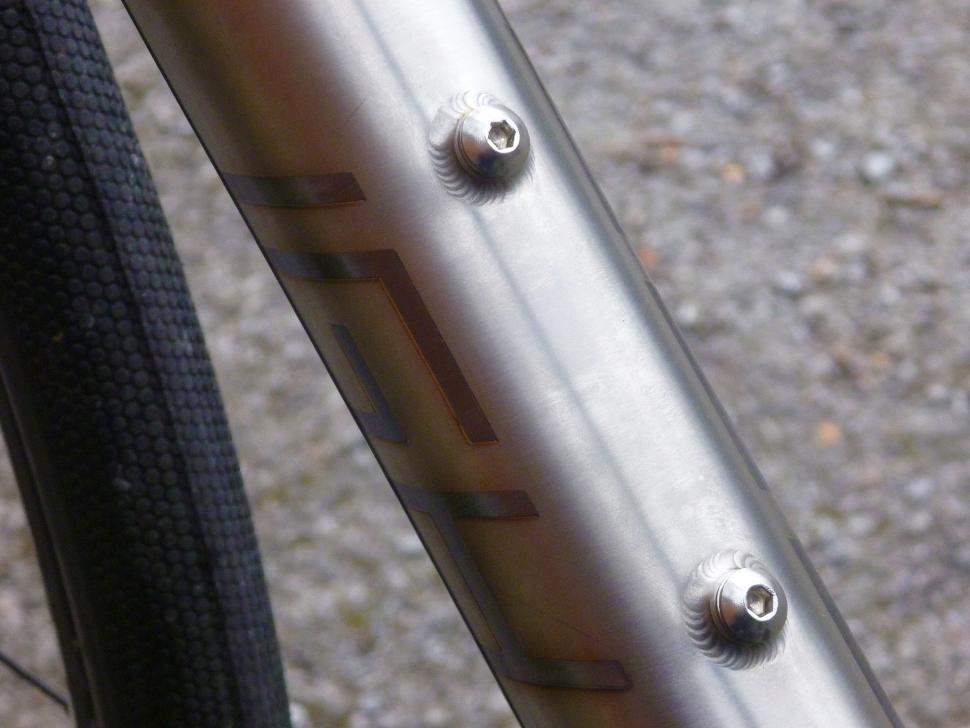 All the eyelets are welded in place, rather than riveted, so that they can’t come loose. The frame takes a 31.6mm-diameter seatpost when many manufacturers of this type of bike are shifting back to 27.2mm for more comfort. It’ll be interesting hear what our reviewer thinks about the quality of the ride.

The titanium seat clamp has been rotated so the bolt, like the frame slot, is at the front. The idea is to keep it out of the firing line of spray thrown up by the rear wheel if you’re not running mudguards. 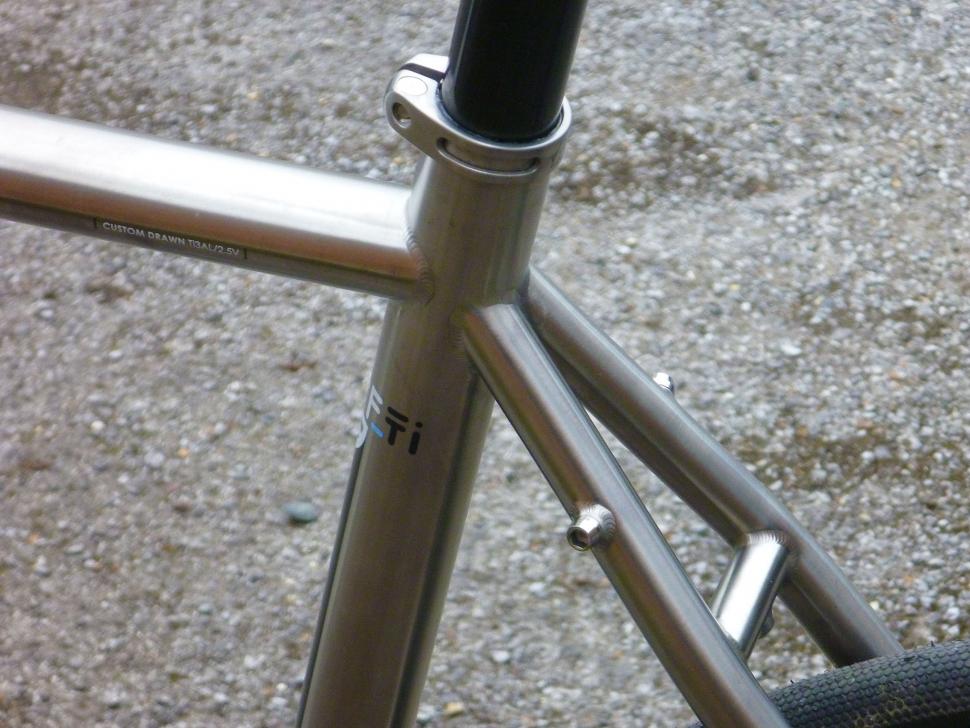 There's a generous amount of tyre clearance. It'll accommodate up to 30mm width with mudguards, 32mm without. The GF_Ti Disc is built to exactly the same geometry as the existing GF_Ti. Seven sizes are available from 48cm right up to a huge 63cm. We have the 57cm model which comes with a 550mm seat tube, a 568mm top tube, and a 175mm head tube. The stack (the vertical distance from the centre of the bottom bracket to the top of the head tube) is 585.1mm and the reach (the horizontal distance between those points) is 394.7mm. Those figures suggest a ride position that sits somewhere between a traditional road race bike and an endurance-style road bike.

The last titanium bike we reviewed here on road.cc was the £2,458 Van Nicholas Chinook, although that’s more of a race bike. 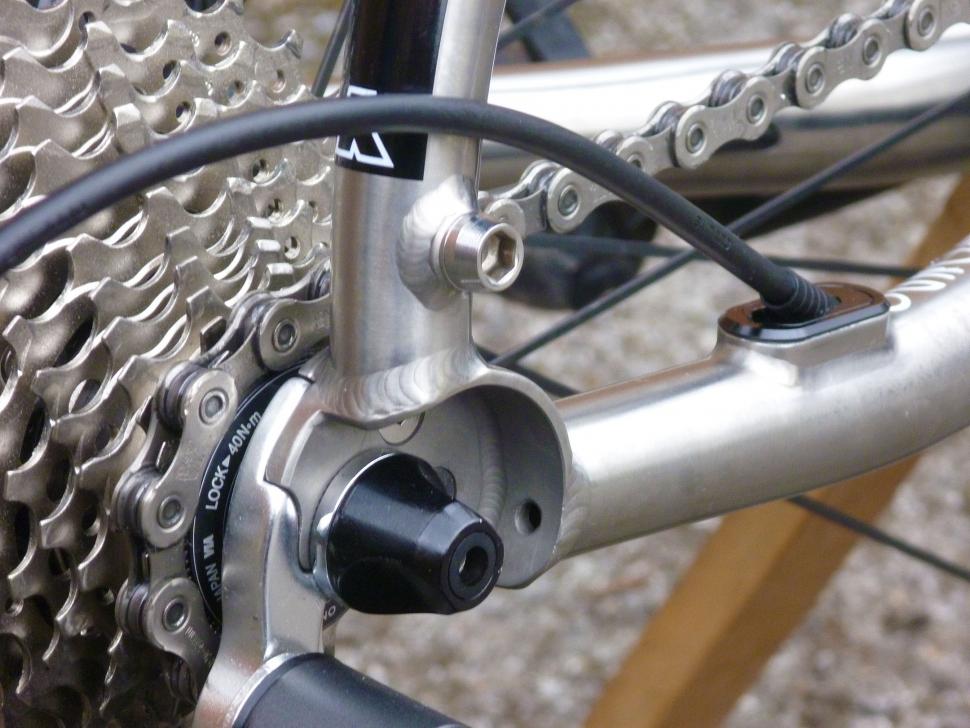 The Sabbath September that we reviewed last year is more similar to the Kinesis GF_Ti in that it’s disc equipped. We described it as “an audax machine that's just at home on the commute, sportive or for light touring”. In other words, it’s a bit of an all-rounder, as is the Kinesis. Ours came with a Whisky Parts Co carbon fork, a Shimano 105 groupset, TRP Hy/Rd disc brakes and wheels comprising Stan's NoTubes Alpha 400 rims and Hope Pro2 Evo hubs. That build was priced at £2,799. 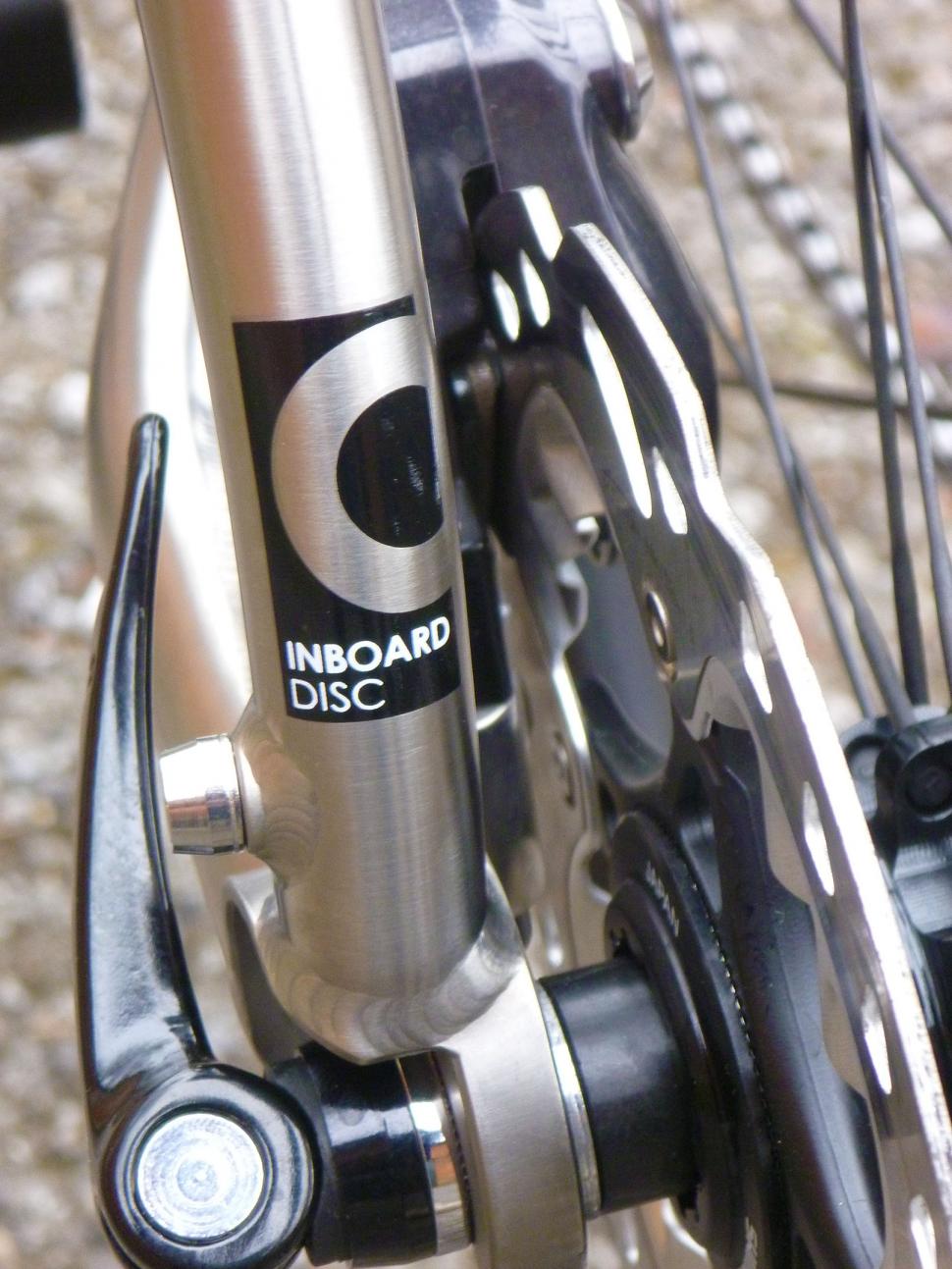 Mike has been thrashing this bike around his local roads for a while so you can expect a full review on road.cc soon. In the meantime, get more information from www.kinesisbikes.co.uk.