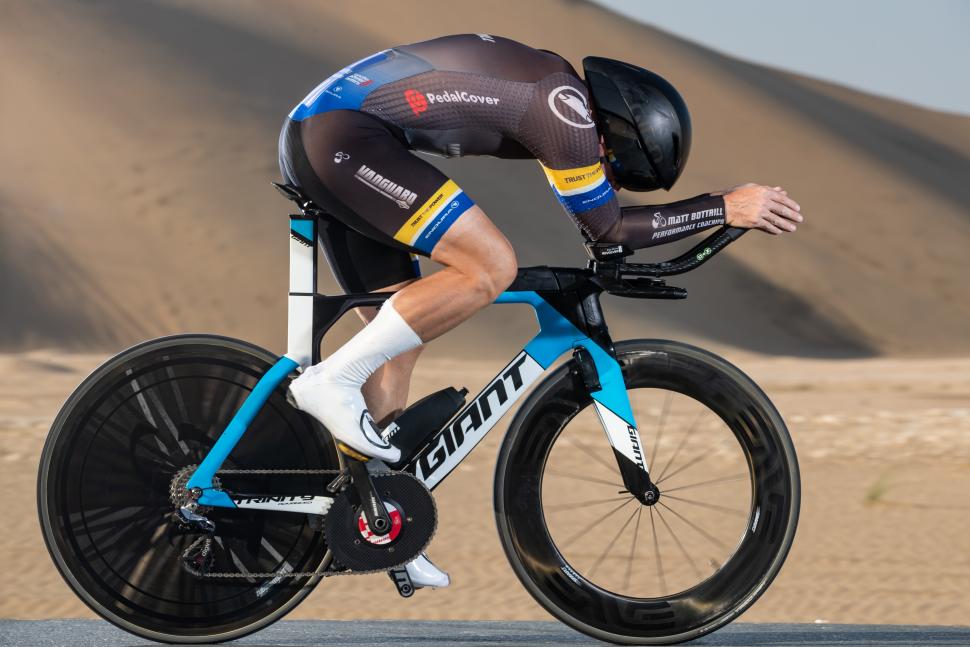 100 miles in under 2:50hrs: Jonathan Parker claims to have clocked the fastest 100 miles ever recorded on a bike

The (pending) world record ride uploaded on Strava puts Jonathan Parker’s time at eight minutes quicker than Jonathan Shubert’s RRA record. Here’s how he did it
by Anna Marie Hughes

Time trial specialist Jonathan Parker claims to have broken the record for the fastest 100 miles during a “test run” this weekend (Saturday, 13 March) with an incredible time of 2:49:58, eight minutes under the current RRA record held by science teacher Jonathan Shubert. 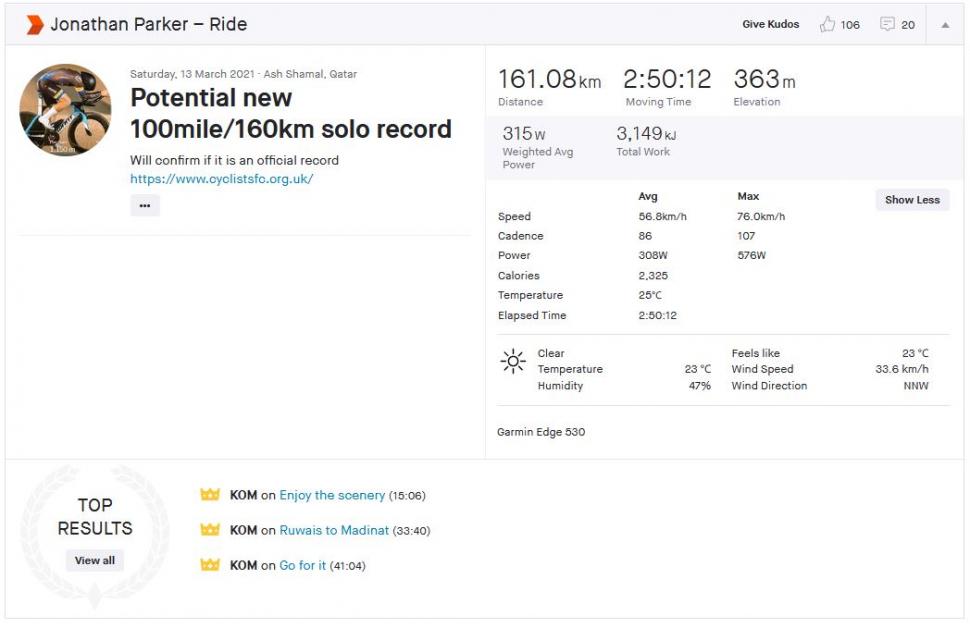 The 46-year-old barrister rode at an average speed of around 35.29mph (56.8km/h) on an A-to-B course from the top of Qatar to a road that ends in the desert in the south of the country.

> How to get more aero without spending a fortune

If the ride he has uploaded to Strava is verified as accurate, that puts his mark at eight minutes quicker than the current RRA (Road Records Association) record holder Jonathan Shubert's time of 2:57:58, that he set just a few months back on November 2 2020. Parker's ride won't be a new RRA record in any case, because it took place in Qatar. According to RRA rules, attempts on its twenty-five mile, fifty mile, hundred mile, twelve hour, twenty-four hour and thousand mile records "may be made in any part of Great Britain provided that easily distinguishable landmarks shall be chosen for the starting, turning and finishing points". An official timekeeper and observers also have to be present for RRA records to stand.

With Parker's existing London-Paris world record being verified by Official World Record, it looks like his effort will be verified by this organisation. 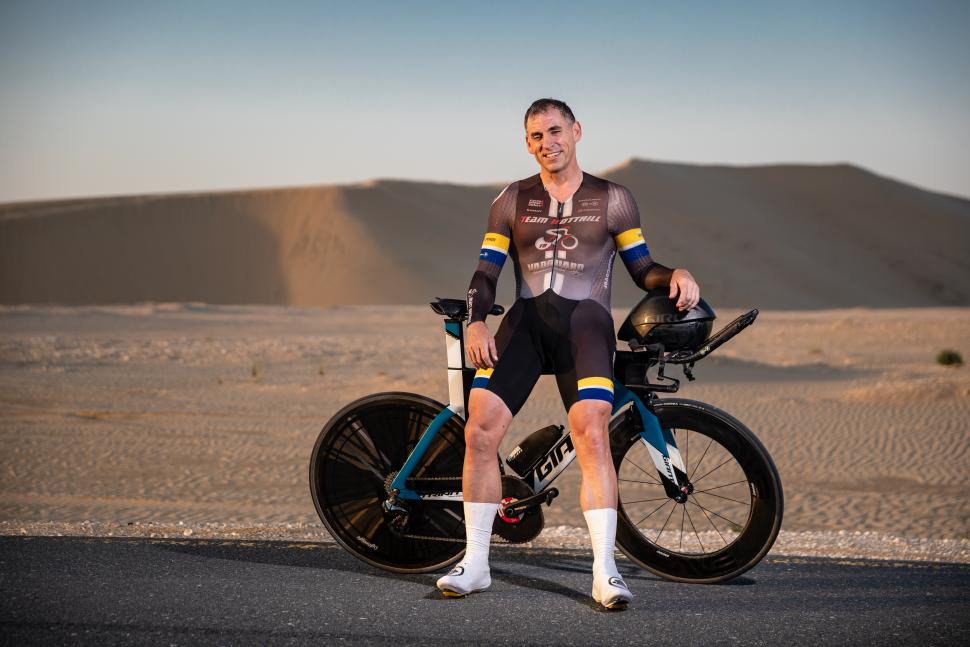 Parker has submitted his data for verification of a new solo world record. As the mark was set on a point-to-point course, the nature of his effort differs from records held by the likes of Cycling Time Trials, who only recognise records that are set in competition. Marcin Bialoblocki holds the equivalent CTT record at 3:13:37.

Not only was this Parker’s first attempt, he “wasn’t trying for the record this time out,” he says.

“I did the ride a few weeks ago on a road bike and it was super quick, so I planned to do a test run on the TT bike. The plan was to smash it until I fell apart, then go and analyse the data to see if the record was doable.

“I didn't even know I was going to do a test run until the afternoon before. I had been looking for good conditions, and the wind direction forecast changed on the Friday afternoon. I had done a few days' training and a 100km ride the day before—not the best preparation!"

Parker csays he had a 33km/h (20.5mph) "cross tailwind" which he admits he “didn’t think would be enough”, as he claims Jonathan Shubert had a more favourable 38km/h (23.6mph) tailwind. “But when I started, the average speed was great and I felt pretty good, so I just kept going. After about 120km, it was clear that I had a chance to beat the record if I could keep going to the end. I'd not really been pacing for the whole ride though and that last 40km was nothing short of horrible. I stopped pedalling lots towards the end, just to get small breaks.”

With a body weight of 79kg, Parker dug in to hold a normalised power of 318 watts over 100 miles. “There was a horrible slow crosswind section where I really had to tuck in and push 390 watts for nine minutes.”

While this may have been Parker’s first go at the 100-mile record, he has completed several impressive rides to raise money for Cyclists Fighting Cancer.

“In 2016 I raised around £11k setting the London to Paris world record, in 2019 I raised £14,000 attempting a record crossing the "desert of death" in China (it ended with a crash and broken bone), and last year due to lockdown I raised £4,000 doing a six-hour Zwift ride with my long term coach, Matt Bottrill.

“If the test run suggested the 100-mile record was possible, I had intended to try and raise over £10,000 for Cyclist Fight Cancer. I'm going to have to find a new challenge now.”

Although Parker has a house back in Herne Bay (Kent) he mainly lives in Doha (Qatar) and this is where he set his (pending) record time. 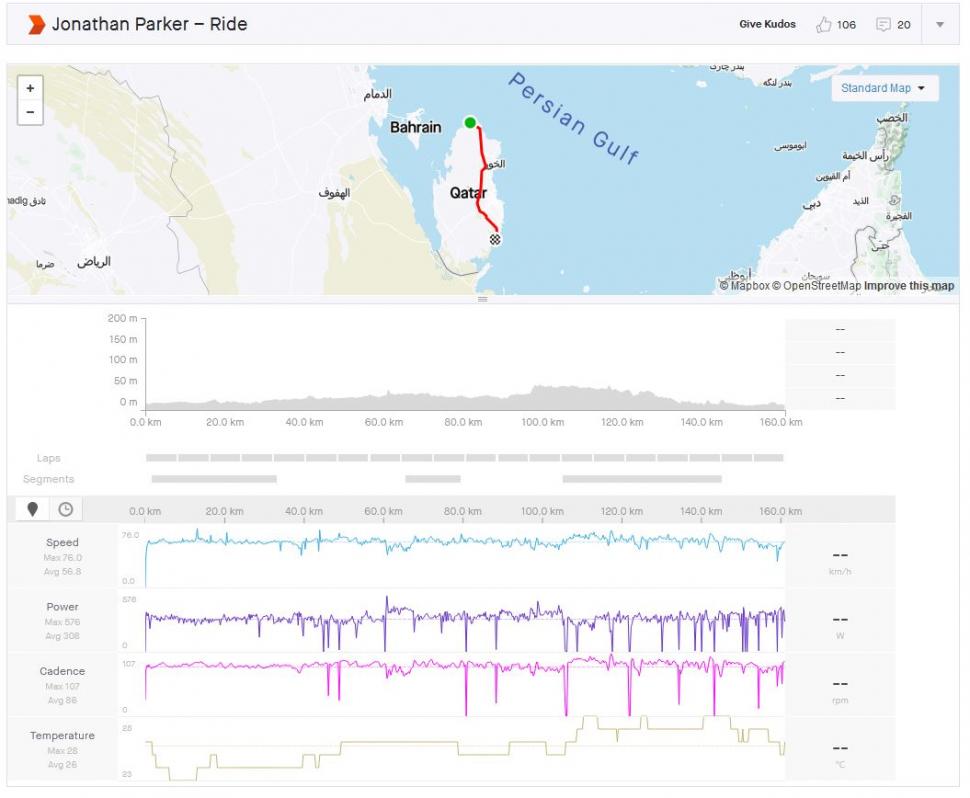 “Given the size of Qatar, there wasn't much choice of route. I had about 1.5km left at the end before I hit sand. Qatar is very flat, so there was no opportunity for a long downhill start and roads like the ones I used have very little traffic, so there was no being sucked along with the flow.

“Looking at the data and pictures from the previous record, it appears that there was a long downhill section at the start, then a lot of cars en route. Without those, I wasn't sure if I could beat the record. This was the main reason for the test run to gather data,” Parker explained.

Parker’s friend drove him to the start, followed the whole ride and then brought him home afterwards. “He had spare wheels, tools, etc. in the car in case of mechanical problems," said Parker.

Although most of the roads were quiet, Parker did experience a close call.

“At one stage a truck was overtaking me on a two-lane highway whilst another truck was trying to join my lane from a slip road. If the battery in my heart rate monitor was working, you'd have been able to see where that happened from the data.”

The TT specialist was aboard a Giant Trinity Advanced Pro, with a Pro tri-spoke wheel at the front and Aerocoach disc at the rear, along with Speedplay aero pedals and an SRM power meter. 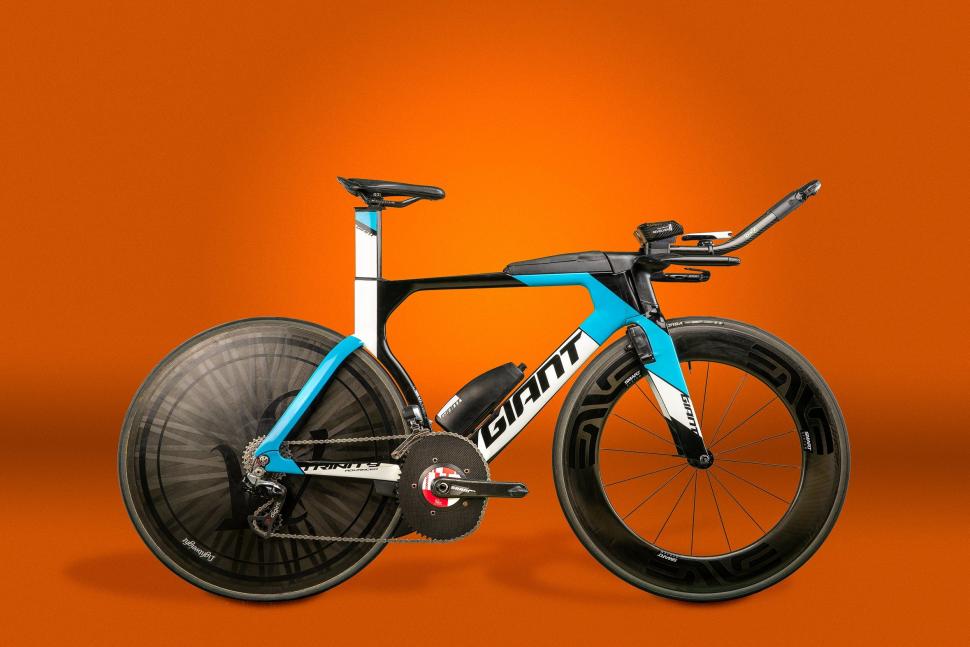 But the bike is not the only important bit of kit when it comes to a record-breaking attempt and Parker ensured he optimised in other areas too.

“I've done a lot of aero testing (wind tunnels and track, plus using Notio to do my own testing), and clothing makes a big difference,” he said.

He added: ”There is a lot of attention to detail on drag savings given that over 100 miles at high speed, just 2-3 watts can make a significant difference. Small details to reduce drag include the use of Speed Skewers and taping the vents in the helmet, while other forms of drag were minimised through such means as coating the chain in melted PTFE powder and running the super low rolling resistance Veloflex Record 2020 tyres.”

For gearing, Parker used a PCD oval single 58 tooth chainring, which he says is around the equivalent of 60t at the high points of the oval. He had a 62 tooth chainring on order that he was planning to swap in for the actual record attempt.

“I'm an old grinder. When I won the Qatar national championship TT in January, I averaged 78 cadence. On the really fast parts I was doing 105 rpm cadence – that's unchartered territory for me and was a struggle.

“A side effect was a lot of movement of the saddle causing sore bits after 40 minutes and getting worse as time progressed. It's still sore to sit down a day or so after.”

Then there’s the fuelling. This is something Parker takes very seriously. He said: “I tend to calculate my nutrition quite carefully on all rides over an hour – to the point that friends laugh at me with my timers to remind me to take a gel.” For the attempt, Parker said: “I used a mixture of sports drinks and gels that have a 2:1 glucose-fructose mix, as the body can oxidise more carbs per hour with fructose included as the GLUT5 transporter is engaged. I take 90g of carbs per hour and 600ml of fluid.”

Parker says it usually takes a few weeks for records to be verified; we will update this feature if/when there’s confirmation.