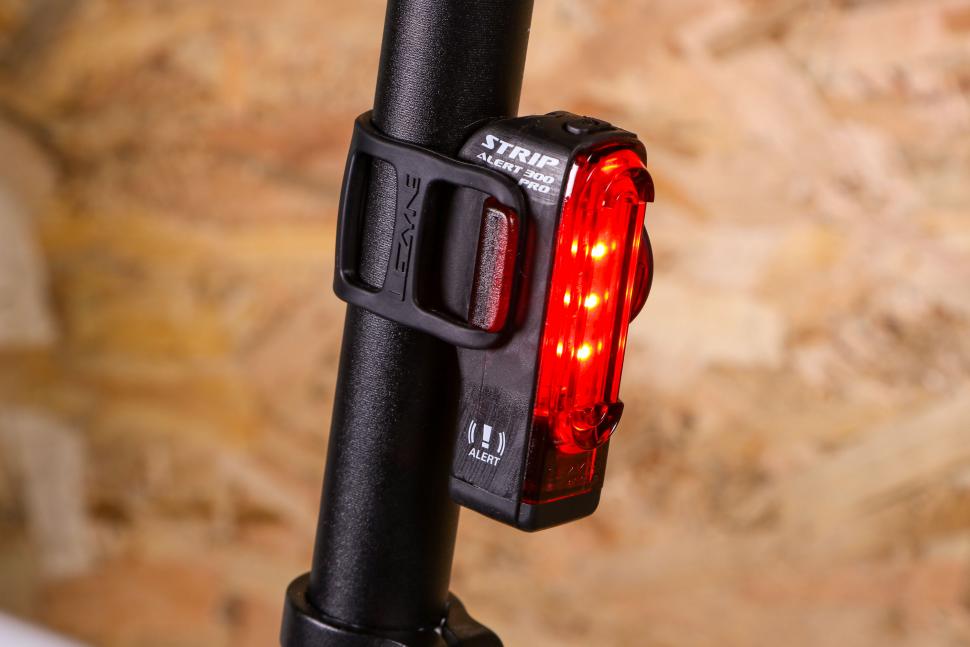 The Lezyne Strip Pro Alert Drive sits at the top of the tree in Lezyne's rear light range. Its eye-searing modes are enough for visibility even in bright sunlight, but I personally found that for every positive the Alert feature adds, there's an accompanying negative.

At first glance you'd be forgiven for mistaking the new Strip Pro for the cheaper Strip Drive or even for older versions still. That's not a bad thing – that rubberised outer and co-moulded design has proven pretty robust.

Like the cheaper Strip Alert Drive Stef recently reviewed, no Ingress Protection (IP) rating for water and dust proofing seems to have been published, which for a light this expensive is underwhelming.

That said, it has survived a few months of Britain's grimmest conditions (you can do your own political/viral jokes here) and the hose pipe test.

The ladder-style rubber strap accommodates a wide range of seat post diameters, and feels more robust than some other lights. There's also a tapered insert to work with flat backed or large diameter posts, which is either a new addition or something I just lost very quickly with my old light.

On both my bikes – with a Kamm tail and large (30.9mm) diameter seat post – this wedge was definitely necessary to prevent the light sliding round to the side. It also alters the angle of the light, though, angling it up into the eyes of following drivers... great for visibility, but unwise at the maximum 300 lumens.

Like the cheaper Strip Alert, the Strip Pro Alert has five LEDs, but output is upped from 150 lumens to 300. This is so insanely bright words can't really do justice! The only similar thing I've used is the Moon Sirius Pro 350, and like that, the Lezyne leaves you confident you're getting seen, even in low, bright sun, and by every single driver who's not looking at their phone.

On paper the run times are very good: 28 hours for the five lumen Femto mode, 6.25hrs in the full-power Day Time, and 8.5hrs in my favourite Flash 2. There are 11 modes in total, so plenty to choose from and roughly double what you find on the cheaper Strip Drive.

However, just as with that cheaper version, the Alert function really messes with the battery. It uses an accelerometer to warn others you're braking, and under steady deceleration it gets brighter (even in Blast mode), while braking hard or stopping completely sees it flashing wildly.

Or that's the theory. In practice it's very touchy – even gentle braking, a small incline or getting out the saddle sets it off, and it's power-hungry. Some rides I'd be getting almost the claimed times, and then others only just over half. This makes using it a bit of a guessing game, and I kept peering under my saddle to check it was still on – something I'd rather not be doing.

Also, while it's undoubtedly useful when riding solo or commuting, on group rides its powerful strobing is quick to irritate following riders.

To be fair, I was also underwhelmed by the 'Smart' tech on the Moon Sirius, and considering how much group riding I do, I certainly feel some refinement to these systems is needed before I part with my own cash.

Beyond Alert, this operates like a normal light. The single raised button can be operated whilst wearing gloves, and like many these days the Strip Pro has a memory and turns on in whatever mode it was last in. Handy.

Two small lights on the side act as a battery indicator, though they can't be seen whilst on the bike. Still, despite the effects of the Alert mode on battery life, I never got caught short, even during some five-hour rides – overall it's pretty long-lived.

The rubber bung pops off the bottom of the light (and is usefully tethered) to reveal a micro USB port. I'd have liked a more current USB-C port, but the micro USB does the job and charges from flat in about four hours.

At £55, the Strip Pro Alert Drive sits at the premium end of the market. There are more expensive options, such as the £65 Exposure TraceR Mk2 with the similar ReAKT, but that has a Peloton feature that prevents it flashing when there's a bike light behind you. Although even this system has its limitations, I think it's well worth it.

For £55 there's the Moon Sirius Pro 350 mentioned earlier, and it's even brighter, though much more complex to use. Personally I'd be tempted by the older Strip Drive Pro 300 (£50) and forgo the Alert – it has all the good features, such as 270 degree optics and plentiful modes, without the unpredictable run times and annoyance on group rides.

Lezyne's Strip Pro Alert Drive is a good light, but I think the Alert needs meaningful refinement to be genuinely useful. The run times are much better than on the cheaper Strip Alert Drive version, despite the doubling in brightness, but you do pay a premium for it – which is only higher if you don't use the Alert function anyway.

Lezyne says: "The Strip Alert Drive is an advanced LED bike taillight with our custom-programmed 'Alert' technology, A versatile mounting system attaches to aero or round posts and it's micro-USB rechargeable. This is the ultimate cycling taillight for impressive daytime visibility and superior visibility after dark."

I think it's ideal for mainly solo riding, although I did find the requirement of an additional wedge on wide seat posts was a pain and the Alert technology could do with some refinement.

Single button is easy to use. Lots of modes to navigate though.

Annoying that a wedge is required for flat or large seat posts. The ladder strap accommodates many sizes and seems robust.

No IP rating, but survived the shower test and lots of wet rides.

On paper they're very good, but the unpredictability of the braking function means burn times don't always live up to the claims.

Seems robust and has survived some knocks, and suitably water resistant despite the lack of an official Ingress Protection (IP) rating.

You get a lot of illumination and a rugged design, but you can find it cheaper if the Alert functionality doesn't appeal.

On thicker seat posts having to use a wedge is a bit of a pain, but once on the light does make you feel safer... unless you're the person following and getting annoyed by the flashing.

It's at the premium end of the market. It's the same price as Moon's range-topping rear light, though still cheaper than the likes of the fully-loaded Exposure TRaceR Mk2.

Would you recommend the light to a friend? A few

The daytime flash is super bright and the 270 degree lens is good, but you pay an awful lot for the Alert technology – which compromises run times without adding a whole lot. The use of a wedge on large or flat backed seat posts to prevent it sliding around isn't the cleanest solution either. With a more reliable brake light and a smarter mount it could score higher.