8
10
Powerful, effective and efficient safety light – bright enough to combat even winter sun
Day flash is very noticeable
Loads of modes
Well built and waterproof
Easy to use
Decent run time
Could be a bit lighter
Weight:
64g
Contact:
www.upgradebikes.co.uk
How we test

New for 2020, the Lezyne Strip Drive 400 has been updated with a bright and really eye-catching day time flash, commendable battery life and faster charging. As with the old model, it's also fairly light, easy to operate, has loads of functions and is waterproof too. It's more of a be-seen rather than seeing light, though.

We reviewed the original Strip Drive over four years ago, and it was good then; the 2020 version improves it with a 400 lumen flash that's pretty hard to miss. A flashing mode, it illuminates three of the row of five LEDs (left, centre and right) several times before pumping out an almighty 400 lumen all-guns burst.

It's designed to improve visibility in the day, in sunlight, and boy does it work. It's not really suited to dull days, but those when the sun is so bright that normal lights get washed out.

Alongside are six other flash modes – a mixture of outputs and effects – and three constant modes with 100, 50 and 15 lumen ratings. Just hold the easily accessible button to turn it on or off, then push to cycle through each setting. When you turn it off again, the light remembers the last setting for next time.

At night, the 100-lumen Blast is pretty powerful, and you'll certainly get noticed with it (though it's not going to light up the road itself). The flashing effects are good to have, and the KITT-style strobing mode is especially pleasing in an urban night setting. 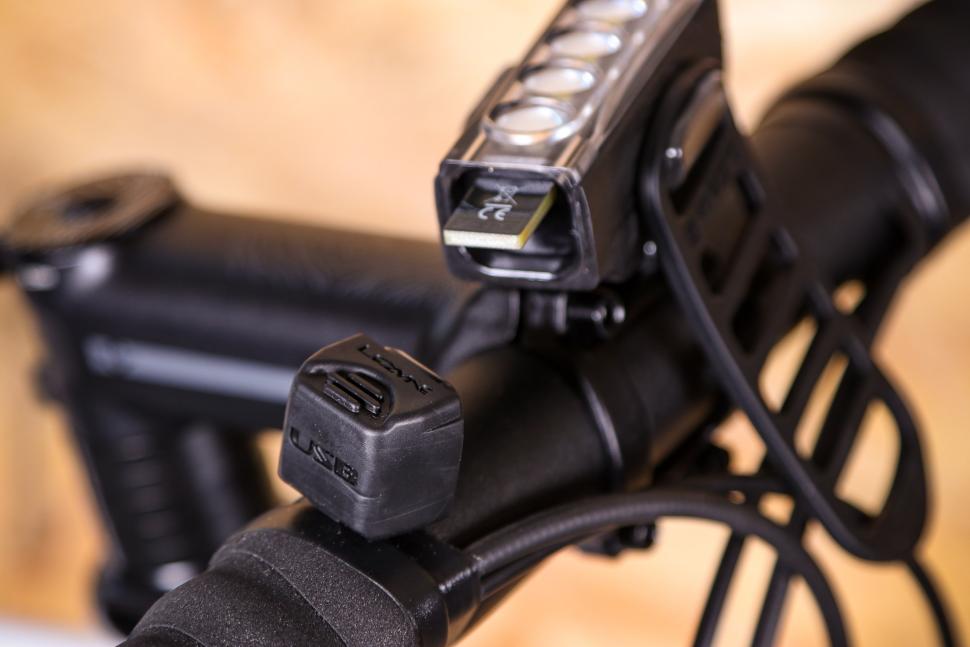 It's a slightly different matter in the day, though. From 200 feet all modes are clearly visible, but the strobing mode is least effective, probably because it's the dimmest of the flashes. Unsurprisingly, the 400 lumen day flash is the most effective.

Side visibility is built in to help at junctions, though it only works if you mount the light vertically, as you would with the red rear version... not much good when strapped horizontally to a handlebar, then.

A single rubber strap secures the light via hooks on the light's casing. It's a simple system, and the strap's generous width keeps the light securely in place. The integrated rubber mount is designed to work across a range of tube sizes, too, and as it's narrow it's also aero bar friendly.

A curved cutout at one end lets you get the light close to the centre of your bar, the cutout cleverly flowing round the end of the stem, keeping things nice and neat.

It's quite a chunky unit, but because it sits so close to the bar, it blends in without spoiling the lines of your bike. At 64g it's lighter than it looks, if not quite weight-weenie level. Classic Lezyne, it feels comfortably over-engineered, and though it doesn't explicitly state any kind of shock proofing, its co-moulded lens/body construction feels like it could take a beating.

There are a few other subtle, but nonetheless important, updates on this new model. The first is an increase in runtime, with Lezyne claiming a potential maximum 21hrs 30mins on the most frugal 50 lumen flash, which is really impressive. In testing, the least frugal – the 100 lumen Blast – managed a commendable 3hrs 30m, which is an hour longer than Lezyne claims.

This increase is no doubt largely due to improvements in battery technology, but it's aided by the automatic switch to economy mode (a 15 lumen constant light) once the battery dips under five per cent - a feature that wasn't on the original model all those years ago.

As before, the battery indicator is built into the lens - green means the battery charge is over 75%, green and red means it's between 75-25%, while red means that the battery is below 25%. You can press the power button to check without turning the light on, which is really convenient.

Not only is the battery longer lasting, it's quicker to charge - just two hours versus the three of the old model. Thankfully, the integrated USB connector hasn't been changed. Hidden behind the rubber cap on the side, it's a feature we love because it means there's no scrounging around for the right cable when you want to charge it.

Lezyne claims the design is waterproof, and a few minutes under a running tap did nothing to prove that wrong.

At £35, the Strip Light Front is well priced. The Giant Recon HL 200 front light is the same price, is lighter, and though not quite as nicely designed or with as many modes, it's got similar run times and a substantial 30-hour battery life (though only at a rather weedy 10 lumens, against the Lezyne's 21hrs+ at 50 lumens).

It can't match the Lezyne's 400 lumen day flash mode, though.

Knog's smart-looking Cobber Mid Front Light is also lighter than the Strip Drive, fits flush with your bars, and offers an unbeatable 120hrs (on 25 lumen flash) along with an impressive, if not quite as bright, 320 lumen maximum. It's nearly twice the price at £59.99 though.

The Exposure Trace DayBright is another great option, as it weighs only 44g and costs just £5 more than the Strip Drive. It boasts a decent 110 lumens with three hours run time, or 24 hours in its dimmest flash. It does sit atop the bar rather than flush, though, so it's not as neat.

The updated Lezyne Strip Drive is well made, bright, easy to use and feels really robust. It's an excellent way of getting yourself seen, day or night, whatever the weather, at a competitive price.

Lezyne says, "The Strip Drive Front is a highly versatile LED cycling light offering up to 400 lumens. It features a lightweight and waterproof design with a durable co-molded lens/body construction."

It's a light to get you noticed, rather than to light the way in the dark.

Very easy to use, and not needing a cable to recharge it is brilliant. It fits all kinds of bars (including aero bars) and is cleverly designed to allow you to mount it close to the stem.

Simple but very effective - it takes seconds to attach, and the wide rubber strap holds the light firmly in place.

Lezyne doesn't say much other than "waterproof," but no issues. No signs of water ingress even after it sat under a tap for several minutes.

Battery life is good. At a constant 100 lumens, the Strip Drive lasts 3:30 hours – an hour and a half longer than Lezyne's claims. Charging is super easy thanks to the built-in USB stick - no need to find that cable!

Very visible on all settings, especially with the day flash. The 100 lumen constant mode doesn't light the road, though, so this is more of a be-seen light.

Not the lightest in this field, but lighter competitors don't offer quite as much power.

On par for its performance.

The five LEDs really help you stand out, while the new day flash setting is noticeable on even in low, bright winter sun.

Compared with similar performing products, it's priced pretty well. It's the same price as the Giant Recon HL 200, but brighter and cheaper than the Exposure Trace DayBright. Even the Knog Cobber Mid Front Light, with its 320 lumen flash mode, isn't as powerful and it's almost twice the price. All three are slightly lighter though (only around 20g, but still).

The Lezyne Strip Drive is a really good light, and punches harder than many with its 400 lumen flash mode. It would be a nine if it was just a bit lighter.