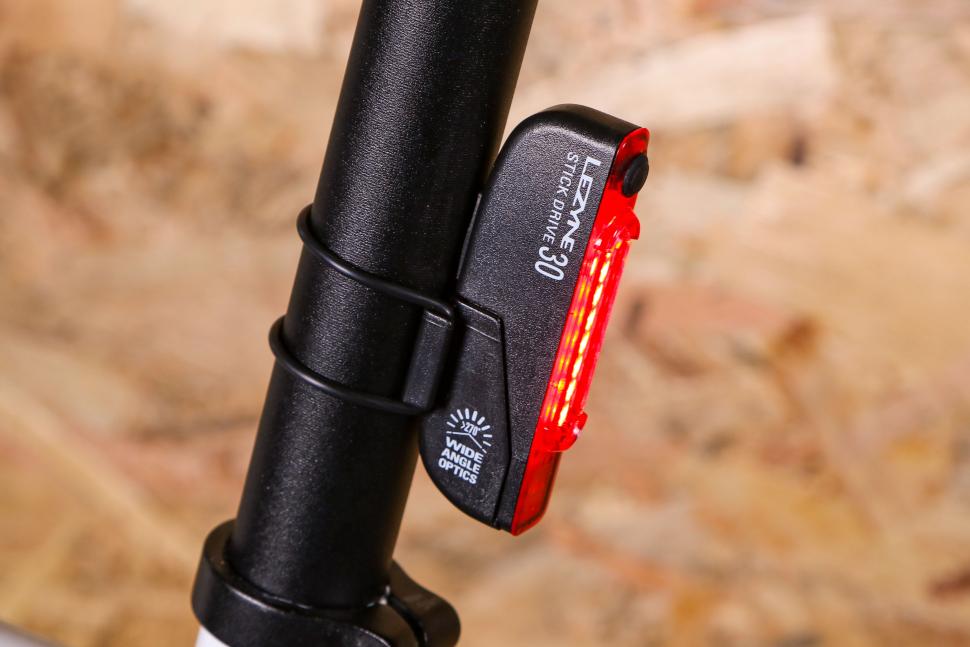 7
10
Capable rear light for general riding, if not endurance rides along the very darkest lanes
Lower, more frugal settings are more captivating than numbers suggest
Not the longest run-times in higher constant settings
Weight:
22g
Contact:
www.upgradebikes.co.uk
How we test

The Lezyne Stick Drive rear light is a seven-function model pumping out a maximum of 30 lumens. On paper, some of the settings seem decidedly underwhelming, but the blend of optical technology and strobing patterns means they're surprisingly usable. And don't be fooled by the slimline profile – though it has a sleek aesthetic, the Stick Drive's Wide Angle Optics lens is designed to project light at 270 degrees and it works well, providing decent peripheral presence.

Behind the lens there are eight diodes, all fuelled by a rechargeable lithium polymer cell. The body and lens are described as 'composite matrix', and though Lezyne is a little vague on the waterproofing front – it's 'built to be highly water resistant' – I've been through some very heavy, continuous rain with no issues. It meets FL1 standards: essentially, it should resist a drop of 1 metre without incurring damage.

The switch is a small, firm, rubberised 'pimple' at the top of the unit. Engagement is positive, preventing unwanted power-ups in a pocket or luggage, and easy enough to use wearing thick winter gloves.

Seven modes isn't unusual these days, and the Stick Drive has a memory function so you can just click straight back to your last or default setting.

I'll start with the 30-lumen daylight mode. Okay, it's not as retina-tickling as some, but it has certainly grabbed attention through more overcast autumn afternoons, something I attribute to a combination of diode tempo and optics. I seemed to register on approaching traffic's radar from 150 metres or so along rural roads, maybe 100 through suburban stretches where there are more distractions. Despite the shallow lens, there's decent peripheral presence for when you're turning right or negotiating roundabouts.

> Embrace the darkness: 6 tips for cycling at night

The Blast setting caught me by surprise, being much brighter than 30 lumens might suggest. I've been spotted at 250 metres on some very dark, murky nights in the back of beyond. For the most part, that's where it belongs: it's far too bright at close quarters, whether that be on a socially distanced group ride or through suburban settings at rush hour.

I'd be inclined to go for the economical 12-lumen Flash 3 for most contexts – it's distinctive enough around town and even along the lanes, although I'd probably pair it with a second one for longer haul/regular back road riding.

Sequencing aside, I was genuinely surprised by how potent the lower settings were: 4 lumens sounds very much like glimmer territory these days, but the combination of optics and diodes meant it felt comparable to others in their 10-lumen settings – and it's certainly adequate for town, where we're talking visible from 50 metres, maybe 65 outside of the city. You'll be seen, and it shouldn't grate on riders following your line.

Run-times were very faithful to the cited figures across the board, though they're not overly generous in the higher constant settings, Blast and 12-lumen Enduro. Neither falls short of the times Lezyne claims, and they're fine for training runs/middle distancing commuting (if you keep on top of charging), but the 1hr 30mins and 3hrs 30mins respectively might prove limiting for some.

Though not essential, an auto kick down to the most frugal mode would be welcome – ideally, we'd all be religious with our charging but in reality life can get in the way sometimes. If you are prone to this, for general/solitary riding I'd be inclined to plump for that 12-lumen Flash 3, which will chirp away for almost 23 hours.

Lezyne has gone for an integral USB charger, which is very neat and a boon if you're prone to losing charging cables. It's neatly hidden from the elements by a secure, magnetised panel-cum-mount. Plug in, and give it 2 hours at the mains (add another 20 minutes or so if you're refuelling from a laptop). The charge indicator will pulse red before going 'out' when the unit is fully juiced. Pressing the button will give a 'traffic light' status as to battery health, so you can staircase down, if necessary, to get home.

Lezyne has traditionally gone the 'ladder strap' route, which I'm actually rather fond of. This time, it's opted for rubber doughnuts – one for standard, the other oversized tubing. The smaller certainly affords decent purchase on seatposts between 25.4 and 27.2mm, right down to seatstays.

The other benefit to this simple system is that the bands are ubiquitous, so getting hold of a replacement shouldn't be a headache, in the event of loss/breakage.

The £30 mark is a highly competitive battleground, but when everything is factored into account, the Lezyne represents decent value. It offers good build, and a sensible range of modes and features that will cater for most riding contexts.

It compares well with the Ravemen TR50, which weighs in at £34.95, but although that pumps out a maximum of 50 lumens – and could be a better choice if you are regularly tackling pitch black roads – peripheral punch doesn't rival the Lezyne's. The Ravemen's bike-mounted bracket is also fiddly, and the touch-pad selector an acquired taste.

Although cheaper at £27.99, the Blackburn Dayblazer R65 is a little heavier and doesn't have a memory function – though it does pack 65 lumens and boasts a lifetime warranty against manufacturing defects.

Those keen to get as many lumens for least money may find the Oxford Ultratorch Slimline R50 LED worth a look. It comes in at £17.99 and offers 50 lumens, but the materials feel inferior, ditto peripheral punch, compared with the Lezyne.

Although it's not the brightest light in the market, the Lezyne Stick Drive still offers decent presence and economy, for a pretty good price.

Capable rear light for general riding, if not endurance rides along the very darkest lanes

Lezyne says: "The Stick Drive is an incredibly thin and lightweight rear bike light equipped with eight super bright LED emitters. Its minimalistic design is optimized for versatility and ease of use. A simple o-ring securely straps it to a bicycle seatpost, and an innovative magnetic attachment separates the light from the mount for quick charging accessibility. It's equipped with an integrated USB stick for cable-free charging, providing up to an impressive 23 hours of runtime. The Wide Angle Optics lens creates up to 270° of visibility, and the light outputs up to 30 lumens - this includes a disruptive Daytime Flash feature among its seven modes. With its narrow design and compact mount, the Stick Drive is the perfect taillight for maintaining aerodynamics and also attaching to seatposts with minimal space - like a dropper post. Designed and produced in-house, the Stick Drive is engineered for long lasting durability and built to be highly water resistant.'

It's not the brightest light but offers plenty of presence and, mostly, decent run-times.

I was a little skeptical of the magnetised panel but it seems very reliable. The o-ring strap is perfectly adequate and easily replaced if lost or broken.

2-hour charge times and run-times very faithful to those cited, though Blast and Enduro modes aren't the longest running.

Brighter than the numbers would suggest.

Overall, and in keeping with other Lezyne lights in my collection, the Stick Drive seems much brighter and more usable than the numbers might imply. Blast and Enduro aside, run-times are very frugal and charging times equally practical. I've sometimes wondered whether the very lowest 4-lumen settings could be culled, but they could be a godsend should reserves dwindle.

The Ravemen TR50 weighs in at £34.95 but lacks the Lezyne's peripheral punch; cheaper at £27.99, the Blackburn Dayblazer R65 gains lumens but also weight, and doesn't have a memory function; Oxford's Ultratorch Slimline R50 LED comes in at £17.99 but is inferior in terms of materials and peripheral punch.

Would you recommend the light to a friend? For the most part, yes.

It's a capable rear light for general riding, though there are better options if the majority of your riding is along unlit country roads.