ETC's Rana 180 Rear Light is a striking option offering plenty of modes, some decent run-times and quick recharge. However, the braking function is oversensitive, and the run-times are very unpredictable and, at times, very short.

The Rana is a simple, functional design: the long strip of LEDs throws out light to the rear and laterally, thanks to a translucent, hard case edge.

The unit is nicely shaped and sturdy – I've dropped it from a height several times and the casing is still looking as good as new. I'd have no worries about its ability to survive a fall from the bike, though this is unlikely as the light locks securely into both brackets.

There are two mounting options for the light. The first is a bracket attached to a silicone band that wraps around your seatpost. It's tapered so the light sits vertically once mounted. It'll go on an aero post, but it's not a great fit. The groove is shallow, so there's a tendency for it to swing slightly to one side. It's also not that easy to get on and off as there isn't enough band to grip after the last hole, which you'll probably need to use. 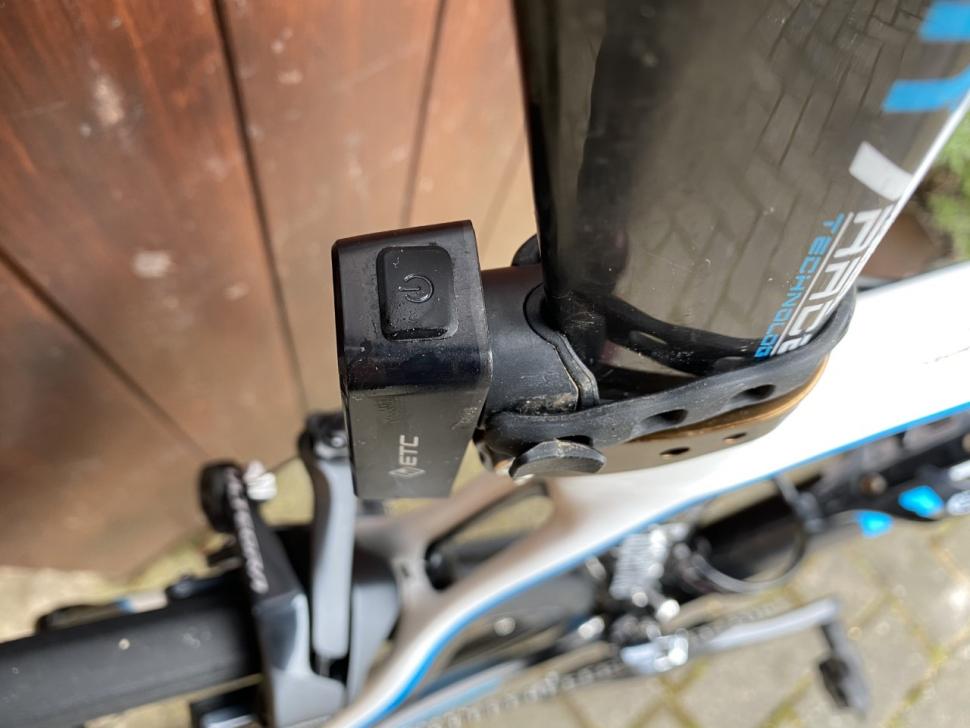 The second mount is a split-arm bracket designed to clamp to seatpost rails. It works well – it has a little flex so it compresses and then widens to clamp. It worked on all of the saddles I tried it on, though that's not a guarantee for every saddle. It's a great design for those who don't use saddle bags. 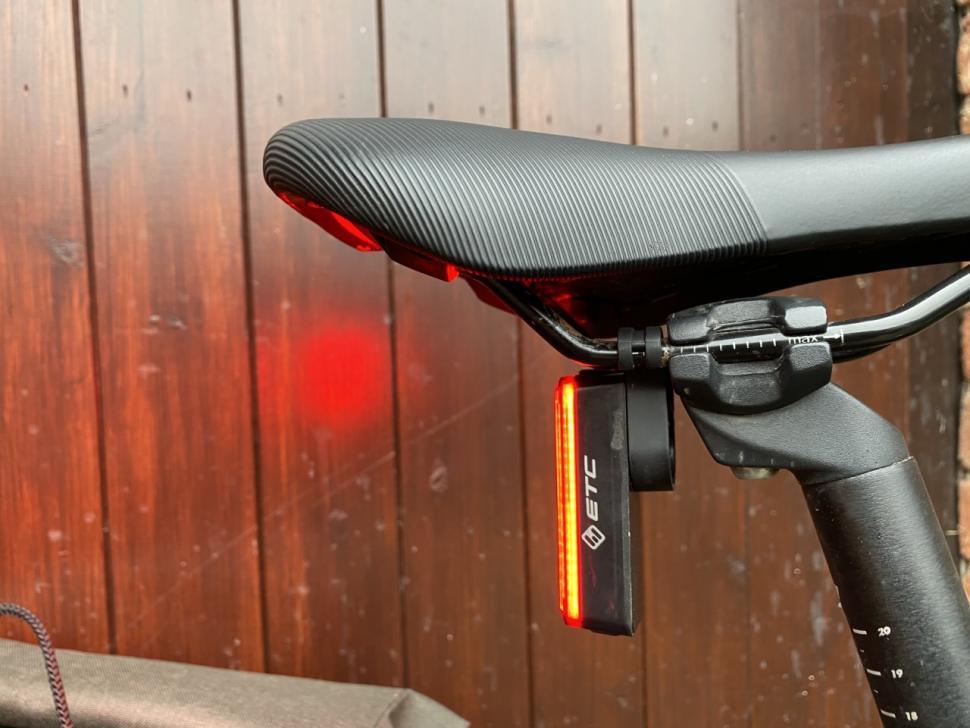 The light slots horizontally into both brackets and is secured with a twist and lock. I had no issues with wobble or play from either bracket (aero post excluded).

The lithium polymer 3.7v battery is charged via a micro USB port, with a cable included. It goes from flat to full in an hour, even when charged from my laptop. The indicator light turns to solid green to show that it's full charged.

The port's cover offers a good seal and I've had no problems with water getting into it. I've had it out in the rain, and left it on while washing the bike without issue. It doesn't look weak and I wouldn't be concerned about it breaking off over time. The unit is IPX6 rated. 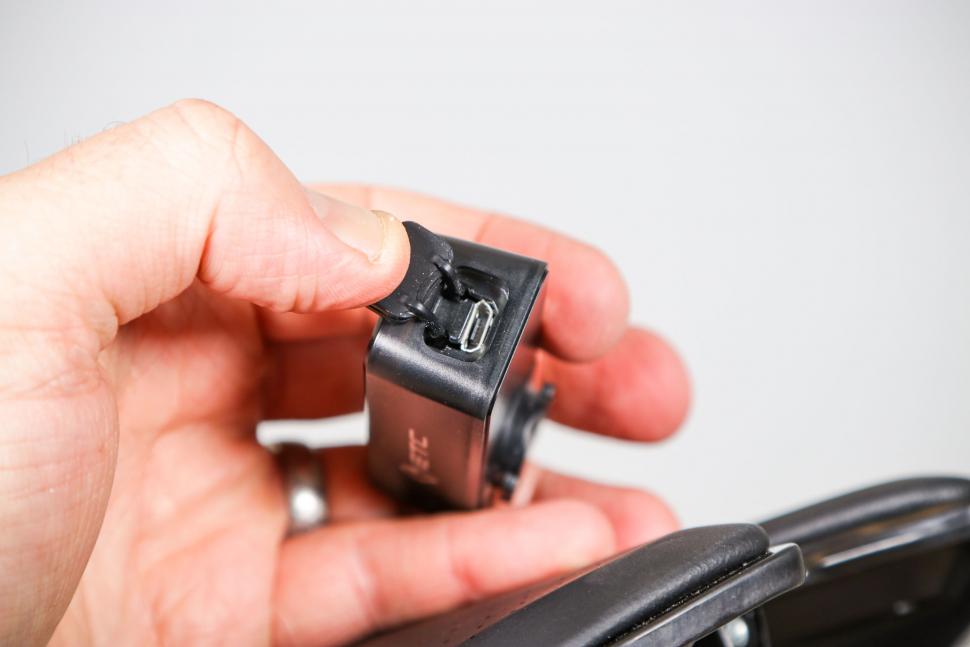 The button used to switch the light on/off and change between modes has an indicator on it. This is well placed and easy to see with a glance under your arm while riding (if not mounted on the rails). If it's flashing red, the battery capacity has dropped below 5%. The light also switches to a flashing mode if this is the case. When the light is off, you can check battery capacity with a quick press: green okay; red, charge it. The button itself is easy to locate and activate, even with gloved hands.

There are three steady state modes: Low, Medium and High. Run-times here are between 1hr 20mins and 3hrs 20mins.

Lastly, there are two smart modes: day and night, with claimed run-times of 18 and 3 hours respectively. Here the light will brighten and dim according to the surrounding light.

In smart mode, it's never achieved 18 hours – the most I've had is 14 – and I think it would be very difficult to have lighting conditions that would achieve 18.

This video shows you exactly what you are getting with regards to modes.

If you switch on the Rana's brake function, you get all of the modes described above, with the addition of the light sensing braking and subsequently brightening, then flashing for three seconds. This means run-times become variable.

I initially thought my urban commute was having the biggest effect – lots of stopping and starting for lights. However, I've established that it's simply very oversensitive, brightening when riding uphill and also on rough, pot-holed roads, which means there's no way to predict how long the battery is going to last. For example, in low steady mode, it's only lasted 1hr 50mins (down from 3hrs 20mins in normal mode); in breathe mode it's been as little as 50 minutes – down from 2hrs 20mins in normal mode.

It's such a great light in terms of brightness and rapid charging, but I've struggled with the unpredictability of the braking function. As others have mentioned in previous reviews of lights with this function, I am not sure if the technology is absolutely necessary on the road – drivers don't expect a bike to have a brake light, and I'm not convinced that having it will offer more protection than a standard light. I am convinced that I need a bright light, appropriate to the conditions, and the Rana is that, without switching on the braking function and riding round nervously wondering when it's going to go out.

The Rana is a great light in terms of brightness and charging, but it's difficult to call it good value when some of its functioning capabilities are unreliable.

Also, the Magicshine Seemee 180 is £8 less, and I can see no difference in the units. Indeed, according to its packaging the Rana is designed by Magicshine, and as Steve found with the ETC Sarin set, the silicone strap has Magicshine written on it.

Although it has an impressive one-hour recharge time, and modes and performance are very good – if you switch off the braking function – the Rana remains overpriced against its direct competitor; and performance and run-times when used with the brake function are disappointing.

There's no description on Moore Large's site. In short, it's a rear light with a powerful 180 lumen output, multiple modes (including auto brightness and a braking sensor) and USB recharging.

Get your head round taking it out of Smart Mode and you'll be sorted.

Great – very secure. Just a slightly short strap if you mount it on an aero post.

Output is very impressive, run-times are very reasonable too, though a few fell short. The braking function seems way too sensitive, so eats battery life and limits the light for rides of any decent duration.

Impressive output with reasonable run-times with the brake function de-activated. The braking function is way too sensitive, triggered by rough roads and long climbs.

Braking function aside, it's a bright, practical light. It charges super quickly and mounting options are good. Its capabilities with the brake function activated are vastly compromised, though, and the run-times can't be relied on.

It's overpriced when compared directly with Magicshine's version. Fabric's FLR30 is £29.99 and less powerful, but seems to have the braking function nailed. Lezyne's KTV Pro Alert Drive also has a braking function, for £30, but only throws out 75 lumens, while its higher output siblings, the Zecto Alert and Strip Alert Drive, are both £40 (neither as bright as the Rana 180).

Did you enjoy using the light? Out of Smart Mode, yes.

Would you recommend the light to a friend? No, I'd direct them to Magicshine.

The braking function is a real let down, and the price needs adjusting to be competitive. Otherwise, a nicely designed, bright light with a good recharge time.