8
10
Well-made, effective and bright light that lasts well between charges – and the price is great
Solid mount
Easy to use
Useful modes
Bright
Waterproofing a little weak
Weight:
37g
Contact:
www.moorelarge.co.uk
How we test

Almost everything you need to know about the ETC R65 65 Lumen USB Rear Light is in the name, except the fact that it's very good.

At full power this is easily enough to be seen in daylight – it's actually slightly uncomfortable to look at, even just bouncing the beam off a hand to check which mode you're on.

There are only six modes, cycled with a single press, so it's easy to choose. They're all useful, too. You get high and low solid beams, two speeds of flash, a mode that combines very fast flashes with bursts of solid beam, and a smoothly rising and falling pulse.

None have excessively long unlit pauses, and the big lens makes them all very noticeable. The lens shape gives a fairly good range of side visibility, too, which is great around junctions and roundabouts. 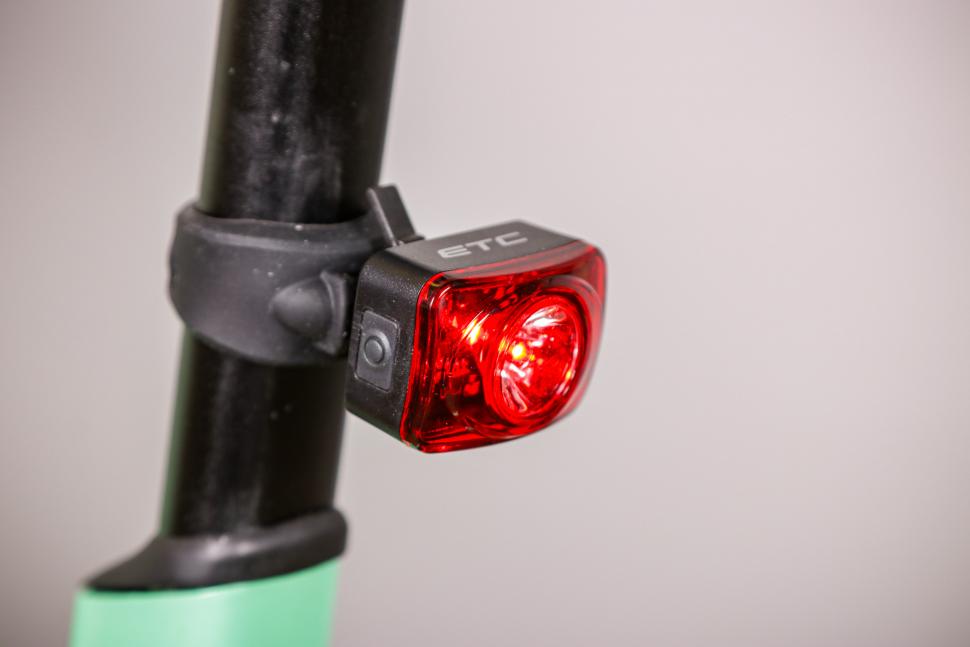 While at first glance it looks (at least to me) like one of the millions of cheap and unimpressive commuter lights out there, it's actually very solidly made, and a dependable choice for training rides day or night.

The clamp is very thick silicone that wraps easily to its sturdy plastic hook, and the mounting bracket adjusts for angle in a series of clicks. Both the band and the bracket are very secure once set. 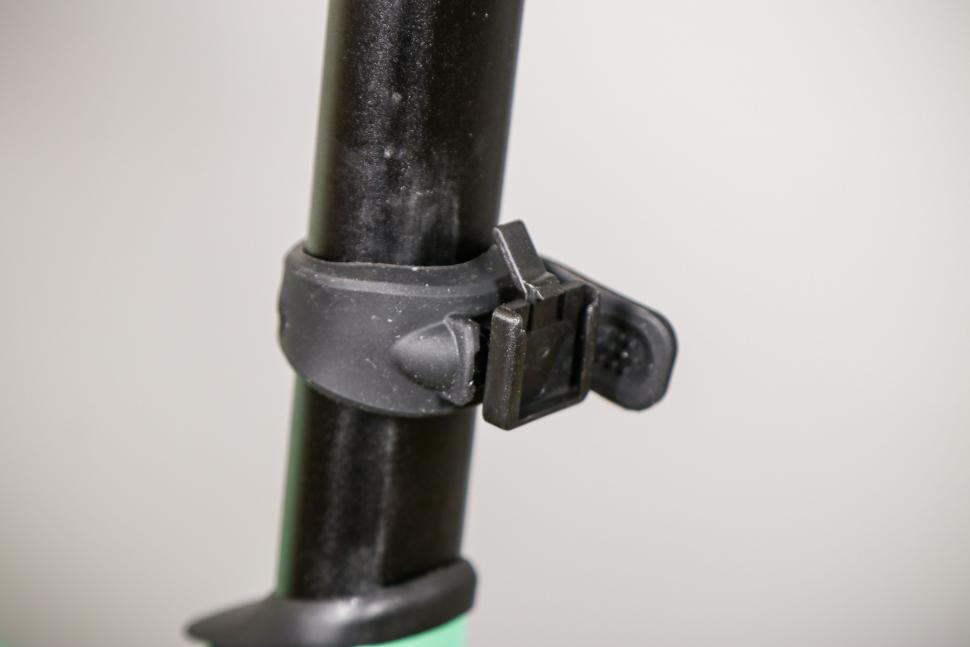 The light unit slots into the square bracket either horizontally or vertically, and locks in with a small catch. It's quite a tight fit that gets tighter as dirt gets in, but there's no need to separate them for fitting or charging, so it's not a big deal. 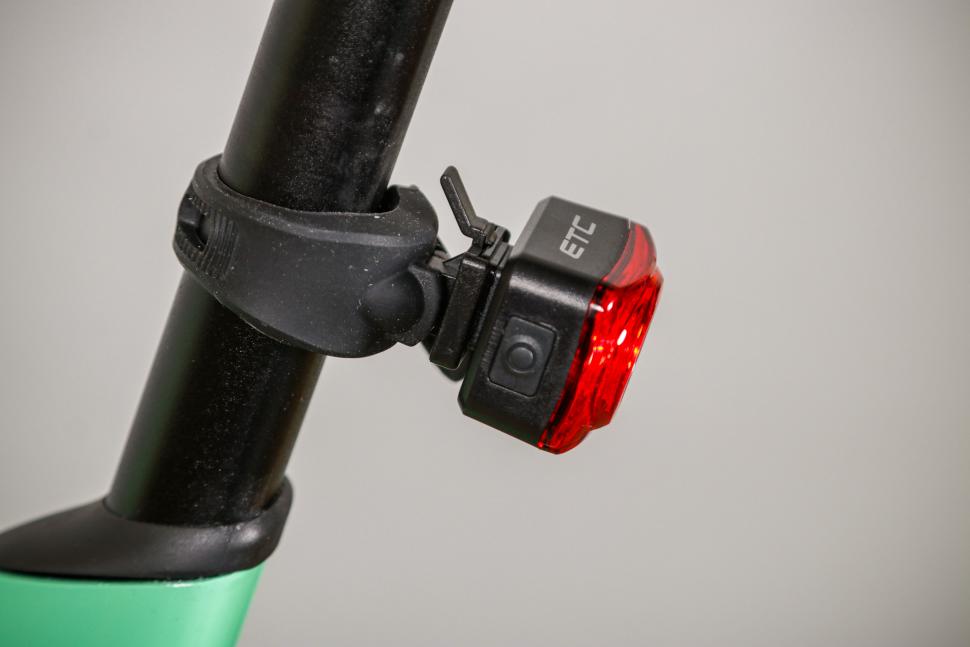 The single button is rubber sealed, and the USB charging port gets a thin rubber bung that flaps up and can't get lost. This is moulded to fit very neatly – both around the edges of the square 'door' and down into the port itself – and it's important to make sure it's snugged fully home. 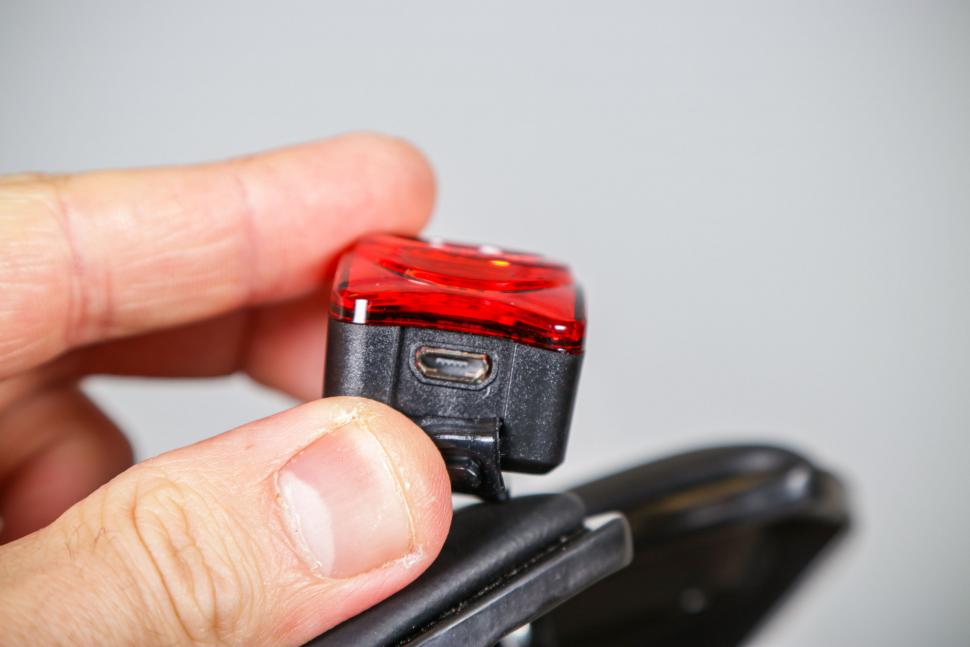 Running this light 'landscape', with the port on the side, I found evidence of water getting past the first part of the seal, though not the second or into the port itself. There is also enough inside the light body to condense on the lens when it gets warm.

This light's IP44 rating actually allows for that, so it's not failing ('limited ingress with no harmful effects'), and the 'evidence' I mentioned (namely silt) isn't unexpected either. IP44 only gives protection from particles bigger than 1mm. But it is a reminder to make the most of what sealing there is.

Running it 'portrait' puts the seal at the bottom and right in the firing line, but it does at least put gravity on your side.

Charging from flat takes under two hours on a 5V/2A charger (your phone one, basically), and the entire white central circle lights up green while it does it (it goes off once full). The 450mAh lithium battery lasts very well between trips to the wall plug.

ETC doesn't claim any run-times at all, but in solid 65-lumen mode it lasts around 90 minutes, and everything else runs usefully longer than that – flashing mode is easily good for a typical week's commuting, and unless you're running that full power solid mode it's dependably fit-and-forget rather than charge-every-ride.

Most of the lights we review are more expensive than £15.99, and of those that are close, few are as bright.

The Topeak Taillux 25 USB is £19.99 but is less than half as powerful, while the Knog Plus Rear Light is cheaper at £17.99 but again, far less powerful (and needs constant recharging). On the other hand, it's also very small and light at just 18g.

The Vel 20 Lumen rear light also has a decent angled mount, but once again is far less powerful, and this one has no IP rating at all. It's £20.

The ETC R65 USB Rear Light is surprisingly well made for its impressively low price, and does a good job night or day. Battery life is good too, and it's very user-friendly. Just watch the USB port cover carefully as the waterproofing is no more than adequate.

ETC says nothing about this light bar listing its specs. The name is a fair giveaway, though...

Functions 4 Steady - Flash - Off [it has six modes]

One button, one charging port. Couldn't be simpler.

Very secure and stable, plus adjusts for angle.

Rated IP44, so technically only splashproof. Remained unfazed by grim Welsh winter roads for the duration of the test, though a small amount of water has penetrated both the charging port seal and the light body (which is allowed by IP44 so long as it does no harm).

IP44 rating is relatively weak and a possible concern in the long term, but few (if any) lights at this price exceed it, and some don't even match it.

It's a very light light.

Very cheap for what it is.

Looks cheaper and clunkier than it is, water penetration is a concern longterm.

It's cheaper than most, while the specs beat most of those closest in price by a fair way.

The only thing this light could seriously improve on is waterproofing, but even then, IP44 is totally acceptable given the price. It's very good as it is – a higher level would just make it better.