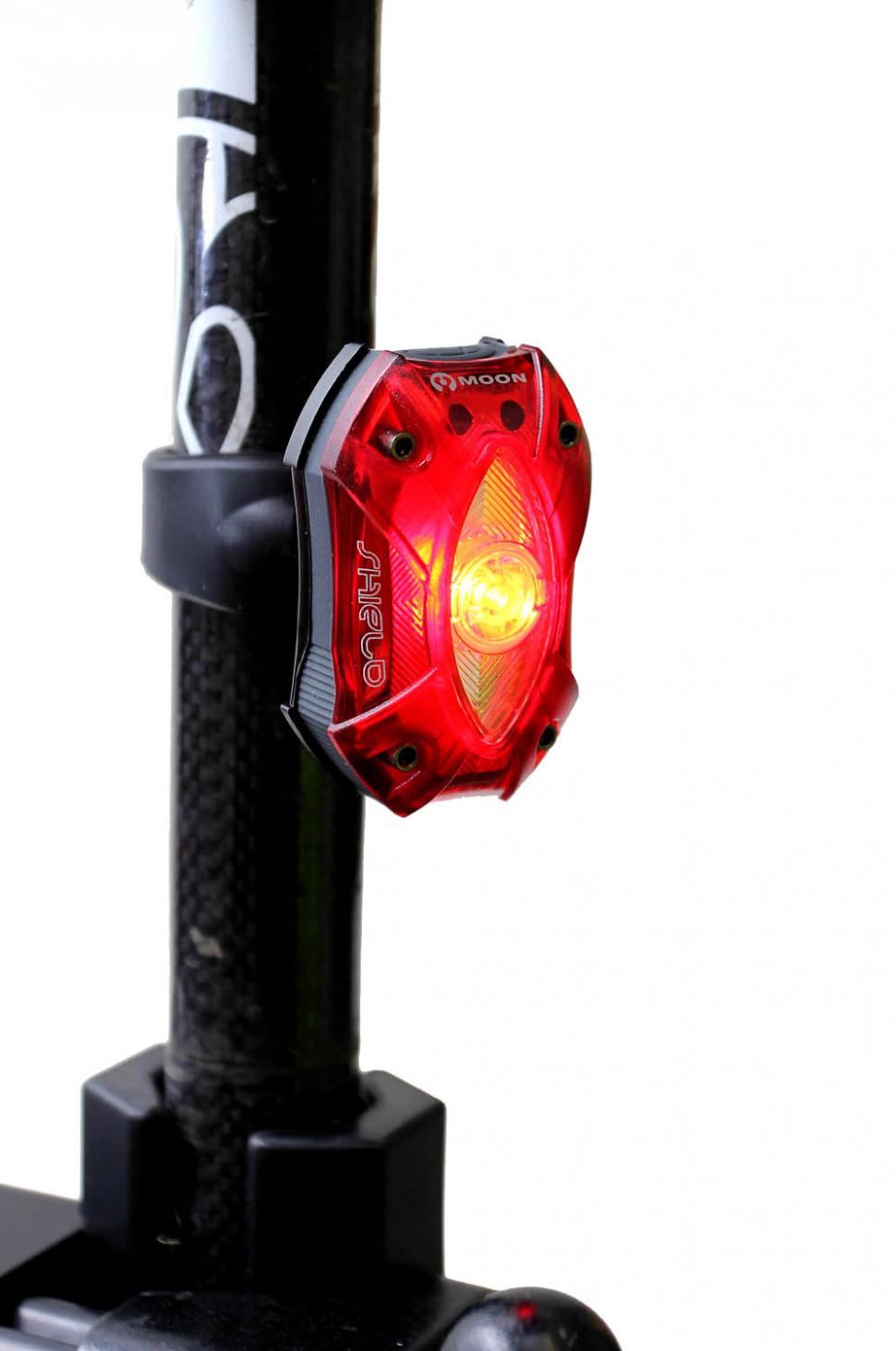 Unless that nice Brian Cox has led me astray the mighty Moonshield rear LED should really be called the Sun Shield, seeing as the Moon only reflects light, it doesn't kick it out in great strobing pulses with a disco flash.

When I collected the Shield from road.cc HQ I had initial misgivings - I'm wary of the tendency for high powered rear lights to become part of an 'us vs them' style arms race and the Moon has a whopping 60 lumens, which puts it firmly into 'battlefield nuke' territory. It's not quite as mad as the Dinotte 140 or the Hope District we tested a while back but it's still pretty darn ferocious and you'll need to be careful unless you want to be taken for a complete hooligan.

The Shield is neat looking and very solid, with a chunky rubber bracket. I'm a fan of these brackets because they make swapping between bikes a doddle and will accommodate pretty much any size of tube. Charging is via a USB port, another modern boon. The beating heart of this little sun is a single Cree XPE LED which kicks out 60 lumens. That's a *lot* of power for a rear light, as noted by the chap who commented (as he overtook me) that he needed shades to ride behind it.

All that power brings responsibility and you don't want to be angling this light up and into the face of traffic behind you. For the purpose of testing I stuck the Moon on my wife's bike so that I could see how effective it was. Sitting a couple of car lengths behind it was very, very bright, but I found that my front light provided enough of a counter that it wasn't hazardous or blinding. That said, she did have it angled slightly downwards. Tilting it upwards, or even straight, would be a different matter. I wouldn't recommend this one for dangling on a seat pack – you can't be sure it will sit at a good angle and anyway the clip isn't quite long enough to be secure and you don't want to find that £45 worth of rear light has dropped off somewhere back down the road.

There are five settings, three steady and two flashing, one of which is a trippy strobe. Staring straight into it while sat on the sofa (don't try this at home kids!) was weirdly calming although I did wonder if it was suitable for use on the road. In practice it was ok, although I do have a pretty high tolerance for flashing rear lights. I suspect that using it on a serious audax would reduce your popularity quite considerably, flashing rear lights not always being appreciated for group riding. Mind you, it's not really suitable for big night rides as the run time is pretty small for a rear light. Even the most economical setting will only get you 6 hours, which is where the ease of charging via the USB port comes in.

There are a few flaws. The weedy rubber USB port cover looks horribly flimsy. It's held up so far, which gets it the benefit of the doubt, but I won't be surprised if I end up resorting to a bit of electrical tape in the near future. Runtime, as I said, isn't great and you'll need to bring the light into your charging regime, along with the front. That might be the deciding factor in your decision to buy one or not, a regular AAA powered blinky will keep you safe and run for ages but it won't have the same attention grabbing power as the Shield. You do get a low power indicator, but it's a tiny green LED that is totally drowned out by the main light - you'd have to deliberately check because it doesn't exactly grab you by the lapels and shout 'PLUG ME IN!'

As mad rear lights go, this one is actually not so daft. You get as much power as you could sensibly use, built into a sturdy light unit that will fit almost any bike, can be recharged while you work and is impossible to ignore. It's a reasonable price too, around £35 if you shop around, which brings it close to the likes of the Cateye TL-LD 1100 which is utterly feeble by comparison.

Moon are coy, they don't say.

Very solid, but -1 for the weedy looking USB cover

Easy to use bracket, simple switch and five sensible modes. Loses a point for the feeble low power warning

Simple to use and versatile

Moon describe it as 'water resistant', which I assume is down to the USB port being a bit vulnerable.

Definitely a bit of a downer - max of under 6 hours

Super bright and impossible to ignore, no matter which setting you use

Again, loses a mark for that USB cover. Otherwise it's a very robust light.

A few flaws and you could ask if this much power is actually necessary - you could have two Smart 1/2 Superflashes for the same money - but a very nice light.