6
10
Quirky yet decent enough commuter front light but the integrated rear could be better
Weight:
94g
Contact:
www.moorelarge.co.uk
How we test

The ETC Sirrah 500 Lumen Front Rear Light is a quirky but generally competent helmet or handlebar light, with four sensible modes up front and three less effective ones at the rear. It comes complete with bar and helmet mounting kits.

On paper at least, the Sirrah seems to be a badge-engineered Magicshine Allty 500. Up front we have four modes. High is 500 lumens, medium 250, low 75 and flashing 120. The rear has three: one constant and two flashing, although their outputs aren't cited.

Both ends employ "wraparound" polycarbonate lenses designed to offer 180 degrees of visibility. However, the rear is a very slender window. 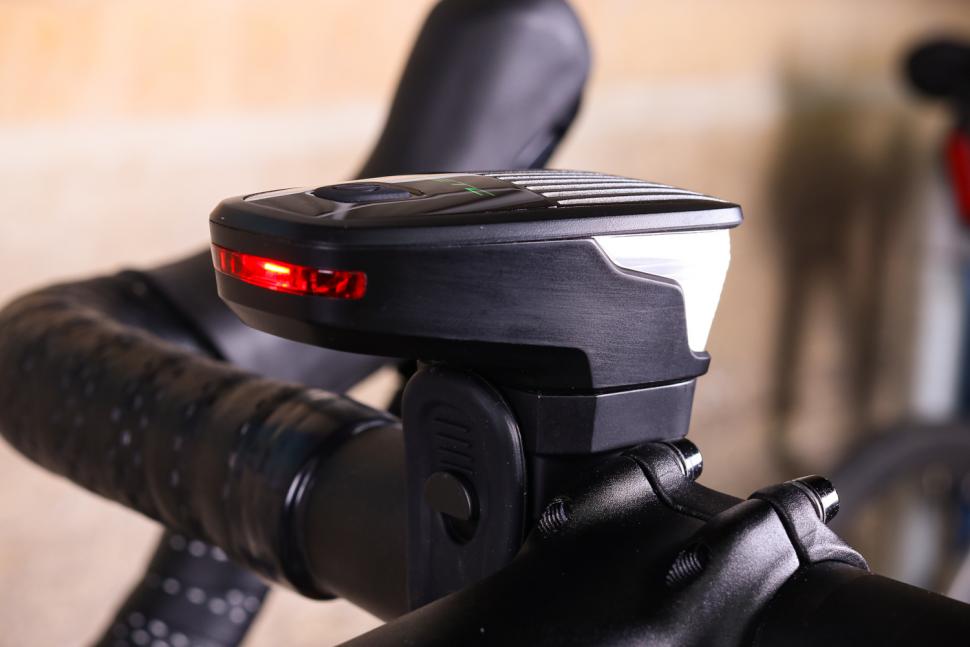 Inside the shell we have a Cree XPL diode up front; the rear's pedigree is unknown. Both are fuelled by a single rechargeable, 3.7v 1800mAh lithium polymer cell.

The aluminium top plate is essentially a heat sink, so coupled with cooling air, the diodes, switch gear and other sensitive bits should live long and serviceable lives. 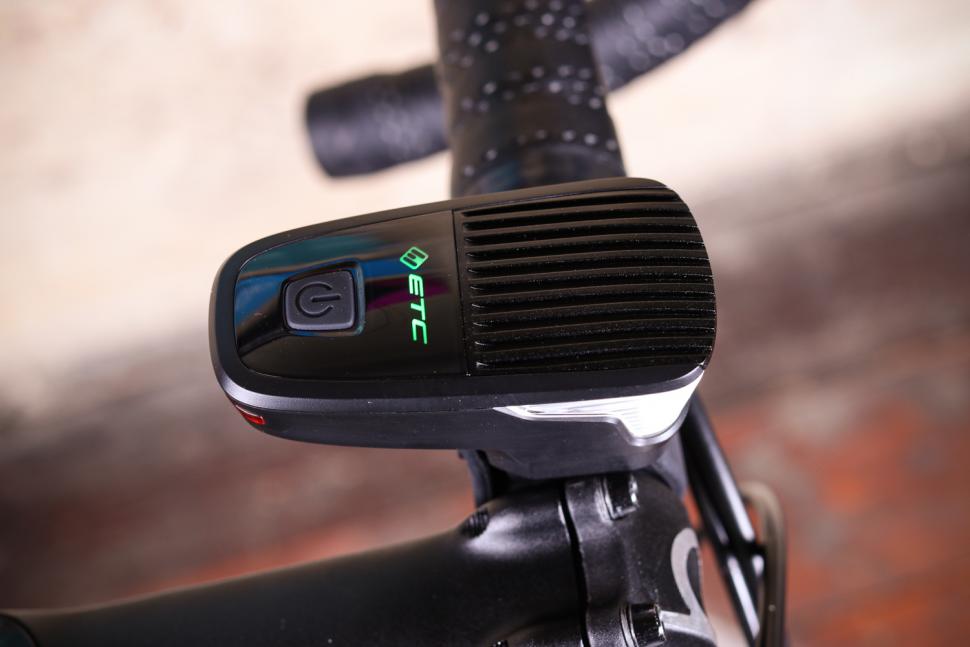 Talking of temperatures, I'm told it'll operate between -20 and +40°C, which should cover most bases. The battery is reckoned to have a lifespan of 500 charge cycles and refuels in around 90 minutes (mains) via micro USB cable. There's a familiar "traffic light" battery life/charge indicator: green denotes full, blue mid, and red low.

The switch is pretty straightforward and sensibly proportioned. A single deliberate press brings the light to life and scrolls through the modes. The rear is controlled independently by swift double presses. This takes a little practice before becoming intuitive. Either way, it's easily commanded wearing winter gloves, and to my surprise accidental power ups (in pockets, or panniers) have been a moot point.

The Sirrah employs a Garmin-style base and comes with a rubber handlebar mounted strap and an adjustable helmet mount. In practice, I've persuaded the bar mount to work with several helmets, which is just as well since getting (and keeping) the helmet strap taut was something of a mission. 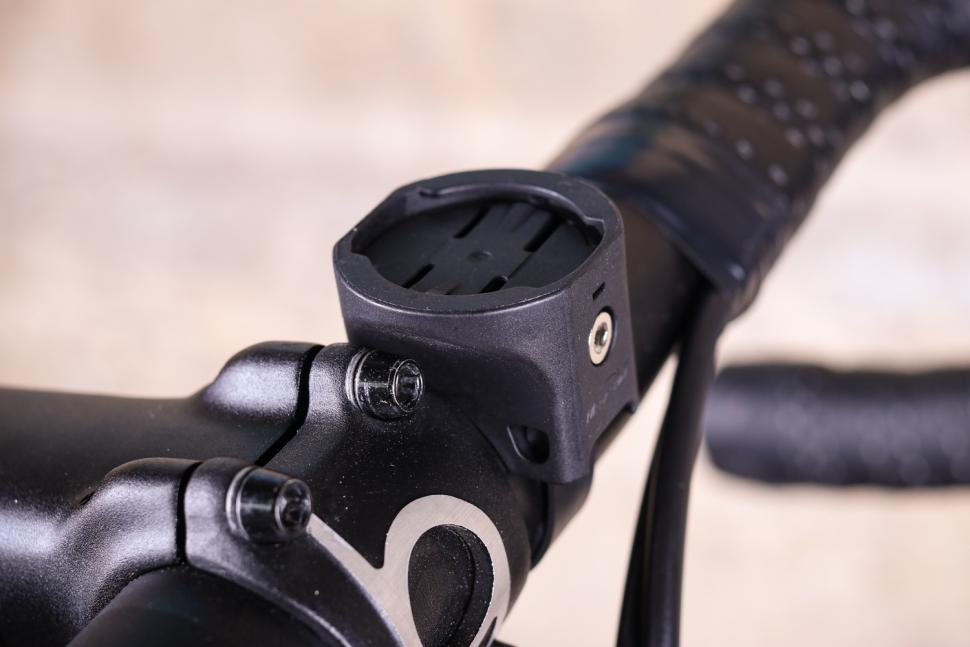 True to claims, the bar strap seems universally accommodating of aero and standard handlebar profiles. The watch strap design means effortless and secure porting between bars too, with no problems on 25.4, 26.0 and 31.8mm diameters.

Output is reasonable in the highest setting and the spot good enough for picking up the detail – holes, glass and similar debris – in semi-rural contexts, to around 15mph, a little faster on a clear night. The flood also gives a reasonable sweep, and seemed to hold the attention of oncoming traffic at around the 25 metre mark. It's a bit overkill for the suburbs, except at dusk.

A full charge is reckoned to offer 90 minutes. In practice, I've managed 1:24, dropping to 1:15 when run in conjunction with the rear light in its flash 2 mode. 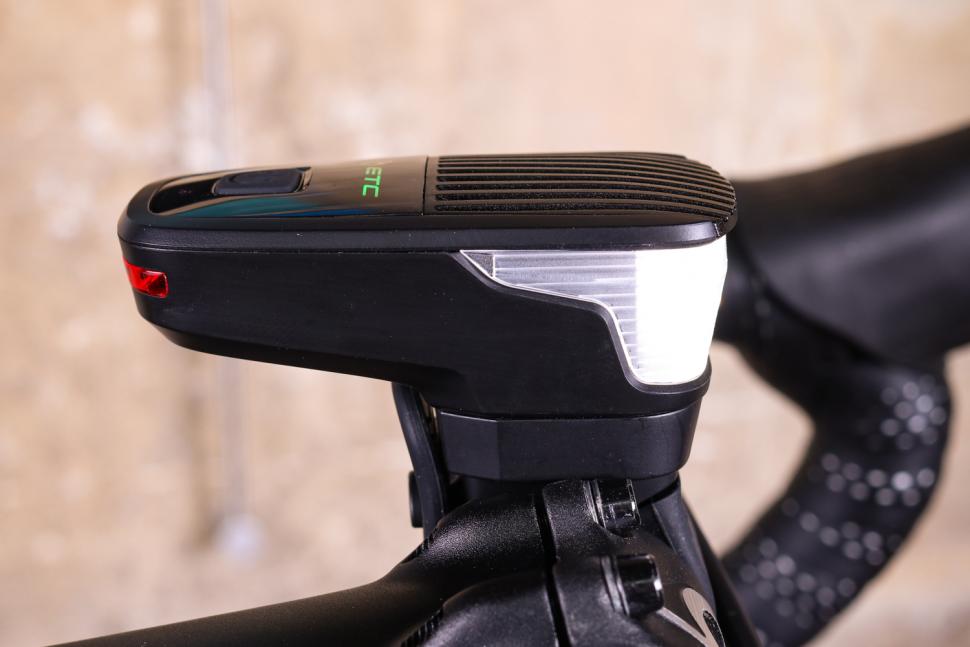 The mid (250-lumen) constant mode is pitched about right for built-up areas. The spot offers the necessary clarity for picking out tacks, glass and similar sharps, while the flood casts an arc that is useful for a general sweep of holes and similar potential hazards. Other traffic seemed to pick me out at about 20m, giving me enough breathing space when entering the flow of traffic, turning right and suchlike.

Helmet-mounted, paired with dynamo lamps (helmet or indeed rider-mounted lighting is not compliant with road vehicle lighting regulations), it's come in useful for reading place names, purging punctures and similar roadside tune-ups. On its own, I've achieved 2:45 from a full charge, dropping to 2:18, run in conjunction with the rear in flashing 2. 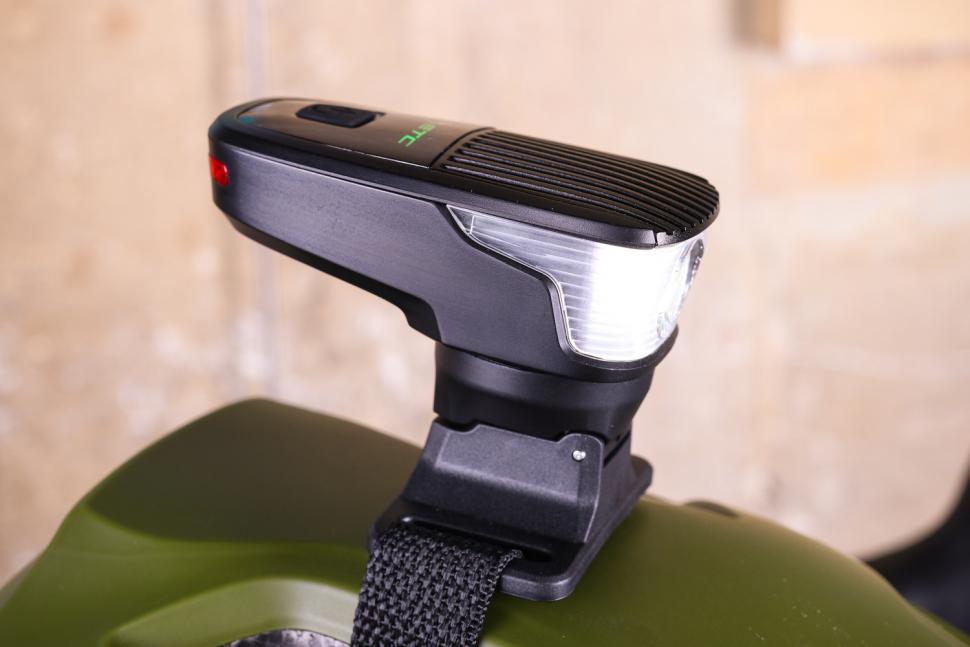 Of the two flashing modes, I've always chosen the 120 lumen over the 75. It's more effective but still sips reserves: 8:23 (8:30 official). This has also come in rather handy paired to dynamo lamps with less potent standlight functions. I've been quite surprised by how quickly it slipped from green to blue, but it's been a much slower slide to red.

The rear is most effective along unlit roads in the flashing settings. Though not without some merit as tertiary illumination in town, where it seems to align with driver eye-level, especially SUVs, vans and other larger vehicles, it does feel a bit like an afterthought compared with others such as the BBB ScoutCombo's more distinct and useful 10-lumen rear. This will depend on your priorities. If you want an all-in-one light for helmet or bar use, your options are narrower than if you went with separate front and rear. The ETC isn't badly priced, although you can get cheaper – Brightside's Topside is £29.99, albeit with a much lower-powered front light, and Moon's Aerolite COB is £34.99.

If separates is an option, for £52 I'd go for the Ravemen LR500S and Oxford Ultratorch Slimline R50. Not only is the Ravemen's spot better, the Oxford R50 rear LED is also very eye-catching and can be mounted on the bike and some lids.

The ETC Sirrah is a quirky light, with reasonable performance up front by genre standards and for town-biased riding, although the rear is of limited use. The lack of a daylight flash might also be a deal-breaker for some.

ETC feels this is self explanatory and skips straight to the specification. I would describe it as a mid-power compact light for commuting and more general riding. I like the integrated rear light in principle, but it's of limited use in practice.

Took a few attempts before the modes became intuitive but otherwise, no more or less complicated than most others. Don't mount it beside a wireless computer, as it has a tendency to block signals between sensor and head unit.

It's rated to IPX5 and has resisted some very heavy downpours, sudsy bucket washes etc without missing a beat, or signs of water/ingress.

Quite a useful front light for commuting/secondary/contingency use.

At 94g, 20g heavier than the official figure but unlikely to worry most riders.

Overall, the ETC Sirrah is a nicely made light with practical modes for commuting and general riding, something that may suit some riders looking to take their training rides beyond the suburbs. The 120-lumen flash has proven more effective than expected, though a day flash is becoming increasingly standard. Although I like the rear light in principle, it has been of limited use in the real world.

If you were happy with separates, for £52 I'd suggest the Ravemen LR500S and Oxford Ultratorch Slimline R50.

Would you consider buying the light? On balance, no.

Would you recommend the light to a friend? By no means a poor light, but I'd steer them towards the separate Ravemen LR500S and Oxford Ultratorch.

A quirky but generally competent light with four sensible modes up front, but the rear light has the potential to be much better.