7
10
Bright, sturdy and versatile headlight, but expensive – and the complex design needs refining
Weight:
270g
Contact:
www.extrauk.co.uk
How we test

The Topeak CubiCubi 1200 is a seriously hefty unit that throws out serious levels of light, making unlit country roads easily navigable. Its modular design makes battery-swapping easy and the mount is both sturdy and versatile, but it's heavy, expensive and not without niggles.

The CubiCubi is probably overkill for basic night riding, and certainly overkill for daytime use – though with its 1,200-lumen output, it's certainly going to show up no matter how bright the sun.

The reason is not so much the light itself, which opens up the dark country roads with good penetration, a soft peripheral spread and no dark spots, but the extras designed into the unit and its bracket. It's aiming to please adventure riders, bikepackers and tech addicts as much as basic road riders. 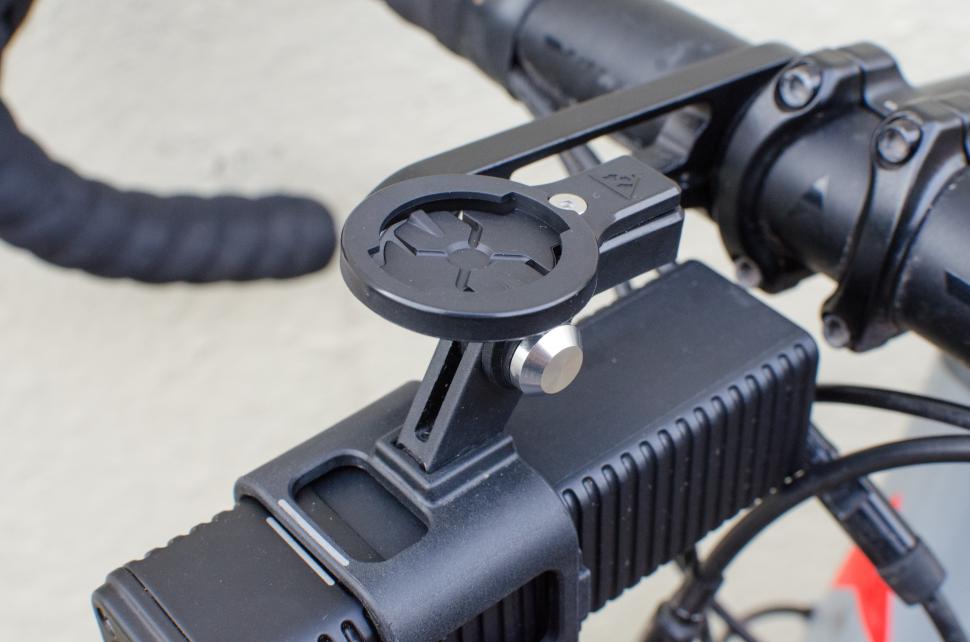 It starts with a very sturdy alloy mount that's more than up to holding the 195g light steady, and looks up to surviving a few crashes too. It has its own integrated mount for cycle computers, and extra cubes can be clipped to this one to hold secondary lights, backup batteries or GoPro's little Session cameras. 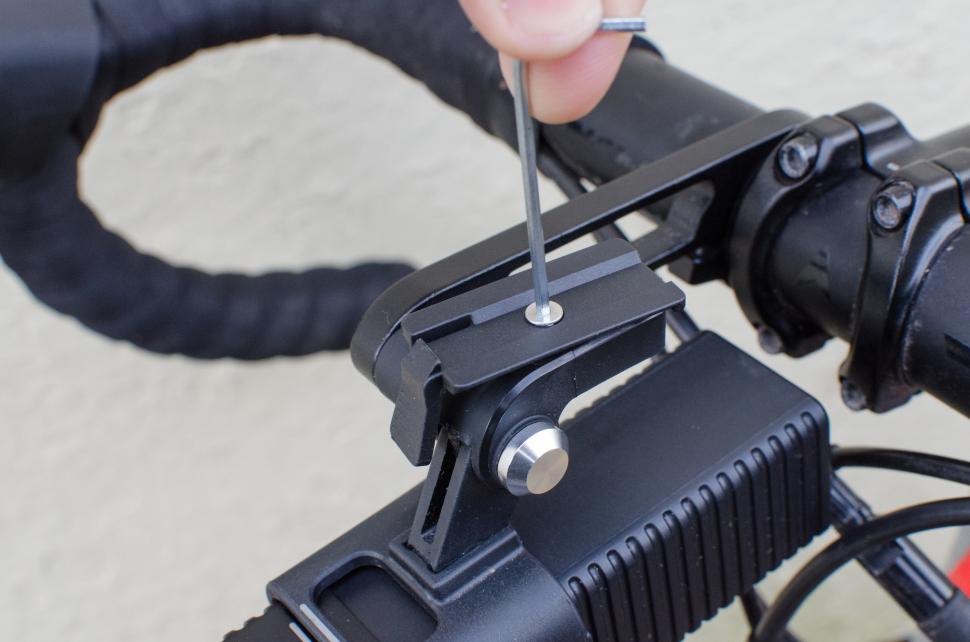 The plastic-cased battery detaches from the aluminium head to turn it into a powerbank, from whose full-size USB port you can charge devices including Android phones (for reasons of Apple's own it doesn't work with iPhones). 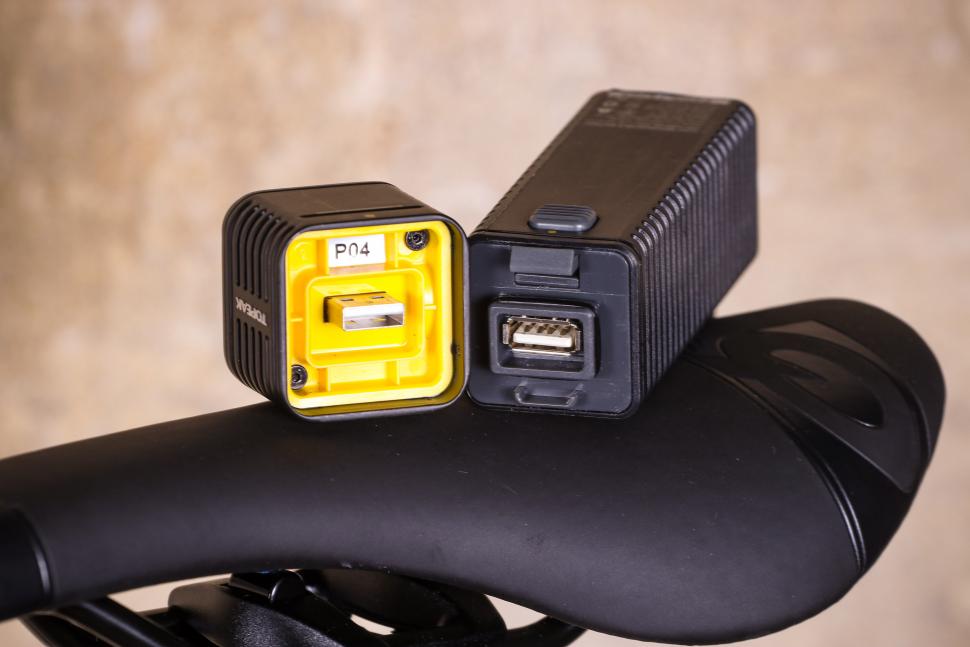 You don't need to dismantle it for charging the 3.7v Li-Ion battery – which takes a reasonable 4-6 hours with this long-running 6000mAh battery – as that's done via a waterproofed micro USB port on the rear. 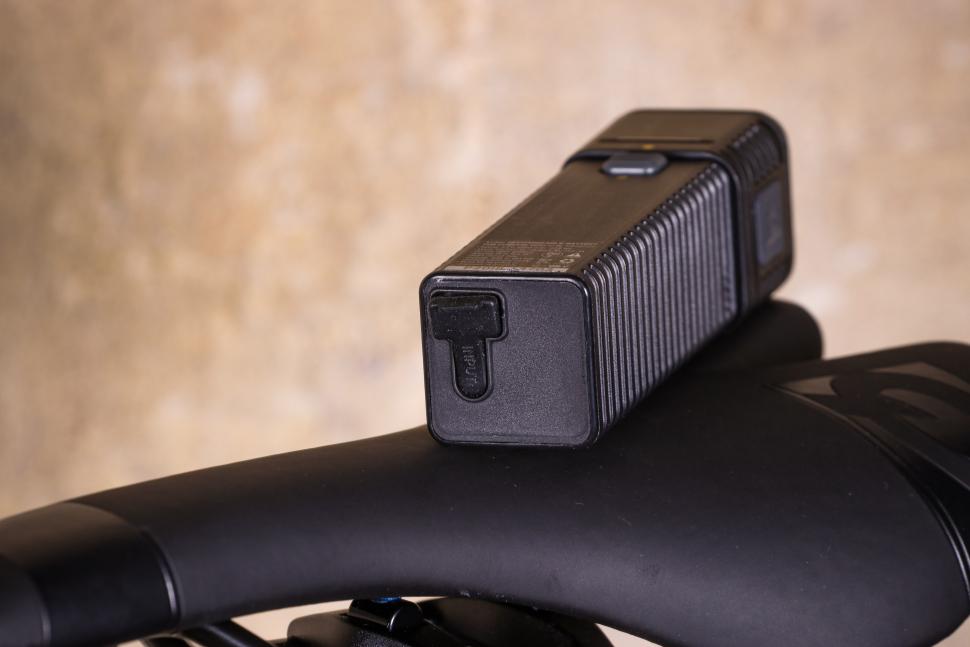 Topeak's claim of 2.5hrs on full power proves fairly accurate, but you can switch between four other modes to extend the life: 4.5hrs at 600 lumen and 30hrs at 100 lumen, or 60hrs flashing at 100. Unfortunately, the CubiCubi falls into the common trap of forcing you to click through every mode to get back to the brightest setting, which can be seriously awkward and leaves you not wanting to adjust it. The long mount also means the button is a stretch to reach.

It's fairly easy to tell how much juice is left thanks to the four-LED readout on the side, which a short button press will activate (it's on constantly in use). It's not perfect, however, as internal light-leaks make it a little unclear how many are actually lit, and if you orientate the torch correctly (more on that below) the readout's on the side and obscured by the bracket unless your eyes are physically level with the lamp. That means stopping, or putting your head under the bar as you ride. Your choice. 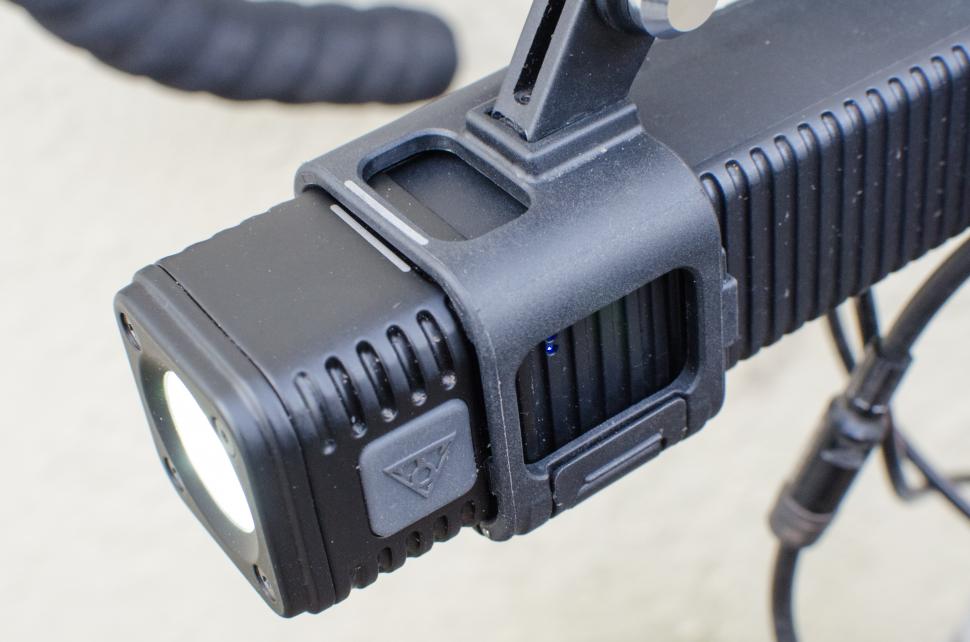 You can get round it by fitting the torch a different way round (life hack!), but the hole in the bracket is smaller on top and slightly obscures one end of the readout. Also, there's no way around one daytime issue, which is that you can't see if it's lit or not without pretty much going over the handlebar. A small tab of lens reaching over the housing (as seen on many cars) would let you check at a glance.

Getting the light into the bracket is fiddly thanks to the ribbing, but it's very secure once in – so long as you seat it in exactly the right rib (there are clear alignment marks). Leave the head sticking out and it could fall off – Topeak warns against this – though the fit is tight and there's a pretty secure internal latch. You'd be unlucky to lose a head, but the design means more parts, seals and gaps to potentially fail in a crash/rain, plus the need for yet more alignment marks. Also, if there's only one correct position, why are the other ribs even there? 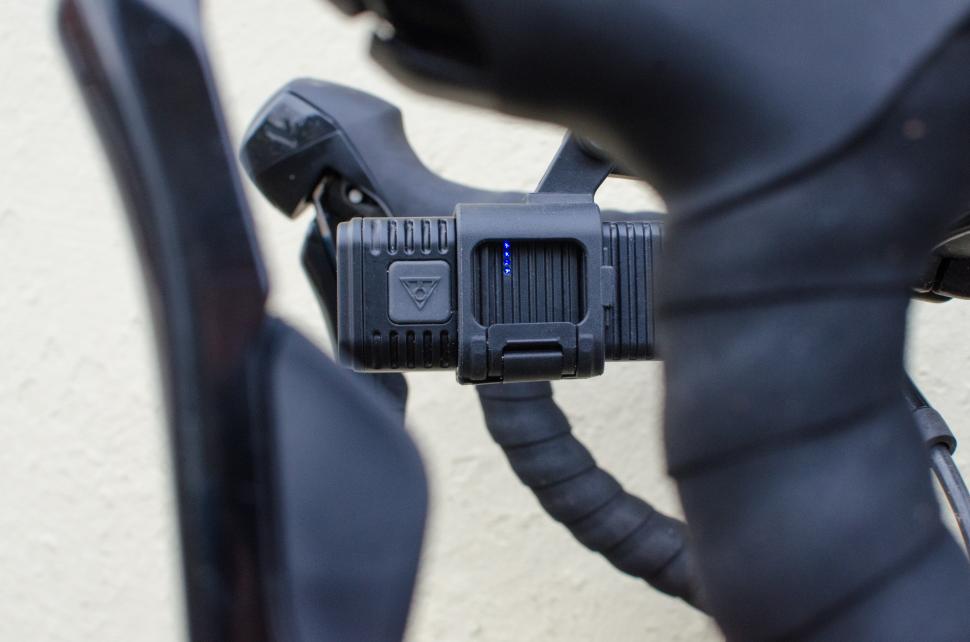 On that note, and after some confusion, we began to suspect the design had actually changed very late in the process. Topeak confirmed it: the bracket was designed to hold the lighthead only, which is why it fits that section perfectly – as shown in the photo below – and leaves the power button and logos exposed neatly in the cutouts. It also leaves the battery indicator fully exposed. 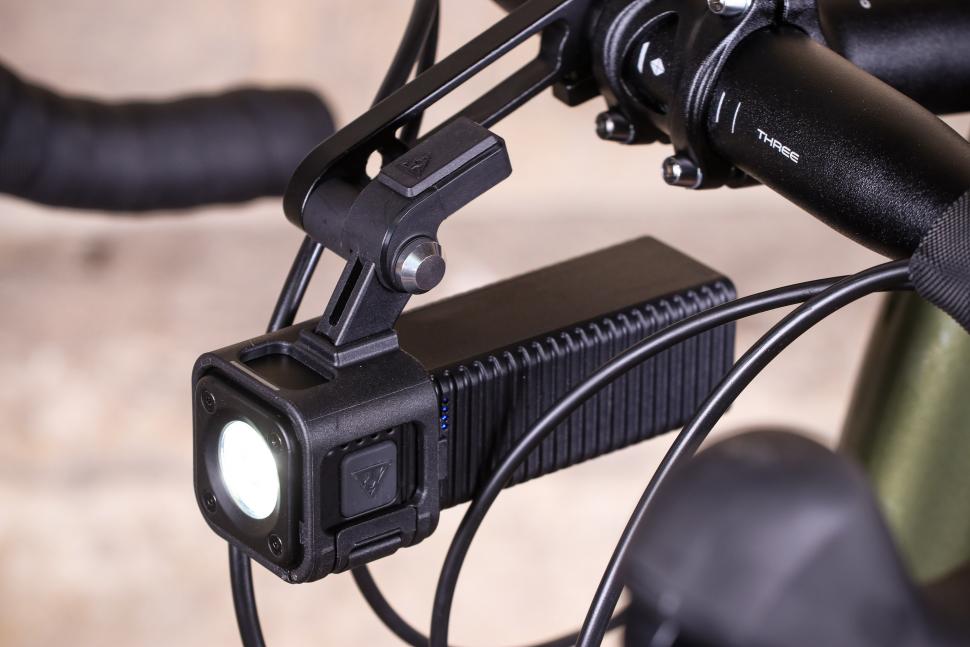 Early customers had issues with batteries drooping under their own weight, however, with an unfortunate natural ‘separating effect’. So Topeak added a second element to the latch and updated the mount positioning. The changes have certainly worked to make it secure, but it’s an untidy fix – now, the only button in the cutout is the one to separate the two halves (which of course can't work with the clamp there), while the battery indicator is slightly shrouded. It's hard to see it as much more than a bodge. 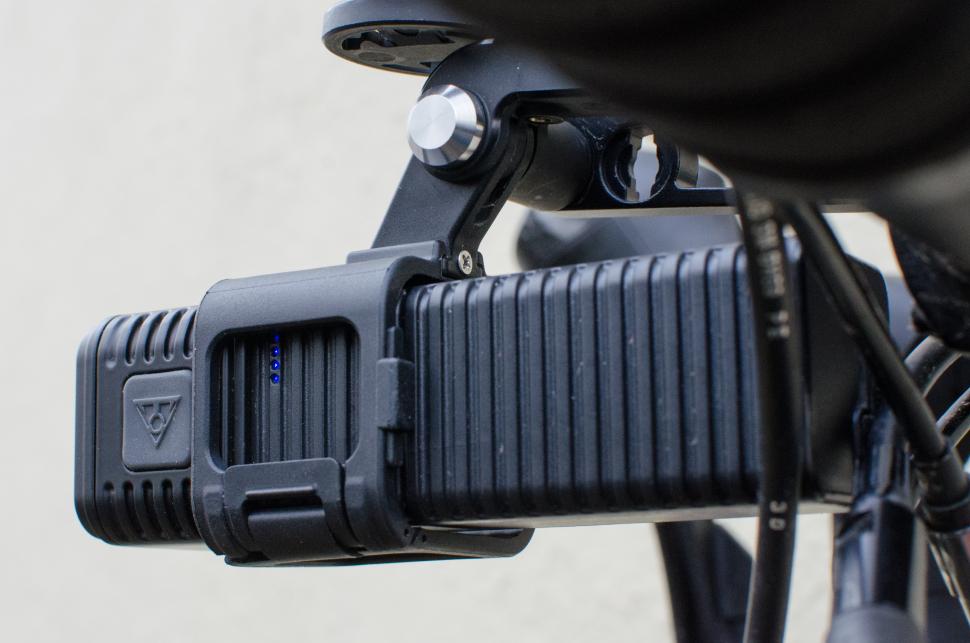 The CubiCubi is rated IPX6 for waterproofing, which is very good, and means it can withstand having 100 litres per minute jetted at its entire casing for three minutes (a test otherwise known as 'riding in Wales'). Certainly I had zero issues with water ingress while riding in Wales. It's also dustproof, but I can't test that as we don't have it here.

One thing the removable head is good for – beyond adding complexity to the lamp and mount – is making backups cheaper. Topeak sells the batteries separately in 6,000, 3,000 and 1,260mAh varieties, and not having to buy the Cree XLamp XHP50.2-equipped lighthead again is helpful if you're going long and looking to pack spares. 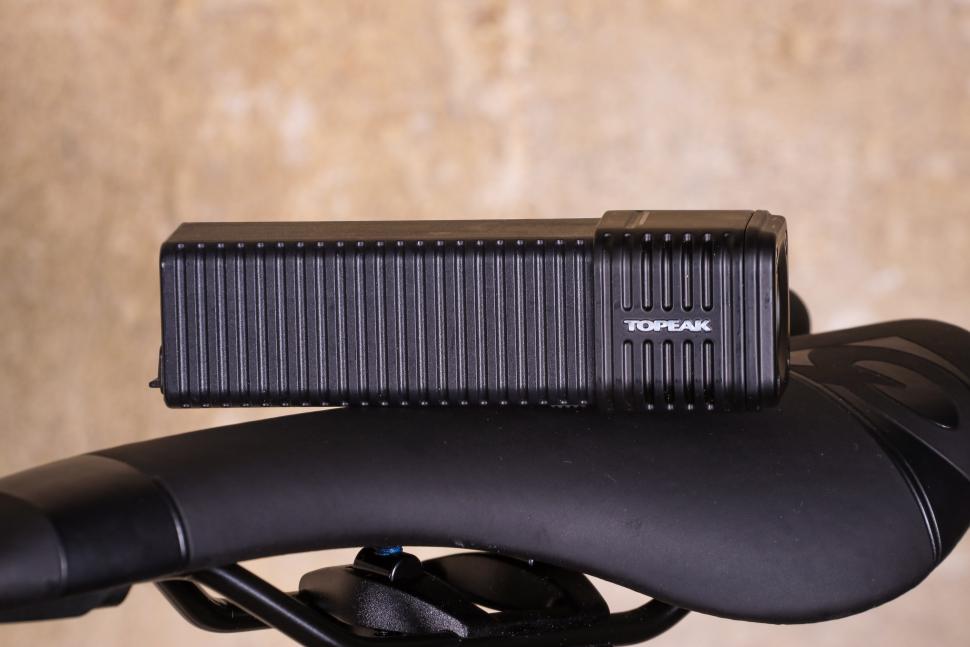 Certainly you're not saving much weight by only carrying one lighthead, as it accounts for just 57g of the total (which is less than the bracket).

My biggest concern of the whole multipart assembly is that the cube section is held onto the handlebar bracket by one really tiny (6x2mm) crosshead screw. Lose that and the bracket is free to slide off. 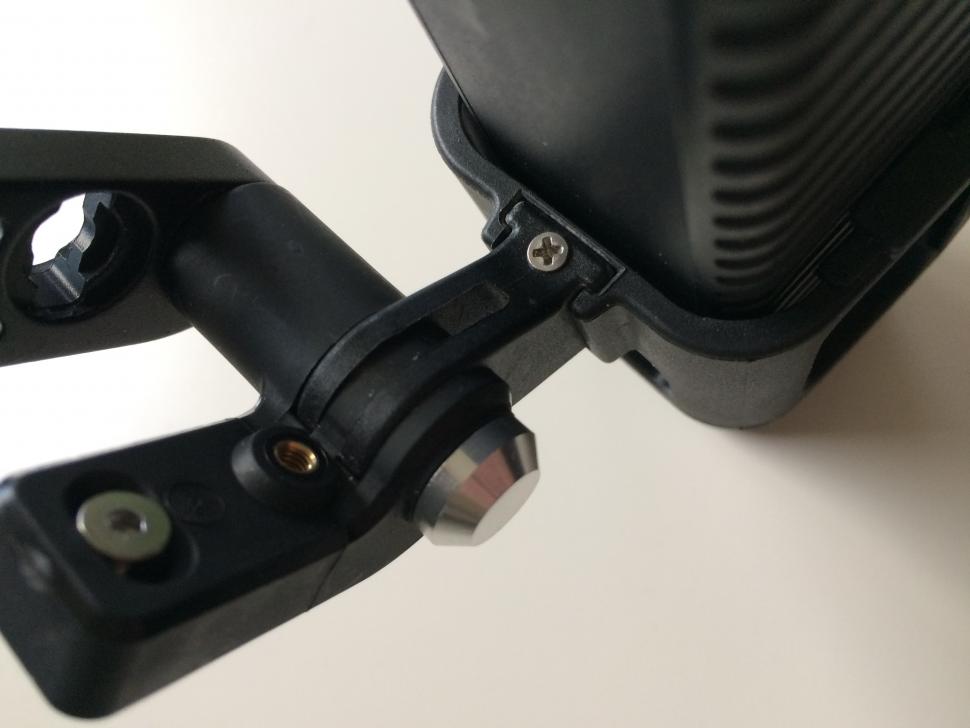 Also, while the integrated computer mount comes with three fitments – Garmin, plus Topeak's own RideCase and PanoComp X – there's nothing for any of the other popular brands.

If it's just lots of light you're after, there are simpler and cheaper ways to get it. Lezyne's Macro Drive 1300XXL is £85, for instance, and tops or matches the CubiCubi for performance (if not for solid bracketry). And while the £80 ETC Kochab is 'only' 1,000 lumen, it's still plenty bright enough for fast road riding and pleasingly simple to boot.

But with its modular design, support for other devices and expandable bracketry, the CubiCubi is offering more, not least the versatility to venture (at length) onto gravel and rough trails without dipping into a full-on, burly off-road flamethrower: see Exposure's £385 Maxx-D, for example. If it's this kind of all-round, big ride use you want it for, the CubiCubi's value is higher.

Overall, it's a bright, robust and feature-packed light with scope for carrying other lamps, batteries, computers and action cameras on its sturdy bracket. Compatibility is limited to a handful of devices, however, and design errors have led to a product that’s a little fiddly and awkward. Once securely assembled and attached, though, it's a powerful and dependable headlamp.

Bright, sturdy and versatile headlight, but expensive – and the complex design needs refining

A bit of a faff to unbox and fit, but easy enough once it's all together.

Ultimately provides a steady, secure platform, but design issues mean it's a bit of a bodge.

Lasts well, and charge time is about average for a battery of this power and duration.

Very bright and steady on its mount.

Feels sturdy enough for gravel and trail use too.

On a pure lumens per pound basis, the price is high and value is low but it does have some extra capabilities, so gains a couple of points (more if you own a GoPro Session, a Garmin and an Android phone already; less if you have a Hero, a Wahoo and an iPhone).

It's bright, has a good reach and feels dependable.

Heavy, fiddly design, won't take my Lezyne GPS... plus the mount involves a 6mm crosshead screw, the failure of which would bring it all crashing down.

Bears a premium of £30-£40 over simpler lights of similar power.

With simpler shaping, security that doesn't depend on one 6mm screw, and wider computer mount compatibility, this would be an eight. As it is – and with its high price – it's just good and a seven.

I regularly do the following types of riding: general fitness riding, mountain biking