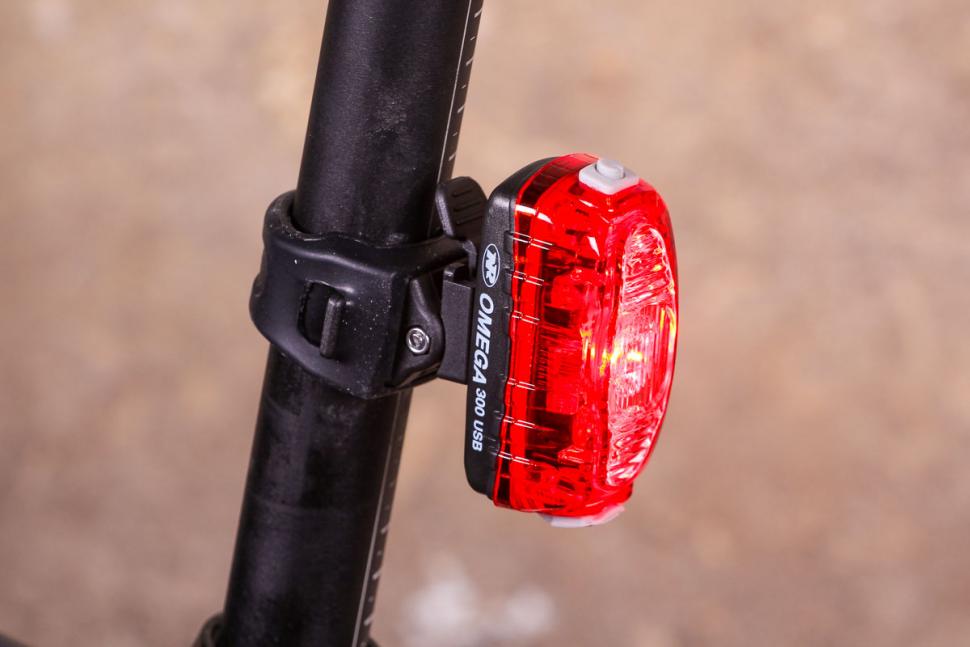 5
10
A very bright light with good burn-times let down by poor weather resistance
Weight:
53g
Contact:
www.zyrofisher.co.uk
How we test

Continuing the trend for daytime running lights, NiteRider has created the insanely bright Omega 300. You'll stand out from a fair distance on even the brightest of sunny days, although there plenty of other modes should you want to use it in different situations. Unfortunately, disappointing water resistance and burn-times that are nowhere near those claimed mean this light is a bit of a damp squib.

I've been using a rear light on my bike for most rides over the last year or so especially as I have quite a few bright ones – 80+ lumen – in my possession, so was really looking forward to testing the NiteRider. Its most powerful Daylight Visible Flash mode puts out 300 lumens, so you are definitely going to stand out against the backdrop of traffic and other clutter.

On quite a few rides I did notice a much lower number of close or crap overtakes, though I can't say for sure that this was down to drivers noticing me earlier and having more time to deal with it...

This mode is literally only for the brightest of days, though, as it is very bright. Even using this on gloomy days could be considered antisocial to drivers behind.

The light attaches to the seatpost with a rubber band style fixing, which holds it securely and stops it spinning around. You can adjust the angle by undoing the screw on the side, set the light up and then tighten. This needs to be absolutely murder tight – I found after quite a few rides I'd return home to see the clamp had vibrated loose and the light was pointing at the floor. I eventually got it tight enough, but I had to really screw it in.

The biggest issue, though, came on my first wet ride. The rain wasn't exactly heavy, more heavy drizzle, but earlier heavy rain had seen a fair amount of standing water on the road.

After about 40 minutes, the light conked out and on closer inspection it was full of water, even though the rubber cover had been closed firmly. This will lead to internal corrosion eventually.

It doesn't help that the charging port is on the bottom of the light, right in the firing line from road spray if you aren't using mudguards. A much better design would be to have it on the side or the top.

On a second similar ride the light filled with water again, but although it stayed working the whole time, it wouldn't switch on again after I'd turned it off.

Both times it dried out on top of the radiator and worked again, but it's not exactly I will continue to use or trust.

Its official rating against dust and water is IP64. The first number is for solid particles and grade 6 is 'dust tight', so no issues in the summer.

As for liquid ingress, the grade 4 means it should resist splashing water from a spray nozzle for 10 minutes, so technically it could possibly achieve this out on the road, but it is why most manufacturers aim for at least IPX6, resisting powerful water jets.

Each time the light had got wet and dried out, the battery life was all out of whack, showing a red LED to say that the battery was below 20% capacity (above this it is blue).

After a full charge (about 2hrs 15mins, which isn't bad) I tested the quoted burn-time of 6hrs for the daylight mode and achieved just 2hrs 30mins the first time, and then two attempts at around the 4hrs 15mins mark. The next two tests achieved 5:50 and 5:55 as it continued to dry out.

I have always found NiteRider to be pretty good on its claimed burn times, so I'm putting this down to the water ingress, and as the light hasn't got wet since, it's been holding them.

The Omega does have a few other modes as well as the Daylight Visible Flash setting.

NiteRider doesn't go into details about the lumen output, on its packaging or website, but the second mode, which uses all three LEDs in an almost strobing pattern, is noticeably less bright, about half as much I reckon. This will last 8hrs.

Next is a pulsing mode which will also last for 8hrs and is quite eye-catching. The top and bottom LEDs are on when the middle one is off and vice versa.

You also get two solid modes: a brighter one that will see the battery last 5:30 and a Group Riding Mode which looks to be about 30 lumens or so, so as not to be too distracting. This'll last for 30hrs.

One thing I do like about the light is that the size of the lens and how far it wraps around the light gives plenty of side visibility.

When it comes to value, the £45 price tag looks pretty good considering the numbers like output and burn-times. The Blackburn DayBlazer 125 can't compete on either, offering about half of the power and battery life. It is rated to IP67, though, so is suitable to use in pretty much every winter weather scenario you can imagine.

For 50 quid you could get the Lezyne Strip Drive Pro 300, which puts out the same high powered daytime flash but has a much shorter battery life. The review does state that it can stand up to being used in the wet.

Overall, if you're a fair weather rider or you always ride with mudguards then the Omega could be a good choice, especially for daytime use, but for peace of mind I'd go for something that is better at dealing with the elements.

"In 2012, NiteRider launched an awareness campaign 'Lights 4 Lives'. The overriding goal was simple; spread the message of using lights not only during the night, but equally important, during the day for added safety and visibility. And the Omega™ 300 is the epitome of NiteRider's safety initiative."

I like the light's performance but it's not really ideal for winter weather conditions.

The Omega™ 300 is backed by NiteRider's lifetime warranty that covers any defects in mechanical components (housings, covers, mounts and fasteners) and LEDs.

Very simple to turn on and scroll through the modes.

The angle adjustment screw needs to be done up as tight as you can get it to stop movement.

Rate the light for waterproofing. How did it stand up to the elements?
1/10

NiteRider claims that this is IP64 rated, which is basically water resistant. Water enters the light, getting past the rubber bung covering the charge port pretty easily, so it's not suitable for use in the wet.

When the light was fully dried out it achieved the burn-times claimed by NiteRider. Charging is quick at just over two hours.

Rate the light for durability:
4/10

If you use it in the wet, especially when there is salt on the roads, the internals will soon get corroded.

If you want to be seen whatever the conditions then there is a mode to suit.

Can't use it in the wet.

It's about right for the outputs, compared to others on the market, but doesn't have the water resistance of some, though it does have impressive battery life.

Did you enjoy using the light? Yes, in the dry.

Would you recommend the light to a friend? Maybe, if they ran mudguards.

It's a decent light but has a few niggles, and while the water resistance matches that of the rating it's not really ideal for typical British weather.