7
10
Capable compact light with some nice touches and better build quality than I'd expect from this pricepoint
Weight:
112g
Contact:
www.bob-elliot.co.uk
How we test

The Ravemen CR500 front light is a quirky but clever compact torch design that produces a maximum of 500 lumens and has a host of settings. It's ideally suited to suburban contexts and offers decent run-times between charges. Several small but significant features set it apart from outwardly similar models.

Dave and Rob have already reviewed a couple of Ravemen options higher up the food chain – the PR1200 and PR600 – and were impressed. The CR500 is a different beast, though it does share some of the same features, such as the useful remote switch. 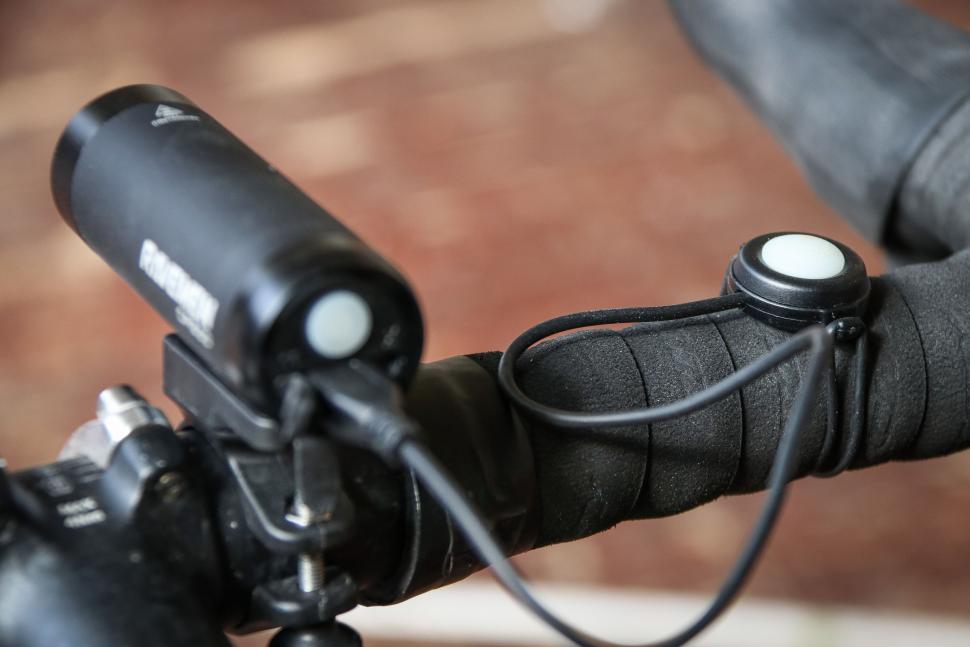 The setup is a Cree XP62 LED projected through a dual beam lens. This is a hybrid of flood and spot, giving plenty of presence while still allowing you to pick out the detail – potholes, lumps, bumps and similar hazards – from a reasonable distance.

It's also designed not to dazzle other road users – a problem you can get with the retina-scorching auction site specials in comparable mode, but less of an issue for mainstream units of this kind.

Upon powering up for the first time, I was slightly disappointed by the black line separating the beams. While this sort of imperfection would irritate me while trying to tackle pitch black roads at full pelt, that's not really what this type of light is primarily designed for. The slight imperfection was something I quickly adapted to and largely forgot about.

The hybrid beam casts a broad arc, which seems to achieve its aim of being assertive, rather than aggressive. Unleashing the full 500 produces just enough bite for tackling rural roads at 20-odd mph and spotting holes, glass, dung and similar hazards with relative ease and enough time to react. (With higher power systems I often find myself dancing an elaborate tango, trying to avoid frightened and very unpredictable rabbits. These and other woodland creatures tended to stay out of the arc of light and, thankfully, my path, which was another welcome surprise.)

Car traffic seemed to acknowledge my presence (by dipping headlights) at 60 metres or so – and riders suggested they could spot me from 200m on clear to moderate nights. Though powerful, it's not a daylight mode in the sense of the Cygolite 450 which can really cut it, even on bright days.

Despite the relatively small battery, it has consistently delivered within 4 minutes of the 90 minutes cited for the high setting.

Medium is arguably overkill for town but about right for navigating the suburbs, and good enough for being seen on rural roads – handy for those occasions when you're hitting dusk but need to conserve some juice.

In built-up contexts it's all about being seen, and once again, that broad arc gives surprising amounts of presence. I wouldn't say it made any difference to drivers' passing distances, but even without a backing blinkie I felt more conspicuous at junctions, roundabouts and when entering the flow of traffic generally. It's good for the three hours quoted, which isn't amazing but certainly on par with others of similar spec I've been testing recently.

Personally, I prefer a few more lumens, but thanks in part to the arc, that low 100-lumen setting will cut it through well-lit town contexts and shared use paths, delivering 7hrs 25mins from a full charge. The 50-lumen eco mode extends the run-time to 16:30, and is more powerful than numbers might imply. The ridiculously generous run-time is hard to ignore, but I'm not convinced I'd want to run it as an everyday mode, even in well-lit towns, although paired with a blinkie it could be a lifesaver.

Pulsing flash is quoted as 100 lumens and in the same contexts seemed to give other road users a better gauge of my speed, thus overtaking/similar manoeuvres appeared better timed. Visibility is to around 250m along unlit roads, 160m through the concrete jungle. I've timed 14hrs 54mins from ours, fully charged.

Fast flash will certainly make your presence known; its 50 lumens is still good in the seen-by sense in every context and compensates for the lack of side windows. To date, I've only done 16 hours – 30 is the quoted magic number.

Charging takes a reasonable 3 hours from the mains when completely exhausted – the switch will turn from a pulsing red to steady green when done, and it's all very discreet (so easily hidden from the office snitch!).

The switch-cum-battery life indicator is a firm, rubberised affair at the back of the unit, just above the charge port – easily prodded by thumb, yet positive enough to prevent unwanted engagement. 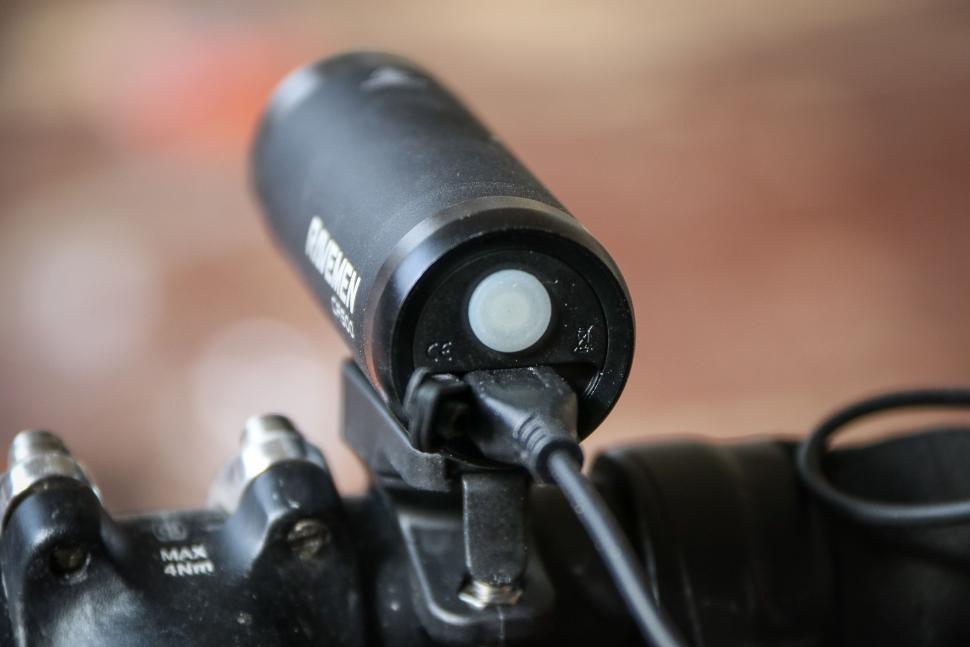 There's also the wired plug-in remote switch, which doesn't turn the light on/off but makes selecting modes on the move that bit easier still. Like its bigger brethren, what is particularly useful about this switch is the ability to hold it down to produce the full 500-lumen blast when needed – for sudden darker moments, or when transitioning from  suburban to rural locales or simply to signal to other road users.

A 6061 CNC housing, with IPX6-compliance decent anodising, is impressive and the unit reckoned to withstand a drop of one metre onto a hard surface. Allowing for air-cooling, aluminium disperses heat very successfully, which should ensure diodes, switchgear and circuitry reach their milestones. The diode is reckoned good for 50,000 hours, although this is somewhat tempered by the fit 'n' forget 1700 mAh lithium-ion battery.

Heavy rain and more intensive close blasts from the garden hose made no impression whatsoever, and a two-year warranty adds further peace of mind.

The bracket is a sturdy resin unit that genuinely caters for most common diameters of bar. Some very old sizes, such as pre-standard Cinellis, may require a homemade shim, and fully aero (ovalised) models may prove non-starters. Otherwise, the thumbwheel clamp is a cinch to tighten and feels really secure, although it's less convenient than rubberised O-ring or ladder types.

Ultimately, I've been pleasantly surprised by the CR500, even if, like the competition, it suffers from short run-times in the highest setting, limiting its appeal for longer distances on unlit roads.

I would also have preferred a wireless remote and one that would switch the light on/off. That said, the build quality, compact dimensions and a good beam pattern cover most bases for general riding.

My feelings are that it's a capable compact light with some nice touches and useful settings for general riding.

Pretty straightforward; plug-in remote switch makes it much easier to select modes mid-ride but it's a shame it doesn't turn the unit on/off.

Less convenient than the ladder/O ring types but very sturdy and genuinely accommodates most diameters neatly. I found some bars (especially very old Cinelli) needed a shim (I made one from old inner tube).

Took everything in its stride and passed my usual tests with flying colours.

Competitive by genre standards, very frugal in the lowest steady and flashing settings.

Just enough bite for navigating unlit rural roads, and lens is well tempered, so plenty of presence without dazzling others in built-up areas.

No reason to think it won't serve several seasons, though a replaceable battery would have been a definite winner.

Overall, the Ravemen CR500 has been a very pleasant surprise. There is just enough navigational bite for the back roads and, thanks to the wide-angle flood, plenty of presence too. Other modes strike a sensible balance between power and burn time. Build quality is good and the unit generally simple to operate. I liked the remote switch, although the ability to power on/off as well as simply changing modes would be welcomed.

Though the beam is cast a reasonable distance, a cutaway lens would be welcomed, especially when it's not paired with a blinkie.

Would you recommend the light to a friend? Yes, for general riding.

Decent light for the money with some nice touches, but like others of this genre run-times are limited in the higher settings, and some side windows would be welcomed, especially if used as a sole front light.