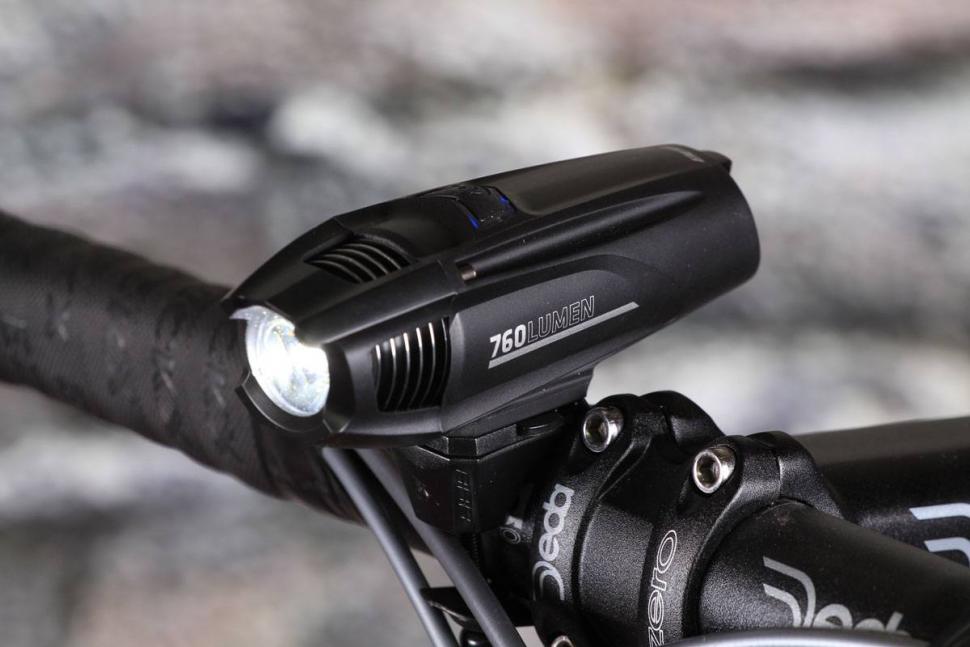 The BBB Strike 760 is a powerful but compact torch-style front light with an impressive output and run-time in a small package. It has all the light you'll need for most road riding (unless you're going to be out all night), but it lacks some features found in similarly priced competitors.

If this light was a car, it would be a hatchback with a big engine but no electric windows. The grab handles would be undamped, like they were in 1999. As a means of seeing where you're going, it is very effective, chucking out as much as 760 lumens from a package that weighs barely over 100g. Somehow, BBB has managed to squeeze in pretty decent battery life too – as much as 15 hours in low mode.

John reviewed the Strike 500 in 2012, and back then it was also a hundred nicker; LED and battery technology moving on means that you get 52% more bang for your (mixed currency metaphor alert) buck in 2016. But otherwise this is pretty much the same as four years ago. As John said, the clamp is simple and effective: a plastic band that is secured by an Allen bolt. There are two holes, allowing it to fit to 31 or 25mm handlebars, and once you've done it up it stays firmly in place.

If you're fitting to a bike and leaving it there, it's fine – if you're always switching between bikes then you might prefer a tool-free clamp system. You can also mount the Strike on your helmet; BBB has a mount available for this but not included as standard. The relatively low weight would make it a good option for a head torch.

Operation is straightforward, via a single button. You click it to switch the light on (no need to hold it down), and then successive clicks change the mode. Holding the button powers the light off. As the button is quite stiff, I wouldn't be overly concerned at it switching on uninentionally (the reason why most lights require an extended press), but I do take issue with the fact that when you're cycling through the modes (super beam, high beam, standard beam, low beam and flash beam) the cycle passes through "off" between flash and super beam.

Most night-time riding that I do includes a variety of environments and ambient light levels, and as such I'm often switching between a light's modes to suit. Having the light switch off is not what you want when you're moving! Modern lights generally are pretty consistent in terms of operation – click to change mode, hold to switch off. It's a mystery to me why BBB should do things differently here, and a weak point of this light in my view. While we're on the subject, there's no "mode memory" here either, so the light always powers up on super beam irrespective of what mode it was in when you last used it.

> Check out our guide to the best front lights

What of the modes, then? The four constant levels give a good range, from very bright down to a much lower level allowing a lengthy run-time when you don't need masses of illumination. The flash uses the full 760-lumen output in a simple on-off mode at two flashes per second. I found it was effective at getting you seen when riding through traffic day or night. Riding in the dark, I'd much prefer a mode where the light is always on with brighter flashes.

Thermal protection is built in, so the light automatically switches down to "standard beam" (228 lumens) if those cooling fins on the front aren't managing to keep the temperature under control, complicating the process of trying to test run-times while sat at my desk.

The beam itself is pretty good too – a strong central spot that cuts a long way down the road with a wider, gentler surrounding output. It isn't StVZO compliant, so wouldn't be suitable for use in Germany, but it was fairly simple to keep the whole bright central spot directed at the ground, such that the lighting levels weren't dazzling to drivers. The light does have a brow, which provides a cutoff to the top of the beam, but I think it's primarily to avoid dazzling you the rider rather than offering much to other road users.

Charging is by USB, as you'd expect, but not the micro-USB that is now used almost everywhere, which is a shame. There's the required mini-USB cable provided, but it's another example of where I think this light is lagging behind some competitors. The charging port is covered by a rather flimsy rubber cover, which I can't say filled me with confidence, but I didn't see any issues with waterproofing during testing.

The power button has a bi-colour LED under it, which is blue in normal operation and red once you've drained 50% of the battery capacity. BBB's claimed run-times of around 2 hours and 12 minutes on super beam and an impressive 15 hours on low beam were pretty accurate. As the battery runs down, the light automatically drops to lower output to give you ample opportunity to get home safely.

So, to sum up... when considered in isolation this is a pretty effective light that isn't heavy but still has decent battery life. Only when measured up against competitors with convenience features that are missing here might you conclude there's room for improvement. From those that I've tried, the Cateye Volt range is the strongest alternative, with the 800 offering similar output at a similar price, but it's simply a nicer light to use, and that's where my money would go.

Strong output and decent battery life, but usability isn't as good as some

BBB says: "The Strike 760 produces a powerful round beam which is designed for use on both a road and mountain bike. Install it on helmet or handlebar. Powered by an internal battery."

A plastic body on a £100 light doesn't shout premium, but it's fairly rugged and seems like it'll last.

It's easy to use, but the fact that the mode selection goes via "off" each cycle is just plain stupid. I'd like a memory mode too (so it turns on in the mode in which you'd turned it off).

It's effective, holding the light solidly, but it's quite basic, using a plastic strap and an Allen bolt. Other brands' tool-free clamps are more refined. I prefer to mount a front light hanging from the handlebar, and the design of the mount here made that quite fiddly.

No issues, although I have some doubts about the bung that seals the charging port.

Really good considering the size and output. Exceeds the claimed run-times, quite comfortably in fact.

On super beam and high beam there's ample light for going quite quickly in the dark. The lower modes are fine for steadier progress or where there's more street lighting, and the full-power flash mode is very eye-catching. I like the beam shape – with a strong central circle and a gentler outer halo.

Yes it's plastic, but it seems pretty tough. The bit that's always likely to wear out first is the battery, so allowing replacement is a smart move.

Very good for the output power and reasonable battery life.

This is about the going rate for a well-made torch-style light with this sort of output. There are alternatives in the same price bracket that are more refined, though.

Generally well. It gave enough light to see by in all of my riding environments, stayed where I put it on the bars, and gave loads of warning when the battery was getting low. Considered in isolation, it's a pretty good light, but...

Lacks some of the refinements of competitor products – eg cycling via "off" when changing modes is dumb, and I think a low battery warning at 50% charge is too early, without a further "ok now it's critical" warning level.

Would you recommend the light to a friend? There are other lights I think are better for the money, so no.

This is a good light. It will see you through almost all your road-riding needs, and it won't leave you in the dark without loads of forewarning. The best lights in its category offer better flash modes, easier battery changes and don't power off when you're cycling through the modes – and that's where this one is lacking.