5
10
Good idea, but only the most dedicated will appreciate it
Weight:
205g
Contact:
nrg4.co.uk
What the road.cc scores mean

Having seen thousands of saddles in my years of cycling I thought that the only way they could get stranger was with new colours and patterns. Then Essax brought out the Shark and I can safely say that it is the most unusual-looking saddle I have ever seen.

Maintaining the basic shape of a saddle, the Shark introduced a 'fin' at the rear which is designed to improve your power, decrease rotation and promote correct posture when riding. 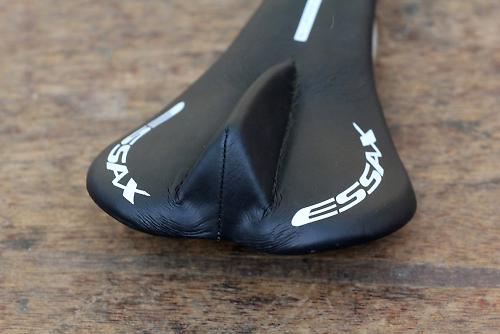 When opening the box, the first thing you notice about the saddle is simply that it looks like a medieval torture device. It has the fin that is positioned to let you know when you are not sitting correctly, essentially by making its presence known in your backside. It protrudes 40mm from the saddle and sits in the centre of the saddle in the rear 30% of the seat.

It also comes in at 205g and costs £80, which for a saddle currently under consideration by the UCI and with a claimed huge amount of research behind it, isn't too bad. 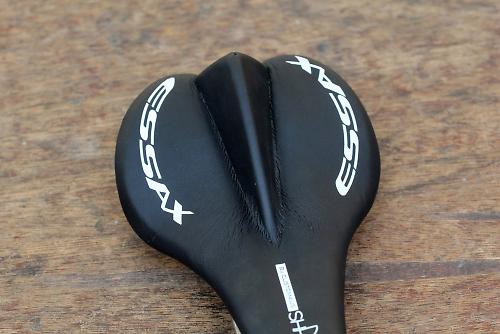 The idea is that the fin will not be noticed if you are maintaining the correct position on the seat. It works by forcing you to make it comfortable to sit on the saddle, which is also where you will be optimising your position and improving your posture. It also stops you from putting additional pressure on the genitals, instead forcing you to utilise your sit bones.

So after careful fitting (Essax recommend professional fitting before use, but I just set it based on where my regular saddle has been fitted and their online fitting guide, plus several test rides) I set off to find out whether I would be impressed or permanently mentally or physically scarred.

What I found was nowhere near as horrifying as I thought.

Although you are initially aware of the fin, once you sit where it wants you to it is almost imperceptible. That being said, it is surprising how much you shift on your saddle without realising it. I found this was especially true on climbs, the winces were no longer just the 'shut up legs' variety, but also the sudden realisation that I did a fair amount of rotation when under heavy exertion.

It certainly forced me to re-evaluate the way I was sitting on my bike to avoid 'discomfort' and had the effect of making me stay in my saddle for longer. Standing on the pedals on a hill inevitably meant either staying standing for the rest of the climb or sitting back down and trying to concentrate on not being 'stuck' by my saddle, not something that you really want midway through a long climb.

Adding to this is the fact that the position that it forces you into is pretty aggressive and it is towards the nose of the saddle, meaning less surface area, so bumps feel harder with less space to dissipate the impacts. This means that even though it may improve your power and posture, it is uncomfortable to ride for anything over 45 minutes. After coming back from a ride it feels almost like I hadn't been on a bike in a year, despite a fantastic Assos chamois. 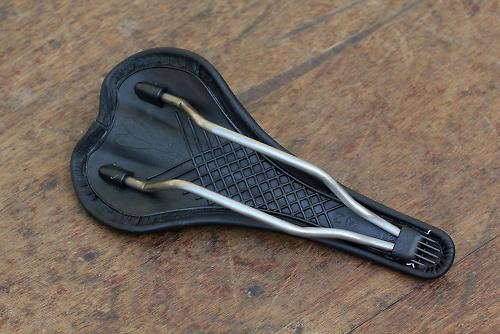 The structural build of the Shark is good, it seems sturdy and even the fin seems like it would last a long time (especially as it should theoretically not have much wear). However, I do have some reservations about the material on the saddle, which even before it has been used has a significant number of wrinkles. These are natural weak points and with the amount present, I would worry about the durability of it in the long term.

I believe that this is a saddle that many would be curious to try, and it's easy to see why. It is clear that it has significant benefits in terms of helping to improve your posture and how you sit on your bike. However, I would compare it to changing the airbags in your car with a spike to make sure you are a safer driver. I found this saddle interesting to use, but it is not something that would stay on my bike for more than a couple of weeks before I would want to be able to sit back or climb without worrying about sitting down again. It would be a product for those with total dedication to improving their posture, not somebody who is always looking to improve, but may not want the negative reinforcement and feedback that this saddle brings.

Good idea, but only the most dedicated will appreciate it

Editor's note: Since publishing this review Essax have informed us that in error we were sent a saddle best suited to track cycling or triathlon. This information was not at the time of testing listed on the Essax website, an ommision that has now be rectified. Had either we, or George our reviewer, been made aware of this fact George would not have tested the saddle as he doesn't ride on the track or race triathlons.

Essax are now sending us a road version of the Shark saddle for review.

The saddle is designed to optimise how you sit on the bike. 60% of your weight is supported by the saddle so the guys at Essax have attempted to make sure you are sitting properly. This is to make it more comfortable for the rider and also maximise the power output through the pedals.

Although it does achieve what it sets out to do in a sense, it needs to be more comfortable when you are in the 'correct' position. If the idea being that the reward is increased comfort and power, then the comfort needs to be more apparent.

The overall structure is solid and the fin also appears to be well made, so I would have no concerns regarding it in that sense. However, the material has several wrinkles and folds in it around the rear of the saddle and particularly the base of the fin, I would be worried about the durability of it in this way.

It performs well for power and repositioning you, but in terms of comfort it needs to have either more flex or padding where you are placed when riding.

Rate the product for durability:
5/10

The wrinkles and folds make me worried about how it would last in the long term.

Given its additional fin, 205g represents a good weight for a saddle.

Rate the product for comfort, if applicable:
3/10

Not one for long rides.

Hard to evaluate as it could have a profound impact for the right person, meaning that £80 is a good price. For others though, it may not be worth that money for an experiment.

It forced me into a new riding position where I could certainly see a difference, increasing my power through the pedals. In terms of improving my comfort, I can safely say that it didn't.

The improved power was great and the idea behind the product is something I also like. The idea that this could act as a personal coach just through sitting on it is something that will become increasingly popular in the next few years. Maybe not through this means though.

It did cause discomfort on long rides and the position it forces you into is not particularly flexible. When climbing I want to be able to sit back down without worrying about how I'm positioned.

A good idea, but in reality something that is perhaps a step too far for performance improvement. It is also a saddle that few would want to have on for an extended amount of time and I would be interested to see if the improvements in how you sit transfers back to traditional saddles. 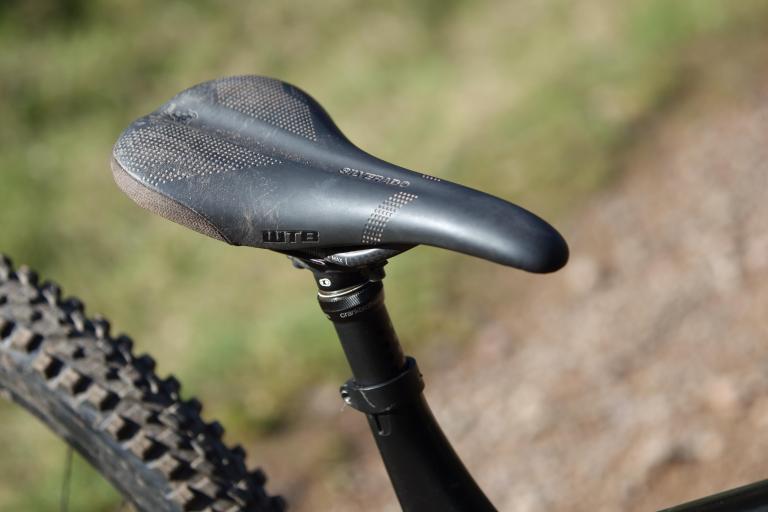 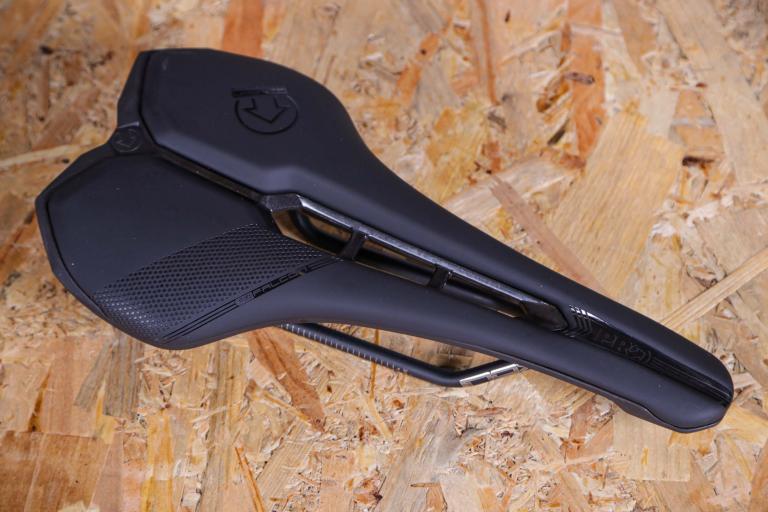 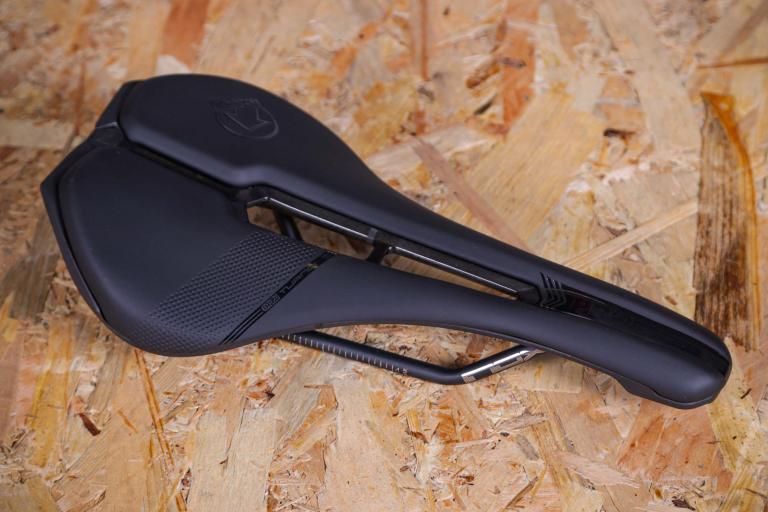 Long, stiff-based and great for fast road riding, yet usefully comfortable too 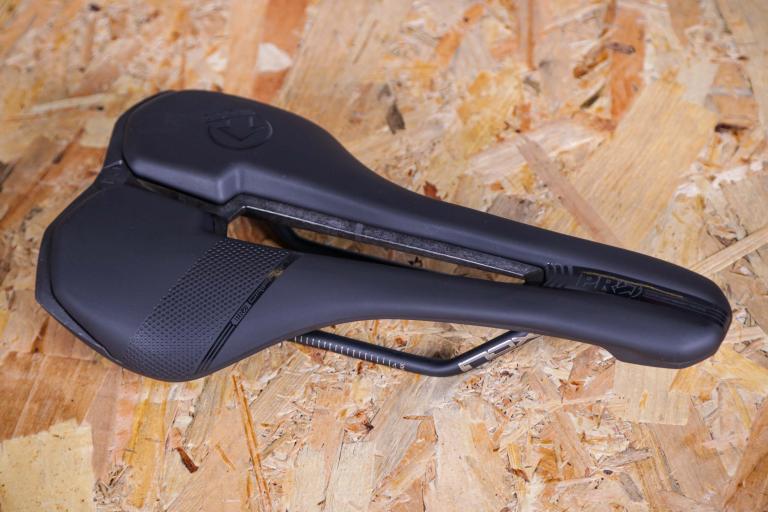