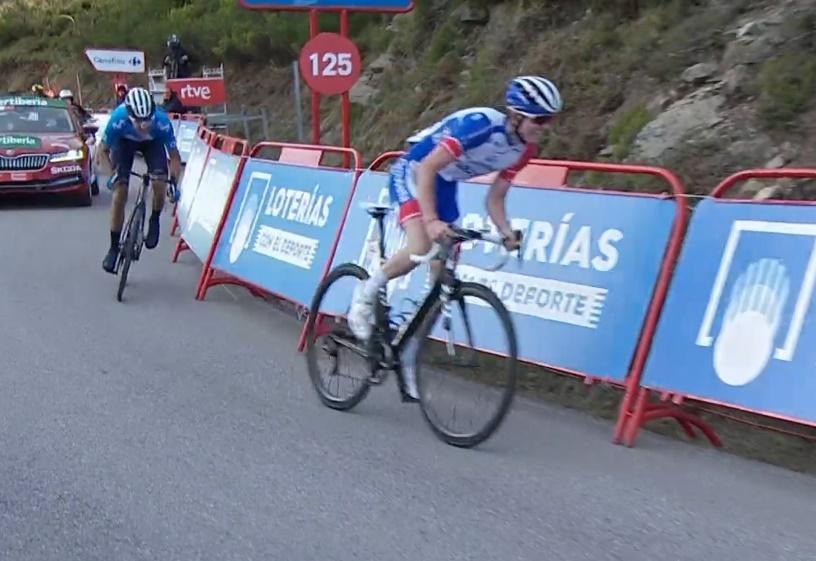 Marc Soler, second on the day, moves up to sixth overall
by Alex Bowden

David Gaudu (Groupama-FDJ) took his third professional victory on the Alto de la Farrapona on Stage 11 of the Vuelta a Espana, having spent the day in the break. The day was also notable for Chris Froome leading a rider protest over time bonuses before the stage start.

Gaudu was one of two riders in with a chance of victory on the first of two summit finishes this weekend, and edged out fellow breakaway rider Marc Soler (Movistar) in the final few hundred metres.

Soler could at least comfort himself with having moved up four places to sixth overall.

There were no other significant changes in the top ten, although young British rider Hugh Carthy (EF Pro Cycling) – who is fourth overall – was gapped at the finish and lost seven seconds to those ahead of him.

Earlier in the day, Chris Froome (Ineos Grenadiers) had led a rider protest over changes to the rules on time gaps at the end of the previous day’s stage.

Stage 10 winner Roglic had gone into the race lead on the same time as Richard Carapaz (Ineos Grenadiers) that day following a split in the bunch.

Race judges had used a one-second rule to identify the time gaps. However, Eurosport reports that riders had been told at the start of the stage that a three-second gap would be needed to qualify as a split – a rule that is applied on stages where a sprint finish is expected.

Because times are taken from the first rider in each group, a one-second split from the back of one group to the front of the next can in some cases mean riders in the following group losing 10 seconds or more.

"It was a mistake on the UCI’s part and the commissaires part," said EF Pro Cycling’s Michael Woods. "They initially said at the start of the stage it was going to be a three-second gap instead of a one-second gap.

“Looking at the finish it should have been a one-second gap, but that’s what they said at the start. But at the finish they changed their mind.”

Woods said that several riders would have approached the finish differently had they known how the rules be applied. He also said that Jumbo-Visma were “on board” with the protest even though they had benefited.

Froome took it upon himself to lead the protest and spoke to race organisers about the riders’ concerns.

It has since been reported that EF Pro Cycling have lodged EF an official complaint.