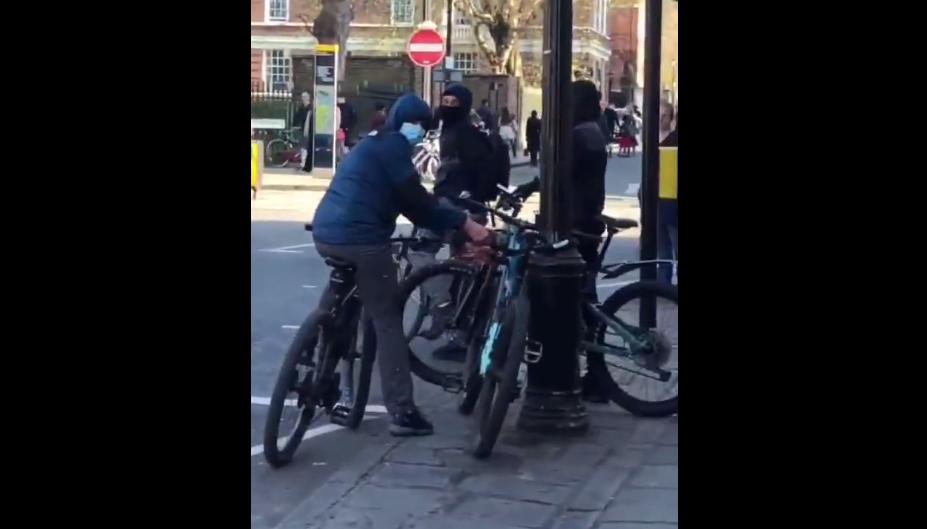 A ​new video has emerged of bike thieves in London using a portable angle grinder to try and steal a bike by cutting its lock.

The incident took place at around 4pm on Saturday afternoon on King William Walk in Greenwich, according to the Twitter account @CrimeLDN.

Yesterday in Greenwich on King William Walk at around about 4pm pic.twitter.com/Vf0vKQlxS8

As the three thieves, wearing masks, notice that they are being filmed, a woman can be heard off-camera saying “That’s not their bike at all.”

Meanwhile a driver also apparently beeps their horn at them, and a passing dog also wanders over to see what is going on.

Thieves in London and beyond are increasingly going equipped to steal bikes through using portable angle grinders, which nowadays can be small and relatively inexpensive, to cut through locks.

And as in this case – filmed at the junction of King William Walk with the busy Nelson Road at a time on a Saturday afternoon when the centre of Greenwich would be bustling with visitors – often the thieves are unbothered about how busy the area is, or about being filmed.

In November last year we reported on another case in south east London where a gang was filmed using an angle grinder to steal an e-bike outside a shopping centre.

That theft took place outside the Surrey Quays Shopping Centre in Rotherhithe, with the footage shot by road.cc reader Martin Pelant, who passed it onto police and, when he returned, the bike’s owner.

One of the thieves’ faces was clearly caught on camera, and the owner of the bike subsequently passed on a “possible ID” of one of the suspects to police.

Last month, thieves attempting to steal a bike on Leith Walk in Edinburgh by cutting the lock with an angle grinder fled when they were challenged by passers-by.

After the thieves fled, the people who had thwarted them waited by the bike for an hour to safeguard it until its owner, a nurse, returned.