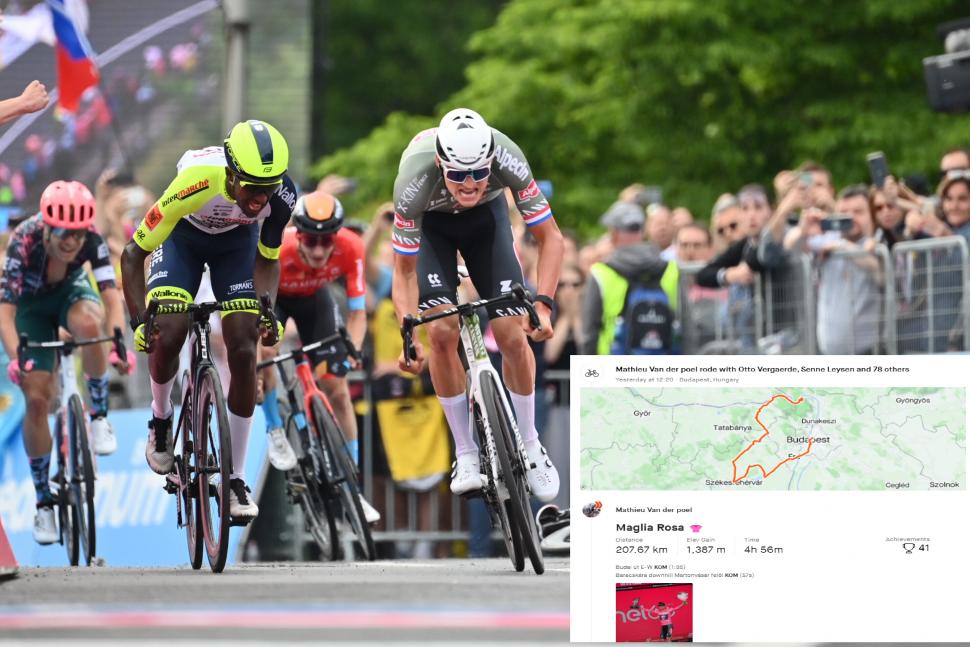 Van der Poel averaged 528w for the final four minutes of the climb, peaking with a 949w 20-second sprint up the 5 per cent slopes...
by Dan Alexander

Mathieu van der Poel was back to his frightening best on yesterday's opening stage of the Giro d'Italia, powering up the final climb to Visegrád to win ahead of 2022's breakout star Biniam Girmay.

The Dutchman's winter Cyclo-cross season was cut short by injury, but he returned in time to win a second Tour of Flanders crown and a second Dwars door Vlaanderen in the spring.

> How hard is it to win Tour of Flanders? Mathieu van der Poel uploads mind-boggling power data to Strava

Now, at his first Giro d'Italia, the Alpecin-Fenix rider looks as dominant as ever, taking his first Giro stage win at the first attempt after Caleb Ewan repeated his crash from last year's Tour de France, touching wheels with the rider in front and hitting the deck hard.

By that point Van der Poel already looked in control and had unleashed his famous 1,000w wrath on the five per cent gradient.

As with his Flanders win, the 27-year-old has been a good sport and uploaded yesterday's ride to Strava, with all the juicy power data.

Van der Poel outpaced Girmay in the grind to the finish line, smashing out 719w for the final 44 seconds of the stage, including 20 seconds at 949w, and peaking at 1,166w. 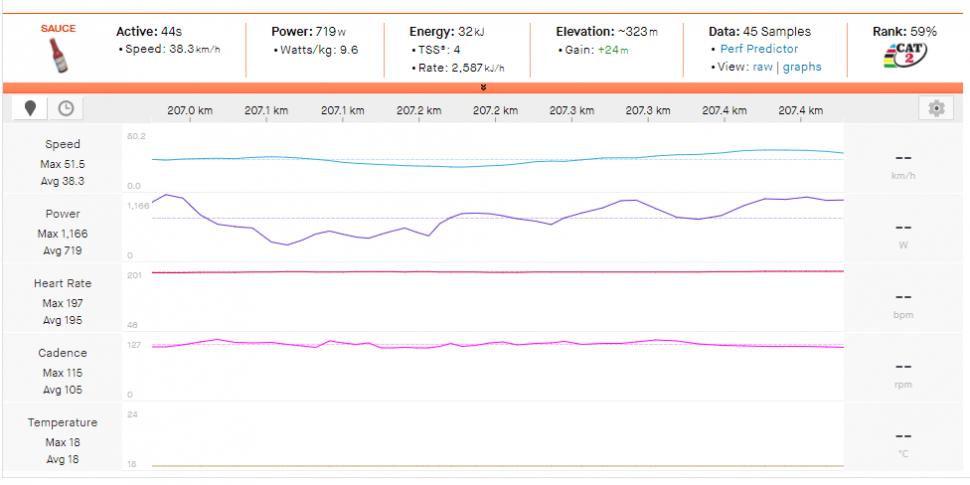 Mind-boggling numbers for most amateur riders, but made more impressive coming at the end of a nine-minute climb where Van der Poel averaged 480w or 6.4w/kg (based on 75kg bodyweight).

With Lennard Kämna attacking the peloton, the pace was lifted in the final two kilometres, pushing Van der Poel to 522w (7w/kg) for the final four minutes of the stage.

Flat out the pace reached a quad-burning 36.6km/h (22.7mph) in the final kilometre. Even more staggering with the context that the finish averaged 5.1 per cent.

With the line in sight, Van der Poel hit 51.5km/h (32mph) while smashing 1,000w+ through the pedals, his heart rate rising to 201bpm as he summited the climb, unable to even lift an arm in celebration. 607w average for the final kilometre, at 36.6km/h. Speeds most of us would be delighted to hold on the flat, let alone up a 5 per cent incline at the end of 200km...

We need more sports where the winner of some massive competition goes and lies in some dirt and leaves right afterwards because they're so tired #Giro (📸 Getty) pic.twitter.com/sD5dmTRCvj

Explosive finish but an easy day in the saddle

With that said, it was hardly the most demanding day of racing the peloton will ever face. Rolling out of Budapest on a largely flat route, with an unthreatening two-man breakaway, Van der Poel did not average more than 2w/kg for the first 62km, his power of 145w more than manageable for most fit club riders.

The race for the bottom of the climb pushed things on a touch, but still, for the 200km preceding the finish ramp, Van der Poel averaged just 170w at an average heart rate of 110bpm. It took more than 40km to get him above 80bpm average...

You might have been able to keep up on the flat, but nobody could go with the flying Dutchman on the berg...can he hold onto pink today?