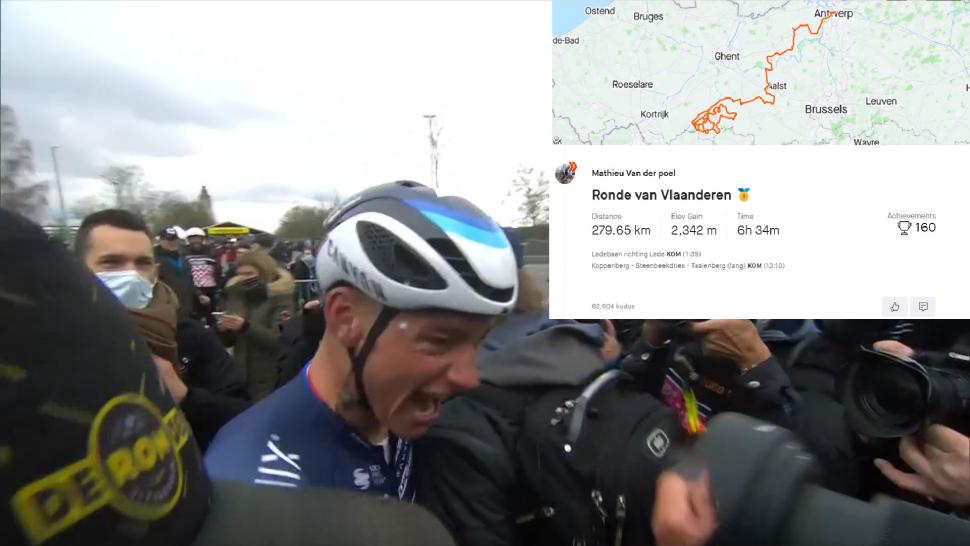 How hard is it to win Tour of Flanders? Mathieu van der Poel uploads mind-boggling power data to Strava

As the saying goes: if it's not on Strava, it didn't happen. Thankfully, Mathieu van der Poel's Tour of Flanders-winning ride did happen (and has since been uploaded with full power data), giving us all the pleasure of enjoying his cobble-smashing brilliance...

Van der Poel and Pogačar proved themselves to be the strongest on the climbs, breaking free on the Koppenberg before slugging it out up the remaining cobbled bergs.

Ultimately, however, the Alpecin-Fenix rider was the fastest of the four contesting the sprint, punching the air as he crossed the finish line in Oudenaarde, with a second Monument (and a hatful of KOMs) secured...

Have you 𝐄𝐕𝐄𝐑 seen a cycling finish like this?! 🤯

Mathieu van der Poel wins the Tour of Flanders after a dramatic game of cat and mouse leaves a furious Tadej Pogacar without a place on the podium 🐱🐭#RVV22 | @mathieuvdpoel | @AlpecinFenix pic.twitter.com/Xrms69bIWv

The pedal-smashing prodigy isn't afraid to show his key numbers to the world either — uploading his race-winning ride to Strava with the all-important power data for us to marvel at. 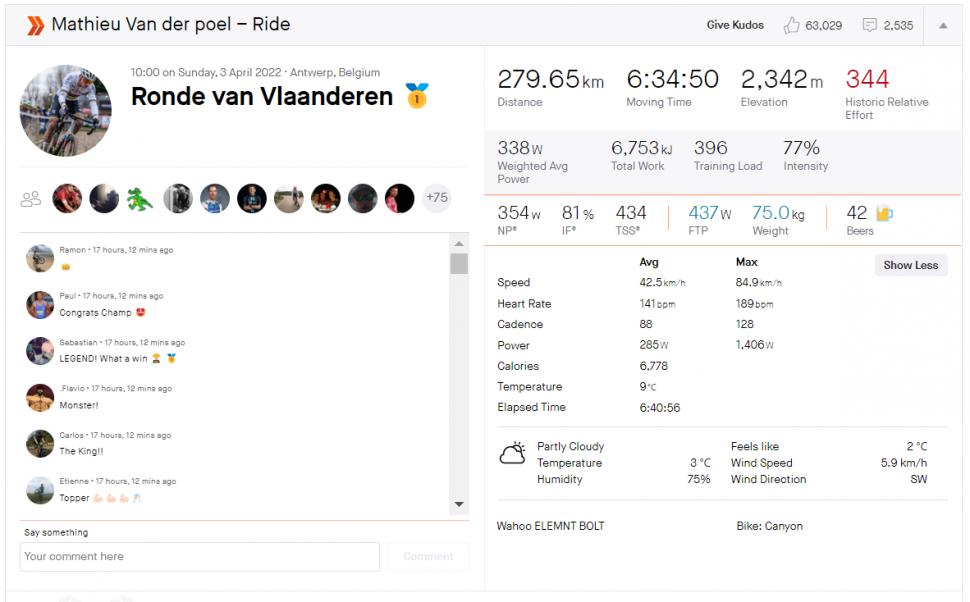 Van der Poel's weighted average power was an incredible 338w for the duration of the six hours and 34 minutes of racing.

His peak one-minute power came almost 80km from the finish, on the Berg ten Houte, where he hit 727w for 60 seconds. On the same climb, Van der Poel managed 618w for two minutes.

The second ascent of the Oude Kwaremont was Van der Poel's fastest of the race by some distance (15 seconds to be precise) as the 27-year-old bridged the gap to a rampaging Pogačar.

In the process, setting his peak five-minute power of the race (502w) and the joint second fastest time on Strava up the iconic cobbled climb... 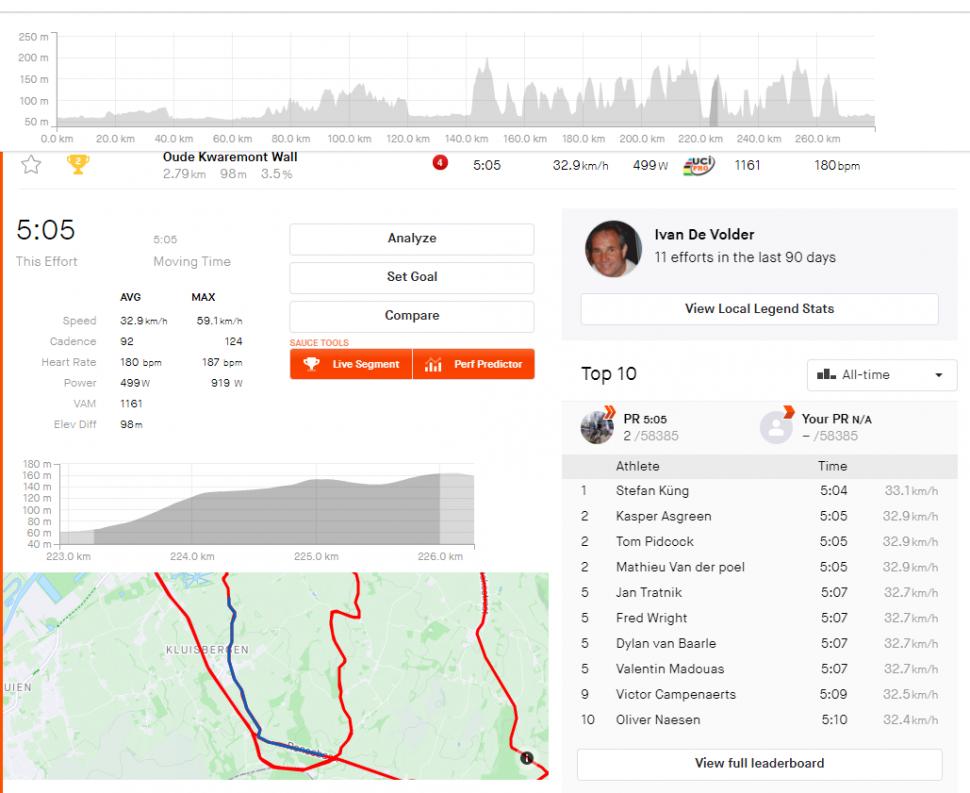 It was a similar story up the Koppenberg where, pushed to the limit by the speedy Slovenian, Van der Poel took the KOM for the Koppenberg, Steenbeekdries, Taaienberg triple-header, ticking off the climbs in 13:10, at an average speed and power of 38.2km/h and 436w... 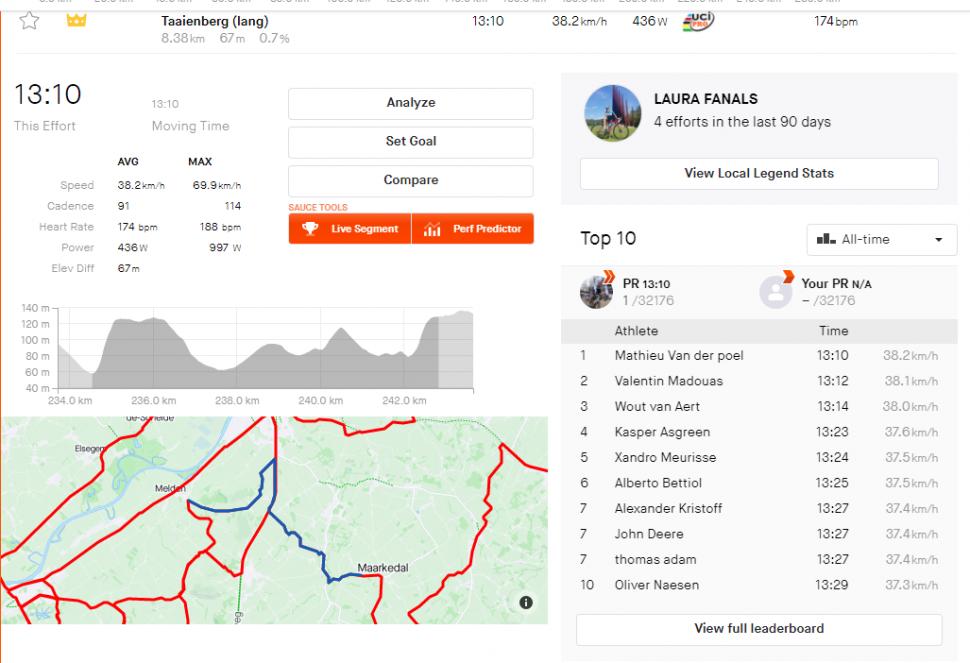 With the gap established early, Van der Poel and his UAE Team Emirates companion took the rest of the final ascent of the Kwaremont a touch easier than the previous time.

I say a touch, Van der Poel still smashed out 475w for 5:20, followed by 649w on the Paterberg as Pogačar did everything in his power to dislodge the Dutchman from his wheel.

We're just going to leave this here to brighten up your Monday morning 🤩#RVV22 #MVDP pic.twitter.com/4ADsi6qJAG

Unsurprisingly, the 27-year-old's peak 15-second power came in the devastating kick for the line, unleashing 1,137w for 15 seconds, and 1,383w for five, bringing back shades of his famous 1,000w Strade Bianche attack.

Other stats from the day include an average heart rate of 141bpm, plus a max of 189bpm.

Calories burned can be harder to pin down, Strava goes with 6,778 (or enough for 42 post-race beers) and a total work of 6,753kj, earning the newly-crowned two-time champ a historic relative effort score of 344. Go put your feet up, Mathieu. Chapeau.

Here's the link to the full Strava activity...

1
Near Miss of the Day 794: Driver passes cyclists signalling right — police suggest riders should have turned quicker
2
Cyclist's severed foot found on hit-and-run suspect's car as driver arrested
3
"Someone could be killed": Path users blame speeding cyclists for New Forest danger
4
"They said give us the bike or we stab you": Another cyclist targeted by motorbike-riding muggers on popular route out of London
5
Moriah Wilson murder: Kaitlin Armstrong caught in Costa Rica after six weeks on the run
6
Near Miss of the Day 792: National Express bus driver in ultra-close pass on cyclist (includes swearing)
7
Would you like to see the crazy Cadex tri bike in the Tour de France? Plus new stuff from Elite, CeramicSpeed, Santini, Bollé, MAAP & more
8
Tour de France Gilet-gate: Geraint Thomas explains how he forgot to ditch body warmer for Copenhagen TT