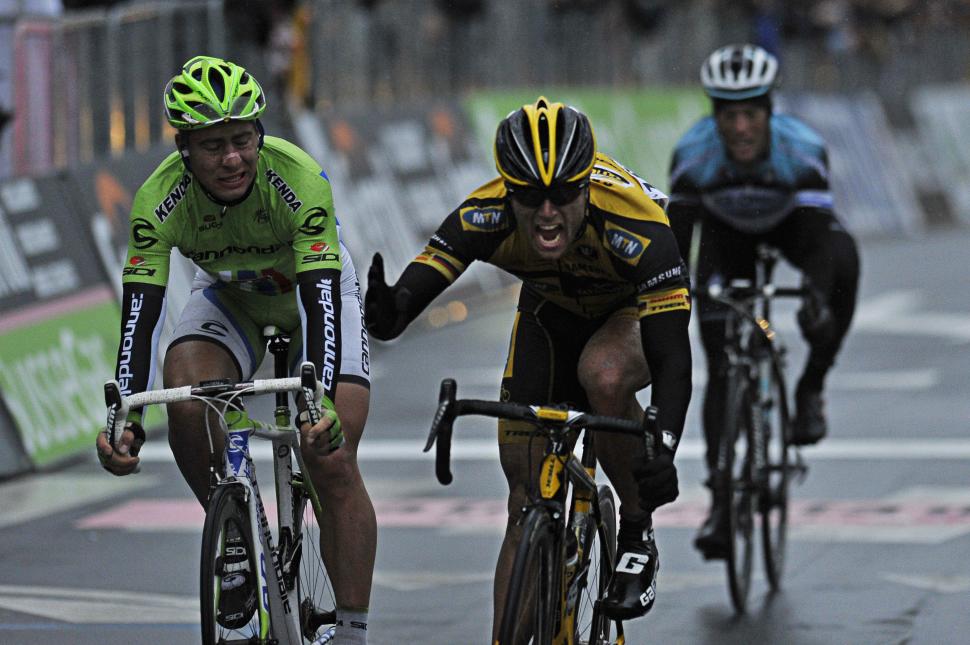 ‘Africa’s Team’, which helped get 30,000 people bikes to transform their lives, set to fold
by Simon_MacMichael

Qhubeka-NextHash, the UCI WorldTeam nicknamed “Africa’s Team” which has combined more than a decade of racing with helping change people’s lives by providing them with bikes, seems to have reached the end of the road after world cycling’s governing body confirmed today that it had refused it a licence for next season.

The news almost certainly means that the team, which this year won four stages of the Giro d’Italia through four different riders, will cease racing.

The UCI had given the South Africa-registered outfit headed by Doug Ryder an extension to the registration process to enable it to try and get sufficient backing in place to continue, but time has now run out.

In a statement, the UCI said: “After hearing teams that had not been able to be registered directly by the UCI, the Licence Commission has decided (art. 2.15.071) to refuse the registration of Team Qhubeka NextHash.”

Last year, only a late sponsorship deal with Switzerland-based clothing firm Assos enabled the team to continue racing in 2021.

A new sponsor, NextHash, was unveiled in the summer, but the team continued to be in a precarious financial situation, with missed salary payments to staff and riders, the latter being told that they were free to seek contracts elsewhere.

In part because of its association with the charity Qhubeka, through which it has provided 30,000 bicycles to people in Africa, transforming their lives through making their journeys to school or work easier, or even set up businesses, the team quickly became a fan favourite after it stepped up to UCI Professional Continental level in 2013.

A landmark win came in March of that year when German sprinter Gerald Ciolek won a snow-interrupted edition of Milan-San Remo that will live long in the memory.

Mark Cavendish won four Tour de France stages for the team in 2016 – including the opener in Normandy that put him in the yellow jersey – with Cummings also winning a stage that year, and Edvald Boasson Hagen, the rider with the most victories in the team’s colours, took another in 2017.

There has been no official reaction from the team as yet, but in mid-October, team principal Ryder wrote about its predicament on its website:

Today we are not in a position to submit our initial application for our UCI WorldTour licence for next year to the sport’s governing body.

We are actively engaged with potential partners, and our current partners, as we work to secure our future for 2022.

Since inception our team has provided hope and opportunity to over 50 riders from Africa who have ridden for us at either Continental, Pro Continental or World Team levels, and as a result have had the opportunity to showcase their talent and realise their dreams.

The recent news that Rwanda will host the 2025 World Championships is a huge moment for our sport, and one that we are very proud of in the role we have played in support of Africa,  its cycling potential and as a destination to ride. Seeing Biniam Ghirmay from Eritrea come 2nd in the U23 World Championships this year was incredible. He was just 14 years old when Daniel Teklehaimanot wore the King of the Mountains jersey in the 2015 Tour de France with our team. Their stories, as well as the journey of Nicholas Dlamini from the townships in Cape Town to the Tour de France, are inspirational.

Across our Continental and World Team outfits we have staff and riders that champion our message – bicycles change lives – and enable us to be a platform to raise awareness and funds for the Qhubeka Charity.

We are completely unique across the sporting landscape as a purpose-led organisation that during the course of our decade-long partnership with Qhubeka has seen our team raise over $6M for the Charity, and in the process changed thousands of lives.

We remain confident that our story is not complete, our journey will carry on, to continue to change lives through bicycles.

I have always said that our dream for this team would be to see a young person from Africa, who starts their journey on a Qhubeka bike, one day race on cycling’s most famous road – the Champs Elysée. That will see the dream fully realised.

If you, or any of your business network, want to partner with our team and keep changing lives, please contact us here. Thank you for your support.

Ubuntu- I am because we are.

Back in autumn 2013, immediately after the route of the following year’s Tour de France had been announced at the Palais des Congres in Paris, we stopped for a coffee in a bar on the walk back towards the Champs-Elysees – the same bar where Ryder happened to be.

He was in Paris to try and convince ASO to give the team a wildcard for the 2014 race – they wouldn’t get one – but over a coffee, he outlined his vision for not only the team’s future, but also how it could act as a catalyst for change in cycling in Africa not only as a sport, but more importantly to provide a life-changing means of transport to people who could not otherwise afford a bicycle.

At a time when several leading teams are now sponsored by companies active in fossil fuels, that vision and ethos will be missed.