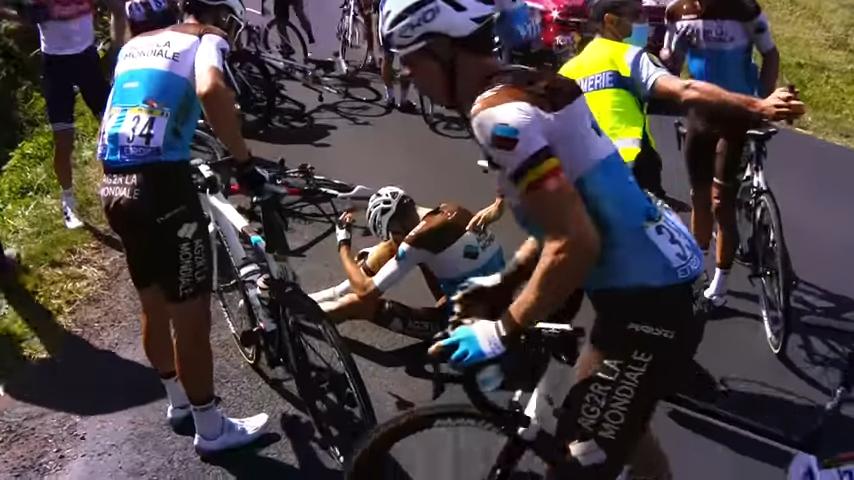 The UCI has today published a new sports-related concussion (SRC) protocol, which will apply to all cycling disciplines on the UCI International Calendar from the start of next season in January. The news comes as a brain injury charity warns that “cycling is lagging miles behind other sports” in dealing with the issue.

It also comes as 70 former rugby union players launch an action against World Rugby and the English and Welsh governing bodies over long-term conditions including dementia which they claim result from concussions sustained while playing the sport, alleging that the authorities failed to adequately tackle the issue.

There have been serious concerns over the effects of concussion in cycling for several years, with one common issue highlighted being that riders involved in a crash in which they have sustained a blow to the head will be allowed to continue riding without having the injury assessed – as happened this year with Romain Bardet at the Tour de France, for instance.

> Team boss lauds Romain Bardet’s “admirable courage” – but should someone have stopped Frenchman riding to stage finish with concussion?

Taking as its starting point the 2017 Berlin concussion consensus statement drawn up by a range of sporting bodies, the UCI’s new protocol follows a review begun last year that was led by its medical director, Professor Xavier Bigard, and also involved international experts including doctors, scientists and neurologists.

According to the UCI, in cycling SRC is estimated to account for between 1.3 per cent and 9.1 per cent of injuries, depending on the discipline in question – road cycling, track cycling, mountain bike, BMX Racing, BMX Freestyle, cyclo-cross, trials and indoor cycling.

Road and track cycling, as well as mountain bike, have been identified as the disciplines in which it takes most time to reach injured riders and for first responders to make a diagnosis and determine whether they should be allowed to continue in the event.

“In responding to this problem, the protocol recommends that non-health professionals (in particular coaches, Sport Directors, mechanics and riders) be trained for recognising the signs of suspected SRC since they are very often the first people on the scene after a rider falls,” the UCI said.

“The protocol details the signs that need to be looked out for in assessing the condition of the athlete (feeling stunned or dazed, trouble with balance, headaches, slurred speech, changes in vision) and in taking an appropriate decision in an optimal timeframe, either roadside or trackside. Training resources in the form of symptoms cards will be published to help non-health professions detect the signs of suspected concussion.

“If these signs are detected, the diagnosis will need to be confirmed by the race doctor. In the absence of any initial signs pointing to SRC, the rider should be monitored by the medical service. A standard examination comprising, among others, tests of orientation to time and place (Maddocks questions) and balance, may be conducted at any time.

“In all cases, the rider should undergo a more thorough examination after the race using the SCAT5 tool, comprising a neurocognitive approach,” the UCI adds. “This examination would also be repeated the following day.”

The protocol also details recommendations relating to when a concussed rider can return to competition, including a complete rest period of 24-48 hours and not returning to competition for at least 1 week after the symptoms have gone, or two weeks in the case of juniors. It also recommends compulsory notification of SRC events to the UCI’s medical director.

Professor Bigard said: “The issue of sports-related concussion was one of my priorities, along with the misuse of tramadol, when I arrived at the UCI in 2018. Cycling now has guidelines that set out the various phases involved in dealing with SRC (initial assessment, diagnosis, recovery, and return to competition).

“This protocol applies to all disciplines, while taking their specific characteristics into consideration. It will make it easier to trace individual SRC cases and better understand their place in cycling traumatology.”

Quoted in Sportsmail this morning, Luke Griggs, deputy chief executive of brain injury charity Headway, said that “Cycling is lagging miles behind other sports” when it comes to dealing with SRC.

“The risks of suffering a second crash, and putting yourself and others in more danger, are obviously far higher when a rider is concussed. It is simply an unacceptable level of risk,” he said.

The newspaper also made reference to the case of Kelly Catlin, the American team pursuit world champion, who took her own life last year, aged 23, with her family speaking off how her personality changed after she was concussed in a crash.

“Kelly did not have any underlying mental illness,” explained her father, Mark.

“The concussion changed her behaviour profoundly. She became moody, prone to fits of anger and bouts of depression. That was in part due to severe headaches and frustration with an inability to train.

“She felt she was going crazy. She felt trapped by expectations from family, friends and team-mates. Unable to meet those perceived expectations, she ended her life.”

He added: “I am not aware of anyone talking to her coach regarding a return to competition protocol and how it should be managed. There was a complete failure of communication. Her death is an indictment of a medical infrastructure that fails our finest athletes.”

Dr Nigel Jones, formerly doctor for the England rugby union team and who became head of medical services at the Great Britain Cycling Team in 2017, told Sportsmail he was “surprised at the absence of robust policies” after switching sports, leading to him drawing up procedures to deal with concussion.

“In rugby you have to be symptom-free before you start your return-to-play protocol and we have put something similar in place,” he explained.

Dr Jones, who was involved in the working group that formulated the UCI’s new protocol, outlined some of the issues specific to road cycling.

“The first thing that happens when somebody crashes in a road race is a panic to get them back on the bike as quickly as possible,” he said. “If you had a concussion car and a rider crashed, they would go into it and have a head injury assessment.

“If it is deemed the rider hasn't had a concussion, the car tows them back into the peloton. Then you are not having that panic that if someone falls and they are not back on their bike within 30 seconds, it is stage over.”

Besides rugby union, rugby league and association football are also expected to become involved in lawsuits relating to long-term damage caused by concussion but one solicitor specialising in brain injury cases has warned that such cases can take years to be decided – and could result in “astronomical payouts” having to be made by governing bodies.

Referring to the case relating to rugby union under the law in England and Wales, Ipek Tugcu, Senior Associate in the Brain Injury Team at the law firm Bolt Burdon Kemp said: “To win, the players must prove that they suffered brain injuries because the Defendants (World Rugby, Rugby Football Union and Welsh Rugby Union) failed to take reasonable steps to protect them from the known risk of brain injury. What is ‘reasonable’ will be determined by the information known, or ought to have been known, at the time of the events.

“This is not easy, and will require consideration of volumes of documents to identify what information was available on the risks at the time and evidence from independent medical experts regarding the link between the players’ brain injuries and any failings.

“It wouldn’t be unusual for this to take years,” she continued. “A legal action of this magnitude is bound to have significant implications for athletes, especially rugby players, suffering from brain injuries. If successful, it will set a precedent for others to come forward relying on the similar grounds.

“The impact on rugby’s governing bodies would be astronomical – the financial payouts per athlete could easily reach six-figure sums or more, as they will need to cover all injuries and financial losses suffered due to the injury.

“Money aside, I would expect very swift and robust changes to be made to the game to fill in any gaps which could leave the governing bodies open to more legal action,” she added.