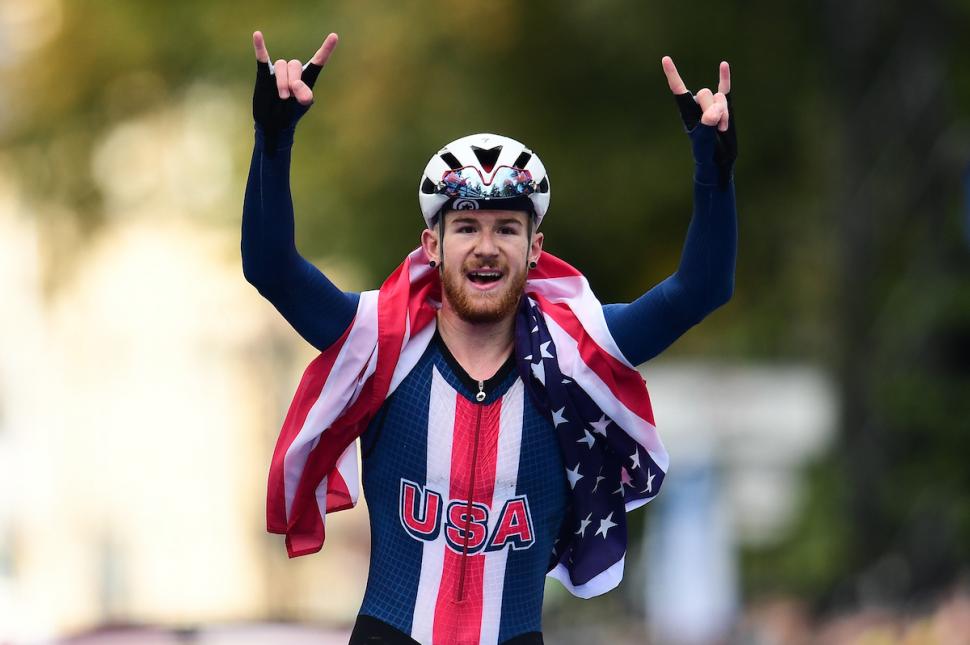 Trek-Segafredo's reaction to Quinn Simmons' comments finally landed late Wednesday evening UK time, and he has been stood down from racing. Here is the statement. See our initial article below.

Trek-Segafredo response to public comments made by Quinn Simmons pic.twitter.com/ygqYjy8FWz

“Racism is unacceptable. Period.” That was the reaction this evening of Trek-Segafredo after its rider Quinn Simmons replied on Twitter to a journalist who had asked supporters of US President Donald Trump to unfollow her on the social network with the word “Bye,” with the pro cyclist, who is white, adding an emoji of a waving brown hand.

The 19-year-old American was responding to a tweet from the Dutch journalist and commentator José Been, who had written a tweet this morning saying: “My dear American friends, I hope this horrible presidency ends for you. And for us as (former?) allies too.

“If you follow me and support Trump, you can go. There is no excuse to follow or vote for the vile, horrible man.”

Been's tweet followed last night’s presidential debate in Cleveland, Ohio between Republican Trump and Democratic candidate Joe Biden in which the president failed to distance himself from white supremacists despite repeated requests to clarify his position by moderator Chris Wallace of Fox News.

At one point, Trump urged the group Proud Boys – described by the Anti-Defamation League as being “Misogynistic, Islamophobic, transphobic and anti-immigration,” with “some members [espousing] white supremacist and anti-Semitic ideologies,” to “stand down and stand by.”

Simmons confirmed in a subsequent tweet that he is a Trump supporter.

Reaction on Twitter to Simmons’ tweets ranges from some urging the team to terminate his contract, others suggesting that as a high-profile athlete he should be given media training to help him understand his responsibilities, and rare messages of support.

The team itself has said it is taking the issue “very seriously” and that it will make a public statement “shortly.”

Pending that full statement, the team has said to a number of people expressing concern about Simmons’ tweets today that “Trek-Segafredo does not condone comments or actions from its riders that add to divisive conversations.”

It added: “The team will work with Quinn to help him understand the appropriate tone of conversation an athlete in his position should maintain.”

The 19 year old from Colorado signed for the UCI WorldTour team on a two-year contract after winning the junior road race at the world championships in Yorkshire last year, a title he still holds with the category not raced at this year’s event in Imola.

He was a key support rider in the team’s spring classics campaign earlier this year before the season was interrupted by the coronavirus pandemic, and earlier this month finished second overall at the Tour de Hongrie.

He raced the Fleche Wallonne today, coming home in 135th place, and according to Procyclingstats.com his forthcoming programme includes the three remaining Monuments of the season – Sunday’s Liege-Bastogne-Liege and, later in October, the Tour of Flanders and Paris-Roubaix.